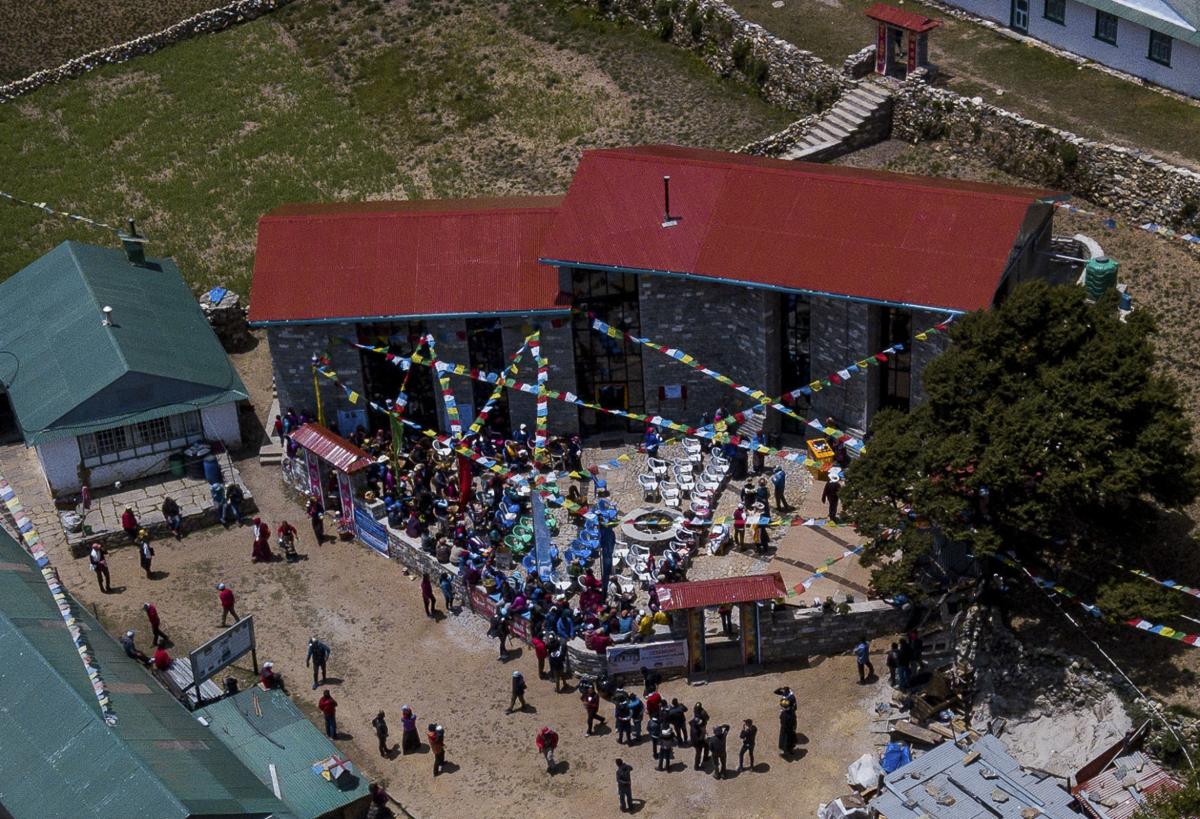 It took 12 years to design and build the two-story building for the Khumbu Climbing Center, which opened in June. 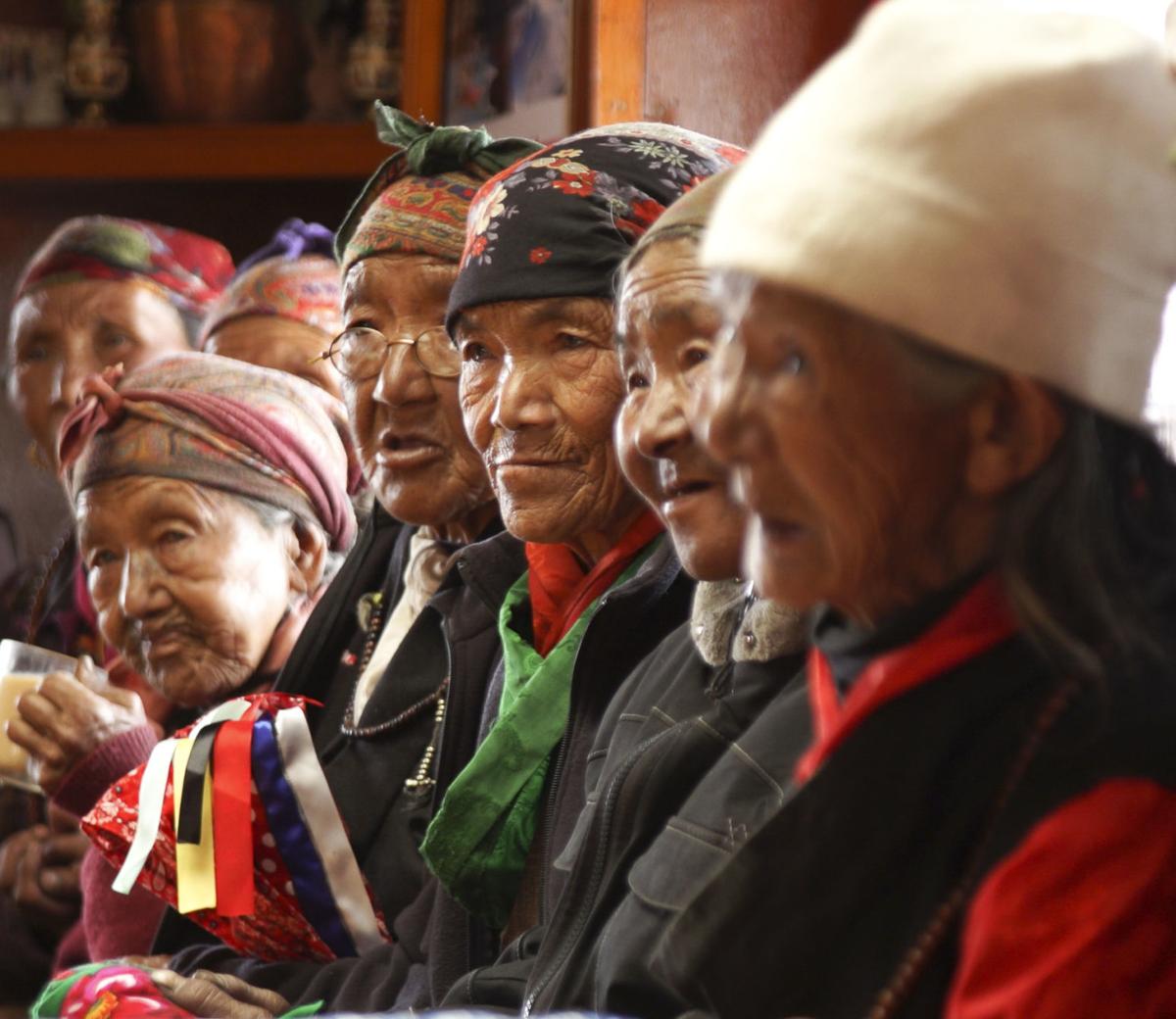 Elders in the village of Phortse, Nepal gather for a tea ceremony to celebrate the opening of the new Khumbu Climbing Center building, organized by Jennifer Lowe-Anker. Locals were asked for input on the design and construction of the building. 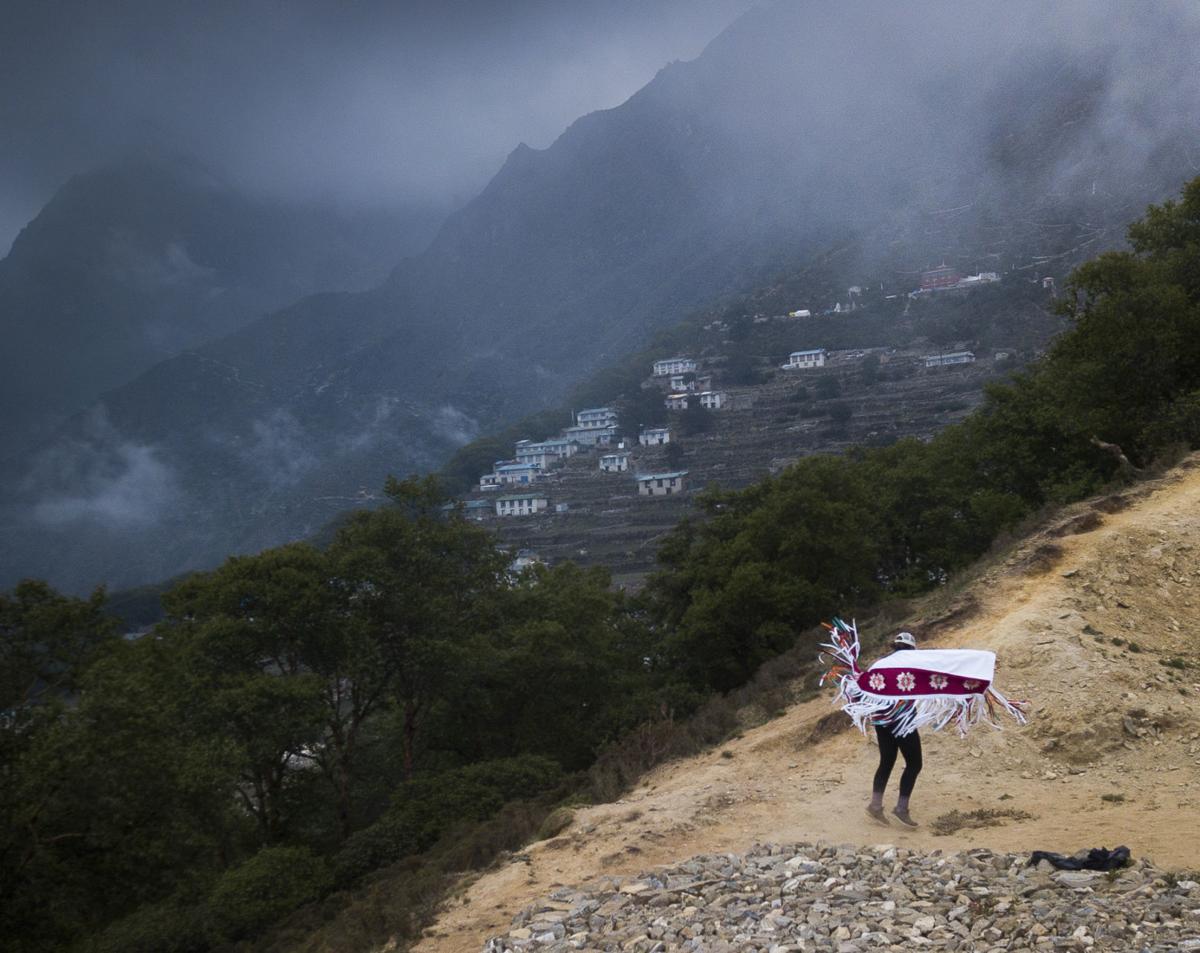 It took 12 years to design and build the two-story building for the Khumbu Climbing Center, which opened in June.

Elders in the village of Phortse, Nepal gather for a tea ceremony to celebrate the opening of the new Khumbu Climbing Center building, organized by Jennifer Lowe-Anker. Locals were asked for input on the design and construction of the building.

Mountaineer and trekking guide Amrit Ale was teaching a group of students about ice climbing near Phortse, Nepal, when a snowstorm arrived.

They were climbing a frozen waterfall and anchored in high off the ground. The air became frigid, and Ale needed his students to keep warm. So he asked them to start dancing.

Not just any kind of dancing, but a traditional Sherpa dance.

“I’ll never forget that moment, when we were trying to stay warm but also learning traditional culture,” Ale said.

Ale, 40, grew up west of Pokhara, Nepal at the foothills of the Himalayas. He’s been guiding mountain expeditions for 20 years and is certified by the North American Outdoor Leadership School.

A friend introduced him to the Khumbu Climbing Center, which was founded by Bozeman couple Jennifer Lowe-Anker and Conrad Anker. The center has trained hundreds of mountain guides, teaching them belay techniques, knot tying and how to use ice tools. He's now a lead instructor at the center.

The center started in 2003, and it's trained hundreds of mountain guides. Now, for the first time, it has a permanent home.

Jennifer, an artist and author, and Conrad, a professional climber with North Face, have been working to house the climbing center for the past 12 years.

On June 12, the building had its grand opening.The Khumbu Climbing Center building was a huge collaborative effort, Jennifer said.

The building has climbing walls inside and out. It has storage for gear and a medical clinic. But it’s also meant to be a gathering place for mountaineers and townspeople alike. The two-story building has a library and meeting space.

“We thought if we made it a community center, then the whole village could benefit from it,” Jennifer said.

The idea for the KCC stemmed from tragedy. Jennifer’s previous husband, Alex Lowe, was a world-renowned alpine climber. He died in an avalanche on a ski expedition in Tibet in 1999. Lowe and Conrad were best friends and on the trip together.

Conrad and Jennifer became close after Lowe’s death and later married. They took a trip to Phortse, Nepal together in 2002 for an expedition with Sherpa guides to the Mount Everest base camp. Along the way, the pair decided to do some ice climbing. The guides were fascinated watching the climb, Jennifer said.

The guides’ reaction inspired Jennifer and Conrad to give back to the locals.

“We thought to ourselves, this would be really cool way to introduce safe climbing techniques,” Jennifer said.

The need for safety in climbing has always been there, and it has only become more pressing. More and more people are attempting big climbs — like Mount Everest. The Nepali government issued more climbing permits for Everest this year than ever before. Technology has made it easier to climb the mountain in the last 50 years, but people still die doing it. In May 2019, 11 people died on the mountain.

The mission of the KCC is to “to increase the safety margin of Nepali climbers and high altitude workers by encouraging responsible climbing practices in a supportive and community-based program.”

Conrad said it’s a mission he really identifies with.

“For Jenni, experiencing the loss of Alex, she saw what it was like when a family member dies, so our goal was to make climbing safer,” Conrad said.

The couple held the first ever Khumbu Climbing Center symposium at a private lodge in 2003. Jennifer said 30 people participated, some dragging their feet.

That number doubled for the second symposium.

Now, the KCC has to cap enrollment at 80 students. It's a major effort for the nonprofit Jennifer started after her husband's death, the Alex Lowe Charitable Fund. Western and Nepali instructors work together to teach students climbing 101 skills, and how to be commercial guides.

All this was done without a permanent home.

Khumbu Climbing Center instructors first floated the idea of having a building for the center.

Jennifer and Conrad agreed. They chose to build in Phortse because it’s off the beaten path. But they'd need some help.

Conrad and Everts, the MSU architecture professor, met through a mutual friend. Everts was a practicing architect for 10 years in Chicago before moving to Bozeman with his family to teach.

When Everts took on the project, he knew he would focus on three main components of the building. Being in earthquake-prone Nepal, the design needed to protect the structure from seismic activity. Being at a high altitude, Everts needed to find a way to heat the building efficiently. He also wanted to be sure to include traditional Sherpa architecture.

Beginning in 2008, Everts had his graduate students start designing, which took years of studio work. In between, Everts made trips with students to Nepal to talk with locals in Phortse and the climbing instructors about what they needed. A few students made trips by themselves.

Each time, Everts had to justify to the university why students needed to travel.

Everts said one of the hardest challenges of the project was meshing ideas and plans between Western and Nepali builders. However, both were able to make compromises and Everts said the building ended up being “the best of both worlds.”

Building in a remote village at a high altitude brought a unique set of challenges.

Everts said they ordered insulated windows from Kathmandu, but they weren’t made properly. When the windows reached Phortse’s altitude, they shattered.

In 2015, a magnitude 7.8 earthquake hit the country, killing about 9,000 people and destroying more than 600,000 structures. Everts said the KCC building was only partially finished and did not have all of its quake-resistant features yet. It delayed the completion of the project.

With the delay and weather constraints, the project wasn't finished until four years later.

Locals planned a full-day celebration for June 12 that included traditional honoring ceremonies, a visit from Nepal’s minister of tourism and a chance to try out the building’s climbing wall.

The final product is a two story building made of stone bricks and huge windows that frame nearby mountains. It faces the sun and traps heat. And it’s the first public building in Phortse.

A large contingent from Montana traveled to Nepal for the grand opening. Among the group was Christopher Carter, a regional and urban planner and avid climber from Bozeman. He has worked as a climbing instructor for the Alex Lowe Charitable Fund in Mongolia and Nepal. He also works with the MSU Native Land Project that generates research in indigenous areas. He invited four Blackfeet tribal members to the KCC’s celebration.

Carter said bringing together native Sherpa and Blackfeet was a way to honor the first stewards of mountains in Nepal and Montana.

“If mountaineering can be a space (for culture exchange), that is a beautiful thing,” Carter said.

A Missoula high school senior, Mya Davis, 17, performed a traditional Blackfeet fancy dance at the celebration. She said she had to pick a shorter song because she was out of breath in the high altitude.

Davis said the people in Phortse were kind and welcoming, and she found many similarities between Sherpa and Blackfeet culture.

"Two days into it, I didn't feel like a guest anymore," Davis said.

Davis plans to return to the KCC next winter after she graduates high school.

Now that the celebration is over, and the Alex Lowe Charitable Foundation is looking at new projects, Jennifer said Westerners will take a step back from the KCC. Lead instructor Ale will take over the center. A local nurse will serve as the building’s librarian and begin organizing outreach programs. And Jennifer and Conrad will watch it grow from afar.

“The final piece of the puzzle is to have the Nepali community, the Sherpa community, and the Phortse community, take the reigns and make of it what they will,” Jennifer said.