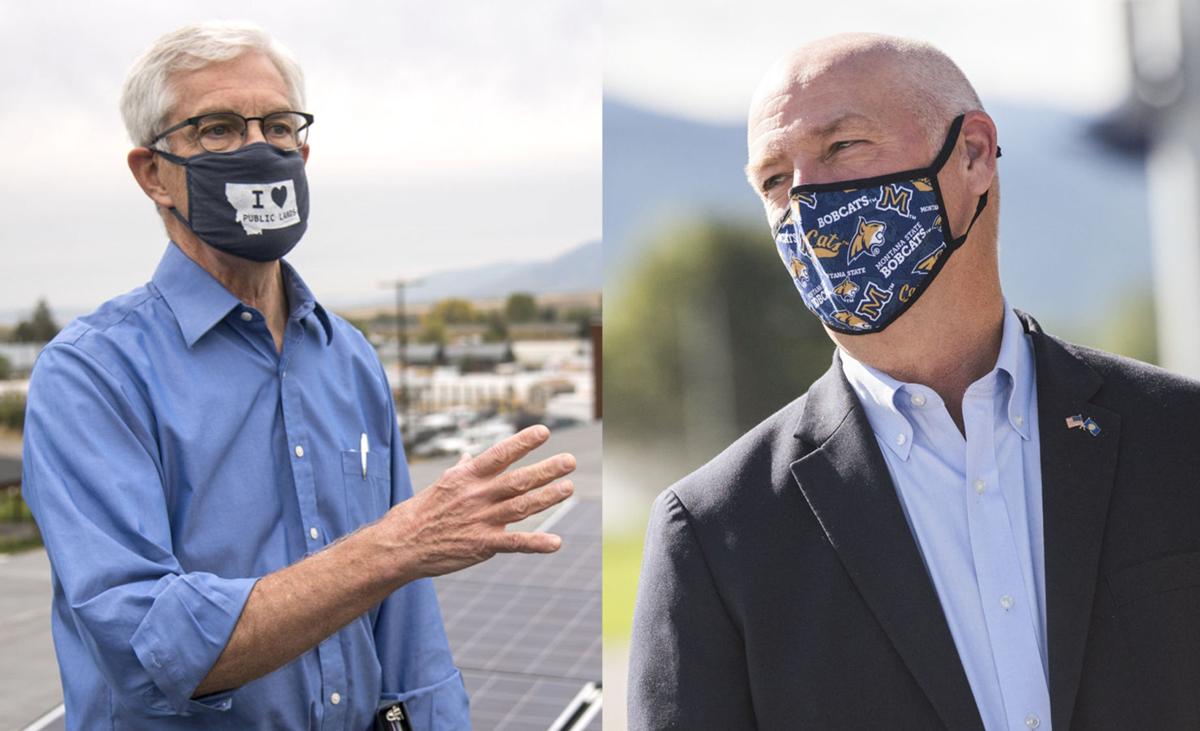 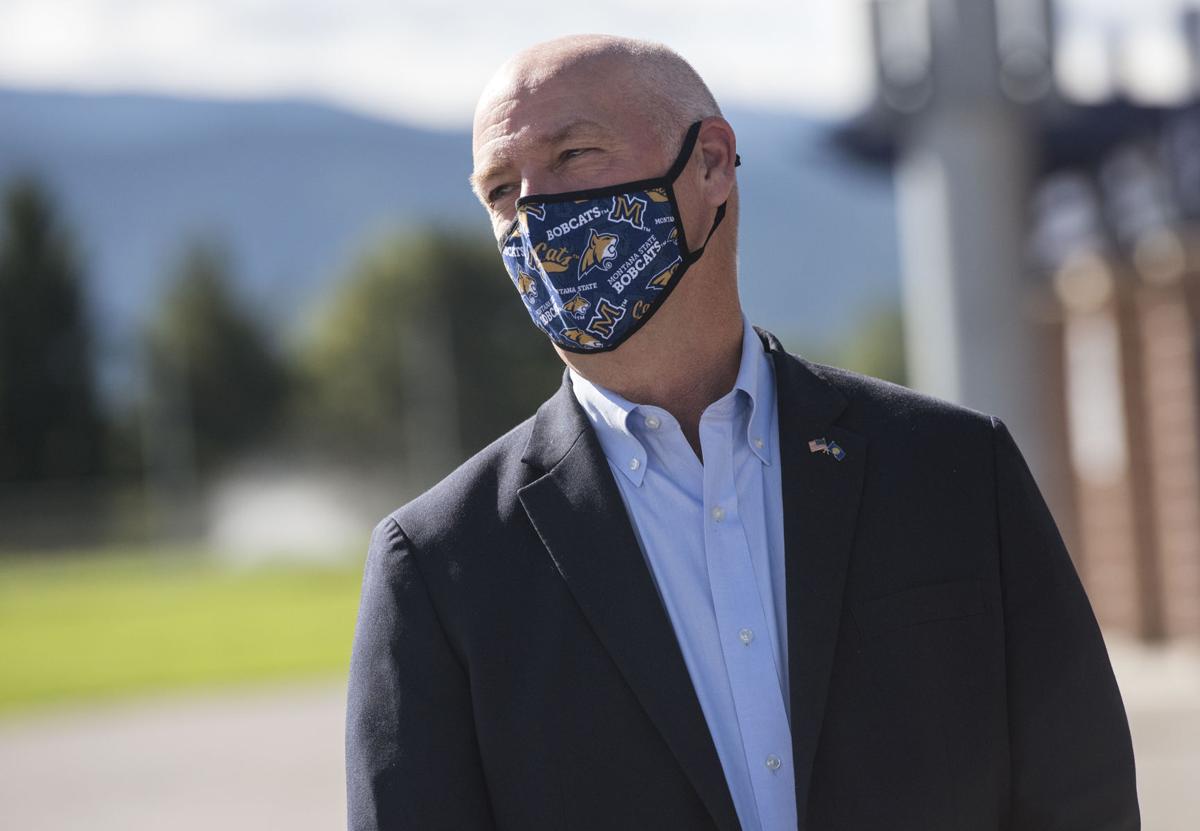 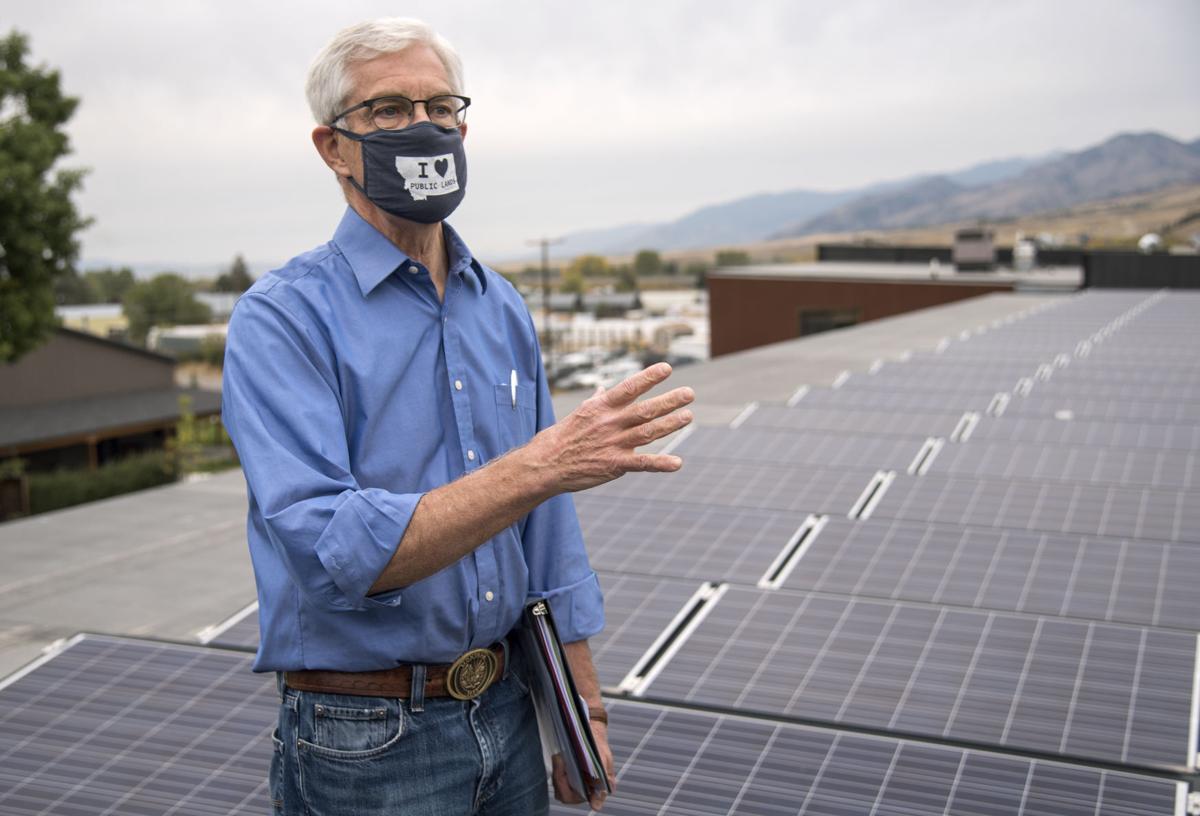 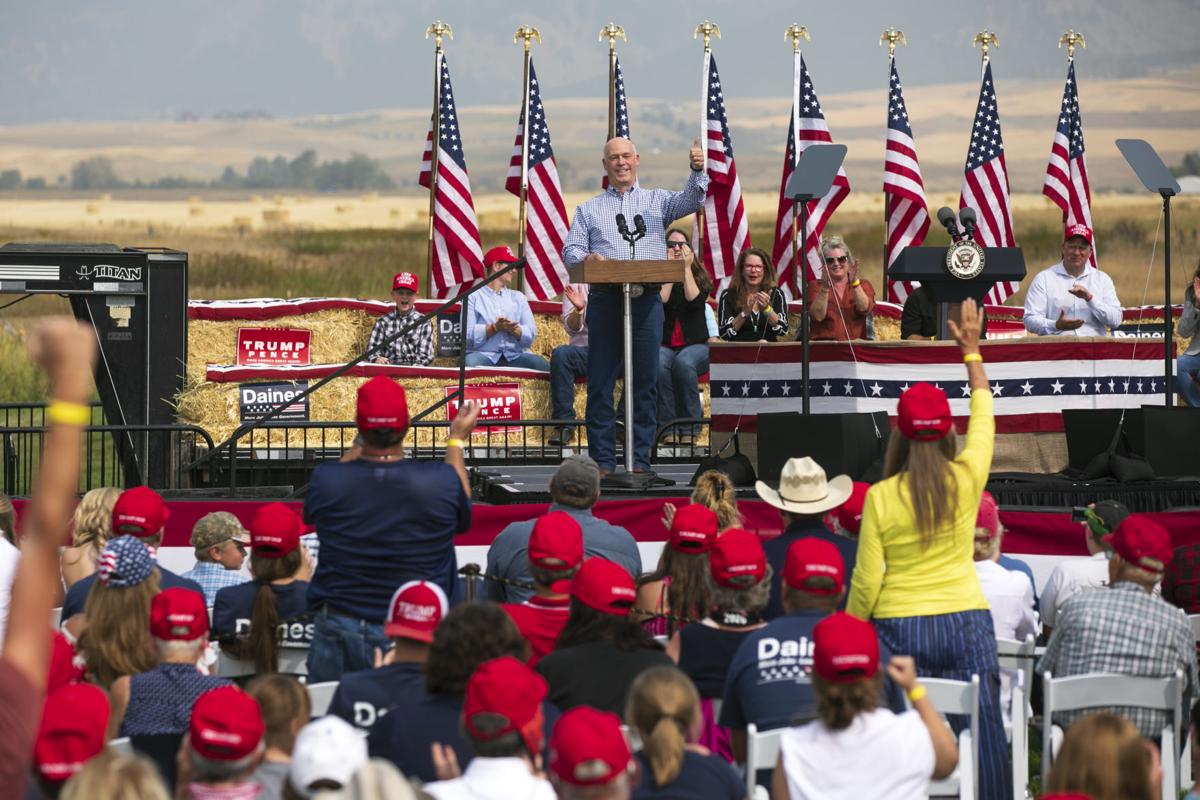 Gubernatorial candidate Greg Gianforte gives a thumbs up to a large crowd while giving a speech at a Montana GOP rally Monday, Sept. 14, 2020, at the Big Yellow Barn in Belgrade. 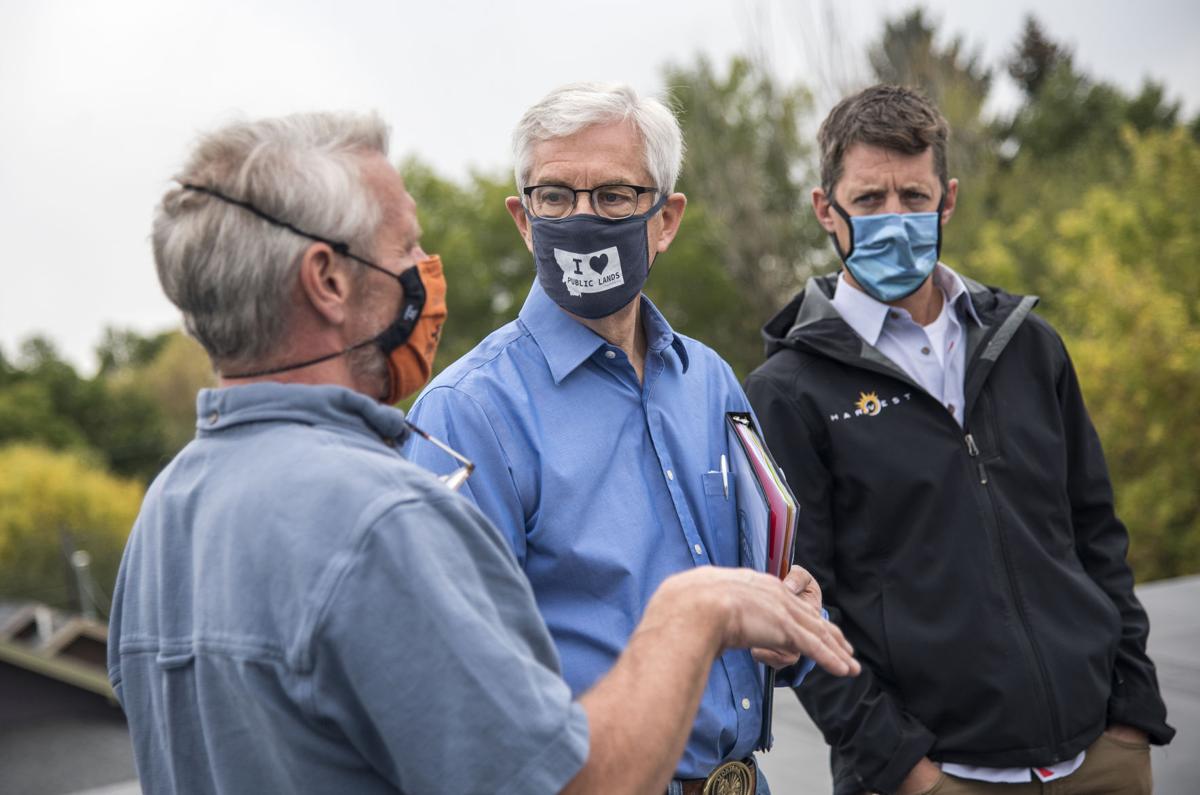 Mike Cooney, center, listens to Todd Scott, owner of Bozeman Brewing Co., as Scott explains his motivation for installing solar panels on the roof of his building during a tour on Friday, Sept. 25, 2020. On Friday Cooney released his Climate and Energy Plan.

Gubernatorial candidate Greg Gianforte gives a thumbs up to a large crowd while giving a speech at a Montana GOP rally Monday, Sept. 14, 2020, at the Big Yellow Barn in Belgrade.

Mike Cooney, center, listens to Todd Scott, owner of Bozeman Brewing Co., as Scott explains his motivation for installing solar panels on the roof of his building during a tour on Friday, Sept. 25, 2020. On Friday Cooney released his Climate and Energy Plan.

When Rep. Greg Gianforte took the stage during a rally with Vice President Mike Pence in Belgrade last month, he touted his work launching RightNow Technologies in Bozeman as the kind of experience needed to lead Montana through the economic challenges stemming from the coronavirus pandemic.

“You know I’ve spent my life creating jobs, solving problems and serving others,” Gianforte said. “That’s what I had to do, and that’s what I’ll do as your next governor.”

Gianforte’s opponent, Lt. Gov. Mike Cooney, is taking a different approach, vowing to build on the successes of the Bullock administration and to use his background in state government to guide Montana’s economic recovery.

“I have had the privilege of serving the people of Montana for most of my adult life and I am very proud of the service I’ve done for the people,” said Cooney, a Democrat, after a campaign event last week at Bozeman Brewing Company. “… Knowing how government works (and) understanding how to bring people together is very important when you’re leading a state.”

Gianforte has a slight lead over Cooney. A September poll from Siena College and The New York Times reported 45% of voters favored Gianforte, 39% favored Cooney and 4% backed Libertarian Lyman Bishop. By mid-September, Gianforte had outraised Cooney $3.3 million to $2.5 million overall. Gianforte had also given his campaign about $3.5 million.

With the election only a month away, there is still time for the race to change, said Jeremy Johnson, associate professor of political science at Carroll College.

“Gianforte has been able to get ahead, but we do have time before the election especially because people generally don’t tune into the state races until closer to November,” Johnson said.

Gianforte and his wife, Susan, started RightNow Technologies in 1997 and sold the company to Oracle in 2011, a fact he often brings up on the campaign trail. Gianforte ran for governor in 2016 and lost to Bullock. He went on to secure Montana’s lone U.S. House seat in 2017 and won reelection the following year.

Cooney has spent his career in state government. He was first elected as a state representative in 1976. He then served as Secretary of State for three terms. After a failed campaign for governor in 2000, he joined the state Senate for two terms during which time he served as Senate president. He subsequently worked for the Department of Labor and Industry before Bullock tapped him as lieutenant governor in 2016.

“Both candidates are running on the strengths of their biographies,” Johnson said. “Gianforte launched a successful business and Cooney is building on Bullock’s popularity.”

This summer, as Montana businesses reopened, Gianforte and Cooney each released plans that outlined their ideas on how to drive economic growth especially in light of the pandemic.

There were some similarities. Both candidates said they would invest in education and support apprenticeship programs to ensure Montana businesses can have access to the workforce they need. Both said they would expand broadband.

But there were also differences in the two plans.

Gianforte’s “Montana Comeback Plan” calls for reducing regulation to give businesses room to grow and to offer high-wage jobs.

“Having been a business guy myself, it’s hard enough to find customers and keep them happy when you also have to fight red tape and suffer under a heavy tax burden,” Gianforte said in a recent interview. “… I want to lessen the burden of government on small business so that we can create more good-paying jobs for all Montanans.”

He has also promised not to increase taxes. Instead, he said he would ask Montanans who have left the state for jobs to return and work remotely, expanding the state’s tax base and enabling the elimination of some taxes.

The “Montana Comeback Plan” focuses on bolstering the technology, agricultural and manufacturing sectors and further developing the state’s natural resources — coal, oil, gas and timber. Gianforte plans to appoint leaders to government agencies, including the Departments of Environmental Quality and Natural Resources and Conservation, who would speed up permitting processes.

Cooney’s “Keep Montana Working Plan” aims to improve the environment for businesses not by reducing regulation but by creating new regulations and government offices to assist businesses.

He also supports enacting laws that prioritize in-state hiring and contracting and that encourage state government to purchase products made in Montana.

Cooney said he has seen the government successfully partner with business on numerous occasions, including during the Bullock administration.

“Forty-six thousand jobs created in Montana in the last few years,” he said. “That’s a good start. I’m not going to declare victory and say, ‘That’s as good as we can do,’ but I’m saying it’s working.”

Unlike Gianforte, Cooney would like to transition away from fossil fuels and toward renewable energy. He would support regulations that make it easier for renewable energy companies to locate and operate in Montana and supports developing job programs that ensure a steady supply of trained workers.

“We don’t want to bury our head in the sand and say, ‘We’re just going to do it the old way and let somebody else take advantage of this new market that we see out there,’” he said.

In a recent interview, Cooney repeatedly said his ideas for growing the economy could only become a reality if the coronavirus pandemic is under control, a remark Bullock has also often made.

“You cannot build the economy if you don’t have a healthy citizenry,” Cooney said.

When businesses closed in March, thousands of Montanans lost their jobs or saw their hours reduced. With some residents bringing home smaller paychecks, it was uncertain what would happen to the state budget, which is largely comprised of income tax revenue.

Some Republican state lawmakers called for the governor to reduce spending to avoid a budget shortfall, while Bullock said he didn’t see a need to cut government services.

“I personally would have been a little more cautious on the spending side,” he said.

In an August press call, Bullock said the fiscal year ended with more revenue and fewer expenditures than had been anticipated, which allowed him to fill the state’s fire suppression account and the budget stabilization reserve account — or rainy day fund — to their statutory maximums while leaving more than $400 million in the state’s general fund.

“We have tried to be very cautious, very careful in our approach, and it has served us incredibly well,” Cooney said. “So working with the (state) Legislature, Republicans and Democrats, we built a budget that makes good sense and has some safeguards built into it and it’s put us in a good position as we’ve gone through this pandemic.”

The Legislative Fiscal Division, which tracks the budget separately from Bullock’s office, has projected the state budget will be stable over the next two years but has said there could be financial challenges beginning in 2023.

Given the uncertainty, Gianforte and Cooney both said the governor and Legislature would need to continue to monitor tax revenue and be cautious about spending. Both were clear they would not look to increase taxes given the economic challenges Montanans are facing but both said they didn’t think there would need to be significant budget cuts.

Gianforte pointed out that the state budget has grown over the last decade, which he said needs to be examined.

“What I think we ought to do is hold the line on new spending. That is stop the growth in spending,” he said. “Catch our breath. Let the economy catch up with us. And then as the economy gets started again, I want to use any surplus that we generate to reduce the tax burden for all Montanans.”

Cooney said during a public health crisis is not the time to reduce government services.

If elected, Cooney said he would like to revise the state’s capital gains tax, require wealthier residents to pay more income taxes and update the Montana tax code to reflect the state’s recent economic shift away from natural resource extraction.

“I will confess that this will probably be very a difficult task ahead of us because there are a lot of people in the (state) Legislature have signed a pledge that said, ‘No new taxes,’” he said. “Well, if you’re not even willing to talk about a new form of taxation one way or another, then how do you have a reasonable discussion about tax reform?”

“Increased taxes make it harder for small businesses to start and prosper,” he said. “And on a principle level, I don’t think you can tax your way to prosperity.”

The winner of the gubernatorial race could change the dynamics of Montana’s government.

It is likely that Republicans will continue to hold the majority in the Legislature, so if Gianforte becomes governor, Montana could have a unified Republican government for the first time in 16 years. If Cooney wins, he could play the role Bullock has played, acting as a counterweight to some Republican policies.

At the Pence rally, Gianforte promised to lift the roadblock Democratic leadership has created.

As he chatted with the owner of Bozeman Brewing Company last week, Cooney made clear he would further Bullock’s work.

“We are not doing business as usual now, so we still have a lot to do,” he said. “…We need to do everything to make sure Montanans are safe and healthy. As we do that, we can continue then to make progress in getting people back to work.”

Man charged for digging for treasure in historic Yellowstone cemetery

Man charged for digging for treasure in historic Yellowstone cemetery

Finding Melissa's voice: How travel helped me heal after my sister’s death