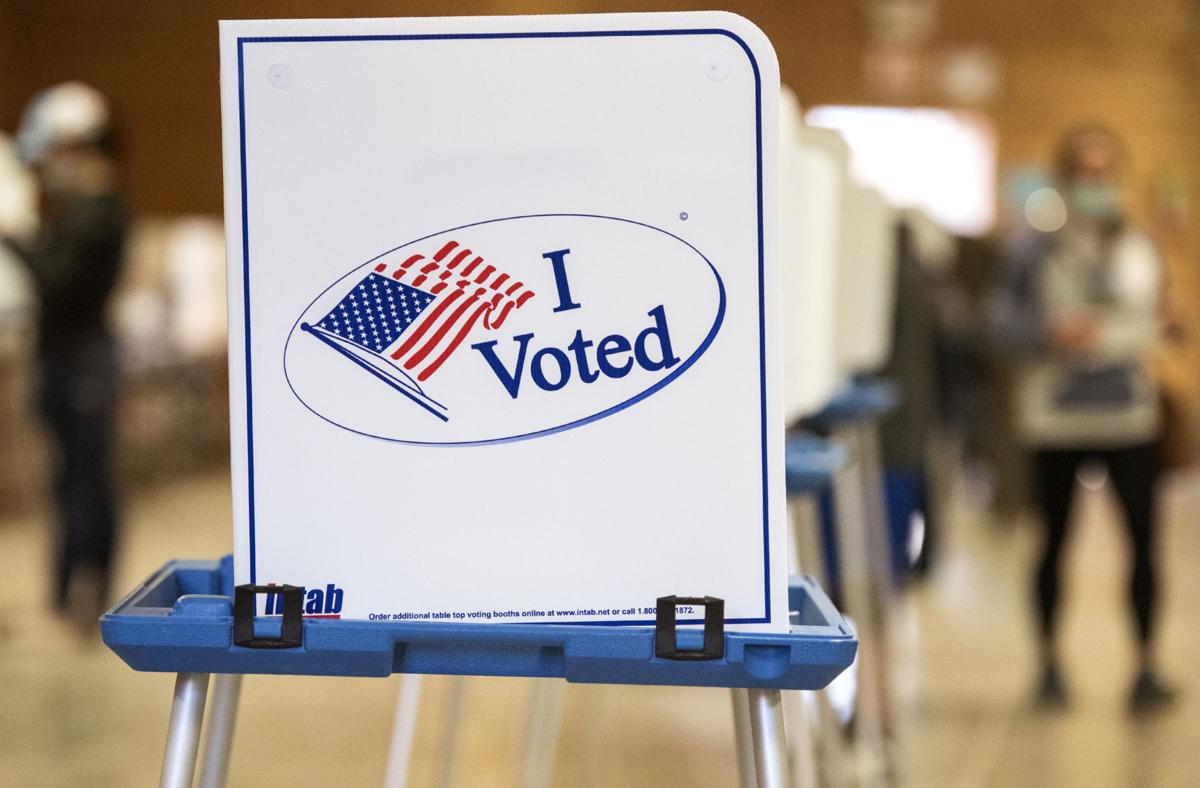 Voters fill out their ballots at the Gallatin County Fairgrounds on Tuesday, Nov. 3, 2020. 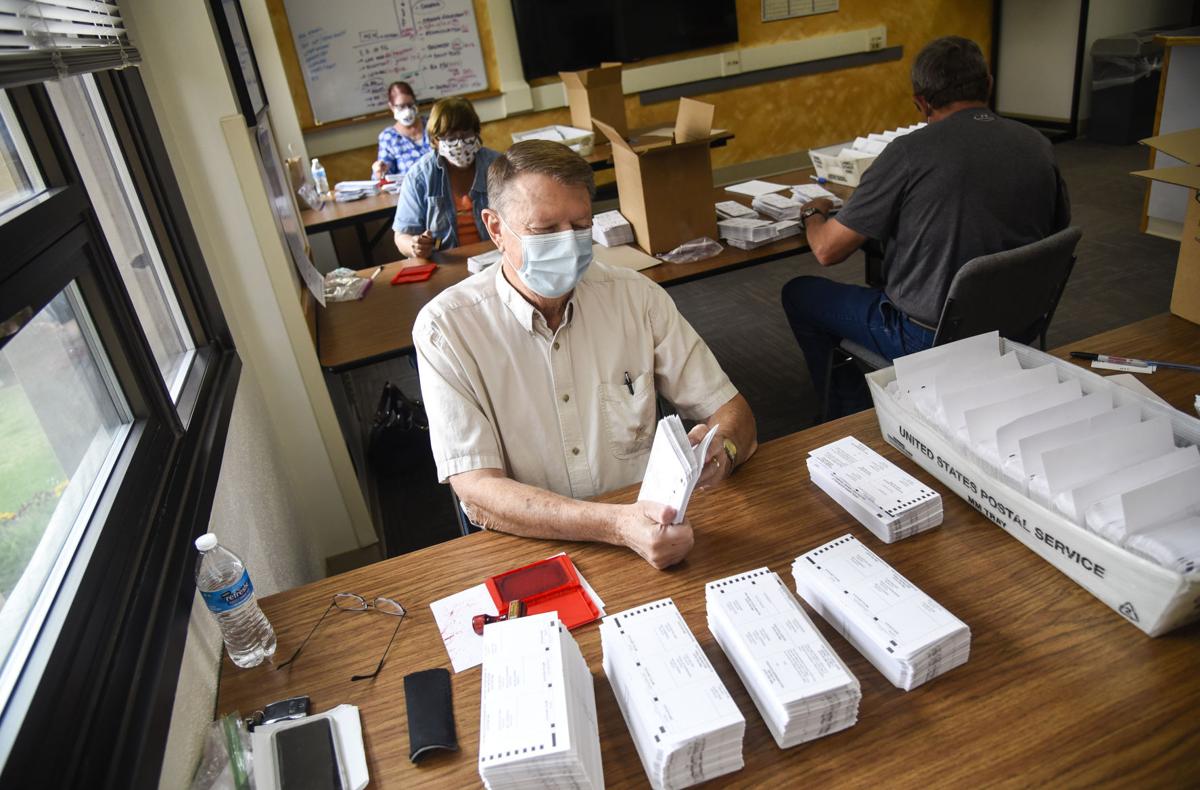 Scott Mullen stamps ballots on Sept. 17, 2020, in the Elections Office in the Gallatin County Courthouse. 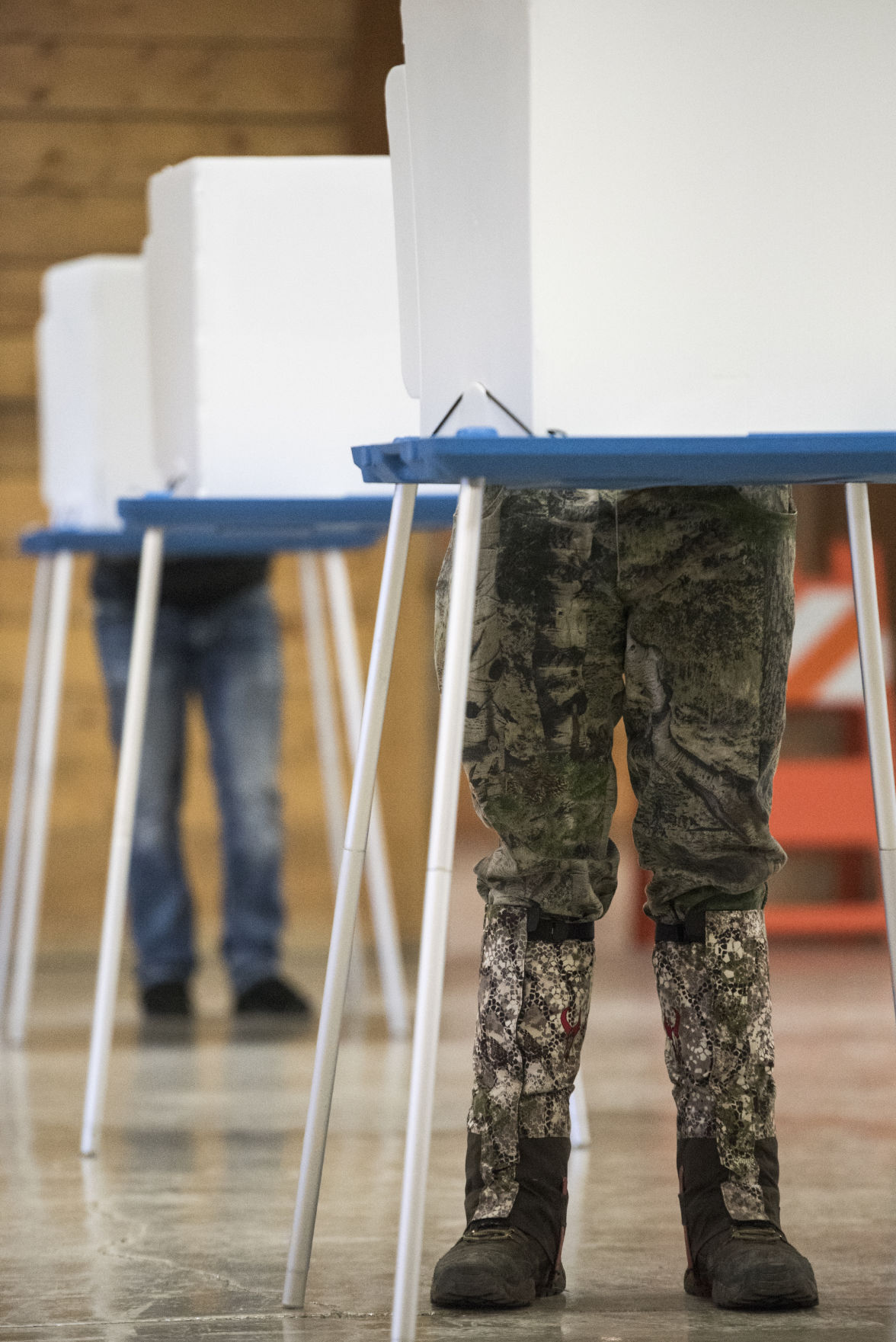 A voters dressed in full camouflage fills out a ballot at the Gallatin County Fairgrounds on Tuesday, Nov. 3, 2020. 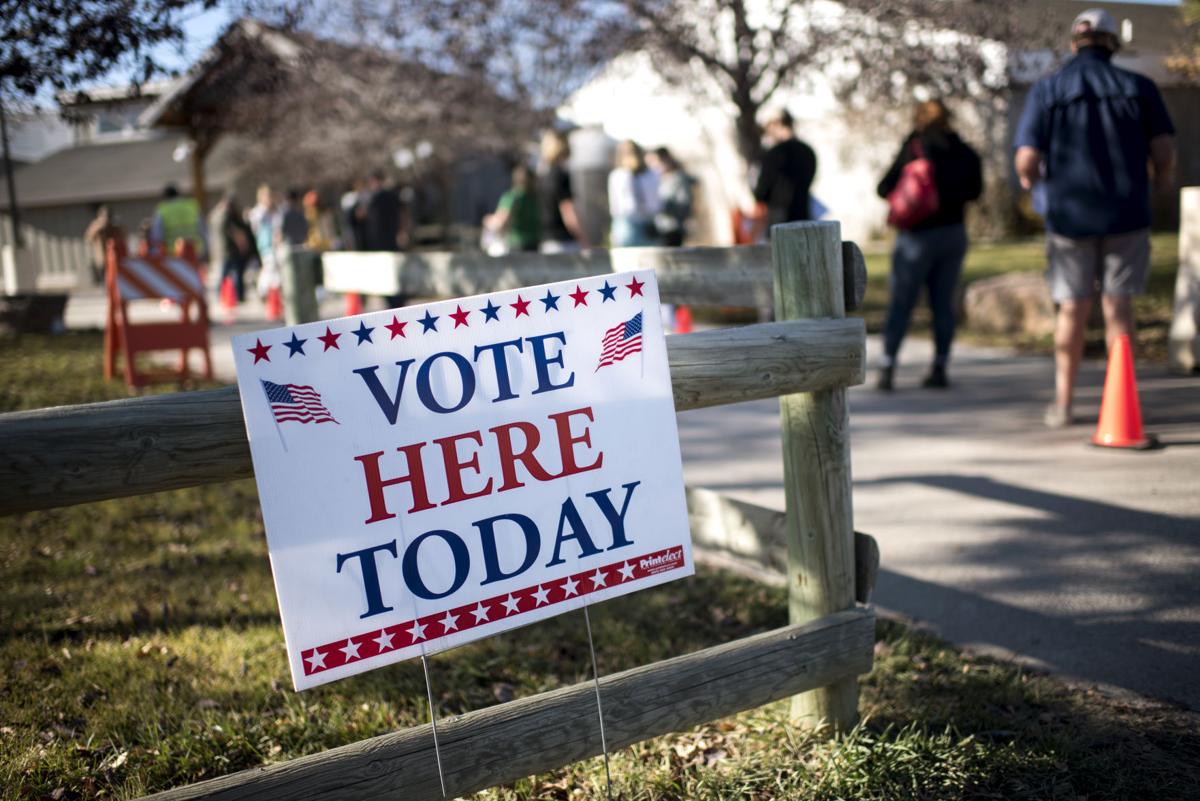 Voters wait in line to vote at the Gallatin County Fairgrounds on Tuesday. 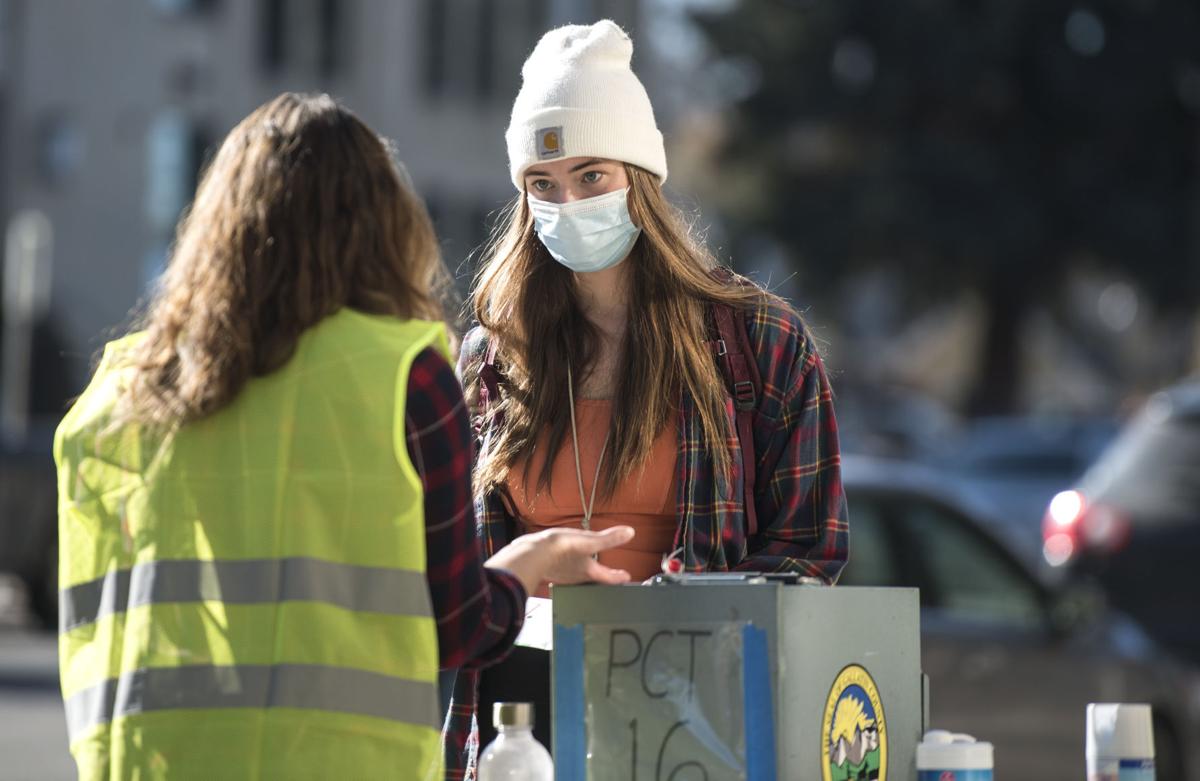 Election Official Teema Loeffelhoz helps voters cast their ballots at a ballot drop off on Tuesday, Nov. 3, 2020, outside of the Gallatin County Courthouse.

When Rep. Sharon Greef, R-Florence, addressed the Senate State Administration Committee in February, she called on her fellow state lawmakers to eliminate same-day voter registration and to close registration at noon the day before elections, which she said would ensure that every legitimate vote is counted.

“As I watched what was happening on the national scene and saw people doubting our whole election process, I just thought if there was anything I could bring that would assure that we have the best we possibly could have in terms of election integrity, that’s what I wanted to do,” Greef said in a recent interview.

Democratic lawmakers and some advocacy groups say just the opposite — that these same bills undermine the electoral process and could degrade a voting system that is already working.

Sen. Bryce Bennett, D-Missoula, is one of the most vocal opponents to election law changes like those included in Greef’s House Bill 176.

“Same-day registration is a fail-safe for our democracy, and this bill would throw away all the progress we’ve made to ensure people are voting,” he said. “The sponsor is being disingenuous about the bill because our election system is secure and there is no evidence of fraud.

House Bill 176, is among more than a dozen election-related proposals before the state Legislature this year. Several have been tabled, including one that would have made it harder to request and cast an absentee ballot. A handful died on Wednesday when they didn’t meet the deadline for being sent to their second chamber. A few are awaiting consideration during the second half of the legislative session, which begins Monday.

In Montana, then-Gov. Steve Bullock, a Democrat, allowed counties to hold all-mail elections due to the coronavirus pandemic. National Republican groups sued Bullock and then-Secretary of State Corey Stapleton, a Republican, claiming that the governor didn’t have the authority to alter the election format and that an all-mail election would lead to widespread fraud. The court dismissed the case, saying there was no evidence of voter fraud in Montana. Ultimately, the election saw record turnout and Republicans secured major victories.

Election integrity measures aren’t new in Montana or nationally, but the 2020 election has led to an increased focus on them in state Legislatures.

A February report from the Brennan Center for Justice, a law and policy institute, determined 33 states are considering 165 new laws aimed at tightening voting rules, up from about 35 such bills in 15 states at the same time last year.

House Bill 176, which the Senate State Administration Committee has yet to vote on, is one of those bills.

Sen. Mike Cuffe, R-Eureka, is carrying one of the two measures, Senate Bill 169, which would add new restrictions to the types of identifications required to cast a ballot.

“We want to feel comfortable that those voting in Montana elections are Montana citizens, not trying to exclude anybody,” Cuffe told the House State Administration Committee, which has yet to vote on whether to send the bill to the floor. “But we all want the same thing: fair and free elections that cannot be questioned due to the integrity of the people voting.”

Jacobsen, whose office declined to make her available for an interview, campaigned on the promise to expand voter identification requirements and has said Senate Bill 169 is her top legislative priority.

“Passing a voter ID law for Montana will protect the integrity of elections,” she told the House State Administration Committee. “Photo ID is already required for routine activities like traveling on a plane or replacing a cellphone. Photo ID should also be required to vote.”

Jacobsen is also supporting Senate Bill 170, which would require election administrators to review their voter registration lists annually instead of only in odd-numbered years. She told the House State Administration Committee, which recently passed the bill on a party-line vote, that there have been “alarming increases” in the number of ballots returned as undeliverable, meaning the voters’ information is likely inaccurate.

Rep. Mark Noland, R-Bigfork, has introduced another bill — House Bill 406 — that would revise rules for ballot collection, including by creating a state registry of those who turn in another person’s ballot. The bill modifies the Ballot Interference Prevention Act, which voters approved through a 2018 referendum and which was ruled as unconstitutional last year.

“We have the privilege to vote and the responsibility to vote, and in doing so, making sure that our ballots get collected appropriately,” Noland said on the House floor on Feb. 26. “...We are not trying to harm anyone. We’re not trying to shorten anybody having the ability to get their vote turned in.”

Several organizations, including the American Civil Liberties Union, Forward Montana, Western Native Voice and the Montana Public Interest Research Group, have criticized the Republican proposals to bolster election integrity. They have said the bills would make it harder to vote and would disproportionately and adversely impact young people, those with disabilities, low income voters and Native Americans.

Western Native Voice, a nonprofit focused on Native American empowerment, has been particularly vocal about the proposed changes to Montana’s voting system.

“The idea that there is rampant enough fraud in our election system that warrants these kinds of policies is undoubtedly a red herring,” he said. “...The idea of one person one vote has an equalizing effect on society and there is power in that. If there weren’t power in that, we wouldn’t see this effort to restrict the vote.”

Western Native Voice is also among the groups advocating for bills that would expand election access.

“Even before all of this, we were already dealing with a significant lack of turnout in general,” Perez said. “Adding more qualifications and obstacles will be detrimental to a system that should be equitable and available to everyone.”

The nonprofit worked with Rep. Sharon Stewart Peregoy, D-Crow Agency, on House Bill 613, which aimed to address barriers many Native Americans face when voting, including by establishing permanent satellite election offices on reservations.

“If you’ve been tracking what is going on in the Legislature this session, there are a number of voter suppression bills that are trying to undercut the rights of individuals. So this is a very important bill in the respect that it’s ensuring that our rights as citizens are not undercut,” Stewart Peregoy said at a press conference last week about the bill.

Like Stewart Peregoy, other Montana Democrats are pushing back on Republic-led efforts with their own bills.

Their work is also part of a national trend. The Brennan Center for Justice tallied that 37 state Legislatures have proposed 541 bills to expand voting access, up from 188 in 29 states as of a year ago.

The bills cited include House Bill 287, which would have required the state to pay for return postage for mail ballots. The bill was tabled in the House State Administration Committee. The sponsor, Rep. Kelly Kortum, D-Bozeman, said the bill would eliminate a barrier to voting and that record turnout in 2020 was likely due, in part, to the fact that return postage was provided.

Kortum also introduced a bill — House Bill 441 — that would have allowed 16 and 17 year olds to serve as election judges, which he said would help younger Montanans become engaged in the democratic process. The bill died on the House floor last week.

Bennett, the Missoula Democrat, has spent years working on election policy in the state Legislature and ran unsuccessfully for secretary of state in November. This session, he sponsored Senate Bill 107, which would have extended regular registration until 10 days before the election and which was tabled by the Senate State Administration Committee.

“I truly believe that everyone should be able to vote no matter their belief,” he said. “I don’t know why that is controversial.”