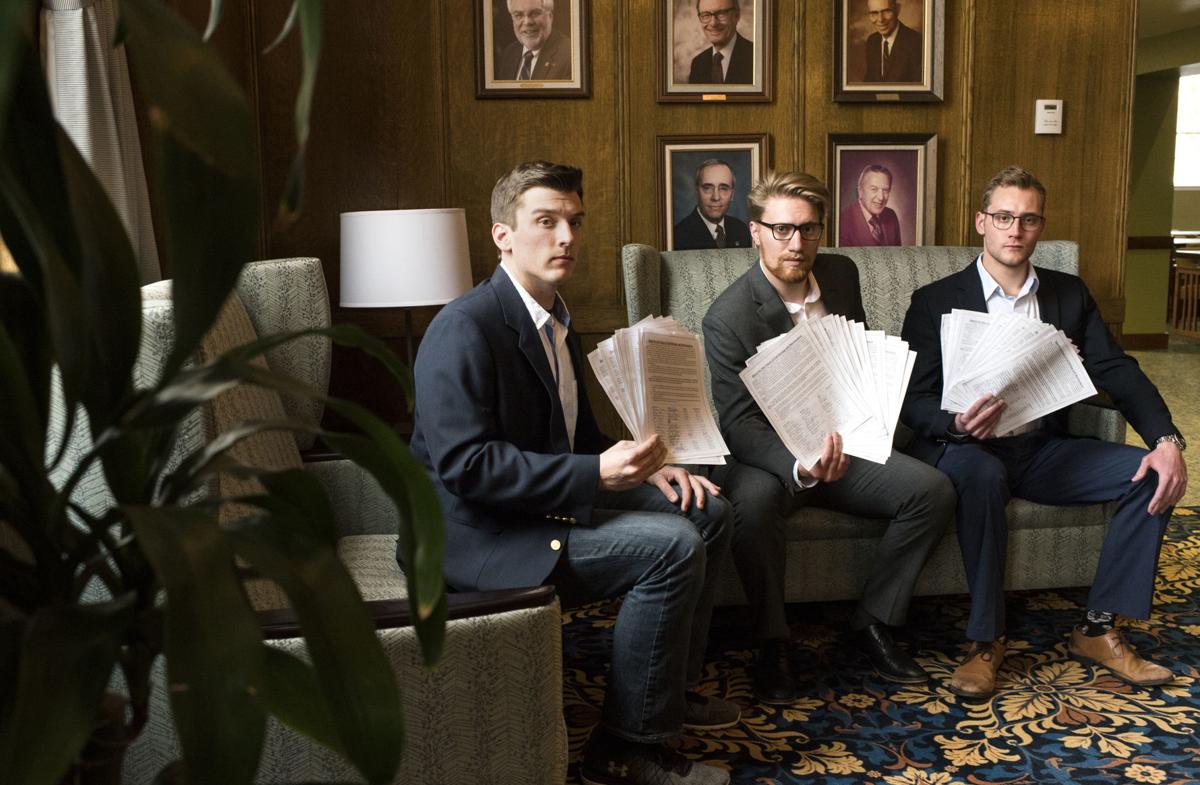 From left, Montana State University students Luke Channer, Colin King and Derek Hetherington pose for a photo with the petition they organized. 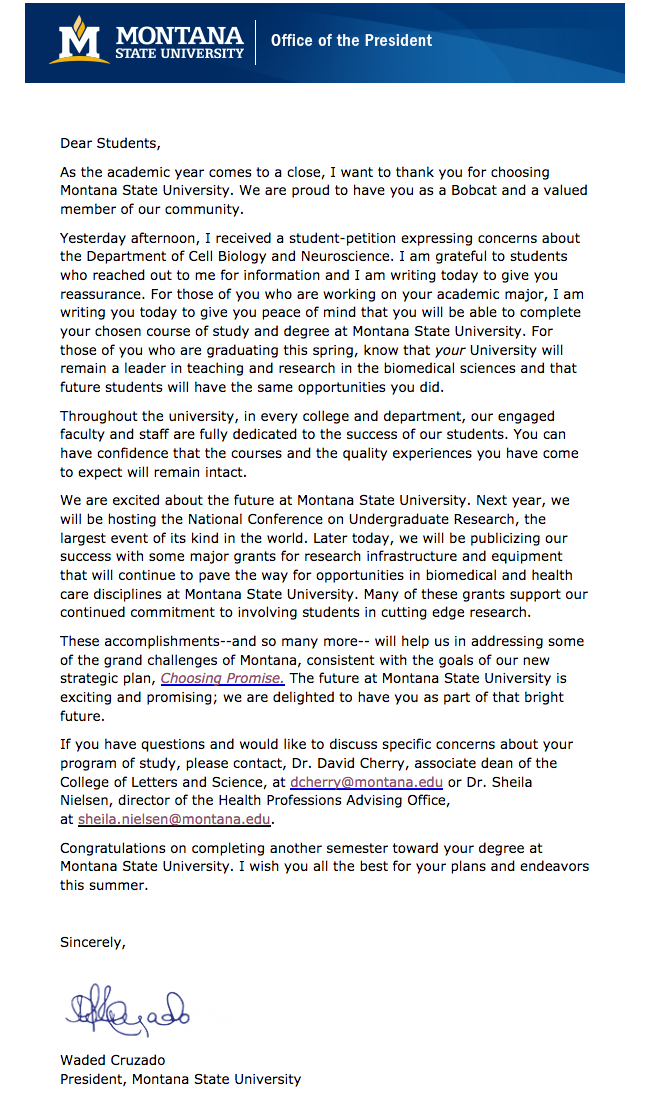 From left, Montana State University students Luke Channer, Colin King and Derek Hetherington pose for a photo with the petition they organized.

Students at Montana State University have delivered petitions with hundreds of signatures to administrators asking them to save the department of cell biology and neuroscience from a slow death.

The petition asks MSU administrators to avert “the possibility of the complete dissolution of the department.”

If cell biology and neuroscience disappears, the petition says, that would undermine the value of students’ degrees, hurt undergraduate research and harm MSU’s efforts to keep its national ranking as a “very high research” university.

“We thought a petition from hundreds of students would have more authority than the three of us,” said Derek Hetherington, 22, a senior from Bozeman who is about to graduate in cell biology and neuroscience.

“We’re not trying to cause trouble. We’re trying to stand up for and ensure the future of our department, and maintain the integrity and value of our degrees.”

The Chronicle requested the chance to interview Provost Bob Mokwa to hear MSU’s side of the issues. Instead MSU released a letter President Waded Cruzado wrote Tuesday to students.

“I am grateful to students who reached out to me for information and I am writing today to give you reassurance,” Cruzado wrote.

She said she wanted to give students working on the cell biology and neuroscience major “peace of mind that you will be able to complete your chosen course of study” and assure graduating students that “your University will remain a leader in teaching and research in the biomedical sciences and that future students will have the same opportunities you did.

“You can have confidence that the courses and the quality experiences you have come to expect will remain intact,” Cruzado wrote.

Controversy over cell biology and neuroscience first became public in January when then-department head Roger Bradley wrote an opinion column in the Bozeman Chronicle charging that administrators planned to cut out the department’s scientific research and turn it into a school focused just on teaching.

MSU responded then by saying that it has a strong commitment to research and that the real problem was that the department failed to live up to its own promises from years ago to expand its research and train more graduate students.

Provost Mokwa put the department’s master’s degree in moratorium and gave the department two years to turn around the Ph.D. program or else it too would be put in moratorium. Bradley kept his job as an associate professor but lost his department head position to an administrator with expertise in ancient Roman history, not brain science.

Despite reassurances that any changes wouldn’t hurt undergraduates, Colin King, 23, a senior from Belgrade, said he and other petitioners fear the negative publicity and threat of the department dissolving could make it impossible to get into medical school.

King said a friend interviewing at a medical school in another state “was asked point blank, ‘Why should we value your degree when your own institution doesn’t?’”

“That frankly terrifies me,” Hetherington said. He said the idea MSU floated last fall to replace the department with a “School of Human Biology” would be just “a degree factory” turning out students with “generic premed degrees.”

“Many students decide to choose MSU because of neuroscience and the opportunity to do research in labs,” said Luke Channer, 21, a junior from Corvallis.

The student petition asks MSU to hire quickly three tenure-track faculty members to fill vacancies and replace research professors who are leaving. If they’re not replaced, it will hurt the quality of education, Hetherington said.

If someone from another department fills in to teach outside their field, they’d essentially just be teaching from a textbook, King said. Working with professors who are active in research, he said, “has instilled a level of passion and excitement I would not get from a textbook.”

Hetherington said he is “passionate about neuroscience,” which studies the brain and nervous system. “It’s absolutely fascinating,” he said, “what makes us tick, what makes us human.”

The department also runs classes with human cadavers, which students said give undergrads a rare opportunity. Channer said that’s what got him interested in medicine. “It’s 100 percent different looking at a model and a body,” he said.

Hetherington said students gathered petition signatures because they haven’t been able to meet with anyone at Montana Hall who will tell them what MSU intends to do. Instead of transparency, he said, there has been “radio silence.”

The turmoil has already hurt the department, where the number of majors has slipped to around 285, down roughly 40 from last year, the students said.

When Montana University System campuses close down programs or majors, they generally assure students that majors already in the pipeline will be allowed to finish.

Thom Hughes, professor of cell biology and neuroscience, said he plans to leave or retire. He said his brain research has been funded by the National Institutes of Health since 1986.

The department’s problems are part of a bigger picture at MSU, Hughes argued. As MSU’s student enrollment has grown dramatically from 12,000 to 17,000 students, the university has failed to hire tenure-track faculty who do scientific research at the same fast pace, he charged.

“We grew by 40 percent and we didn’t grow the faculty, and they weren’t honest with the faculty or students about the ramifications,” Hughes said. “They’re going to backfill with adjuncts. That’s what they’ve done but never admitted it.”

“A neuroscience department run by a historian has no chance of ever hiring a neuroscientist,” Hughes said.

Frances Lefcort, professor of cell biology and neuroscience, said the department is in “total limbo.”

“I’m going to leave,” Lefcort said, though she hopes to keep doing brain research on her $2.9 million National Institutes of Health grant. “I can’t work in an environment that doesn’t support research.”

“We still have no clue,” she said. “The provost refuses to meet with us.”

Hughes and another key faculty member, “two of our rock stars,” are leaving, Lefcort said, and once they’re gone students may not get classes they need to graduate. Soon the department will be down from 10 faculty members to six or four, she said.

“Students came in good faith and MSU defaulted on its promise,” she said.

Adjuncts can be great instructors, but in sciences getting students working in labs is the way to really learn, she said. The college dean said MSU plans to use the adjunct model.

“They’re cheap, they’re on temporary contracts, they don’t have to have Ph.D.’s,” Lefcort said. “If you only use the model of adjuncts, you’re depriving Montana students of a first-rate education.

“They’re saying students in Montana don’t deserve the quality of education of the Ivies or Berkeley.”

Cruzado stressed that research is an important part of MSU’s future.

Next year the Bozeman campus will host the National Conference on Undergraduate Research, “the largest event of its kind in the world,” she said. MSU just won major grants for research infrastructure and equipment that will open opportunities in biomedical and health care disciplines at MSU, she added. “Many of these grants support our continued commitment to involving students in cutting edge research.”

The last time students petitioned to save a department was in 2010, shortly after Cruzado’s arrival, when 679 signed petitions and about 60 students politely carried signs outside Montana Hall that read “Save the Microbiology Department.” Soon after Cruzado overruled the acting provost and approved a three-year plan to turn around that department.