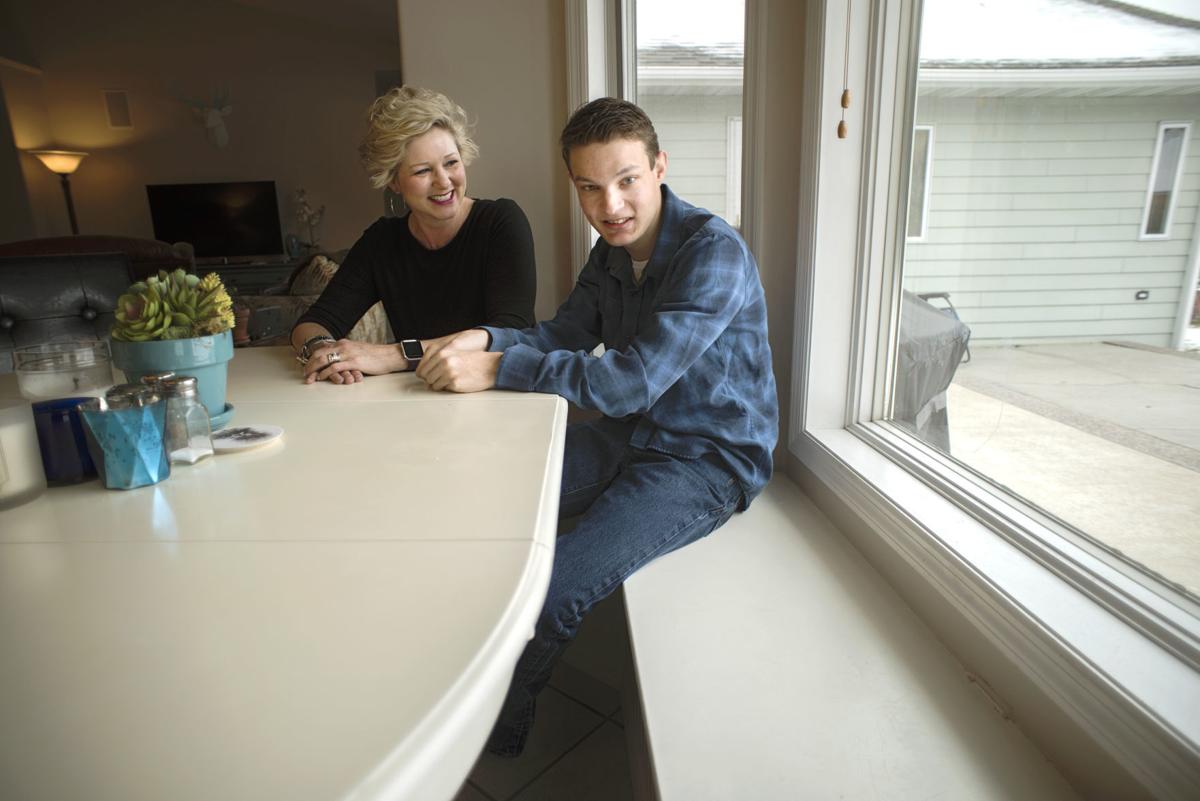 Derek Seymour, 20, right, says he helped his father make the bench he’s sitting on in his Four Corners home with his mother Kelly. 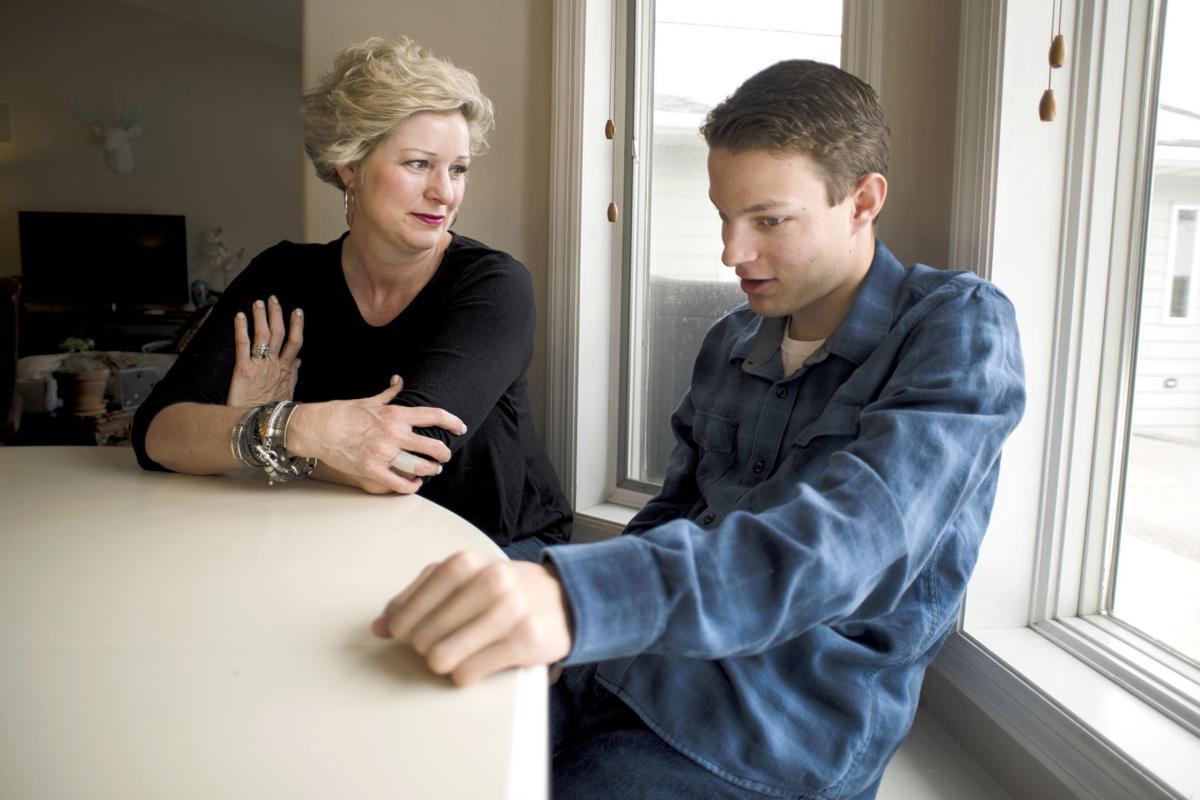 Derek Seymour, right, tells his mother Kelly he would like to take a job in the "building" industry or work at Murdoch's Ranch and Home Supply.

Derek Seymour, 20, right, says he helped his father make the bench he’s sitting on in his Four Corners home with his mother Kelly.

Derek Seymour, right, tells his mother Kelly he would like to take a job in the "building" industry or work at Murdoch's Ranch and Home Supply.

For years Montana students with Down syndrome and intellectual disabilities have faced a cruel reality when they graduate from high school at age 18.

They go from having a federally guaranteed free public education, to virtually nothing — except sitting for years on waiting lists for state services and job-training programs. They go from being surrounded by peers and teachers all day, to being largely isolated.

Parents have likened it to falling off a cliff.

“I’ve heard over and over that after they graduate, they graduate to their parents’ couch … to rot,” said Aly Ball, a Bozeman parent and president of SEPTA, the Special Education Parent Teacher Association. “It’s heart wrenching.”

Now Montana State University is launching a program offering new opportunity and hope to students with disabilities — the chance to go to college and learn job skills.

Called LIFE Scholars, for Learning Is For Everyone, it was announced last week at MSU’s Diversity Symposium.

The goal is not to earn a bachelor’s degree, but to let students audit classes, participate in college clubs and activities, get experience in job internships and build a more independent life.

Derek Seymour, 19, who graduated from Bozeman High School last June, and his mom, Kelly, are excited. Derek has the rare brain disorder Joubert syndrome. They don’t know if he would be selected as one of the half-dozen students in MSU’s first pilot class next fall, but they believe he will eventually get to go to college.

“It’s all he can talk about the last few days,” Kelly said.

Since graduating, Derek has been working at Riverside Country Club, helping in the kitchen and with parties. He skis and rides horses with Eagle Mount a few hours a week. He helps coach Special Olympics basketball and soccer teams. Yet Kelly feels he needs to do and learn more.

“He’s such a hard worker,” she said. He’d like to be around kids his own age, audit classes in agriculture, construction or cooking, and have a girlfriend. As a LIFE scholar, he would be part of campus life, she said, “not just on the outside looking in.”

Her eyes glistened as she talked about the “seasons of grieving” when a child has a disability. “As much as it’s painful to have a kid with special needs, you wouldn’t trade it for the world,” Kelly said. “He’s going to be an amazing student.”

Alison Harmon, dean of MSU’s College of Education, Health and Human Development, said the idea for LIFE Scholars started with Project Search, based at Bozeman Health Deaconess Hospital. It trained six students with disabilities a year in job skills — and included an internship in Harmon’s office.

It was funded for three years by the Taishoff Center for Inclusive Higher Education at Syracuse University. Syracuse created InclusiveU for students with intellectual and development disabilities, and it’s the model for MSU’s LIFE Scholars.

In 2004 there were only 25 such programs in the nation. Today there are 268, Harmon said, though many are limited to students with attention deficit disorders or, like the University of Montana’s MOSSAIC program, to students with autism.

“There are very, very few in this region,” Harmon said. “There’s a big need. Montana has no provision for education beyond 18 years — which every other state has.”

Ball said SEPTA has been lobbying the Legislature for six years to raise the age for educating special needs students from 18, without success.

MSU plans to open LIFE Scholars to students age 18 or older who have intellectual disabilities, have completed high school and have a strong desire to attend college.

Students can pick a four-year, two-year or one-year program. The final year would be devoted to internships and jobs skills.

Students would likely sign up to audit one to three classes per semester at MSU and Gallatin College. They would be eligible to wear a cap and gown at MSU’s graduation ceremonies, though they’d likely receive a certificate of completion, rather than a degree.

They would pay the same tuition and fees that typical students pay, plus a fee for the LIFE Scholars program. In a few years, students would have the chance to live in the dorms.

The LIFE Scholars program is estimated to cost $10,000 per student at the start, and tuition would likely cover about half of that, said Michael Becker, MSU spokesman. The EHHD College plans to cover the rest through grants, donations and university funds.

The New York Times reported that some skeptical professors have questioned whether such programs give a false sense of accomplishment, and end up costing taxpayers and parents more than less expensive vocational training.

Betsy Asserson, MSU director of counseling and psychological services and co-chair of the LIFE task force, said the program will help students like her 9-year-old son, who has Down syndrome, to learn job skills and find more meaningful work.

“It means a better future for Henry and for Montana,” she said.

Christy Sofianek led the three-year program at the hospital and now is LIFE Scholars coordinator. She’s excited to see MSU take on the program, saying it fits with MSU’s mission as a land-grant college to offer education to everyone.

She called Harmon “our champion … magical” for making it happen.

MSU will match LIFE students with peer tutors who can help them take notes and complete assignments, Sofianek said. Professors won’t have to change their assignments.

College is more than going to class, Sofianek said. Students learn life skills, have a chance to grow up, and learn from their peers.

“Shouldn’t we all have the opportunity to do that?” she asked.

Already families are contacting her to ask about signing up, Sofianek said. For more information, email christy.sofianek@montana.edu.