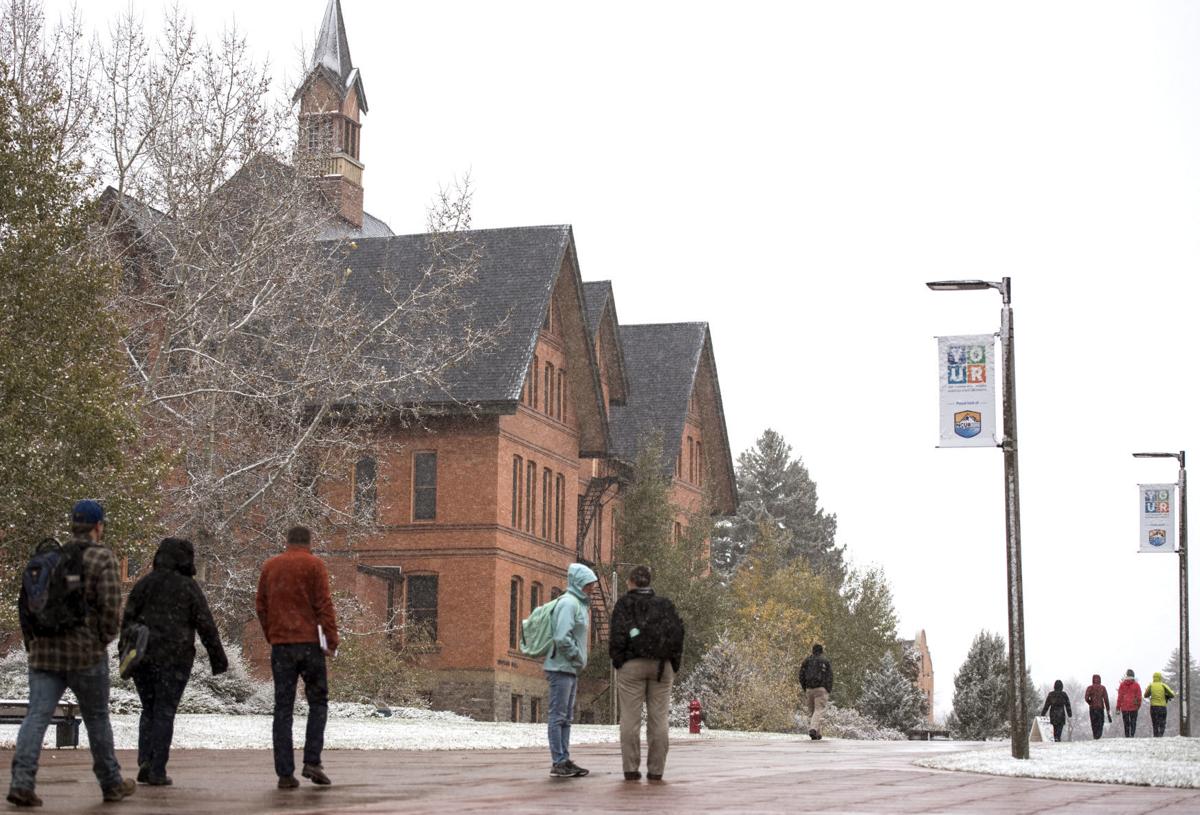 Students walk between classes through a steady snow in front of Montana Hall in this 2019 Chronicle file photo.

In this file photo, students walk past Montana Hall on the Montana State University campus.

Students walk between classes through a steady snow in front of Montana Hall in this 2019 Chronicle file photo.

In this file photo, students walk past Montana Hall on the Montana State University campus.

Montana’s commissioner of higher education is backing Montana State University and rejecting a call by faculty of the former Cell Biology and Neuroscience Department to investigate MSU’s merging of their department without Board of Regents approval.

The merger of CBN into the larger Microbiology and Immunology Department is on the agenda for the Board of Regents to ratify, six months after the fact, when the board meets in Bozeman on Thursday and Friday.

Normally a merger of academic departments wouldn’t attract much attention. But faculty members in the former CBN department have been publicly challenging MSU’s reorganization of their department since January.

In a rare move, three CBN professors had Bozeman attorney Tom Stonecipher write to the commissioner and regents asking for an investigation of MSU Provost Bob Mokwa’s decision to carry out the merger without getting the regents’ approval first.

The attorney’s letter argues that Board of Regents policy says the regents must approve forming, merging or eliminating schools or departments after the proposals go through a “level II” vetting process.

“Under Provost Mokwa’s leadership, MSU is doing exactly what the Board of Regents has asked all the campuses to do, which is to conduct an academic program prioritization process,” said the statement from Brock Tessman, deputy commissioner.

“MSU and Provost Mokwa have kept the Office of the Commissioner of Higher Education fully informed of each step taken, and the Regents have received public comment and written comment on this subject for the better part of a year.

“We are appreciative of Provost Mokwa’s deliberate, inclusive and transparent leadership in positioning CBN to be a more sustainable academic contributor among the many programs of excellence at MSU.”

Tracy Ellig, MSU vice president for communications, responded this week in an email, saying an investigation would be “pointless” because MSU had worked closely with the commissioner’s office.

MSU’s merger proposal tells the regents that consolidating CBN and its eight tenured faculty and two instructors with the successful MBI program and its 19 tenure-track faculty, 10 research faculty and instructors “will provide a stronger foundation for sustainability and future growth” for graduate students, undergraduates and research opportunities for students.

MSU prepared a PowerPoint report for the regents meeting to explain and defend the merger. It says that MSU acted at the request of the regents and commissioner to review all its doctoral programs so they could be strengthened and improved.

Mokwa announced the merger May 15.

“The most striking consequence of Provost Mokwa’s unapproved action was the almost immediate loss of half of the CBN tenure-track faculty, who either resigned their tenured positions or went on leave and are therefore no longer contributing to the education of CBN students,” the faculty’s attorney wrote.

Steve Stowers, a CBN associate professor, read the attorney’s letter to the Faculty Senate last week, charging that several fall CBN classes have been canceled, research opportunities for students have been cut and substitutes have been hired to teach fall classes who often had no training in neurosciences.

Students have been turned away who want to do research, and the CBN faculty members who remain will have a harder time seeking research grants and recruiting graduate students, Stowers alleged.

Ellig replied that all courses CBN students need for their degree are still available. “The degree is not only sustainable, but on track to be stronger than ever,” Ellig wrote, because of the merger with the successful and well-respected MBI department.

Ellig wrote that most CBN professors had the lowest teaching loads at MSU. There were faculty members who regularly taught only one course per year or less, supervised fewer than two graduate students and yet received salaries that were paid for by state and tuition dollars, Ellig wrote, which meant other faculty were effectively subsidizing “this underperforming department.”

Stowers replied that when research faculty members taught less than the usual two courses per year, it was because they were serving as department head or writing a major institutional grant at MSU’s request.

Despite the controversy, the CBN major is still offered and the fall 2019 registrar’s report lists 314 undergraduate majors. The major is especially popular with students interested in studying the brain and applying to medical school.

Though MSU criticized the CBN doctoral program, undergraduate CBN students collected more than 500 signatures last spring to defend it and several praised it for giving them a chance to do hands-on research and prepare for medical school.

Stowers’ defense of CBN argued that it was doing an outstanding job. He asserted its research grew to 25 grants worth over $10 million, its research spending was the highest per faculty member in the College of Letters & Science, that CBN faculty gave research training to more than 50 undergraduates and 12 grad students in recent years, and its students won prestigious Goldwater and Truman scholarships, and had a medical school acceptance rate 20% above the national average.

One CBN professor, Thom Hughes, charged to the Chronicle that MSU has been misleading the public and students about the loss of half CBN’s faculty members.

Ellig replied that faculty members who are on leave are still MSU employees, and they can’t be replaced with another hire as long as they hold their positions.

One point on which Ellig and Stowers agreed was that faculty members in the combined CBN and MBI department are “overwhelmingly supportive” of the merger.