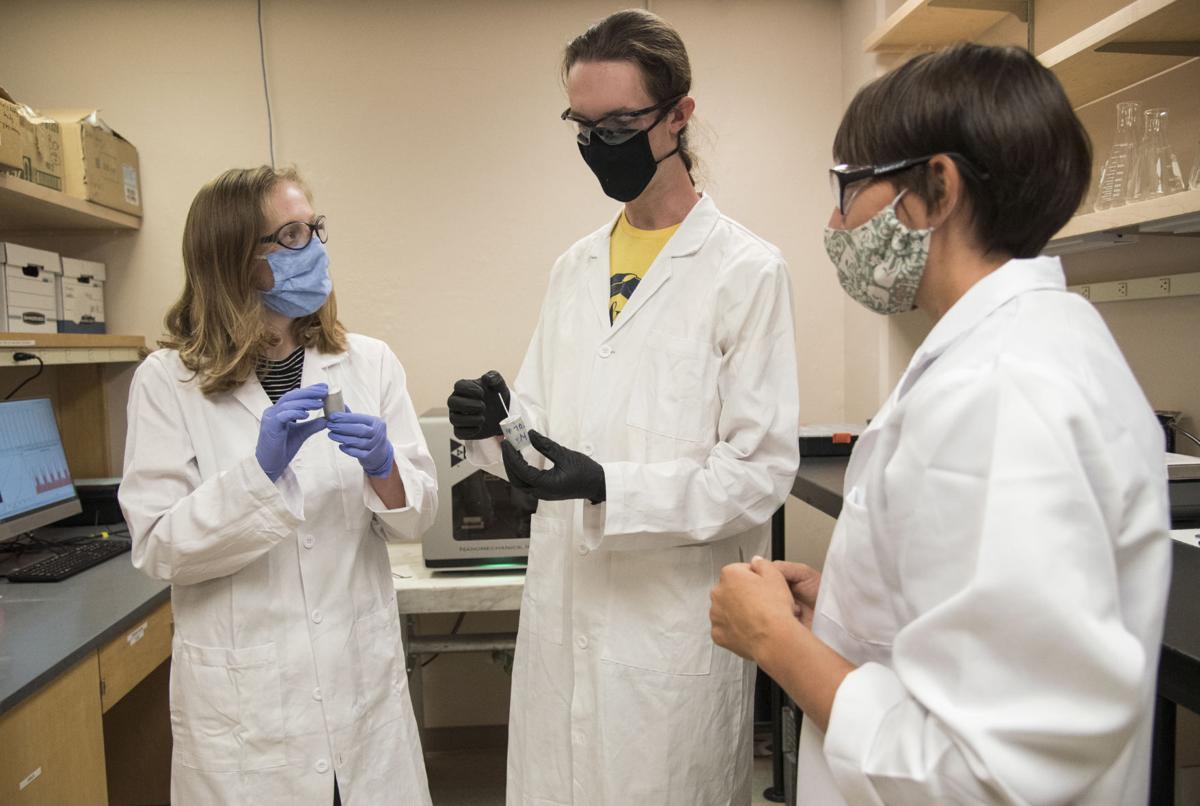 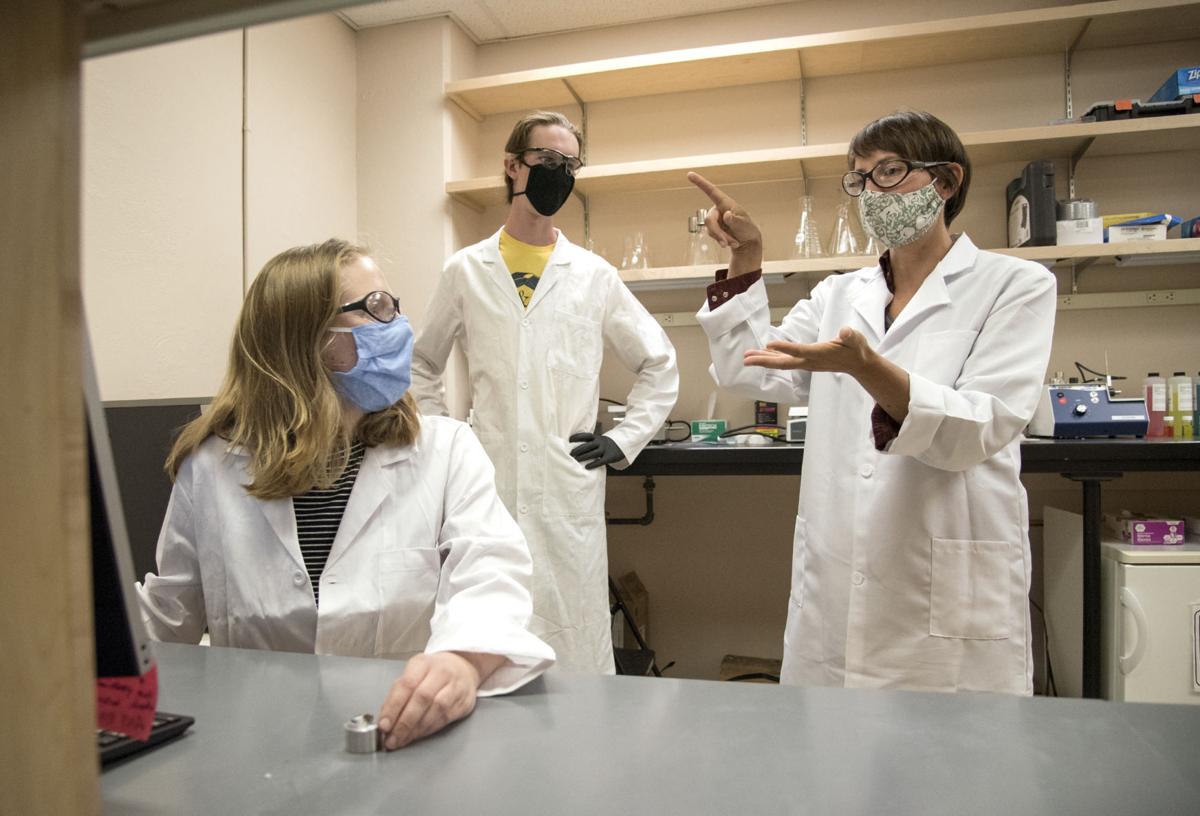 Cailin Casey, a Ph.D. student studying mechanical engineering, Atticus Cummings, a sophomore in the Honors College, and Assistant Professor Chelsea Heveran discuss a computer graph of the results from a test of the hardness and modulus of an insect's body on Wednesday, Sept. 2, 2020, in the Biochemics and Bio-Inspired Materials Lab. They are researching the material properties of an insect's body in hopes of discovering how insects are able to fly so efficiently.

Cailin Casey, a Ph.D. student studying mechanical engineering, Atticus Cummings, a sophomore in the Honors College, and Assistant Professor Chelsea Heveran discuss a computer graph of the results from a test of the hardness and modulus of an insect's body on Wednesday, Sept. 2, 2020, in the Biochemics and Bio-Inspired Materials Lab. They are researching the material properties of an insect's body in hopes of discovering how insects are able to fly so efficiently.

Montana State University set a record for research spending in the last fiscal year with $167 million in expenditures, the university announced Wednesday.

The record is an 8% increase from the previous record of $154 million, and the seventh year in a row that research spending topped $100 million.

“I think the continuous improvement in research expenditures is due to recruiting and retaining outstanding faculty,” said Jason Carter, MSU’s vice president for research, economic development and graduate education.

Carter said the university saw increases in the four research areas emphasized in its 2019 strategic plan — health and wellness, environment, food and food insecurity and state and national security.

The College of Agriculture reported the largest research spending with $44 million, a 4% increase from the previous year, according to the university. Both the College of Letters and Sciences and the Norm Asbjornson College of Engineering reported 9% increases from their expenditures the year prior.

“Faculty and funded researchers are stepping up in ways that are consistent with our strategic plan,” Carter said during a virtual University Council meeting Wednesday morning.

“It’s an incredible effort, and we’re on track,” she said.

The expenditures represent the money spent during the fiscal year, and does not necessarily include all of the new grant funding awarded in that year, according to Carter. He said there were a total of 1,268 grant proposals submitted the previous year, and $100 million in new grants awarded with time frames ranging from months to years.

Some of the research projects highlighted by the university include an engineering researcher’s proposal for exploring new recyclable and adaptable building materials; the Center for American Indian and Rural Health Equity’s work to reduce health disparities in Native and rural communities; and a professor from the College of Arts and Architecture photographing an Antarctic research crew retrieving the oldest-known ice samples on the planet.

Carter said the COVID-19 did have an impact in the research spending in the early months of the pandemic.

“We saw a downturn in research expenditures when we had to slow things down in March, but it rebounded in May and June,” he said.

The researchers and labs designed strategies to decrease the possible transmission of the virus and have kept logs of who enters for accurate contact tracing, Carter said.

Many faculty members and researchers also took the downtime in the beginning of the pandemic to write additional grants and apply for more funding, he said.

Along with the record research spending, the university continues to promote its Carnegie ranking as one of the universities nationwide with “very high research activity” — the top category and a point of pride for MSU.

It is the only university with the top ranking in Montana, Idaho, Wyoming, North Dakota and South Dakota, and one of 131 higher education institutes recognized nationwide, according to an MSU news release.

The university maintained that status from 2006 to 2015, until it was lowered to the middle category of “higher research activity.” It rejoined the top category in 2019 after a concerted effort by faculty and university administrators to prioritize the return.

Carter credited the university’s emphasis on research and its classification with Carnegie for its ability to pivot research personnel and expertise to partner with the Montana Department of Public Health and Human Services to expand coronavirus testing capacities.

“If there’s ever been a time having an R1 Carnegie designation matters, we’re seeing it now with COVID,” he said. “I think this is why having a research intensive university in Montana is beneficial to Montana.”