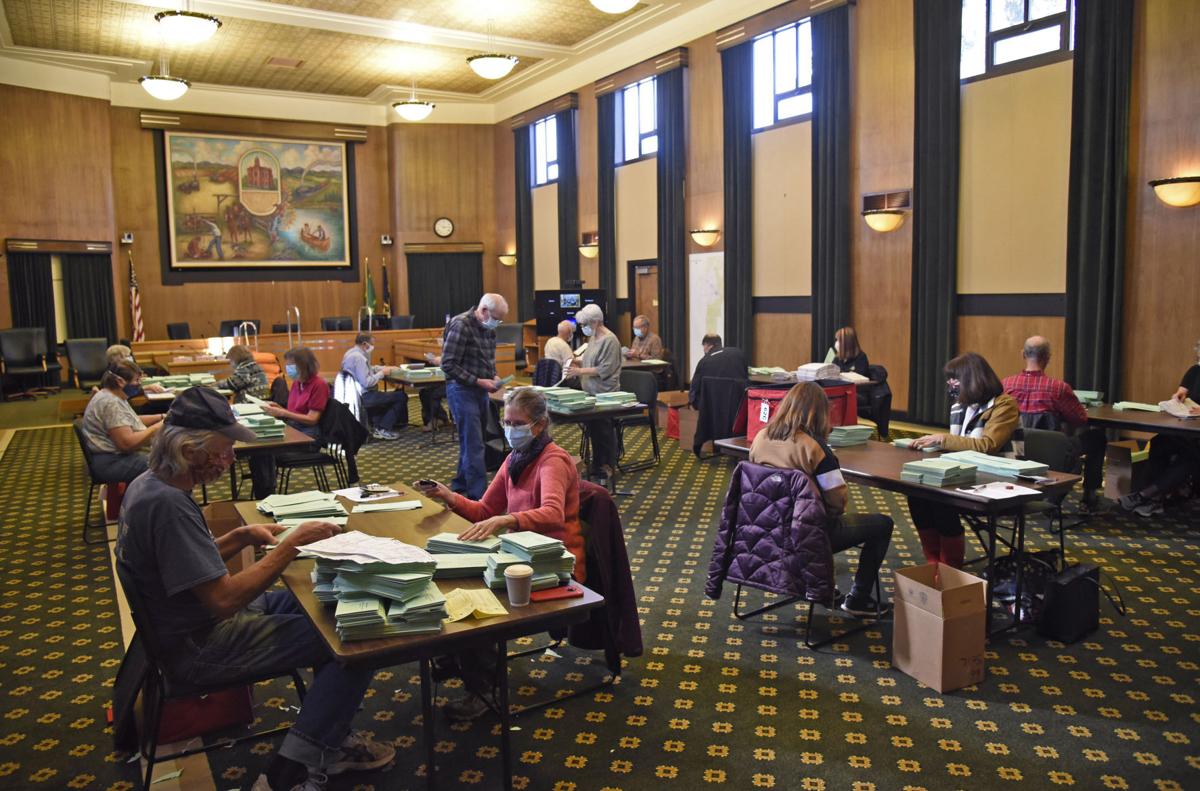 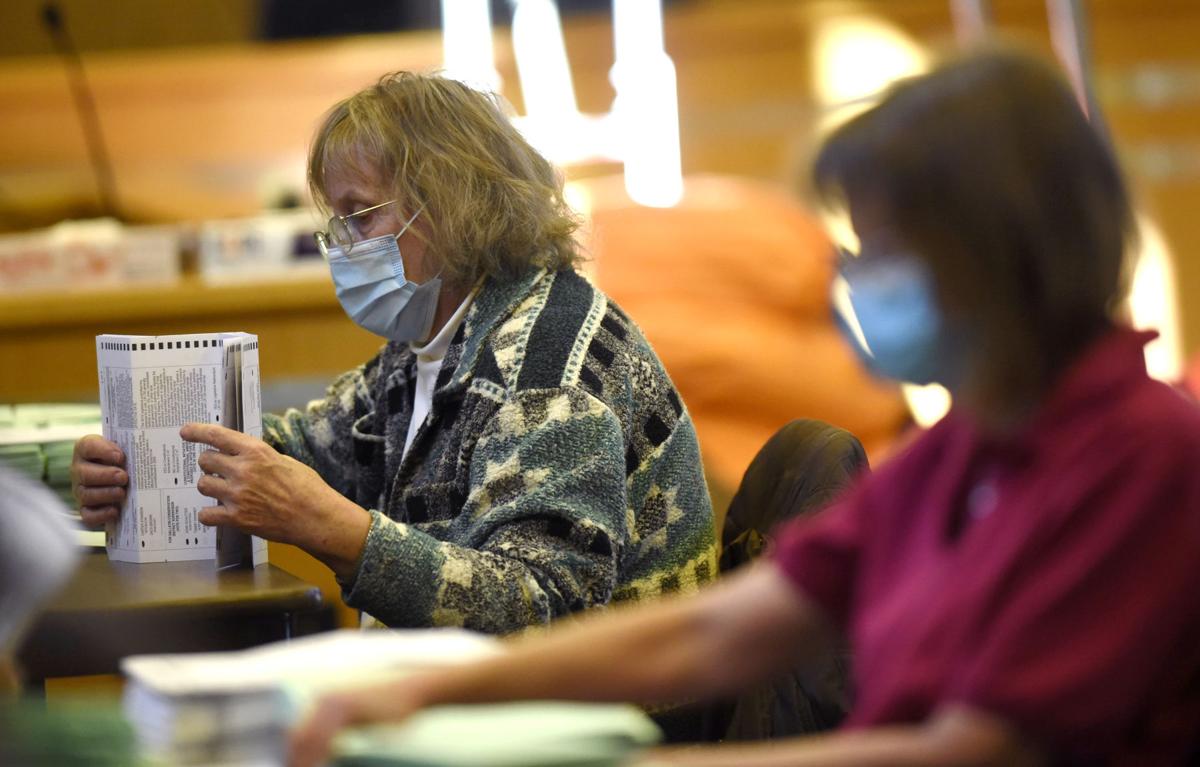 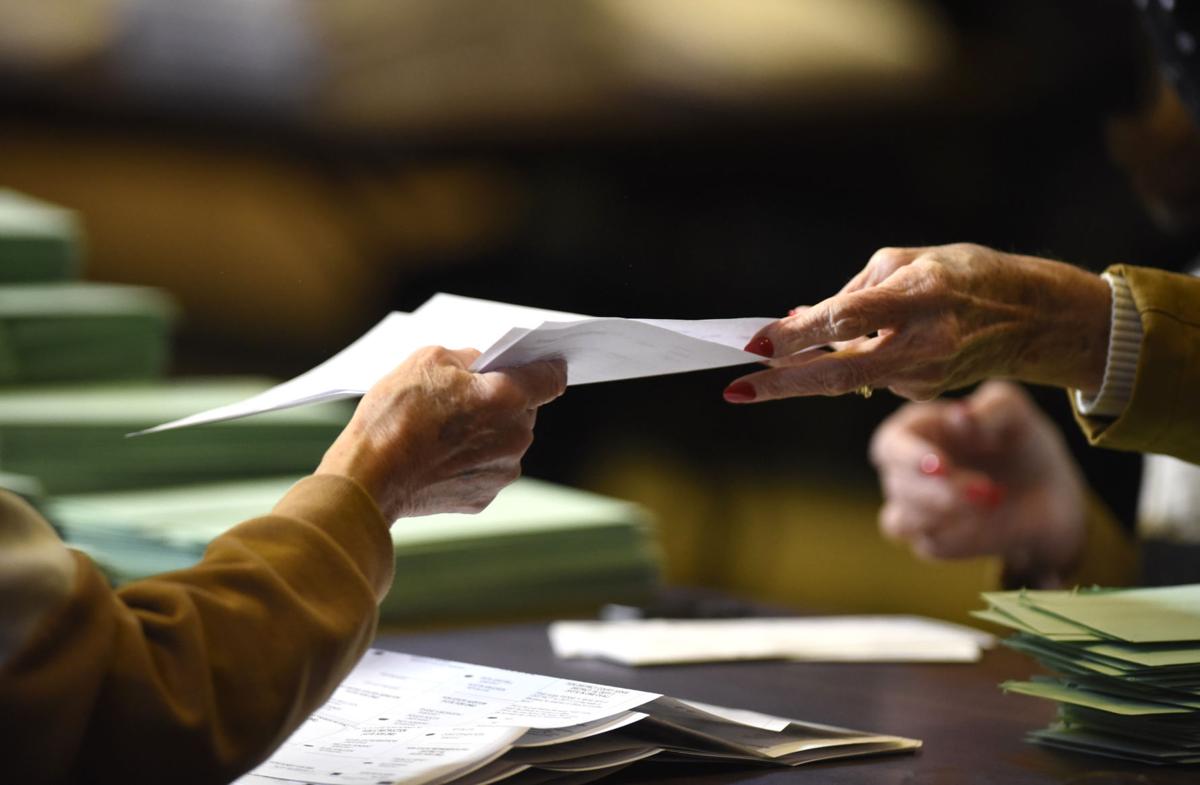 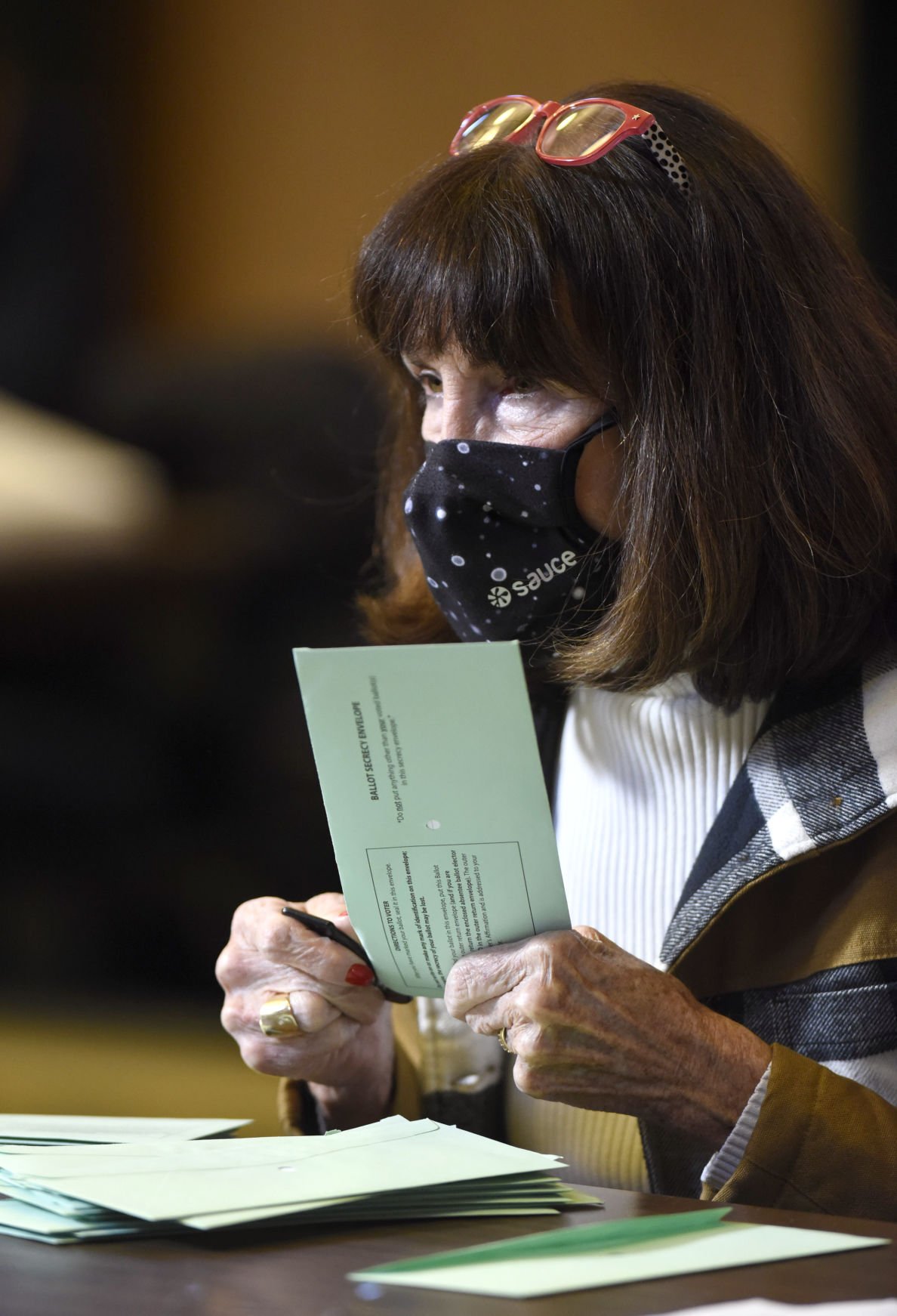 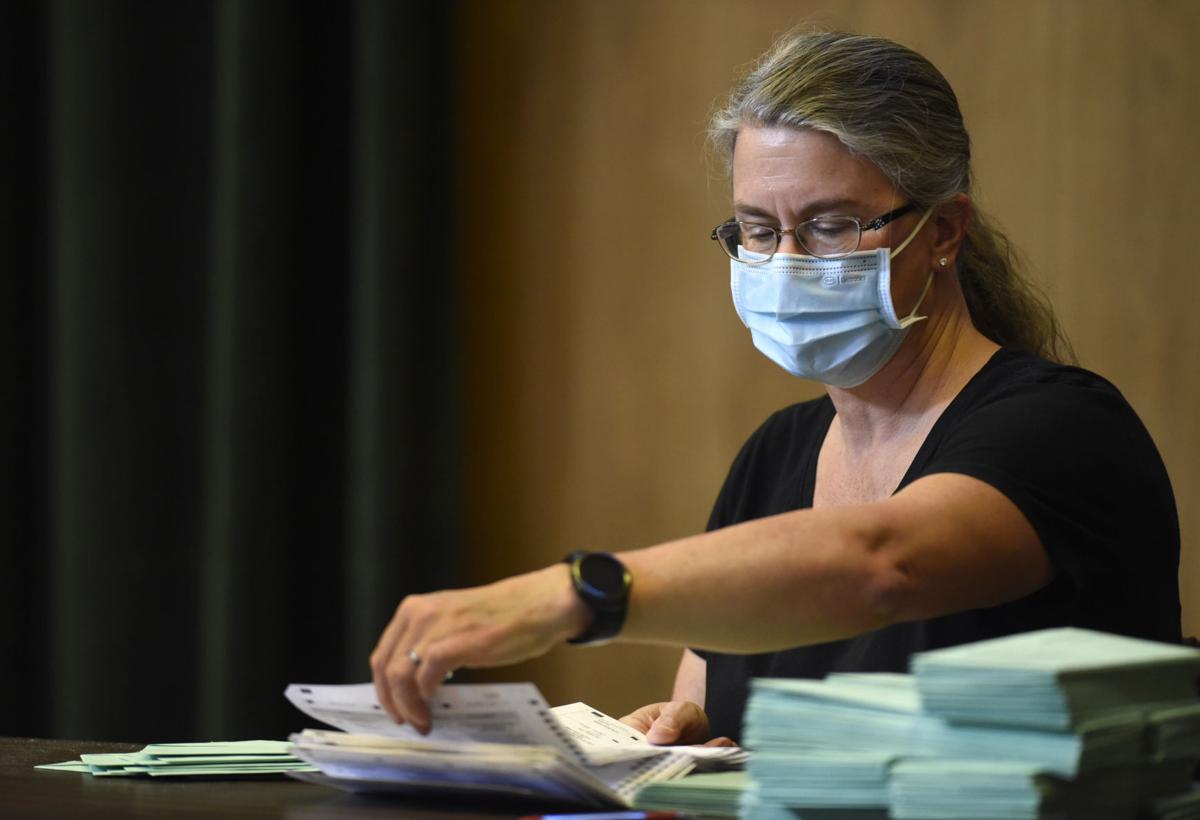 President Donald Trump may not have visited Montana this year, but he has still played a central role this campaign season.

He’s endorsed the Republican candidates for Senate, House and governor. His son campaigned with the candidates in Kalispell on Saturday. And the vice president hosted a rally with them in Belgrade in September.

Republican candidates have embraced him and his policies.

Meanwhile, their Democratic opponents have criticized his record and focused on issues they hope can attract a broad range of voters — health care, public lands and economic recovery. They have also avoided tying themselves to their national counterparts.

Tuesday's results will show which strategy was more effective.

The two strategies are particularly evident in the Senate contest, where incumbent Republican Sen. Steve Daines and Gov. Steve Bullock, a Democrat, are competing in a race that has broken campaign spending records in Montana and that could shift the balance of power in Washington, D.C.

In the last month alone, Daines has held a phone rally with Trump, campaigned with Nikki Haley, his former ambassador to the United Nations, and held a roundtable with northwest Montana business leaders in support of the Supreme Court appointment of Justice Amy Coney Barrett.

He has often pointed to his work with Trump on getting the Great American Outdoors Act, a landmark conservation bill, signed into law this summer.

Like Trump, he has emphasized his background as a businessman. Daines worked for Procter & Gamble and RightNow Technologies in Bozeman before entering politics.

In rare instances, he has pushed back on the Trump administration, such as speaking against recent changes to the U.S Postal Service.

Bullock has tried to separate himself from national politics by focusing on his record as governor. He has highlighted his bipartisan efforts around Medicaid expansion, getting dark money groups to report their spending in Montana and managing the state budget through the coronavirus pandemic.

Bullock has also taken on the Trump administration directly, filing lawsuits over changes to the U.S. Postal Service and the leadership of William Perry Pendley at the Bureau of Land Management.

Trump won Montana by about 20% in 2016, so it makes sense that Daines is aligning himself with the president and that Bullock is trying to focus on local issues, said Robert Saldin, a political science professor at the University of Montana.

However, polls indicate that Trump could have a much smaller margin of victory this year. An Oct. 23 Siena College/New York Times poll showed him leading Biden in Montana by 6%. As a result, Daines needs to secure the votes of as many Trump supporters as possible in a state with a history of ticket-splitting and with an opponent who persuaded voters to cross party lines four years ago, Saldin said.

Like Daines, State Auditor Matt Rosendale, the Republican running for U.S House, has capitalized on Trump’s popularity in Montana.

In 2018, Trump threw his full support behind Rosendale in his unsuccessful run for Senate against Democratic incumbent Sen. Jon Tester.

This year, Rosendale is again aligning himself with the president. He has joined Trump in calling for repealing the Affordable Care Act, protecting the Second Amendment and increasing security at the southern border. He also supports the 2017 Tax Cuts and Jobs Act, a signature Trump policy.

Rosendale is in a close race against Democrat Kathleen Williams, who has pitched herself as an independent committed to improving the health care system, bolstering the economy and protecting public lands, clean water and clean air.

To distance herself from the Democratic Party, she revealed in a campaign ad that she voted for Ronald Reagan, and during a debate with Rosendale, declined to say whether she would vote for Joe Biden. Following the debate, Biden endorsed her.

“You have the Republican candidates attaching themselves to the president and you have Democrats trying to do what they can to push against that,” Saldin said. “… I guess the question is whether they’ll be effective in that.”

In Montana’s gubernatorial race, Republican Rep. Greg Gianforte has vowed “to work with President Trump to put American, and Montana, first,” according to his campaign website.

He’s voted with the president 95% of the time, according to FiveThirtyEight, a website that tracks politicians and elections.

He has connected his experience launching RightNow Technologies to Trump’s business background and has created a business plan for the state — the Montana Comeback Plan — that outlines an agenda that aligns with Trump’s priorities of reducing regulation and not increasing taxes.

Jeremy Johnson, an associate professor of political science at Carroll College, said Gianforte’s emphasis on the Montana Comeback Plan shows he is focused on more than allegiance to Trump.

“The candidates have to walk something of a fine line because the president’s popularity has diminished in recent weeks across the nation,” he said. “…Republican candidates are trying to move beyond just talking about Donald Trump and take on other issues. These are competitive races, so just running a completely pro-Trump campaign is not a way to win.”

Some recent polls show Gianforte has a larger lead in his race against Democratic Lt. Gov. Mike Cooney than the Republican candidates have in the Senate and House contests.

Like other Democratic candidates, Cooney has mostly focused on topics like expanding access to affordable health care, protecting public lands and standing up for workers’ rights. He’s released several policy plans in these areas and often mentions related work he did as a member of the Bullock administration.

“Democrats want to focus more on local issues,” Johnson said. “And this is not new. This predates Trump.”

In other races for statewide office, Republicans have adopted Trump’s strategy of emphasizing their business experience, which their Democratic opponents have painted as a liability.

The Republican state auditor candidate, Troy Downing, has been particularly outspoken about his business credentials.

“President Trump has shown what happens when we elect a business leader to office,” he wrote in a campaign email after speaking at the Pence rally. “Montana needs to follow this example.”

Rep. Shane Morigeau, D-Missoula, has pushed back on Downing’s business background. He has said he is better suited to regulate the insurance and securities industries because he is not part of those industries but, rather, has represented Montanans as a lawyer and state legislator.

Both candidates in the race for secretary of state now work in the government. Sen. Bryce Bennett, D-Missoula, has served as a state lawmaker for a decade and Republican Christi Jacobsen is deputy secretary of state.

Even so, Jacobsen often highlights her experience in the telecom industry, saying it has informed her public sector work. In response, Bennett has said his record in the state Legislature shows he can craft bipartisan solutions to the state’s problems.

David Parker, a political science professor at Montana State University, said the competitiveness could be connected to the decline in Trump’s popularity in the state. Candidates who have allied themselves with the president appear to have less support from independent voters than their Democratic opponents.

“If you see what we saw in 2018, where there was basically a pushback against Republicans overall, and if that’s magnified in 2020 because of the pandemic and the economy, there could be a lot of people just voting straight ticket on those top ballot issues,” he said.

There is little polling on the races for state auditor, secretary of state, attorney general and superintendent of public instruction, but the competitiveness of the headline races could affect their outcomes.

“There are a lot of folks upset, particularly independent voters and Democrats, and even some disgruntled Republicans, and they’re taking it out on the president’s party at the polls, so it could have down-ballot effects,” Parker said.

However, because the four statewide races are more removed from national political issues, Parker said they could also be a place where voters select the Republican candidates.

Voters can drop off their ballots during regular business hours on Monday and from 7 a.m. to 8 p.m. on Tuesday at the following locations.

On Tuesday, there will be additional deposit sites from 7 a.m. to 8 p.m.

Voters who have not yet registered can do so at the Gallatin County Election Office until noon on Monday.