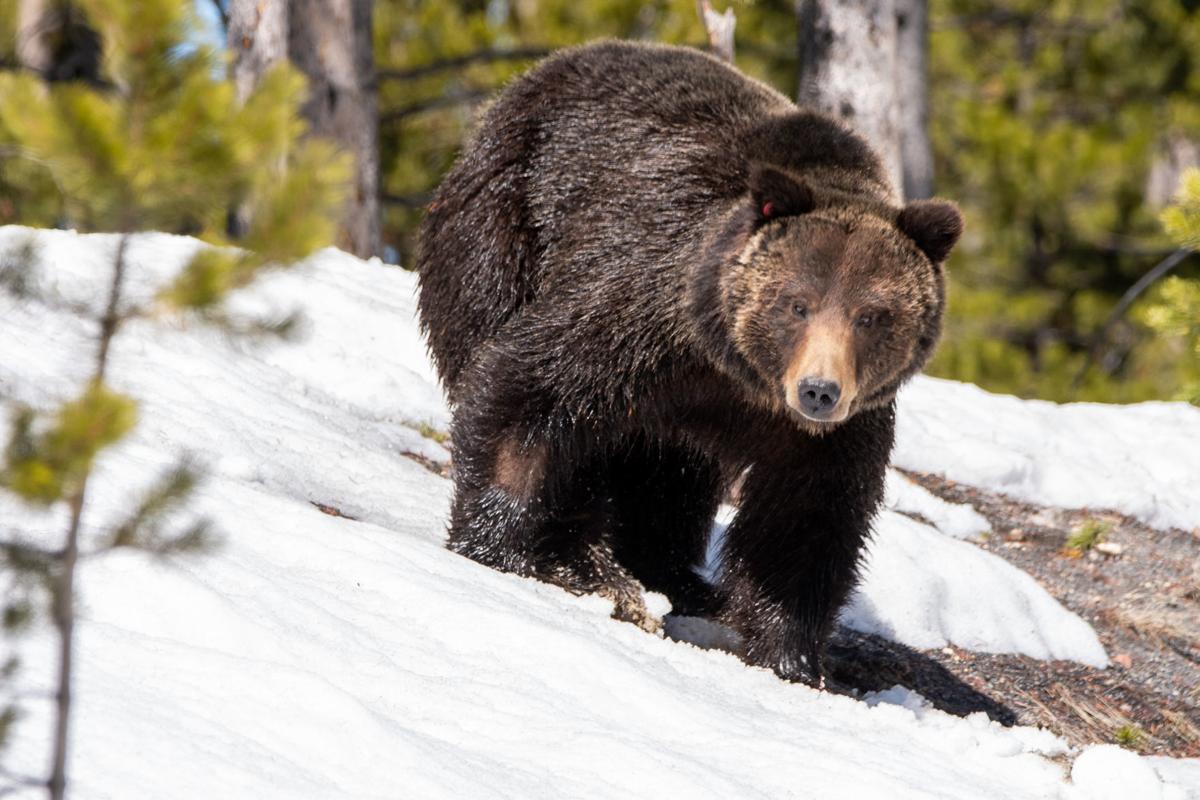 A grizzly bear is shown near Tower Junction in Yellowstone National Park on April 19, 2019. 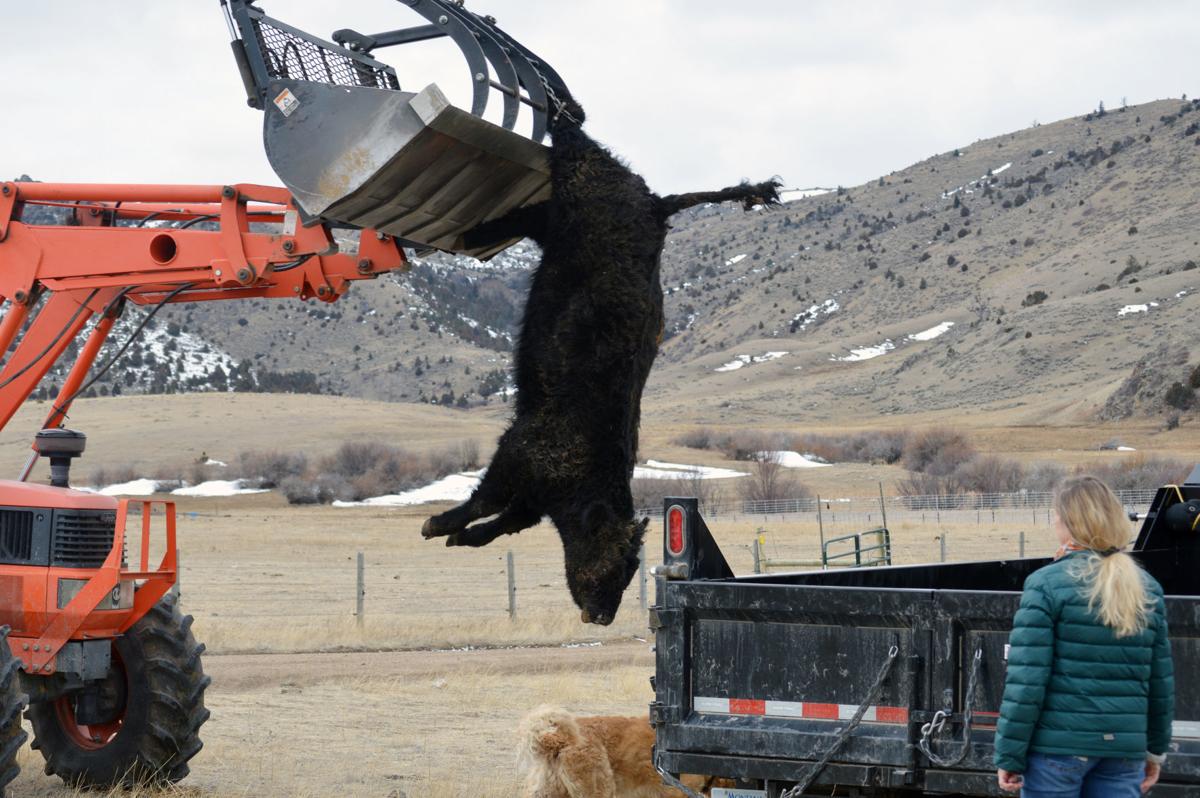 A grizzly bear is shown near Tower Junction in Yellowstone National Park on April 19, 2019.

NORRIS — There’s a large pile of dirt at the far end of a small pasture south of here that’s unremarkable.

Upon closer examination, there’s a bone and maybe a tuft of hair sticking out. But there’s no smell, even on a windy day, that would indicate what’s actually going on beneath the soil.

The site, enclosed by an electric fence, holds roughly 60 decaying carcasses of lost livestock, buried and in the process of being composted.

Linda Owens, project director for Madison Valley Ranchlands Group, established the dead livestock removal and carcass compost program at this site last year. She secured grants to pay for the operation and picks up the animals herself, free of charge. Matt Moen, owner of Bar MZ Ranch, is a partner of the project, allowing the site on his land and has employees contracted to manage it.

The process is pretty simple.

Last Friday, Owens picked up a neighboring cow to add to the site. She pulled into the pasture with a new trailer she purchased with grant money. Billy Flynn with Bar MZ Ranch used a tractor to pull the carcass out of the trailer, and once dumped at the site, he covered it in dirt and hay. Every few months, someone at the ranch turns the soil to aid the composting, but nature does the rest.

Moen said all tags are removed from the livestock before they’re left at the site and that they keep the area clear of anything that’s not biodegradable.

For years, ranchers could count on coyotes and magpies to take care of carcasses with minimal conflict with other animals or humans. But Montana’s grizzly bear populations are expanding, including in the Madison Valley.

That’s a win for conservation groups who advocate for keeping the bears federally protected under the Endangered Species Act, but it’s also put strain on agricultural producers.

The carcasses attract predators when out in the open and can lead to conflicts with wildlife, humans and other animals.

Madison County ranchers claimed the highest number of payouts from the state for livestock killed by predators out of any county in 2019, according to data from the Montana Livestock Loss Board. The board pays market price for livestock killed by grizzly bears, wolves and mountain lions, but only if the kill can be confirmed by the U.S. Department of Agriculture Wildlife Services, meaning that number is only a snapshot of depredation in the state. Madison County ranchers were granted 45 payouts at a total of $57,772.26.

“We can show that we’re being proactive about it. People can’t say we’re doing nothing,” Owens said.

Owens took on the project and partnered with the National Fish and Wildlife Foundation, Vital Ground Foundation, People and Carnivores, the state Livestock Loss Board and the Wildlife Conservation Society to get it off the ground.

Jim Hart, a Madison County commissioner, said people have been wanting to start a carcass removal program in the area for at least eight years, but that it’s hard to find someone to take it on. It requires land, management and most importantly, buy-in from stockgrowers who would use the service.

“People worry about the smell, they worry about diseases leaching into the ground … The people who are very knowledgeable know that’s not an issue,” Hart said.

Hart said people in the Ruby Valley tried to start a similar program in their area in the last year, but weren’t able to get the approval needed from county officials.

Clayton Marlow, a professor of animal and range sciences at Montana State University, offered guidance for the project when needed. He said organizers worked to ensure the composting site was in the right spot and far from any surface water. Beginning this summer, he plans to have students go out to Bar MZ Ranch to conduct research. Marlow said that as long as the soil is continually turned, there should be no problem.

“I tell my students if you can smell it, you’re not composting,” Marlow said.

Blackfoot Challenge, a nonprofit in Ovando, started a carcass removal program in 2003 with just a handful of ranchers participating, according to Seth Wilson, executive director of the organization and chair of the Livestock Loss Board. Today, Wilson said, hundreds of stockgrowers in the area are using the service.

“The big picture for us in the Blackfoot Valley is that the landowners have been willing to work at this for many years,” Wilson said.

Wilson said it was difficult in the beginning to get ranchers to trust the program, that some didn’t want to share their loss numbers with anyone. But those who pick up the livestock are discreet and invested landowners have worked hard to build up the program.

“It is a type of prevention tool that does really help,” Wilson said.

A 2017 case study on Blackfoot Challenge cited data from Montana Fish, Wildlife and Parks that show a 74% reduction in reported conflicts between humans and grizzly bears in the project area from 2003 to 2013 and a downward trend in grizzly bear deaths. The nonprofit’s success is attributed not only to carcass removal but other prevention efforts like installing electric fencing in high-risk calving areas, range riding and analyzing land-use practices.

John Crumley, president of Madison Valley Ranchlands Group, said he toured the Blackfoot Challenge’s carcass removal site and saw that it was effective in taking care of attractants. That, and stories of human-bear conflicts happening in the valley, convinced Crumley that Madison Valley needed a site.

Crumley and Owens were on the founding board of the nonprofit group in 1996, which has a mission to keep ranching a viable way of life in the Madison Valley. Crumley said that when the wolf population began expanding in the Madison Valley and was killing livestock, the group hired range riders to ward off the predators and help protect area herds. He said it was a very effective program for about six years.

But range riding is a different story when more grizzlies are present.

“We don’t know many people who can haze a grizzly bear,” Crumley said.

Owens said she knows of range riders in the Centennial Valley who’ve started checking in with each other every night to confirm they had not been attacked, something they didn’t do when they were hazing wolves.

However, range riders can go where Owen’s trailer and truck can’t — in the mountains on U.S. Forest Service grazing allotments. When a cow is killed in a hard-to-reach place, the carcass removal program isn’t possible.

Owens has some other ideas for how to protect a carcass that can’t be moved. Electric fencing has proven to be effective in deterring grizzlies, and Owens recently bought some kits that are just large enough to surround a carcass. She plans to loan them out for free to ranches, but is still developing the project. She also plans to lend cameras to ranchers so they can get an idea of the types of predators wandering into their herds.

Owens needs a fair amount of grant funding for these prevention efforts, which can sometimes have strict requirements or efficacy measures. Owens said she’s frustrated that grants require she prove the carcass removal program is reducing conflict.

“How do you show conflict reduction when the (bear) population is growing?” Owens said.

Moreover, there are limited funds that a number of groups compete for.

John Steuber, USDA Wildlife Services state director, has been putting on non-lethal depredation prevention workshops for stockgrowers since 2015. He oversees agents who are range riders, put up fladry fences that deter wolves, install electric fences and those who inspect livestock that have been killed.

He said one of the greatest challenges in preventing conflict is finding money to pay for it.

“There seems to be no limit to what we could be doing, but it all takes funding,” Steuber said.

The tide may be turning as officials recognize the strain of expanding grizzly bear populations. Wildlife Services has seen recent injections of federal money from Congress and the U.S. Department of the Interior. Conservation groups like The Natural Resource Defense Council and Defenders of Wildlife lobbied hard for Congress and the president to approve an appropriation of $1.38 million for Wildlife Services in 12 states, which was passed in December.

Steuber said a portion of this money will be used in Montana to hire two range riders (one for the Gravelly Range), an electric fence technician and a conflict specialist on the Blackfeet Reservation.

The Department of Interior announced earlier this month that it would give Wildlife Services $250,000 to hire two bear management specialists. Steuber said those specialists will work in Madison County and on the Blackfeet Reservation. Part of their job will be to remove problem bears while also doing some investigative work into livestock losses.

Some prevention efforts are paid for through cost-sharing projects with the NRDC and Defenders of Wildlife, like a program that reimburses landowners 50% of the cost of an electric fence up to $500. Russ Talmo with Defenders of Wildlife runs the program and works with a Wildlife Services agent who also installs fences. He said the program averages 40-60 projects per year and that the number of inquires continues to grow.

Talmo said that 112 landowners who participated were surveyed a year after installing an electric fence and 98% of them reported the fence was effective in keeping predators out.

The electric fence program aims not only to protect livestock or products, but also to protect wildlife. Talmo said Defenders of Wildlife invests in these projects in part because human-bear conflict is a leading cause of bear mortality, and the organization wants to change that. Further, the group wants to make the expanding bear population more palatable.

“By reducing these conflicts, you’re increasing acceptance of bears on these landscapes,” Talmo said.

While some programs require a landowner to spend their own money, Owens is adamant the prevention tools Madison Valley Ranchlands Group offers are cost-free. She said ranchers are already paying though lost livestock.

“We’re already paying the bear tax. I don’t think the ranchers should be responsible for prevention costs, too,” Owens said.