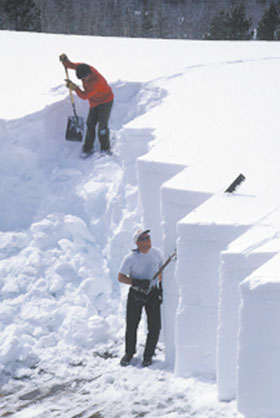 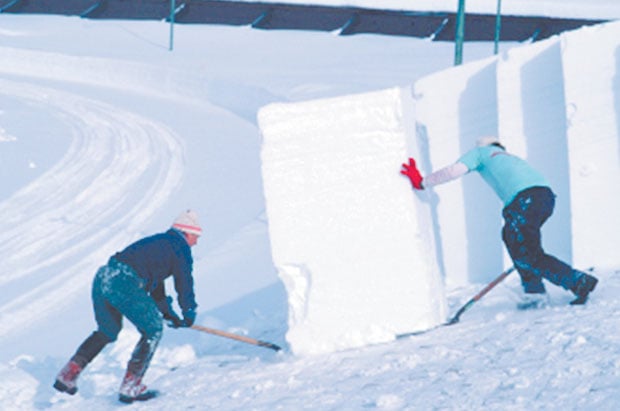 The winterkeepers in Yellowstone National Park are among the last bearers of their tradition, men who live in isolated cabins surrounded by an open and frozen landscape, working to keep the park's buildings from collapsing under the stress of heavy snow.

In many ways, they are anachronisms, preserved along with the pristine landscape they call home.

Some know them as hermits, recluses or lone wolves. But in the solitude, quiet, and daily beauty of the park, Dale Fowler says it's just a different way to get by. He's been winterkeeping since the 1980s.

"It's not a real complex thing," he said. "You live out here by yourself and you move snow."

Winterkeepers have been in the park since the late 1800s, but today only a few maintain the trade. Over the decades, the task of roof shoveling has become an art.

The necessary tools are few: a shovel, a crosscut saw, a good pair of boots, maybe with spikes on the bottom.

The rules are simple: Falling off roofs is not allowed. And if someone does fall off a roof, they can't get injured.

"None of us has ever had so much as a hangnail," the winterkeepers often say, delivering the line with pride.

Jeff Henry has spent 32 winters shoveling. In the deep drifts of snow, he's learned to make his craft exact. When he walks up a roof, he makes horizontal cuts into the snow with his saw. When he walks down, he makes vertical cuts. There is no wasted motion and no unneeded rearranging of the saw.

Eventually, dozens of upright blocks sit atop the roof like tall refrigerators. Then, Henry slides the blade of his shovel beneath them and sends them off the roof in a cascade of broken white.

One of the largest roofs Henry has maintained is in Canyon Village and holds about 3,000 to 3,500 of the blocks. It takes him more than 70 days to clear.

But as practiced as he is at shoveling roofs, Henry admits he's often fallen off roofs that are up to 25 feet above the ground. He mentions it with a shrug.

"It's just a non-issue," he said. "It's like spilling coffee on your kitchen table in the morning. It's not worth talking about."

That's because he lands in powdery snow that he said is so soft you could drop a wine glass from a roof and it wouldn't break. In fact, he said he gets off roofs at the end of the day by jumping into the snow. He calls it "a grand sport."

Some don't understand how he can spend hours laboring in the cold winter days, secluded from so many others. When they hear about Henry's job, they respond with quips like, "Better you than me," or "You're a sick man."

To Henry, though, the work can be Zen-like.

"There's no phone ringing, no Blackberry doing whatever Blackberries do," he said. "There are a few kindred spirits out there who understand."

Steve Fuller is one of them.

He spends his winters in the park and summers in Africa, the two halves of his life spent in wild, beautiful places. Fuller learned to appreciate the country after living in the dead center of large European cities.

He cites the quote: People are at their best when far and few between.

"City people pretend not to see each other," he said, remembering feeling lost in a crowd of millions.

Now, the Lower Falls of the park's Grand Canyon is his front yard. His home sits in a major corridor for grizzlies, bison and other wildlife. It's a lifestyle that he said is "very good for you if it doesn't kill you."

He says many people are fascinated by the romance of it all, but he's not sure winterkeeping would suit many people. The simple chore of taking the garbage out can lead to a survival situation, and a blizzard can mean working for 10 straight days. But Fuller likes that.

"I'm not bound to the clock, but rather to the mission and the job," he said.

In Fuller's mind, a winterkeeper is a certain type of person — someone who requires empty space and solitude, someone with a commitment to place.

"Lots of guys shovel snow, but they're not winterkeepers," he said, referring to workers who don't live in the park. "I take some pride in being a winterkeeper and I'm somewhat protective of what I conceive of it to be."

Fuller and Fowler are the only ones left who still live in the park full time during the winter, and when they retire, Fuller thinks that'll be the last of the winterkeepers.

He says that's partly because contracting out to workers who don't live in the park would be less expensive. But that change would mean a loss of a great tradition in Fuller's eyes.