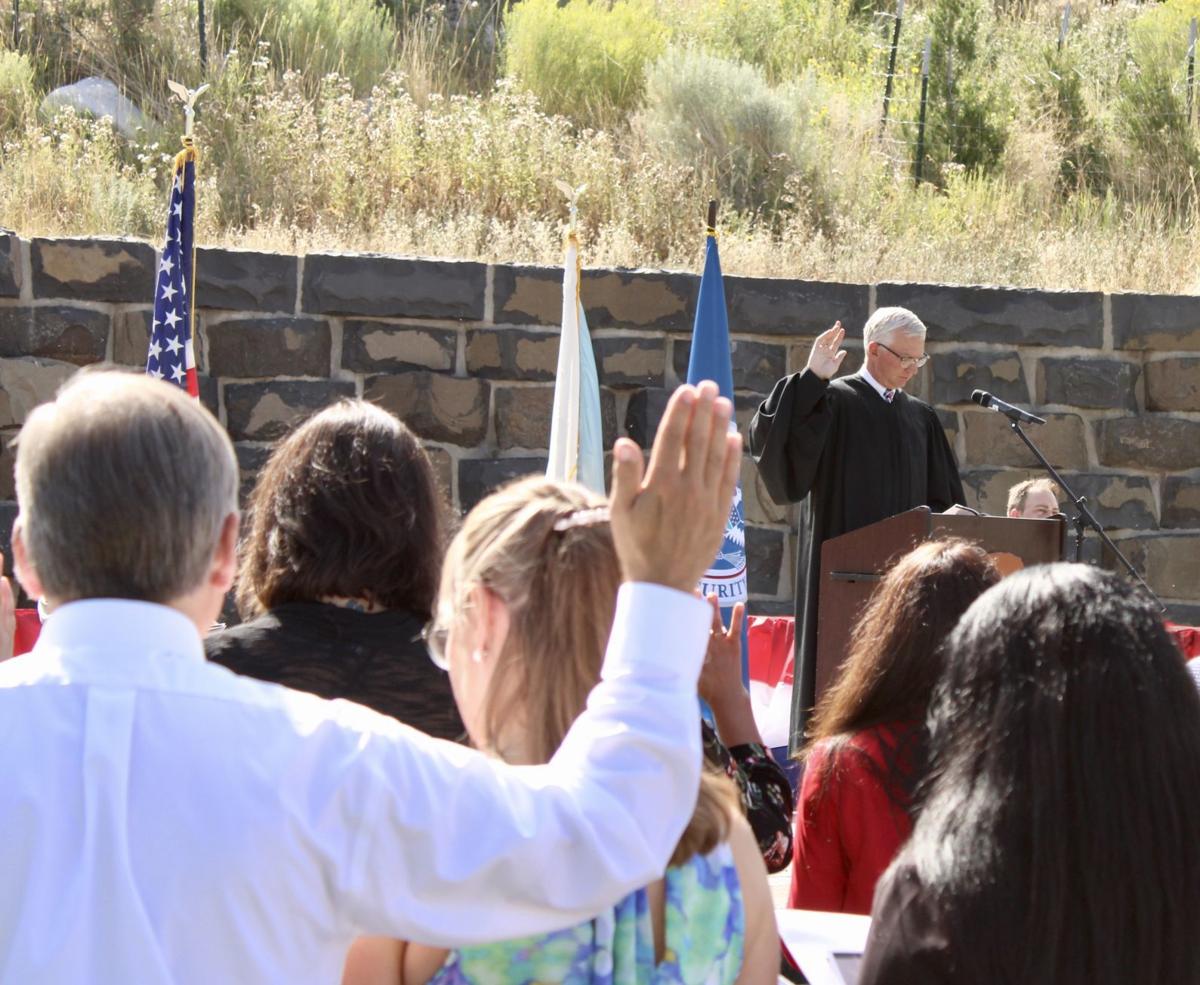 U.S. Magistrate Judge Mark Carman leads the Oath of Allegiance at a naturalization ceremony at the entrance of Yellowstone National Park. 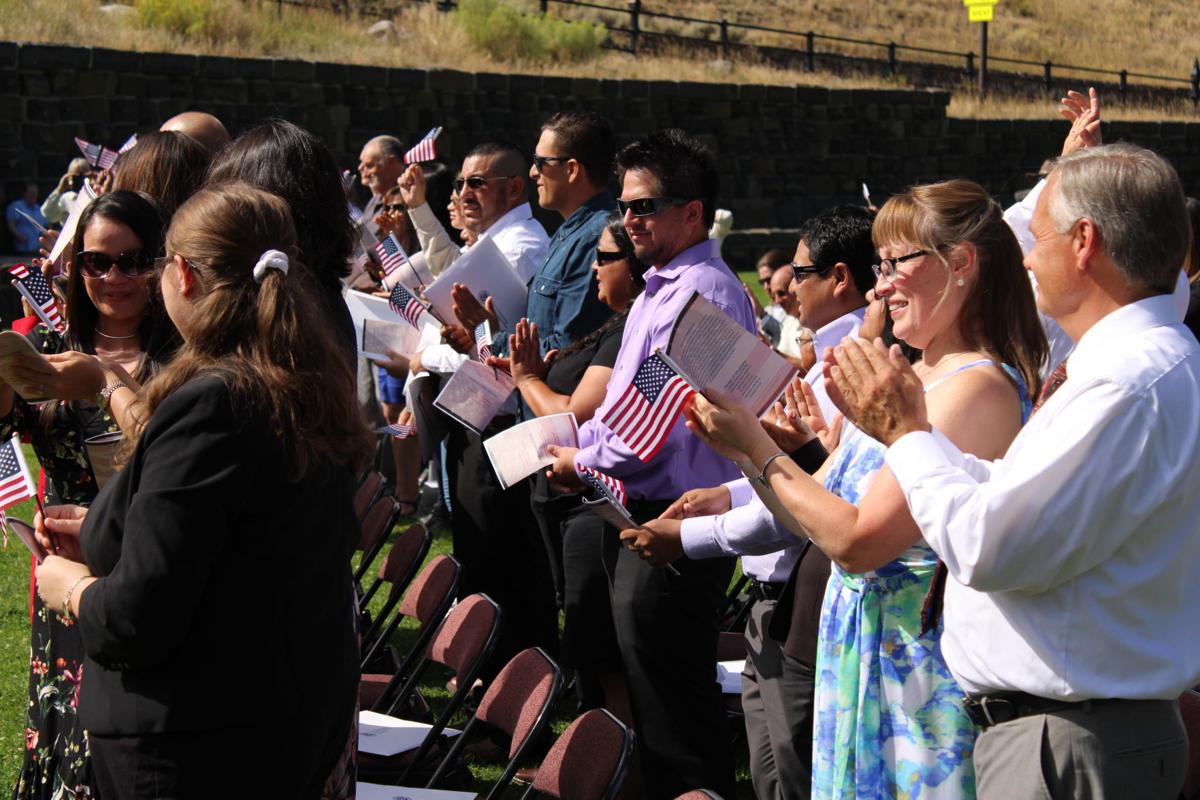 New U.S. citizens clap and cheer as they’re officially sworn in at a naturalization ceremony at the entrance of Yellowstone National Park.

U.S. Magistrate Judge Mark Carman leads the Oath of Allegiance at a naturalization ceremony at the entrance of Yellowstone National Park.

New U.S. citizens clap and cheer as they’re officially sworn in at a naturalization ceremony at the entrance of Yellowstone National Park.

Surrounded by her three daughters and 11 grandchildren, the 70-year-old beamed.

“I’m so happy. This is my special, special day,” Ramirez said.

Ramirez, originally from Mexico, and her family drove 10 hours to participate in a naturalization ceremony that took place in Arch Park near the entrance to Yellowstone National Park. Ramirez was one of 42 people from 23 different countries participating in the ceremony.

Kristi Goldinger, district director for the United States Citizenship and Immigration Service, said organizers want to make the ceremony as special as possible.

“Any opportunity to give our new citizens an enriching experience, we’re up for it,” Goldinger said.

The federal agency partners with the National Park Service to host these ceremonies in parks all over the country. Thursday was Yellowstone’s fifth time hosting.

The ceremony was an official court proceeding led by Magistrate Judge Mark Carman of the District of Wyoming. It included a presentation of colors by the Yellowstone National Park Mounted Color Guard, a recorded welcome message from President Donald Trump, and speeches by Assistant U.S. Attorney Francis Leland Pico, Goldinger, and Yellowstone Deputy Superintendent Pat Kenney.

Carman told the small crowd of new citizens and family members that the naturalization ceremony was his favorite day of the year. He quoted Winston Churchill and John F. Kennedy, and talked about the hardships of immigration. He told the audience that it’s no easy feat to leave one’s country behind and complete the lengthy process to become a citizen.

The process of naturalization can take a decade to complete. The most common path requires a person to hold a permanent residence card, or Green Card, for five years before applying, and for an additional five years after initial application. An applicant must be able to read, write and speak English, be a person of “good moral character,” and pass the naturalization test to become a citizen.

The test includes questions about the U.S. Constitution, history and government, and applicants receive a score based on right answers and English ability.

Ramirez’s daughter, Maria Escalante, 40, said her mom studied nearly every day for two years to prepare for the test. She said the family is excited to celebrate.

“We saw the struggles. It was her dream, and we’re so proud of her,” Escalante said.

Escalante was only 10 years old when she came with her mom and two sisters to the U.S. They’ve lived in Evanston ever since.

Escalante said her dad was first to arrive in the U.S. and later brought the family over. Ramirez worked as a cook at the local hospital and her husband worked in construction. He died 12 years ago and was buried in Jalisco, Mexico, where the family is originally from.

Now that Ramirez is a naturalized citizen, she can travel more freely. She plans to head to Jalisco soon with her grandchildren, and visit her husband’s grave.

New citizens no longer have to carry Green Cards and can apply for U.S. passports. If an applicant has a child under the age of 18, that child becomes naturalized through the citizenship process as well. Citizens are also able to petition to bring family members into the U.S. as permanent residents.

When Kenney spoke during the ceremony, he encouraged the group to enjoy their new status at a national park. The parks are theirs now, he said.

“You may have traveled to Yellowstone as a visitor, but you’re leaving as a citizen,” Kenney said.