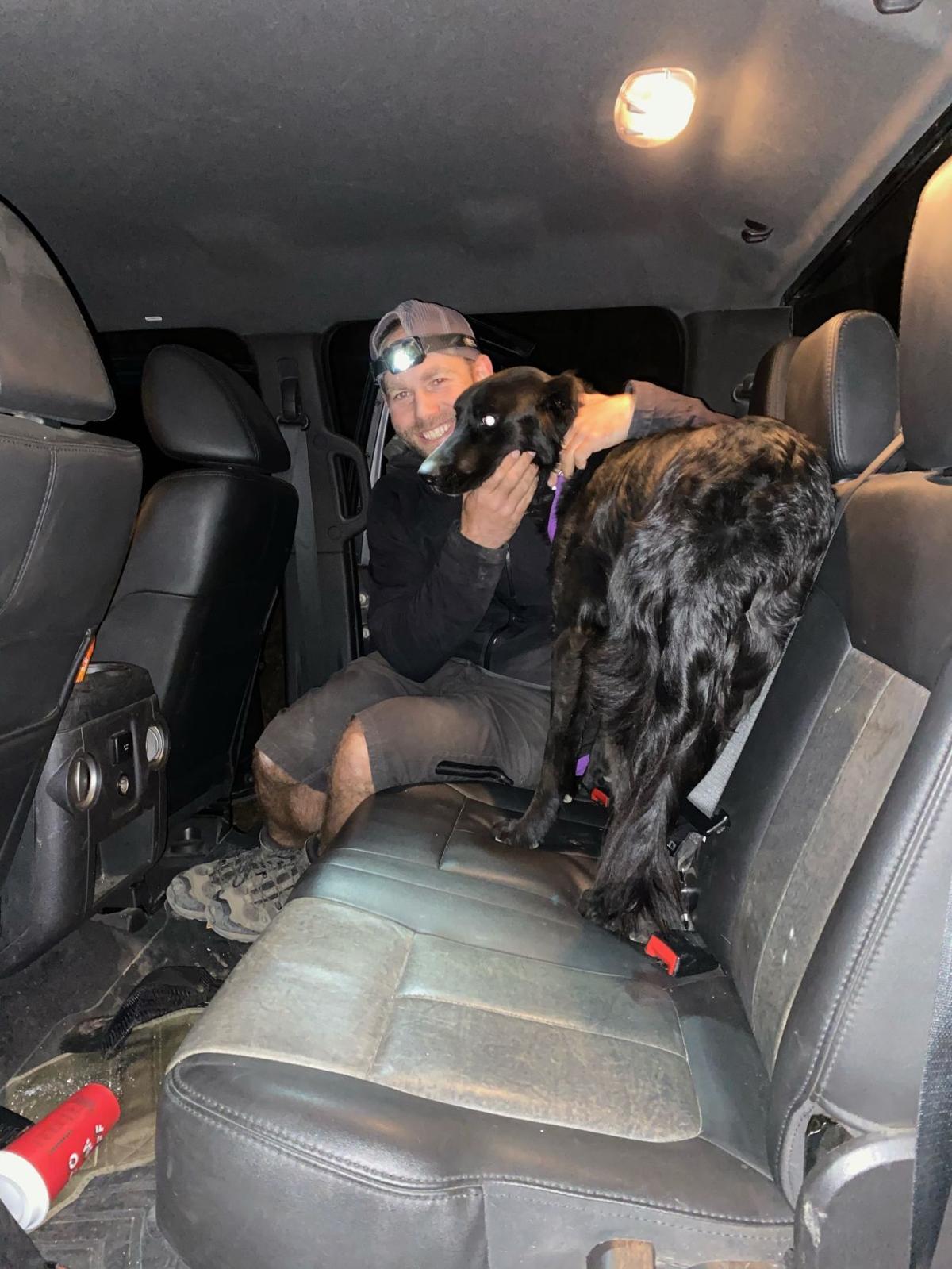 Dan Gabel hugs his dog McLovin after he was saved in the Bridger Mountains. 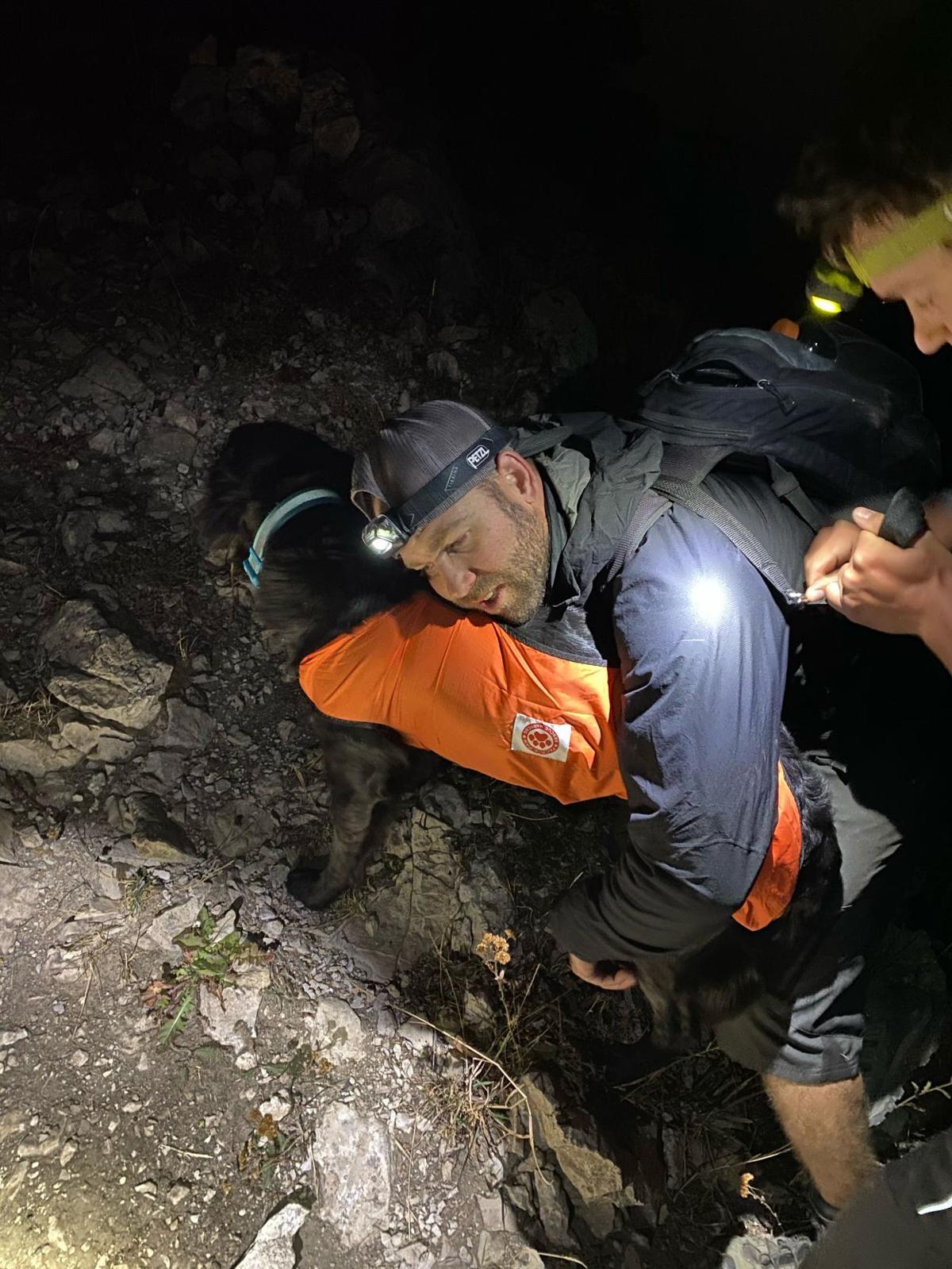 Dan Gabel hugs his dog McLovin after searching for him for five days. 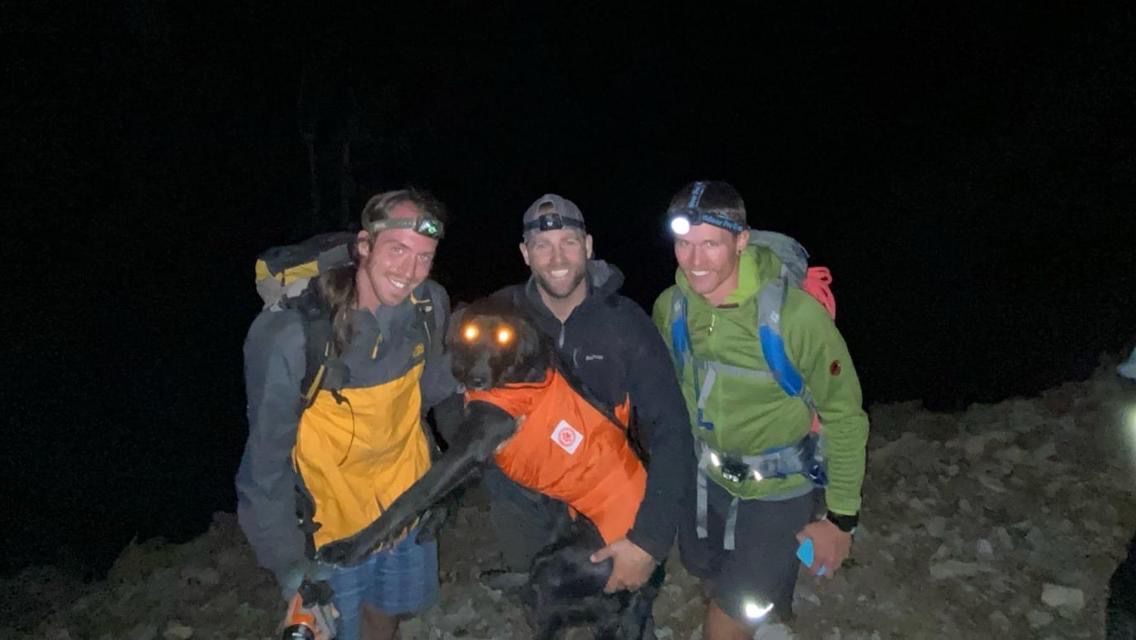 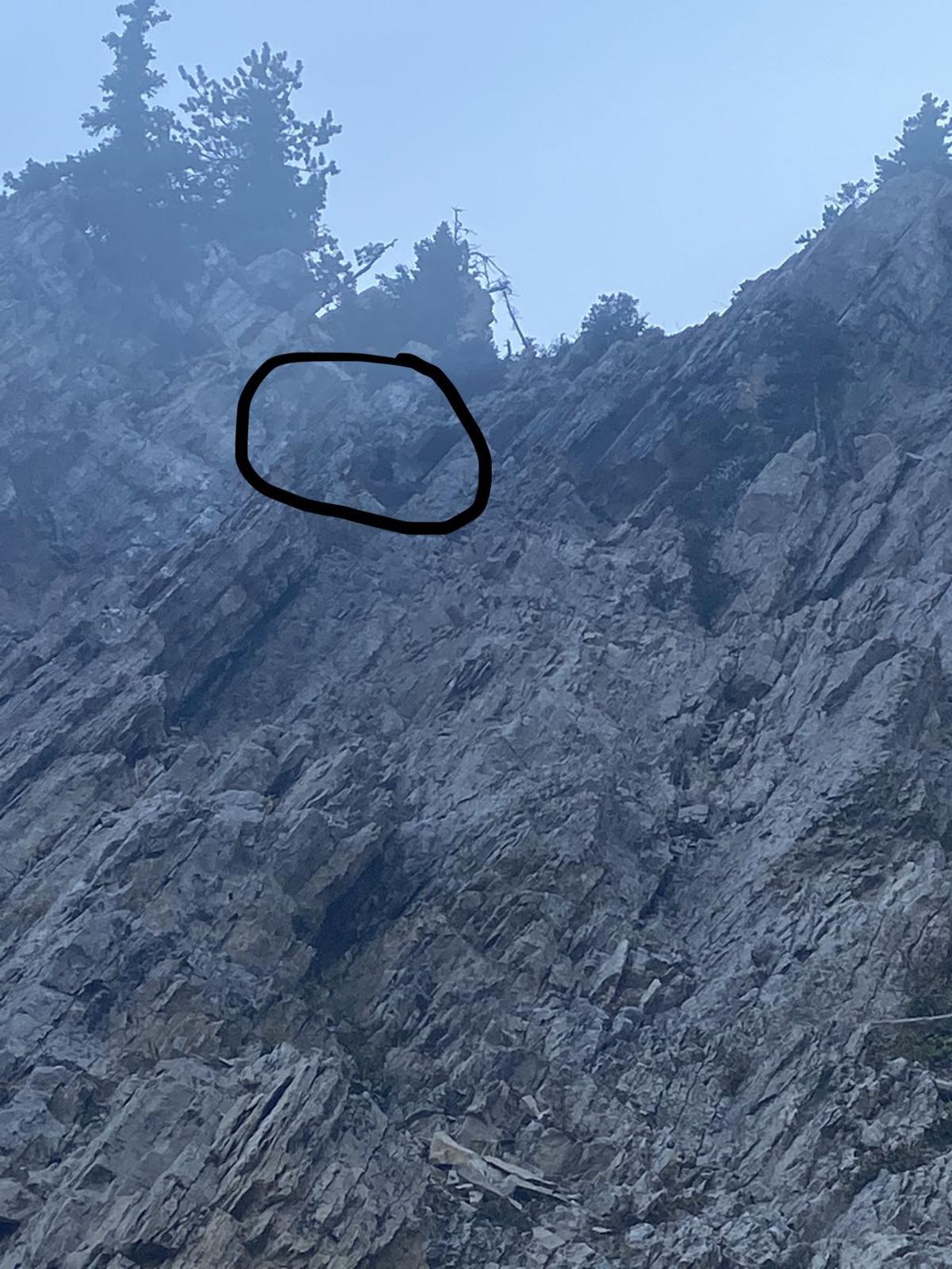 McLovin the dog waits on a cliff in Mundys Bowl in the Bridger Mountains. 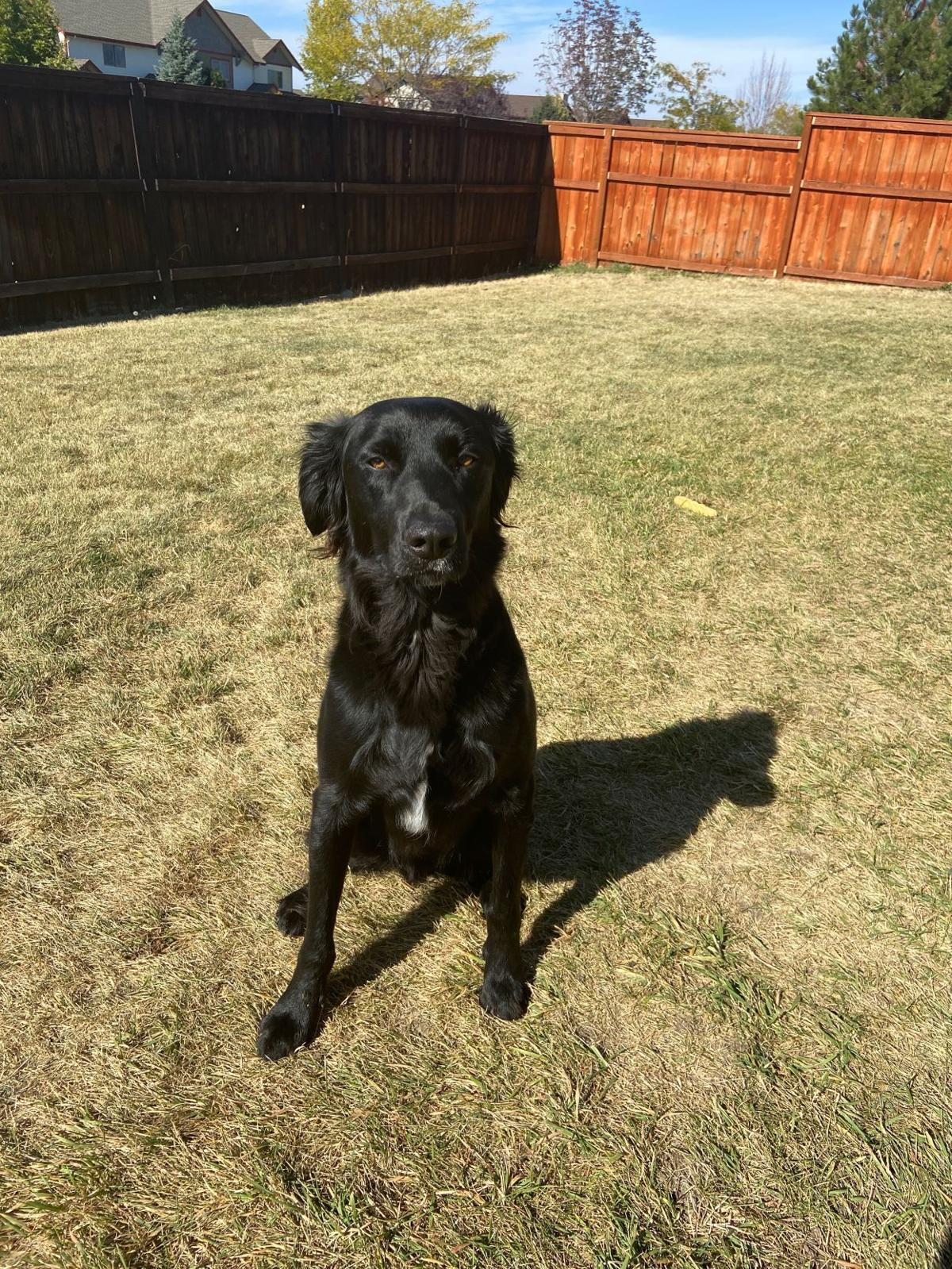 McLovin the dog looks at the camera.

Dan Gabel hugs his dog McLovin after he was saved in the Bridger Mountains.

Dan Gabel hugs his dog McLovin after searching for him for five days.

McLovin the dog waits on a cliff in Mundys Bowl in the Bridger Mountains.

McLovin the dog looks at the camera.

After five days of searching, Dan Gabel finally spotted something along the cliffs in the Bridger Mountain Range.

Gabel had been searching for his dog since Tuesday of last week. As soon as he had time outside of work, he went to the mountains to look for him.

As he peered through his binoculars Sunday, Gabel spotted him at last.

McLovin, or Mick for short, was trapped along a rocky cliff in Mundy’s Bowl. Once he was found, the rescue effort needed to begin.

Word circulated through Facebook groups. Climbers volunteered to help with the rescue. By 12:30 a.m. Monday, Mick ran into the Gabels’ home, wagged his tail and acted like he just returned from a normal hike.

“I don’t even know how to say it,” said Dani Gabel, Mick’s other owner and Dan’s wife. “There was no way we could have found him without all of Bozeman watching out for him.”

Dan and Mick typically go hiking together on Tuesdays, when Dan is off from work. Dan planned to hike from the M Trail to Bridger Bowl last week. Around 4 p.m. Tuesday, Dan stopped at Saddle Peak to have a snack and Mick was lying down next to him. Shortly after, though, Dan looked up and didn’t know where Mick was. He disappeared.

Whenever this happened in the past, Mick usually returned within a minute. But this time, Dan couldn’t find him. He spent much of the next few days looking, whenever he had free time. Dani posted on a bunch of Facebook groups asking for help.

Some people offered to help look for Mick while others offered trail cameras and to post signs around town. Other dog owners posted success stories of when they found their missing dogs to help the Gabels keep their hope.

“The scenario that he might have gotten eaten or injured and not able to move definitely crossed our minds,” Dani said.

Mick will turn 2 years old in November. The Gabels adopted him from Heart of the Valley Animal Shelter on St. Patrick’s Day in 2019. He was there because he was found in an abandoned horse trailer in Miles City.

That’s “the thing that makes the story so awesome,” Dani said.

On Saturday, the Gabels coordinated where to have people look to try and cover as much ground as possible at once. Still, nothing.

Once Dan caught a glimpse of Mick, he called out his name. Dan saw his ears perk up and some movement. So he knew Mick was still alive. He and Dani then tried getting in touch with nearby climbers who could help out. Mick was stuck on a ledge with rocks all around him.

Max Cohen, who has been climbing for 15 years, saw a post in a climbers’ Facebook group. He had heard about efforts to search for Mick all week. Twenty minutes after he learned of the need for climbers, he threw his gear into his car and headed to Bridger Bowl.

“If nothing else I’d get to do a nice sunset hike up at Bridger,” Cohen said.

He hiked between 2.5 and 3 miles. He found Dan by looking for the flashing headlamp he was wearing. Then they came up with the best way to save Mick. Cohen called it “a pretty easy climb” to free solo up about 60 feet to Mick. Knowing Mick had some anxiety issues, Cohen hoped he wouldn’t jump off the ledge.

“It was really relieving to see Mick was willing to let me help him,” Cohen said.

Other climbers were nearby to help, too. It wasn’t until around 11 p.m. Sunday that Mick, Dan, Cohen and others returned to the bottom of the mountain.

In the end, Mick was safe.

“Seeing him go into his father’s arms was a heartwarming moment,” Cohen said.