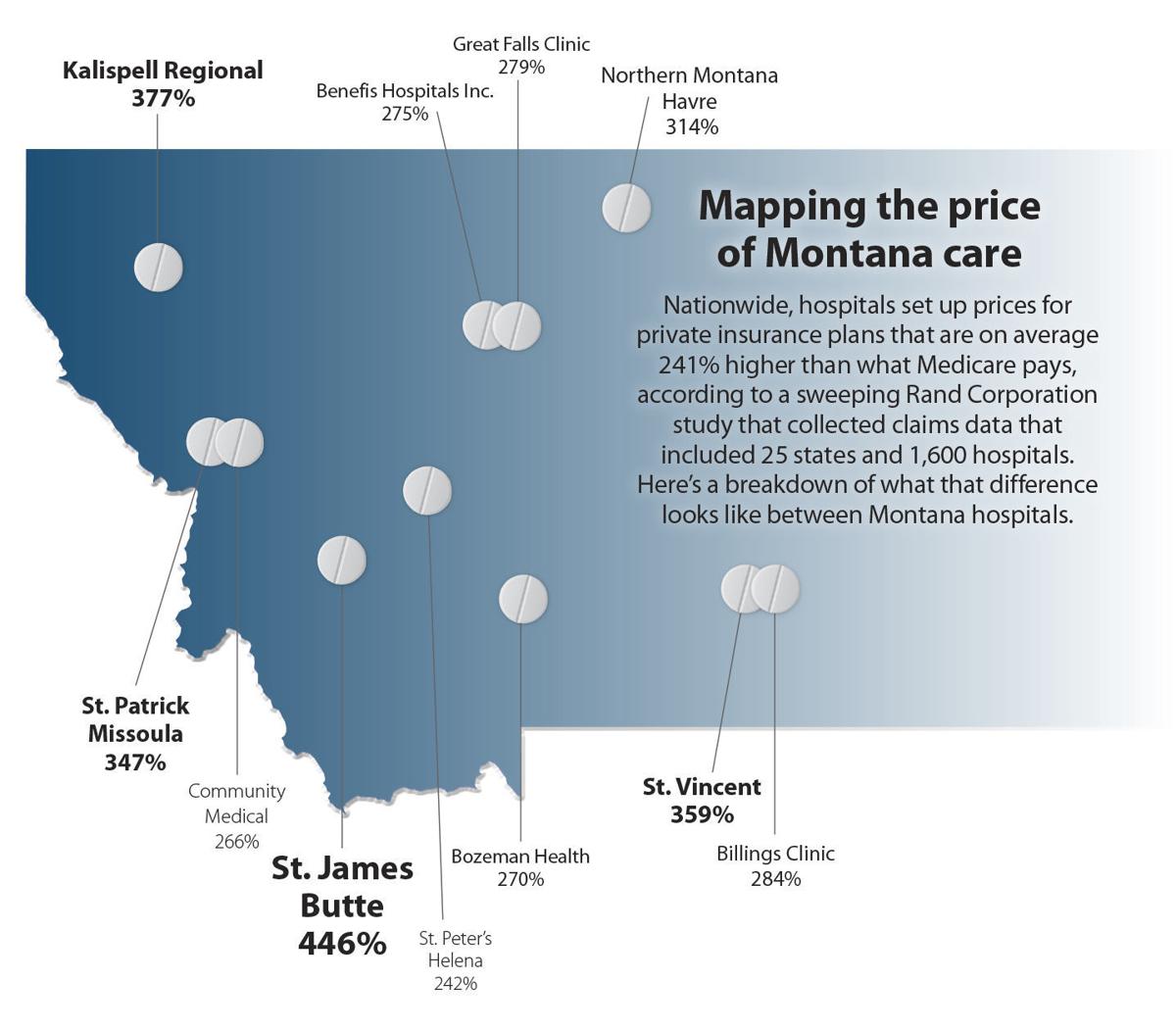 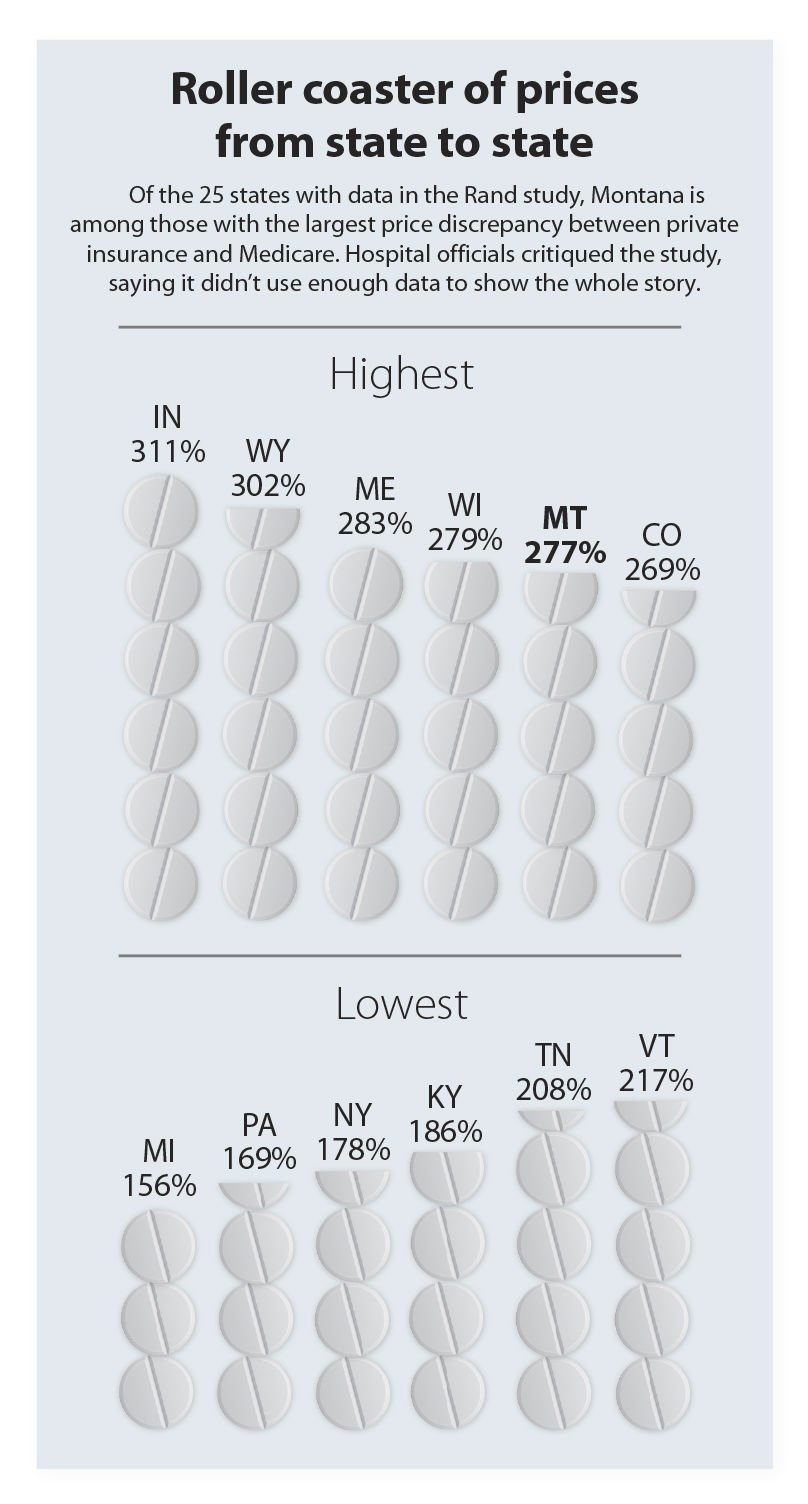 When someone in Montana enters a hospital with private insurance, the price for care can be two-to-four times beyond what the federal government sets as fair.

Rand Corporation, a global think tank, released a study earlier this summer that showed private insurance companies paid twice what Medicare paid for the same services nationwide from 2015 through 2017.

Put another way, if private insurance paid the same amount as the national program, it would have reduced health spending by $7.7 billion.

There were 25 states and 1,600 hospitals included in the study. Montana prices had the fifth highest imbalance between private insurance and Medicare.

On average, Montana hospitals set prices for private insurers 277% beyond Medicare. That’s $27 million more than what the government paid.

“We always assumed we pay a little bit more in rural Montana. This is the first study that quantified that and showed yes we are,” said Don Creveling, the executive director of Montana Association of Health Care Purchasers, a coalition that tries to improve health care and pricing.

The study looked at employer-sponsored insurance plans that are the result of negotiations between insurance companies and health care providers. People paying for those plans typically aren't part of the conversation.

“It’s becoming increasingly clear this system is not working,” said Chapin White, one of the two authors of the report. “It’s leading to premiums and cost sharing that are just unaffordable for normal working folks.”

Hospitals charging private insurance more isn't surprising. How much the prices vary between states — and even between hospitals a few miles apart — is.

In Missoula, for example, St. Patrick Hospital charged private plans 347% more than Medicare. On the other side of town, Community Medical Center had prices set 266% higher.

Statewide, the study showed St. James Healthcare in Butte charged private plans the most in 2017, 446% more than what Medicare covers. The lowest price came from St. Peter’s Hospital in Helena, which charged private insurance 242% more than Medicare.

Ge Bai, a hospital price expert with Johns Hopkins University Carey Business School, said it’s the first study to name and compare hospitals based on what they charge, throwing light into a dark corner in the health industry.

“It shows hospitals are charging what they want,” Bai said. “The more powerful the hospital, the higher the price.”

There are roughly 156 million Americans with job-based health plans. As prices rise, half of the families on those plans say they ration trips to the doctor and leave prescriptions unfilled, according to a recent survey by the Kaiser Family Foundation and The Los Angeles Times.

People on all sides say something needs to change. But they haven’t agreed on what.

White said Medicare was the starting point for comparison because it’s the largest purchaser of care in the country with decades of data and research. He said its payment factors in things like intensity of treatment and an area’s cost of living.

States with the largest price jumps between Medicare and private insurance that surpassed Montana were Wisconsin, Maine, Wyoming and, at the top, Indiana. Michigan had the smallest differences between the two coverages.

Bai, who wasn’t part of the study, said hospitals charging higher prices likely have the upper hand in negotiating contracts with insurers. The behind-the-scenes agreements — and prices — change from insurer to insurer and business to business.

“The employer, they need to take this very seriously,” Bai said. “Every dollar they overpay is hurting their bottom line and is also hurting the wage increase of their employees.”

She said hospital power comes from a few places. If a hospital is the only provider in town, insurers have less leverage to negotiate lower costs. If there are several hospitals in town but each has unique specialities, that also drives up the value.

Bozeman Health and Billings Clinic are close to the state’s average.

Bozeman Health worked out contracts with private insurers that came in 270% higher than Medicare reimbursements, according to the study. Billings Clinic charged 284% more than what Medicare pays.

Bozeman Health estimated its prices are just over 200% of what Medicare pays. Billings Clinic officials said its gap shouldn’t go beyond 240% of Medicare based on their set prices before insurers start negotiating down.

The officials said the difference may be because the study’s data is limited.

The Montana Association of Health Care Purchasers provided the state’s claims data for the study. The numbers are only a percentage of private insurance plans in the state and don’t include the names of employers or insurance companies involved — each operating off different contracts.

White agreed the missing data is a weakness.

“Employers have largely been kept in the dark on the health plans insurers are negotiating on their behalf,” White said. “It’s better to have some glimmers of information and the beginning of some insights.”

He said the authors are already working on a second round of the study, this time with more data.

Creveling with the association said the first study, though incomplete, shows enough to see a trend. Though he warned there’s not a simple bad guy in the story of health care prices.

It’s typically the human resource department in a large company that settles on plans they don’t have the expertise to dissect. Insurers building those plans are trying to make sure customers are covered close to home. There are other factors like the companies that create — and set prices for — life-saving drugs.

Creveling said the problem is, health care is a business. And it’s one people often can’t predict the price of or turn down.

“Every one of these cases we’re talking about in statistical terms is somebody receiving care for a problem. When it’s your child, you’re not shopping for the least costly care. You want the best care,” he said.

Bozeman Health President and CEO John Hill said the hospital applauds any effort to bring prices within view of patients.

The most common critique of the study is its measuring stick: Medicare.

He said Medicare stops at about 80% of the hospital’s costs to treat people. There are other government-funded programs like Medicaid, which providers say also fall short. There are always patients who can't pay bills.

Ludford said hospitals historically looked toward private insurers to make up the difference. He said how much providers lean on private insurance can change from hospital to hospital based on their mix of patients.

Montana sits at the lowest federal reimbursement rates in the nation per person on Medicare. Hospital officials said the state may be an outlier for its high costs because it has more ground to make up.

White, author of the study, said that’s the “old cost-shifting story” hospitals gravitate toward. He argued hospitals have enough control to adjust their costs.

In the 1960s, the cost of care was out of reach for many. Since physicians set prices, the health system was unrestrained. Then in 1965 Congress created the Medicare and Medicaid programs to provide health care coverage to the elderly and poor. Overnight, the government became the nation's largest purchaser of health services.

White said the government eventually shifted from paying whatever costs hospitals outlined, to “here’s a fair amount to pay you and you have to live within your means.”

But hospitals continued to increase their prices for private insurers. White said along the way, hospitals bloated their cost structures, continued expanding in size and services and made Medicare look stingy.

“Hospitals naturally want more revenue and could do good things with that, but Medicare and Medicaid are acting like buyers on a budget,” he said. “Even if everybody's trying to do the right thing, we just set up a system where health plans can’t stand up to these must-have hospitals. The result is a health care system and health insurance premiums that are just unaffordable to society. So we need to change the system.”

The idea behind the Rand study is that employers can use the findings to pressure insurers to cut better deals or cut ties with hospitals charging the most. But in states where many towns or counties have one provider, people paying into plans lose power in that tug-of-war.

The study's authors also wrote that simply putting the numbers out there could make a difference. They think price transparency can help people consider policies that empower patients.

During the 2019 Montana Legislature, lawmakers tried to deal with the cost of health care through a series of bills.

In that wave, Rep. Tom Woods, D-Bozeman, proposed setting a range for what hospitals can charge for a service based on a rate of Medicare. It’s the same route the state used to save millions on its own employee health plans.

Hospitals called the bill government overreach. Some health experts have said a broad resetting of the private market could have unintended consequences, like sending providers out of the state.

Woods’ idea made it out of committee but died later in the session.

Jeremy Johnson, a political scientist at Carroll College, said he doesn’t think that means the conversation will end.

“Hospital charges are all over the place, and it’s not always consistent with quality. This issue is going to get bigger and bigger,” Johnson said. “I believe that a version of his bill will likely come back. It may become an issue that Montana candidates have to talk about.”

Hospitals say predictable prices will take cooperation between providers and insurers. Providers have to offer good cost estimates; insurers have to better explain their coverage. And they say they are trying.

Ludford, of Bozeman Health, said the system has increased its patient financial counseling to find people who qualify for assistance. It also plans to roll out a patient estimator tool next month, though as always the cost won’t be final until a patient’s treatment is done.

As for the price of health care, Olsen with the hospital association said providers throughout the state are trying to make sure doctors coordinate care to save patients money. They’ve also said reimbursements centered on valuable care instead of how many times a patient walks in the door would cut costs in the long run.

In the meantime, some Bozeman residents have cheered news that a competitor is widening its reach in the one-hospital town.

Billings Clinic announced plans last year to build a 97,000-square-foot clinic and surgery center in west Bozeman. The clinic plans to open the center in 2021. With 54 acres in town, clinic officials have said there's space to build more in the future.

Some think competition will lead to lower prices. White said it’s not that simple.

“It could very well be that prices may not change or they could go up if both hospitals feel like they need to compete with each other and offer more services that are expensive,” White said. “The general rule is health care markets don’t work like markets. They don’t do what is expected.”

Whether or not a fix comes, people are still going to get sick.