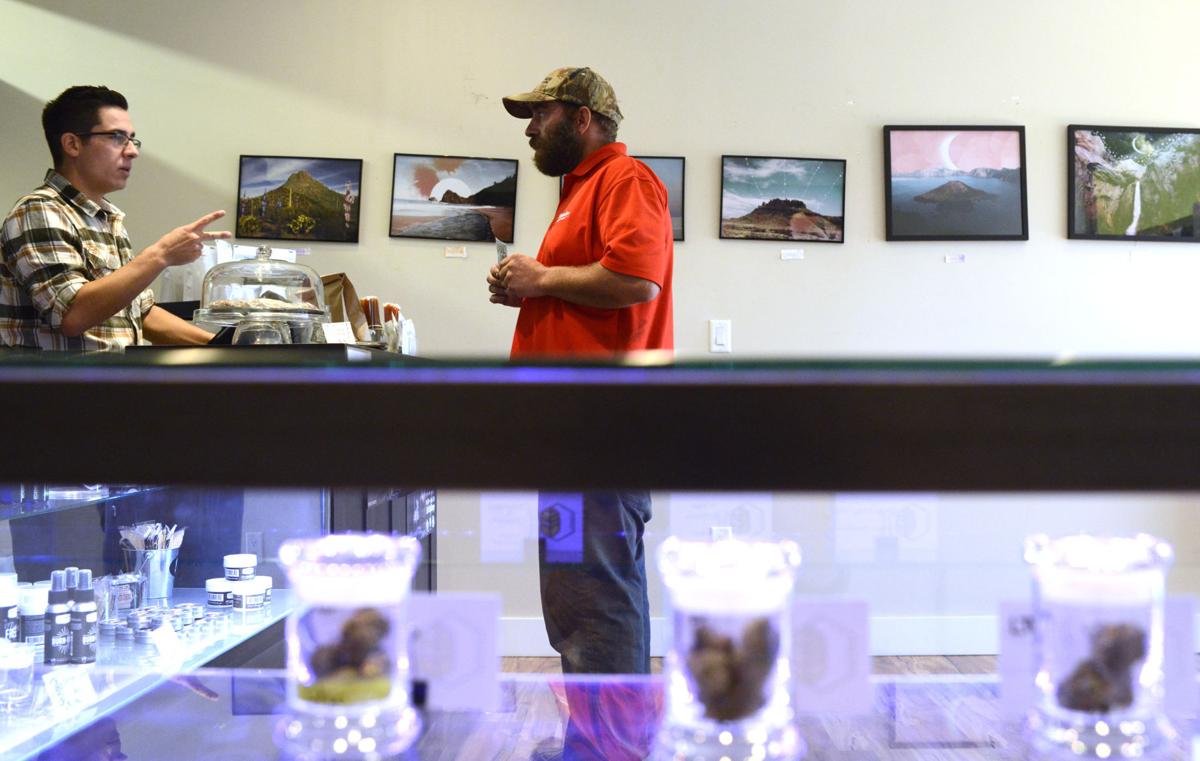 John Salazar fills an order for a patient at Spark1, a local medical marijuana provider, on Friday. 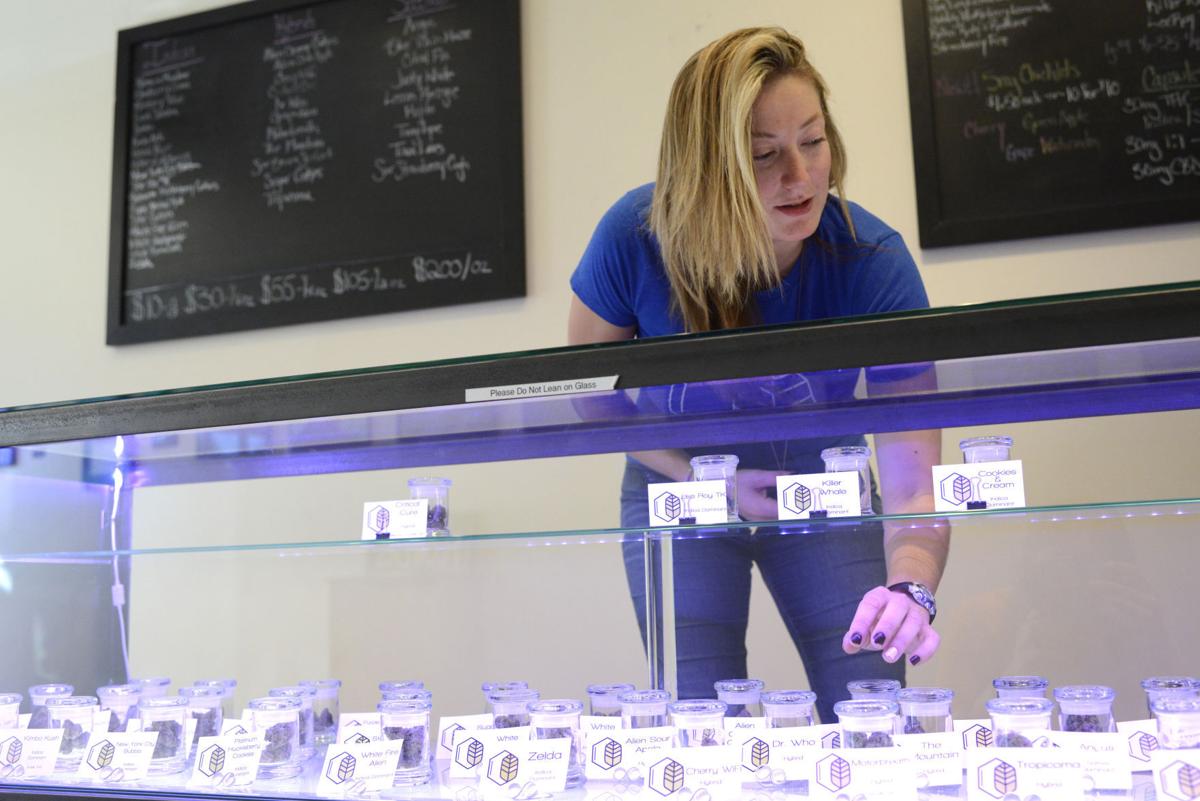 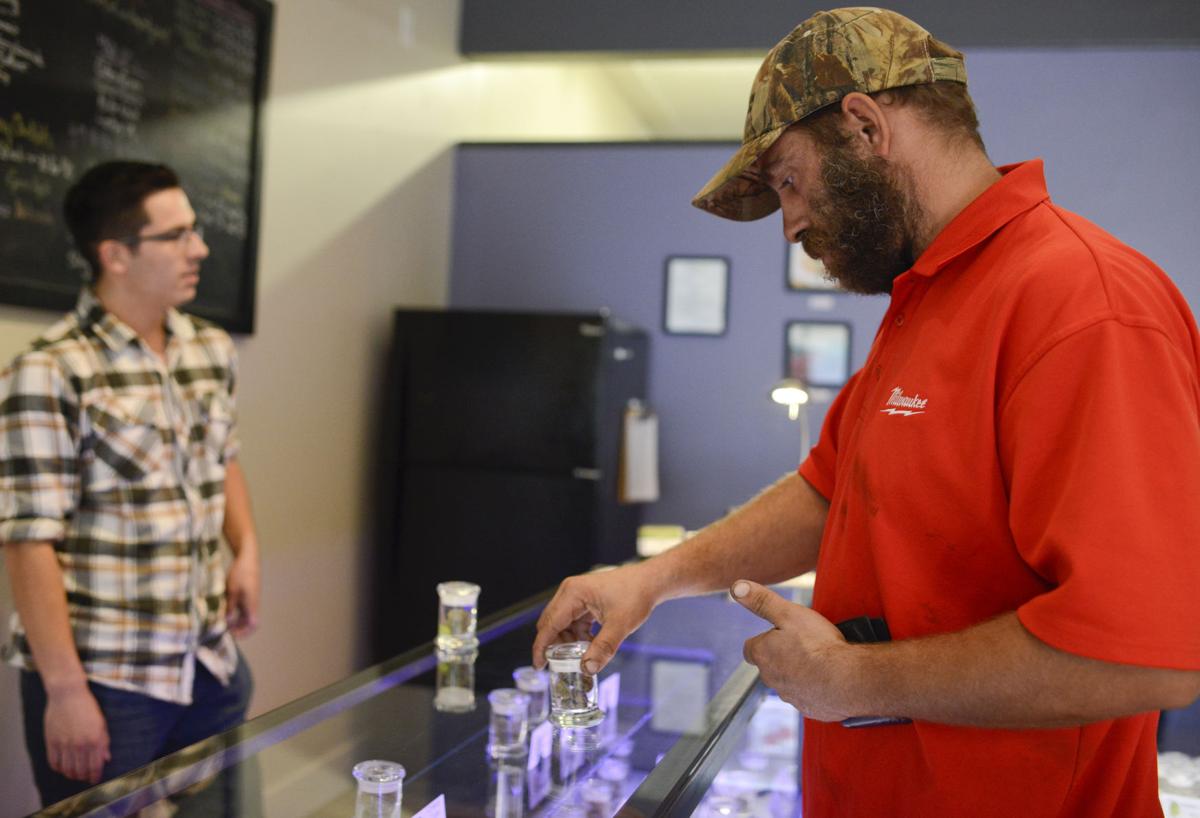 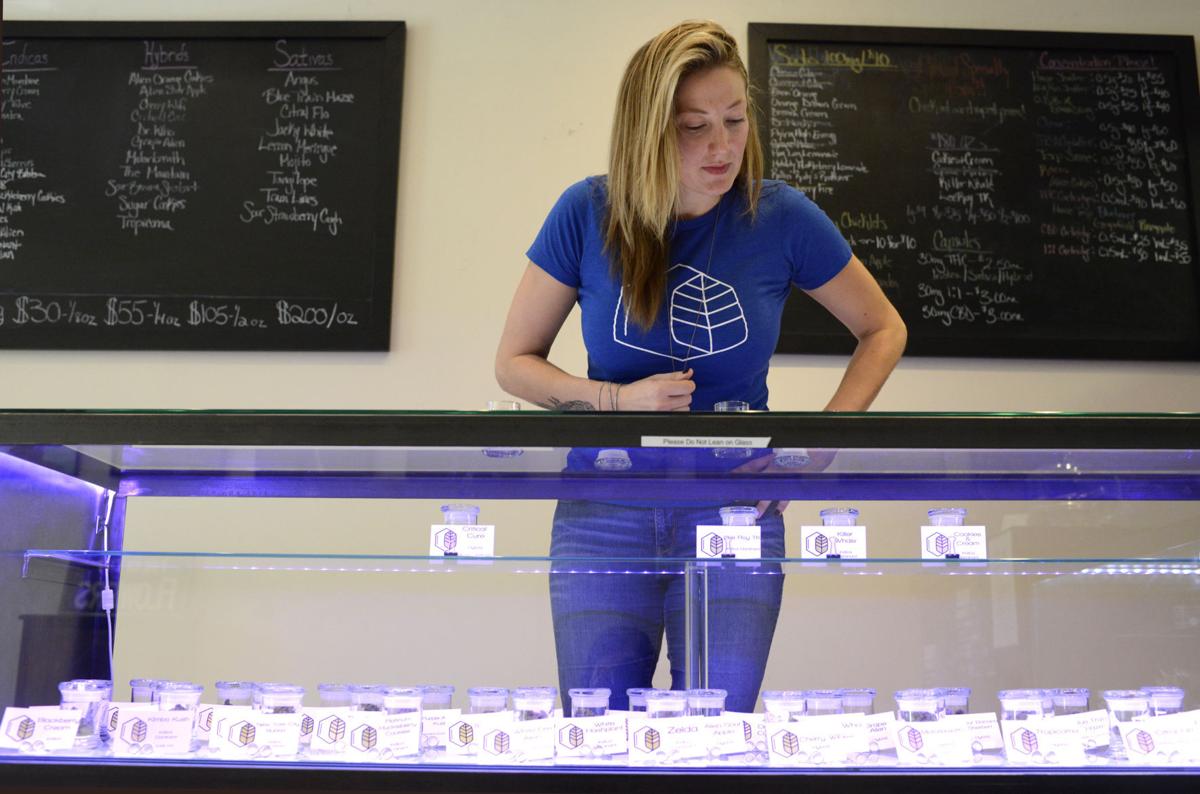 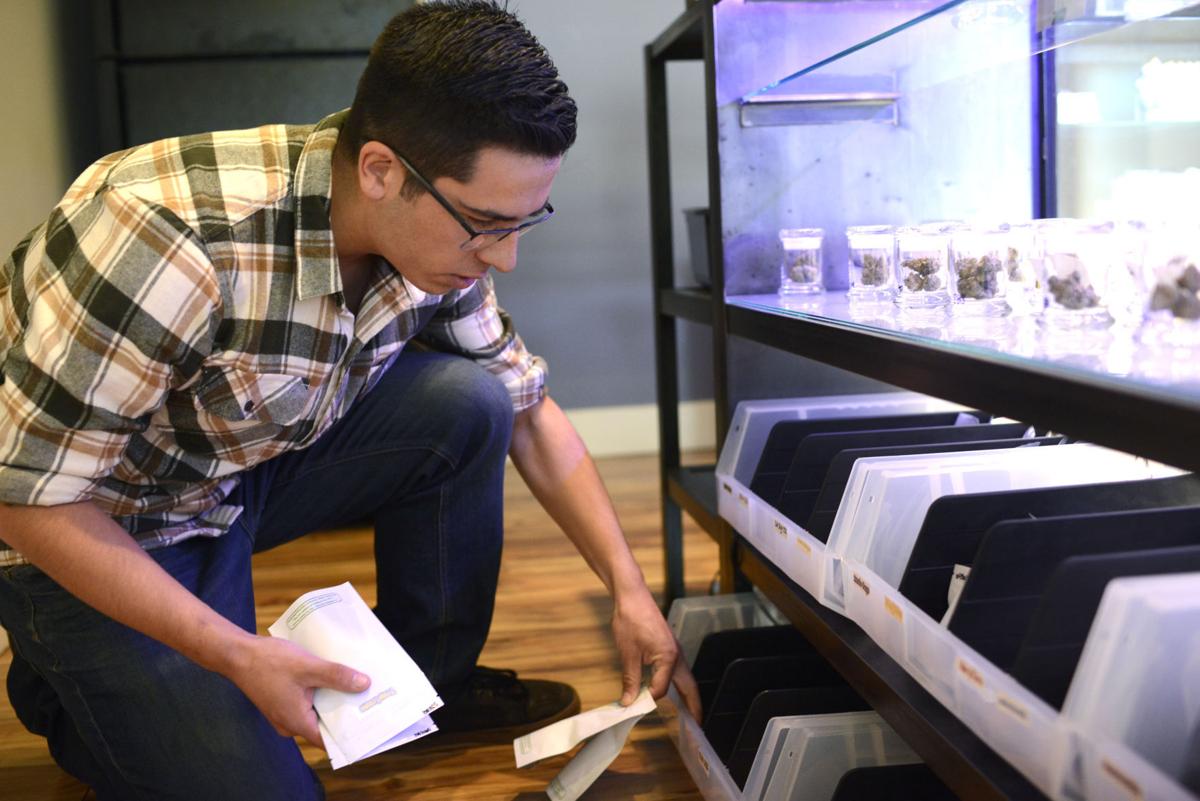 John Salazar fills an order for a patient on Friday, Sept. 29, 2017 at Spark1, a local medical marijuana provider.

John Salazar fills an order for a patient at Spark1, a local medical marijuana provider, on Friday.

John Salazar fills an order for a patient on Friday, Sept. 29, 2017 at Spark1, a local medical marijuana provider.

When Tyler Smith was diagnosed with testicular cancer, medical marijuana didn’t feel like a valid option.

He took opioids to manage the pain of nine months of chemotherapy. To balance the side effects, he took anti-nausea medication. When he stopped wanting food, he couldn’t find anything that helped.

“I knew cannabis might help, but at that point there were no safeguards around the medicine,” Smith said. “Patient accessibility and safety in this medicine is something we as a state need to learn more about.”

Smith has been cancer-free for two years. As a chemist, he wants to see safety increase around marijuana for those who still need the drug. He recently opened White Buffalo Laboratories as one of Montana’s first certified labs to examine cannabis.

Smith said without any national standards around the drug, “we don’t really know the full scope of regulations the state will decide we’ll have to operate by.”

Montana’s 13-year-old medical marijuana program has seesawed between few regulations and limited access. Upcoming program rules are supposed to change that, but many of the details are still murky.

Roughly six months from now, the state will unroll new licensing requirements for providers and, for the first time, rules around testing the quality, potency and safety of cannabis sold as medicine. The idea is similar to having health grades for restaurants.

Amid this uncertainty, the number of patients signing up for the state’s cannabis program is growing.

As of August, nearly 19,000 people qualified for marijuana prescriptions — 1,124 more than the month before. The largest set of those patients lives in Gallatin County with 3,836 cardholders.

Many providers are starting to test their cannabis before the new program requirements kick in April 30. They hope if lab results reveal an issue, they can fix it without delaying patient prescriptions.

But only two out of the state’s four young labs are open.

“We’re getting providers lined up but waiting for the department to come out with their rule making,” Smith said. “My concern is whether we have time to get into compliance to avoid a bottleneck in April.”

Montana’s upcoming regulations were set in motion last fall by a voter-passed Initiative 182. Among other things, the measure removed a rule lawmakers created that limited providers to three patients.

Before restricting providers’ size, in 2011 lawmakers pointed to the fact that 30,000 Montanans were cannabis cardholders as proof the program was too big. After years of litigation, the rules went into effect last year. Nearly 90 percent of the state’s marijuana patients lost their providers and 55 dispensaries stopped operating.

When I-182 expanded access once again, lawmakers passed Senate Bill 333 as an attempt to set up siderails to Montana’s marijuana program.

Bobby Devine, owner of Spark1 in Bozeman, said he doesn’t think all dispensaries will make the cut when the state unrolls new licensing guidelines.

“There is an industry standard that exists throughout this country, and it’s coming to Montana,” Devine said. “It’s a win-win for patients.”

But he still doesn’t know how often he’ll have to send cannabis in for testing or how much it will cost.

“I want to make sure we’re serving what’s right for patients,” Ireland said. “But we’re not big enough to be able to pay thousands for every batch we harvest.”

Labs trying to meet the demand

“With only two labs right now, we can’t leave Bozeman high and dry without anybody to test,” Brost said. “Or Billings or Missoula.”

Brost sized his lab to serve the Flathead Valley, or about 10 percent of Montanans enrolled in the medical marijuana program.

“I’m no longer concerned if there will be enough work,” he said. “I’d say 10 hours is an easy workday and it only goes up from there. Some nights, we just work through.”

Brost said the routine isn’t sustainable but it should balance out. He thinks analysis companies outside of Montana are waiting to show up until dispensaries are required to send their product to labs.

Andre Umansky said he’s worried Montana could get too many testing facilities.

His lab, Fidelity Diagnostics Laboratory LLC, has tested roughly 1,000 samples since opening two months ago. Umansky went from being the main man in the lab to training new employees to keep up. But he said that’s expected with a new industry.

Umansky thinks about three labs is the right amount to serve Montanans, though he added it depends on how many patients sign up.

“If we start getting out-of-state labs in Montana, like from Washington, they’ve had eight years to get ready and we’ve had zero,” he said.

Jon Ebelt with Montana’s health department said it’s too soon to say whether current labs can fill Montana’s needs. He said he won’t know that answer until the state’s rule-making process wraps up and he knows each lab’s testing capacity.

Ebelt said the state’s new marijuana program requirements should be out for public comment by the end of the year before they’re finalized in April. He said the state has worked with labs and providers around the country to draft the program.

As officials have researched what other states have done, Ebelt said not one has exactly mirrored the structure created by Initiative 182 and SB 333.

“The marijuana industry continues to evolve and requirements are constantly changing,” he said. “No state has developed or implemented the perfect system and states must be flexible and adaptable.”

Smith said depending on what he’s required to analyze, his young business could be looking at spending $500,000 for additional machinery. It’s also unclear what certification requirements labs will have to meet.

For advice, Smith turned to Christopher Hudalla, a chemist in Massachusetts.

When Hudalla’s state legalized medical marijuana in 2013, he was one of the people advocating it get tested.

“It just made sense, everything you put in or on your body would be tested, so why not cannabis,” Hudalla said.

The same year Massachusetts legalized medicinal cannabis, it became the first state to announce it would mandate marijuana testing. Since then, Hudalla has watched the ripple throughout the nation.

He said states trying to build regulations for an established marijuana program are similar ocean liners trying to change course.

When Oregon began testing, Hudalla said only one lab passed the state’s requirements to test for pesticides, which led to delays in testing as every provider flocked to the facility.

When Hawaii set up the program this year, initially one lab qualified to test cannabis and could only evaluate the plant’s flower. That meant patients couldn’t buy vapors, edibles or oils.

“So labs opened and in two days closed again because they ran out of flower,” Hudalla said.

He said California is an example of a state that’s worked with labs, providers and doctors while shaping safe access around the drug.

He said labs left in the middle ground should try to create policy complying with the International Organization for Standardization.

Hudalla is on a board working to set national standards to analyze cannabis with U.S. Pharmacopeia, or USP — a label on most bottles in medicine cabinets. USP establishes testing methods and appropriate limits for contaminants within commonly used drugs.

He said once those standards exist, it will be easier for states to “get on the same page.” Until then, he said each program will have its own rocky spots.

Smith said he expects some hurdles as he and his partners set up shop. But throughout the rule-making process, he’s felt like officials have listened to the concerns of people relying on the new guidelines.

“Consistency in the products, the testing and the results, I think that’s what’s coming,” he said. “I think it’s going to create a program that’s here to stay, whereas before, there was always some uncertainty.”