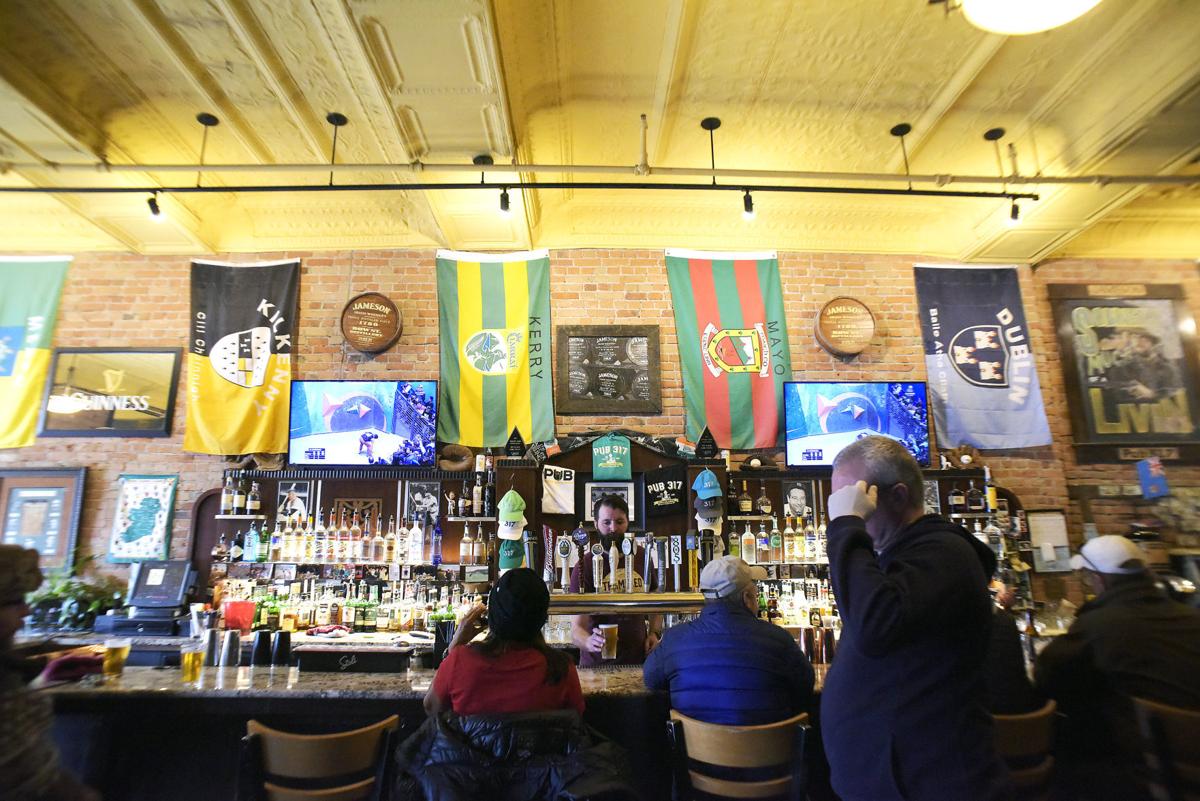 TOP: Dave Rathbun tends to a handful of guests Monday afternoon at Bar 317 ahead of a bar and restaurant closure in Gallatin County. ABOVE: A sign outside of Bangtail Bikes and Ski in downtown Bozeman on Monday reads, “The end of ski season is near.” 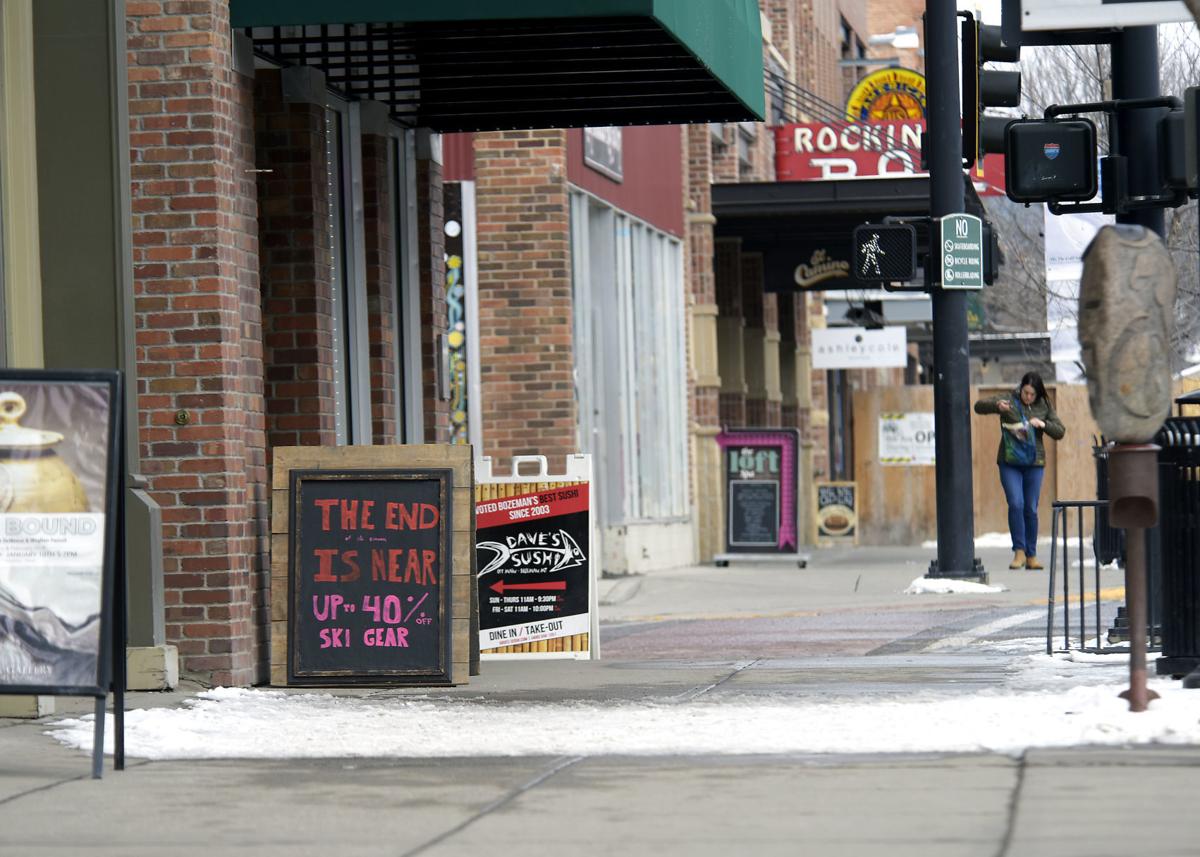 A sign outside of Bangtail Bikes and Ski in downtown Bozeman on Monday reads, "The end of ski season is near." 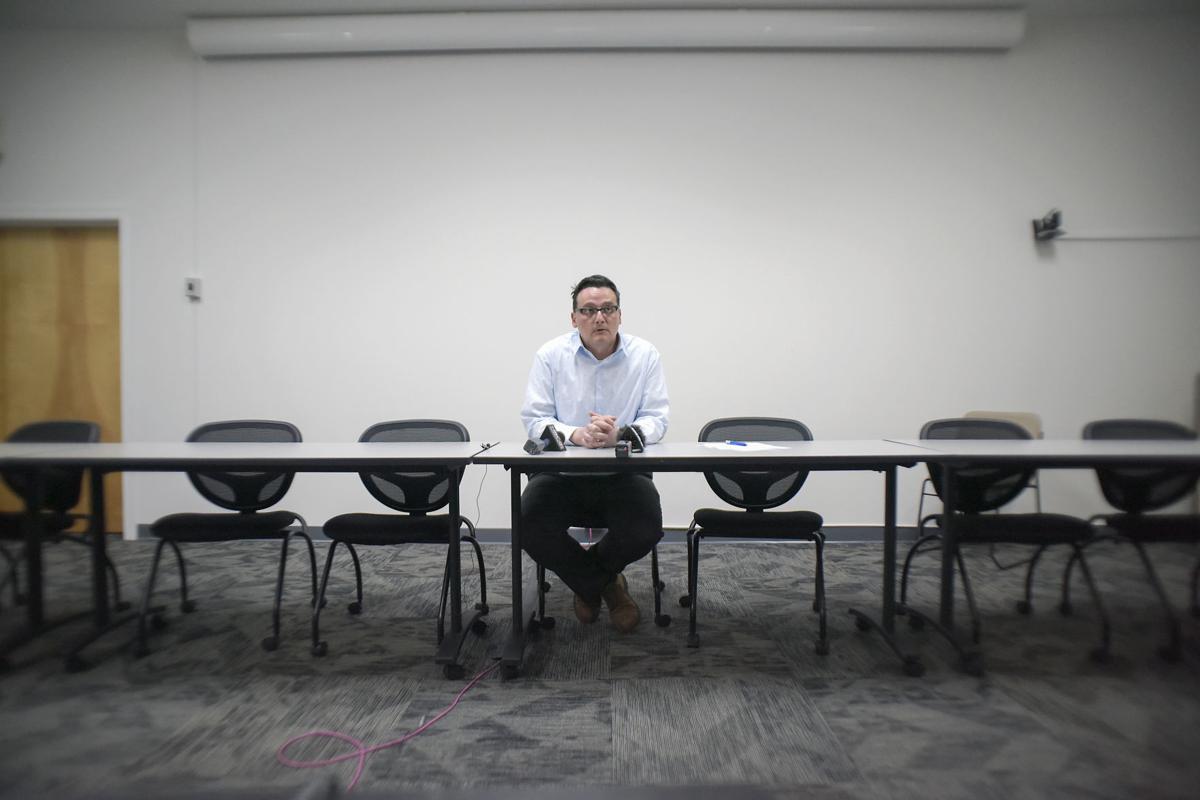 County health officer Matt Kelley talks to a group of reporters after a decision to close bars and restaurants in Gallatin County to slow the spread of coronavirus.

TOP: Dave Rathbun tends to a handful of guests Monday afternoon at Bar 317 ahead of a bar and restaurant closure in Gallatin County. ABOVE: A sign outside of Bangtail Bikes and Ski in downtown Bozeman on Monday reads, “The end of ski season is near.”

A sign outside of Bangtail Bikes and Ski in downtown Bozeman on Monday reads, "The end of ski season is near."

County health officer Matt Kelley talks to a group of reporters after a decision to close bars and restaurants in Gallatin County to slow the spread of coronavirus.

Gallatin County has closed businesses to limit the spread of the new coronavirus.

Restaurants, bars, casinos, coffee shops, breweries, wineries and distilleries with public tasting rooms have been ordered to close from Monday at 9 p.m. through March 24 at 8 a.m., according to Gallatin City-County Health Officer Matt Kelley. The closure could be extended.

“We’re trying to be part of this national effort to protect our health care system. Our health care system isn’t big enough to deal with if everybody gets the cases all at once,” Kelley said at a press conference on Monday afternoon. “We need to spread this out, and that’s what we’re doing today.”

In the wake of the announcement, Bozeman bars and restaurants said they understood the need for closures and had been preparing for them but acknowledged that shutting down will be difficult for employees.

“What we don’t want is people in the dining areas congregating, coming into close contact where they might contract the disease,” Kelley said.

There are also limited exceptions for food service establishments that are the primary food source for some people, such as Montana State University or hospital dining halls. Kelley said he is working with MSU to implement safety protocols in the school’s cafeterias.

Bozeman Police Department and the Gallatin County Sheriff’s Office will be enforcing the restrictions. Sheriff Brian Gootkin will be holding a press conference on the restrictions on Tuesday morning.

Also Monday, the city of Bozeman announced it was closing the city library and parks and recreation facilities. All non-essential city public meetings were also canceled until further notice. MSU announced that the Museum of the Rockies will be closed the next two weeks and that the spring rodeo scheduled for April 2-5 has been postponed.

Tucker Kalberg, the general manager for Bozeman Brewing Company, said the business decided Monday to close its tasting room on North Broadway Avenue for the next two weeks.

“The way we’re looking at it is we’re preemptively making the decisions we feel is the best for the community, for our staff, for our customers,” Kalberg said.

Many businesses have announced they will now offer drive-through, takeout or delivery. I-Ho Pomeroy, the owner of I-Ho’s Korean Grill on West Main Street said she will provide drive-through service. El Camino plans to offer takeout at its East Main Street bar in the coming days. Colombo’s will offer free delivery in Bozeman and pick-up outside of its College Avenue Restaurant.

Dave’s Sushi, Jam! and Barley and Vine, which are all owned by the same people, plan to offer takeout during the closures.

“Our biggest concern is our staff being able to make their bills and be able to purchase food,” said operations manager Tori Thomas.

“Obviously, this is devastating as far as our workforce goes. We’re anxiously awaiting to see what resources we can offer to the staff that we are having to layoff because of this,” Morgan said.

The Gallatin City-County Health Department decided to close bars and restaurants on Monday because there is the risk of large gatherings occurring for St. Patrick’s Day, which is Tuesday.

“Our goal in taking the actions is to slow down the spread of COVID-19 and allow our health system time to prepare, build resources and plan,” Kelley said.

“I praise the leadership of local communities for temporarily closing or limiting gatherings at restaurants, bars and other establishments,” he said in a statement. “These efforts are consistent with the public health guidance I issued yesterday. This outbreak is serious, but we still have a chance to get ahead of it and flatten the curve in Montana.”

In a press call earlier Monday, Bullock said he wasn’t issuing a statewide closure of bars and restaurants at this time. He added that the decision falls to local health department officials for now.

Gallatin County’s decision follows recommendations from the U.S. Centers for Disease Control and Prevention to limit all gatherings of 50 or more and from President Donald Trump’s recommendation to reduce gatherings to 10 or fewer.

Reporters Melissa Loveridge and Katheryn Houghton contributed to this story.

The Chronicle's ongoing coverage of the coronavirus pandemic.

Tom Wistrcill and the Big Sky Conference prepared to carry on with the league’s men’s and women’s basketball tournaments last week in Boise, Idaho.