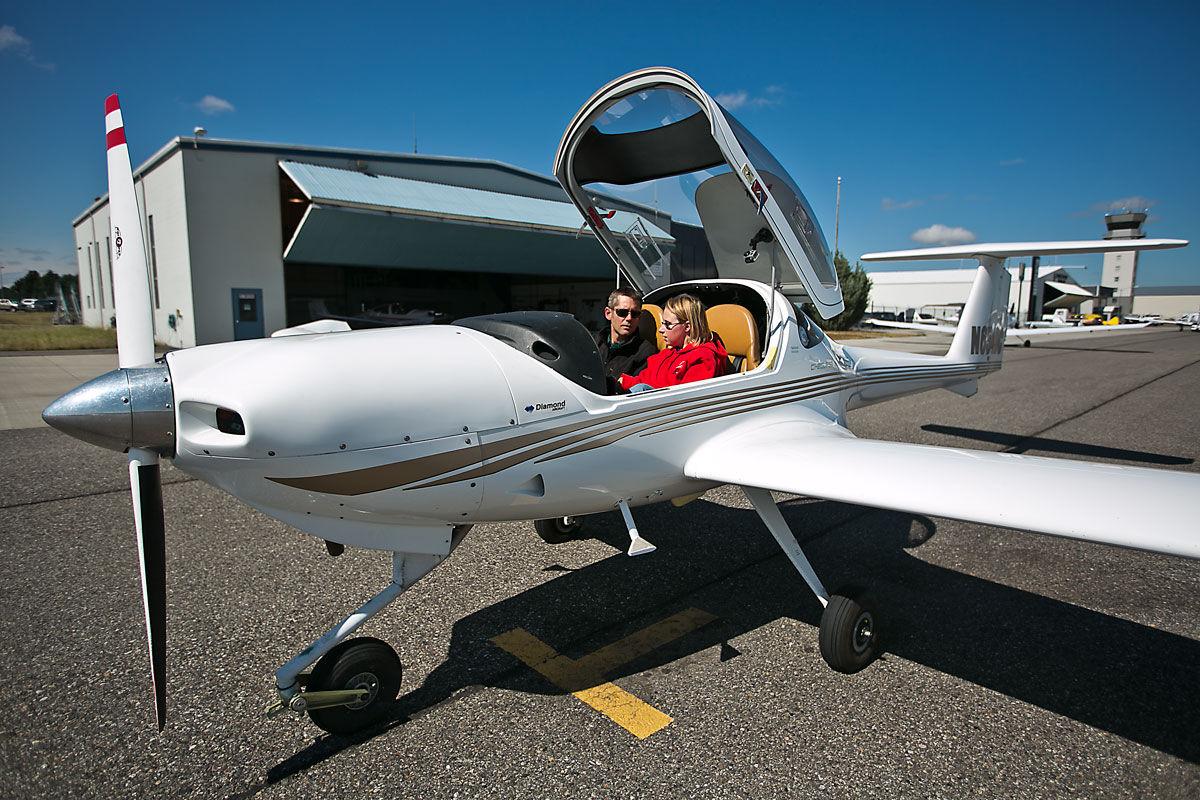 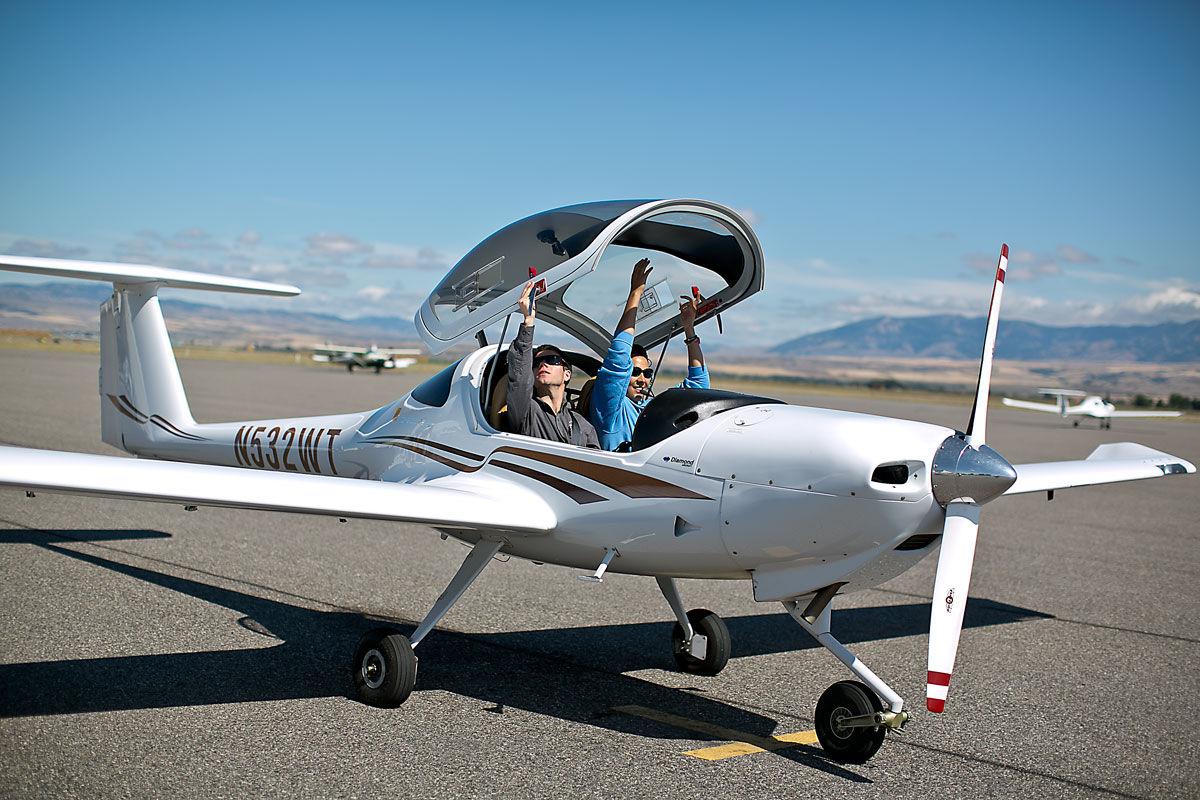 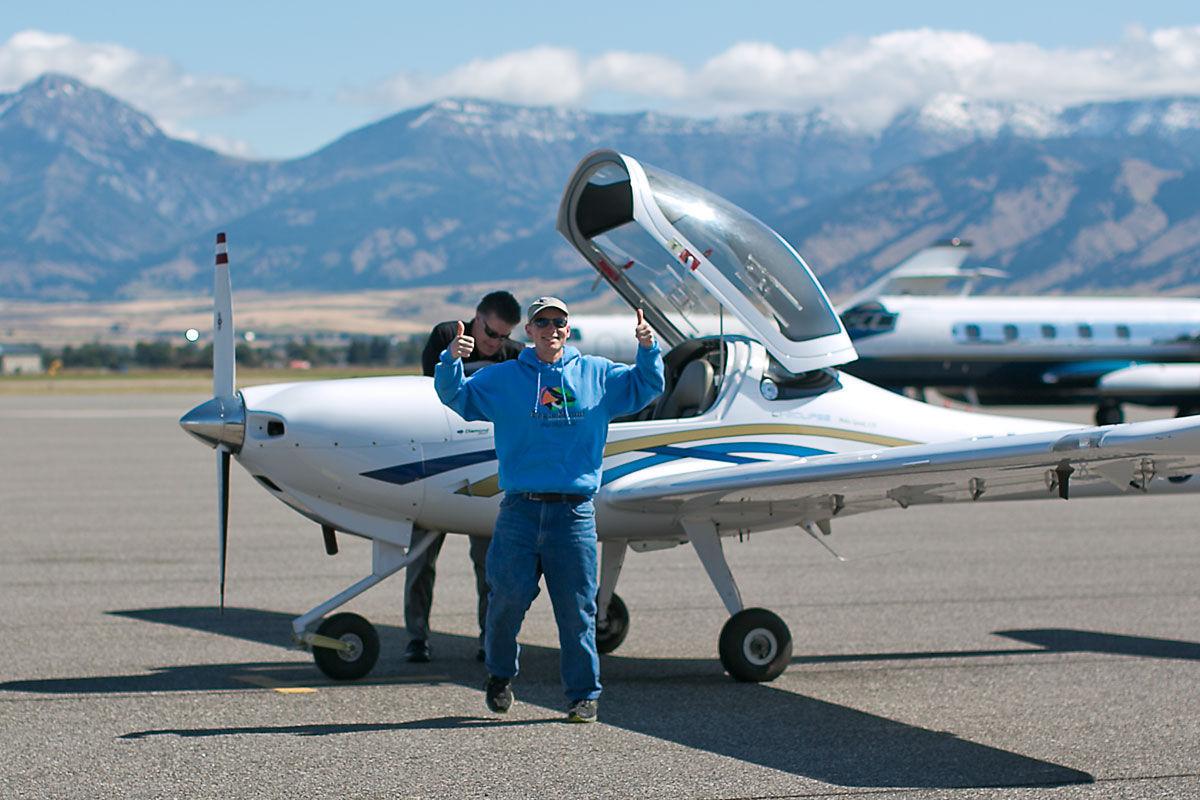 Ashley Thostenson, 22, right, an Eagle Mount member and cancer survivor, is all smiles while being debriefed by flight instructor Phillip Levy on Monday, Aug. 25, after Thostenson's first time piloting an airplane at Bozeman Yellowstone International Airport in Belgrade.

After spending an hour and a half in the sky with their flight instructors, four cancer survivors all had similar sentiments.

“You're going to hear a lot of awesomes,” said 22-year-old Ashley Thostenson shortly after her ride.

“It was awesome,” chimed in 23-year-old Cassie King.

And while 18-year-old Morgan Johnson didn't use the same adjective as the other three, he was equally enthusiastic after his ride.

“I've done some computer simulations, but this is a lot different,” Johnson said.

Monday was the first day of a free, weeklong pilot school at Summit Aviation at Bozeman Yellowstone International Airport for the four young cancer survivors.

Summit Aviation partnered with Eagle Mount to give Epp, Johnson, King and Thostenson a free week of pilot school.

The goal of the program is to have each student able to take off and land unassisted. Throughout the week, the students will intersperse flying lessons with fun activities on the ground.

Each student is paired with an instructor. Prior to their first flight Monday, students learned how to perform pre-flight checks, inspecting everything from the exterior of the aircraft to gas and oil levels and brakes and lights.

At the end of the week, the students will fly to Driggs, Idaho, on a path that will take them over Yellowstone National Park, where they will get a bird's eye view of sights like the Grand Canyon of the Yellowstone and Grand Prismatic Spring.

“She fought it really hard,” Walton said. “It was a big eye opener to see a young person go through that.”

Walton, who has been a flight instructor for about 17 years, wanted to do something to support young people with cancer, so he sought input from Eagle Mount, the cancer community and the Bozeman aviation community.

“I see how it's really an empowering thing,” Walton said of flying airplanes. “It's really something that is a life-changing experience.”

Each pilot, Walton included, is volunteering their time to teach the students, and people from around the Bozeman flying community are helping sponsor the students.

Jen Waters, director of Eagle Mount's Big Sky Kids program, said the four participants were handpicked by Eagle Mount staff, and all of them had participated in the organization's summer camp for cancer survivors in the past.

When asked what they were looking forward to most, King and Thostenson both said it would be learning new things they might not otherwise have the chance to do.

Johnson said he's also looking forward to learning new skills while getting to spend time with his friends.

And Epp hopes to spend time enjoying this state in a new way.

“Seeing the beauty of Montana from the skies. It's a totally different perspective,” Epp said.