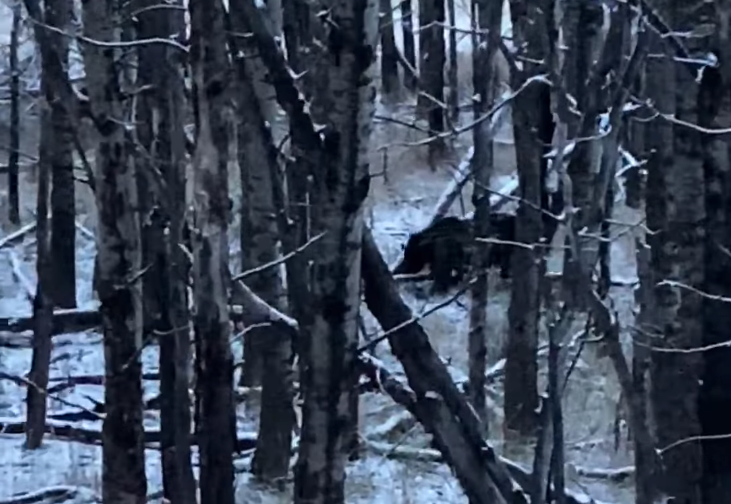 A grizzly bear is shown walking through an aspen grove near Bear Canyon. 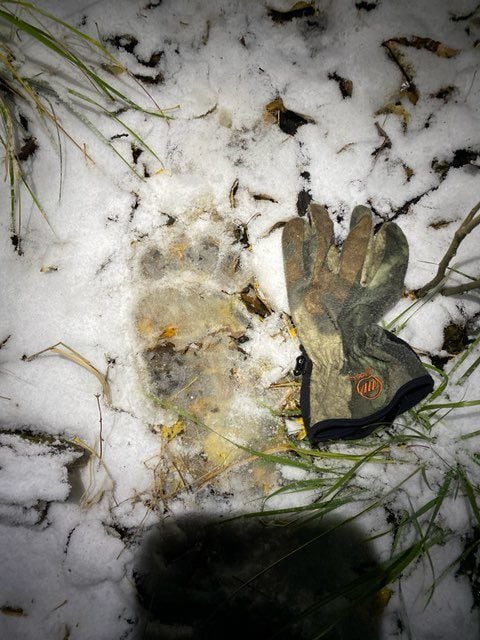 A glove sits next to a grizzly track on a ranch near Bozeman.

A grizzly bear is shown walking through an aspen grove near Bear Canyon.

A glove sits next to a grizzly track on a ranch near Bozeman.

The black mass Dash Rodman saw coming through the brush wasn’t what he initially thought it was.

Sitting in his tree stand Saturday night, he assumed it was a black bear. He was looking for deer in an aspen grove near Bear Canyon. Black bears pass through there fairly often, so he figured that’s all this was, too.

Then he got a better look.

“He popped out at about 50 yards in an opening,” Rodman said, “and that’s when I saw the hump.”

Rodman took a video on his phone, recording the bear as it sauntered by. When he talked with a Montana Fish, Wildlife and Parks biologist the next day, he got confirmation that he’d seen something he didn’t expect in that spot: a grizzly bear.

It’s the first confirmed sighting on the ranch he was hunting, the Metcalf-Hoell Ranch off Bear Canyon Road. That’s not too far from downtown Bozeman, and it was just a few hundred yards from LaMotte School.

So far, the grizzly has gone unseen since then. The school found scat near its playground, but it’s unclear whether it was from the grizzly or one of the neighborhood black bears. The snow it tracked through Saturday melted, but the arrival of a new batch may help biologists figure out if the bear’s still hanging around.

The proximity to civilization is noteworthy, but it wasn’t surprising to everybody. Renee Metcalf Thill, whose family owns the land where the bear was seen, said there have been other sightings that they weren’t able to confirm, and that it’s not at all far fetched for a grizzly to show up there. It’s only about a mile from the forest, and the forest is fairly untrammeled from there to Yellowstone National Park.

Kevin Frey, the local bear specialist, said there have been confirmed grizzly sightings all along the Gallatin Front. He and other experts think of Interstate 90 as the northern boundary of the Yellowstone ecosystem’s grizzly habitat.

He has also seen them off and on in the northern part of the Gallatin Range over the past 30 years. Just this spring, he said, there was one between the Hyalite and Cottonwood drainages.

“It’s not much of a reach for a bear to walk out in the front,” Frey said.

This bear was a subadult, he said, and it appeared to be passing through. It was likely following the creek bottoms and maybe stumbled into a gut pile left behind by a hunter. It just so happened this bear walked past a guy in a tree stand.

“If (Rodman) hadn’t been sitting in the stand when the bear walked by, the rest of the world probably wouldn’t know if the bear came or gone,” Frey said.

Rodman, a co-owner of Map Brewing, was shocked to see a grizzly there. He’s hunted there fairly often, and usually doesn’t even pack his bear spray. He happened to this time, however, and was grateful.

Especially when it came time to walk back to his truck.

“He had gone in the same direction I needed to go and that’s kind of when it got real,” Rodman said.

He’d seen the bear just before dark, and he had about a 15 minute walk to the truck. He held onto the bear spray and made noise.

He passed the tracks once. He took a photo with his glove next to one of them — the track and the glove were about the same size. He noticed the cows in the pasture were a little spooked, which didn’t calm him down at all.

But soon, he was safely back at the truck, marveling at what he’d seen.

“Just to be that close and to not really be worried because I was up in a tree, it was a pretty astounding experience,” Rodman said. “It’s going to definitely change my perspective on where I carry bear spray from now on.”