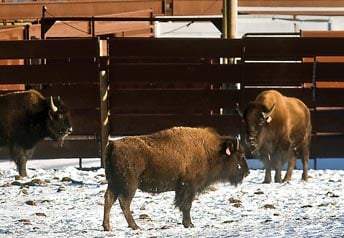 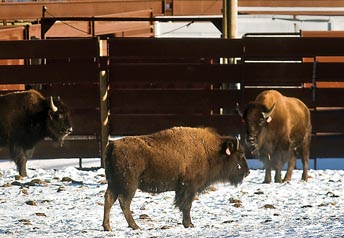 In a memo to its five-member commission, the Montana Department of Fish, Wildlife and Parks identified the Spotted Dog, Marias River and Beartooth wildlife-management areas as state-owned properties where the state could place the bison temporarily as it develops a long-term plan for wild bison in Montana.

The bison are part of an experiment to see if quarantine can be used to create herds of disease-free bison that share the genetic makeup of the bison now roaming Yellowstone National Park. As part of the 6-year-old project, bison were captured as they left the park, and those found not to have been exposed to brucellosis were kept in the Corwin Springs holding facility.

FWP identifying state land where the bison could be placed is a significant change from last year, when the state struck a deal with Turner Enterprises to place 86 Yellowstone bison on Ted Turner's Green Ranch west of Bozeman. That deal was controversial because it allows Turner Enterprises to keep up to 75 percent of the bison's offspring, but FWP argued it was necessary because it could not find any public or private groups -- including itself -- prepared to manage a herd of wild bison.

"As the state agency responsible for Montana's wildlife, it is time that we take a serious look at this big game species' management," FWP director Joe Maurier said in a written statement Monday. "Bison have been ignored as a big game species for 100 years. It's simply time to consider realistic options for its management in Montana."

According to the staff memo, approximately 50 bison must be moved from the Corwin Springs facility each year over the next two years.

FWP is asking the commission to endorse its plan to further explore those wildlife-management areas, as well as other unspecified sites, as "interim holding locations" for the bison now being held at the Corwin Springs facility. The commission will take up the proposal Monday in Helena.

No exact timeline has been developed for moving the bison. In a press release, FWP said "the goal would be to find appropriate areas that could support a huntable population of at least 50 bison." The bison will likely be confined by a fence.

"I doubt that we'll ever get to a truly free-ranging bison herd," Maurier said. "But we want to see if we can find the right place where bison can roam behind a wildlife-friendly fence."

Reaction to that plan was mixed Monday.

Mike Leahy, Rocky Mountain director of Defenders of Wildlife, said he was supportive of the move to consider wildlife-management areas for bison.

"We think it makes a lot of sense to relocate some of the bison to state lands," he said.

"FWP's plan would further the disrespectful livestock model while adding the sickening twist of hunting buffalo on fenced-in public land after they have been raised in prison since they were calves stolen from the wild," she said.

Several lawmakers hope to address relocating bison during this legislative session, including bills that would ban free-roaming bison in Montana and give county commissioners oversight of bison placed in their counties.

Daniel Person can be reached at dperson@dailychronicle.com or 582-2665.