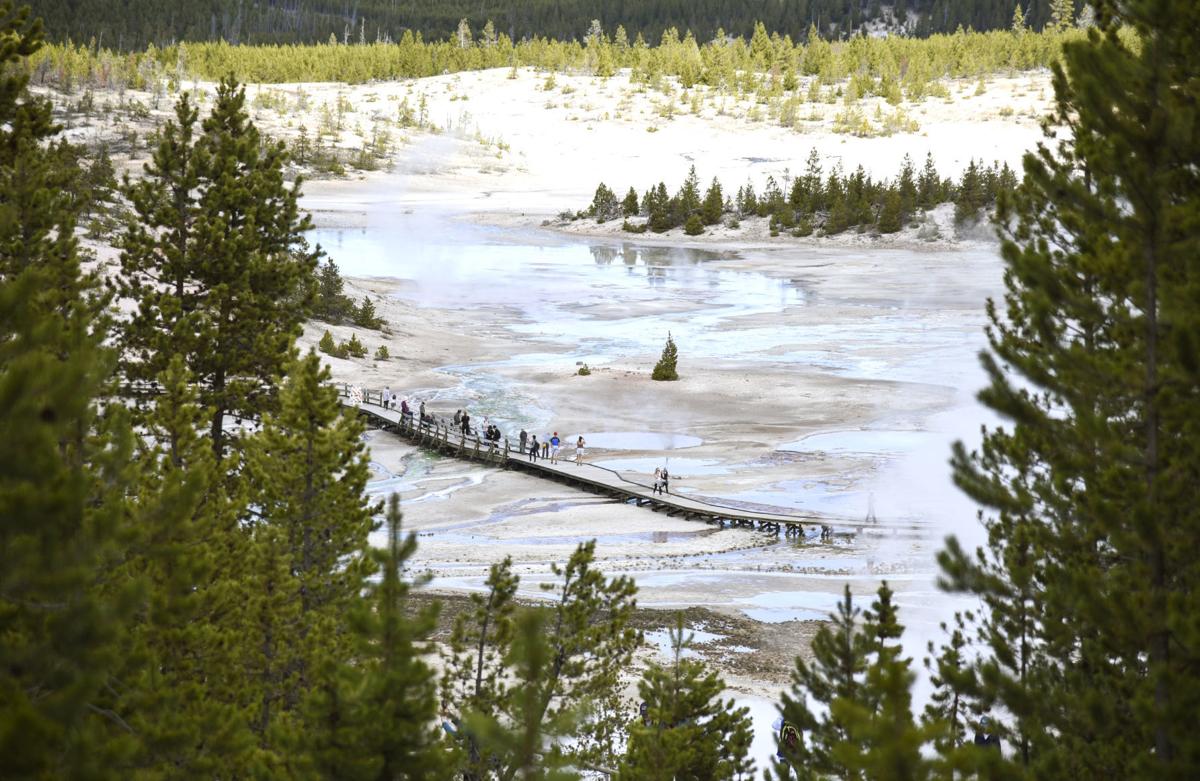 Tourists wander along the boardwalk through Norris Geyser Basin on May 15, 2018, in Yellowstone National Park. 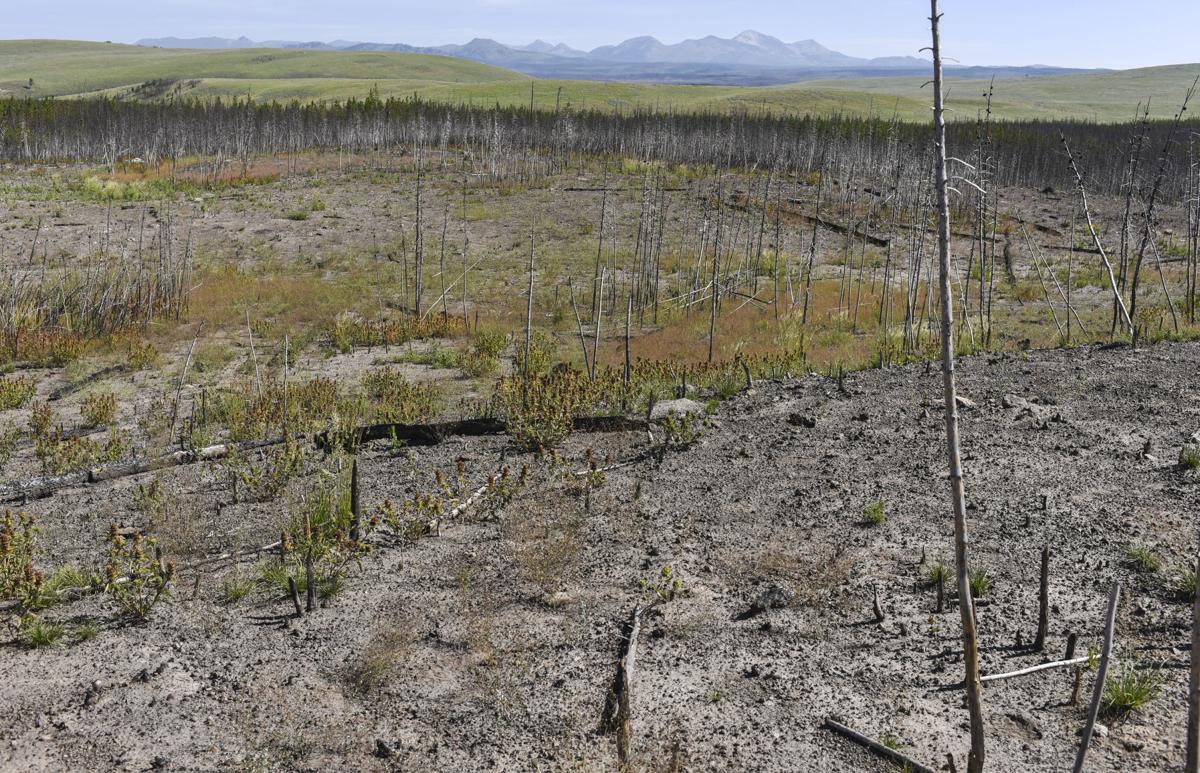 Charred lodgepole pines tip haphazardly, burned in the 2016 Maple fire that engulfed Yellowstone National Park. The Maple fire was started and burned completely within the 1988 fire scar, something that was previously thought impossible. 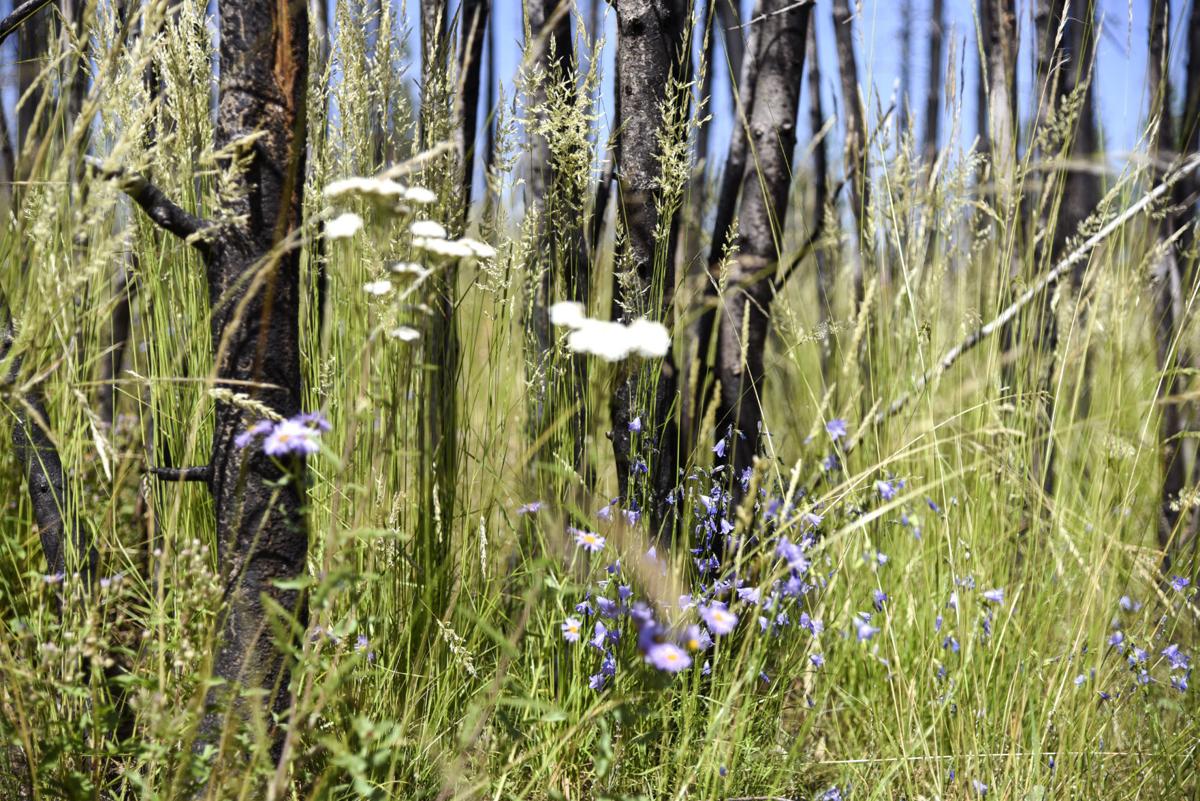 Wildflowers and grass grow thick beneath a charred group of lodgepole pines that burned in the 2016 Maple fire in Yellowstone National Park. The Maple fire began and burned in its entirety in the 1988 fire scar. 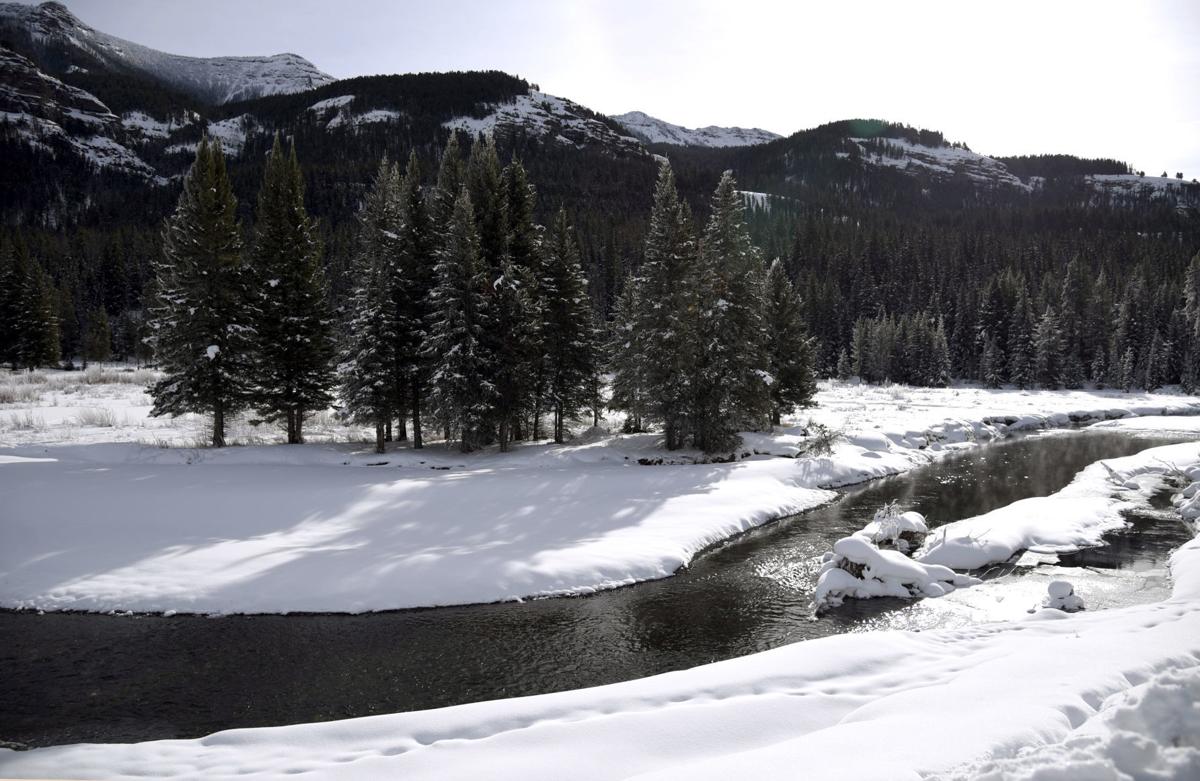 Soda Butte Creek flows alongside the Beartooth Highway in this file photo from January 5, 2018, near the Northeast entrance of Yellowstone National Park.

Tourists wander along the boardwalk through Norris Geyser Basin on May 15, 2018, in Yellowstone National Park.

Charred lodgepole pines tip haphazardly, burned in the 2016 Maple fire that engulfed Yellowstone National Park. The Maple fire was started and burned completely within the 1988 fire scar, something that was previously thought impossible.

Wildflowers and grass grow thick beneath a charred group of lodgepole pines that burned in the 2016 Maple fire in Yellowstone National Park. The Maple fire began and burned in its entirety in the 1988 fire scar.

Soda Butte Creek flows alongside the Beartooth Highway in this file photo from January 5, 2018, near the Northeast entrance of Yellowstone National Park.

"State of Change" is a Chronicle series on climate change in Montana. Chronicle journalists fanned out across the state over the last several months to report on the impacts of climate change, the changes to come and how people are responding. The series will publish over the next several weeks.

The Yellowstone scientist best known for his work on wolves is now leading a study of jays, warblers and sparrows, among other bird species. His researchers wake up obscenely early, leave the office by 3:30 a.m., and are in the woods listening for bird calls before the sun comes up.

The goal is to figure out what migratory and resident birds are living in old growth, subalpine forests consisting of spruce and fir trees — a forest type climate change could erase.

“We want to find out what lives there now,” Smith said, “so we know what we’re going to lose, essentially.”

Scientists have been predicting for years that fire activity in Yellowstone National Park is going to increase as the world gets warmer. Climate models predict more large fires and ballooning yearly burned acreage totals. There will also be less time between fires, meaning forests won’t have as much time to grow back and maybe never will.

In the crosshairs of that trend are the old forests where Smith and his team are studying birds, places where a tree’s age is measured in centuries. Smith called the areas “the most flammable forest type on the landscape.”

The mission behind the bird surveys may sound morbid, but Smith believes it’s important as climate change strains the Greater Yellowstone Ecosystem. There have already been steep declines in whitebark pine trees. Temperatures have increased. Snowpack totals have decreased. At the park’s northeast entrance, near Cooke City, there are 60 more days each year that stay above freezing than there were in the mid-1980s, according to the park. About 30 fewer days each year with snow on the ground than in the 1960s.

The transformation is going to continue, and it raises questions about what the park is going to look like in the future and how park officials should respond. Ann Rodman, a Yellowstone scientist at the forefront of the park’s work on climate change, said it confronts the National Park Service’s tilt toward preservation.

“We always look to the past and try to keep it the way it has been or try to fix it and put it back to what it used to be, and I think climate change is a challenge to that way of thinking,” Rodman said. “We have to start kind of looking at what it is we want to preserve into the future.”

Nathan Varley has seen Yellowstone change firsthand. He grew up in and around the park. His father, John Varley, was a scientist in the park for more than 30 years, broken up by a brief stint in Idaho.

The younger Varley became a scientist himself and was drawn to the park, too. He worked as a technician on some research projects, volunteered for the Yellowstone Wolf Project and later launched a wildlife tour business with his wife.

He likes the work, loves showing people around the park. The tours are also a way he can make climate change more tangible for his guests.

“It’s always a good place to talk about climate change with people and at least tell them what we feel the Yellowstone experience is,” Varley said. “It’s easy to kind of point out some things.”

Like Phantom Lake, an ephemeral waterbody east of Mammoth Hot Springs. He recalls seeing it hold water through entire summers when he was younger. Now, it’s almost always dried up by the end of summer.

Or the August smoke, a relatively new thing that he doesn’t remember happening much when he was young.

Or he can tell them about the stands of whitebark pine trees he used to know, ones he walked through while studying mountain goats.

“Those stands were so impressive,” he said. “This was before the beetle swept through.”

The mountain pine beetle epidemic that people know best happened a little more than a decade ago. Warmer winter temperatures helped the beetles reproduce more. That shift led to a big outbreak that knocked out 80% of the oldest trees in the Yellowstone ecosystem between 2007 and 2009, according to the park service.

Jesse Logan, a retired government entomologist who lives in Emigrant, said the decline was one of the first examples of a climate model prediction coming true. Logan worked for the Forest Service until the mid-2000s, and he was involved in some of the first research that predicted climate change would take a toll on whitebark pine. His work projected the trees would decline because of the beetle and other pressures — wildfire, white pine blister rust and the simple reality of the world being warmer.

A couple decades on, that’s what happened.

“It really was borne out unfortunately pretty much exactly as our models had indicated it might happen,” Logan said.

Such a drastic decline has already reconfigured pieces of the ecosystem. Grizzly bears, which eat whitebark seeds, have started to eat more meat. That shift, bear advocates argue, puts them at greater risk of being killed by humans because the bears may end up eating livestock or seeking out animals killed by hunters. Logan added that it could have lasting effects on Yellowstone’s elk. Instead of pine cones, grizzlies may turn to elk calves in the spring.

But there are several other species that need the trees, too, such as the red squirrel and the Clark’s nutcracker.

The nutcracker is integral to the whitebark pine’s reproduction plan. The bird spreads the tree’s seeds. Over time, that process gradually bumped the trees into higher elevations. They were once at the bottom of the Paradise Valley, Logan said. Now they’re found at elevations of about 8,500 feet, and he worries they can’t climb any more.

“Whitebark is already pretty high,” Logan said. “There’s not a lot of area above to occupy.”

When Smith walks around in Yellowstone’s old growth, he finds tree trunks so big he can’t get his arms around them. Some of them are 200 or 300 years old. Instead of having trees that old, climate projections for the rest of this century suggest trees may have have a hard time living to the century mark, Smith said.

“What climate change is going to do is it’s going to reduce everything to less than 50 (years old), surely less than 100,” Smith said. “We’re going to quickly burn up all the forest and everything is going to be a young age forest.”

Monica Turner, a scientist at the University of Wisconsin, has studied fire frequency in Yellowstone for years. She was part of a research team that published data in 2011 suggesting a major increase in fire frequency and a shrink in time between fires — maybe as short as 30 years or less. That prediction came true with the Maple fire in 2016, which burned more than 30,000 acres entirely within the 1988 burn scar.

That’s trouble even for the fire-adapted lodgepole pine, Turner said. In the early goings, that species may have an advantage for recovering from fire because its cones release seeds during a burn. But that advantage disappears if the trees start burning before they produce seed-bearing cones, Turner said.

But she agreed that the forests where Smith is looking for birds are in the most danger.

“It takes them a long time to regenerate after a fire,” Turner said. “The seed has to disperse from living trees that survive ... and then they’re going to have to establish in a warmer climate.”

A paper that’s expected to be published later this year that she worked on with Winslow Hansen, a postdoctoral fellow at Columbia University and Bozeman native, showed that the northern portion of Grand Teton National Park could lose up to 35% of its forested area to climate change.

But the same research shows a massive difference in what’s lost if the world stabilizes carbon emissions by mid-century.

“There’s still warming, but you don’t lose nearly as much forested area,” Turner said. “There is a decline but it wouldn’t be anywhere near as dramatic.”

Bart Melton, the wildlife program director for the National Parks Conservation Association, said reducing emissions is by far the most important thing to address in dealing with climate change. Without that, he expects big changes and a wide variety of tough questions for park managers.

Regardless, he also sees national parks partially as a laboratory — a place where what’s coming can be tracked.

“First and foremost, we need to make sure parks are intact, that we’re utilizing them to understand the change that’s coming and making sure that information is public,” Melton said.

For Smith, that means keeping an eye on the birds.

His research will create baseline data for what bird species are there. It could inform policy changes meant to preserve old growth, he said. But it’s also about recording what’s there for posterity.

“Yellowstone is not known for its tweety birds,” Smith said. “No one cares, or sees them, or knows about them. Yet as a park manager, I feel it’s our job to figure out what we’ve got before we lose them.”

He said climate change will “re-sort where everything lives.” Some of the birds he’s studying can live elsewhere, but some need old trees, like the golden-crowned kinglet.

The thought of those forests going away bugs him a little. Especially when he’s on his way from the Soda Butte Valley toward Cooke City, the park’s northeastern corner, where there’s still some thick old growth.

“Every time I drive through it I look at it and get sad,” he said. “Because I’m thinking, ‘How long is this going to last?’”