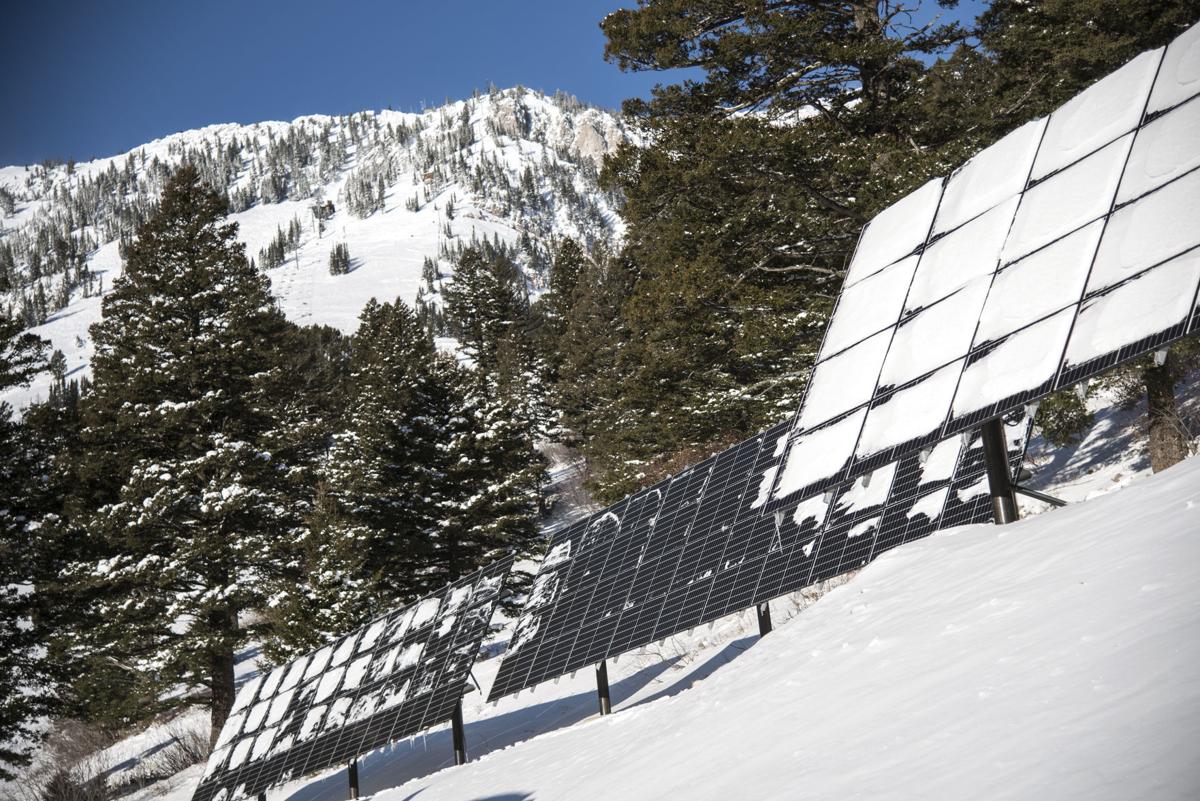 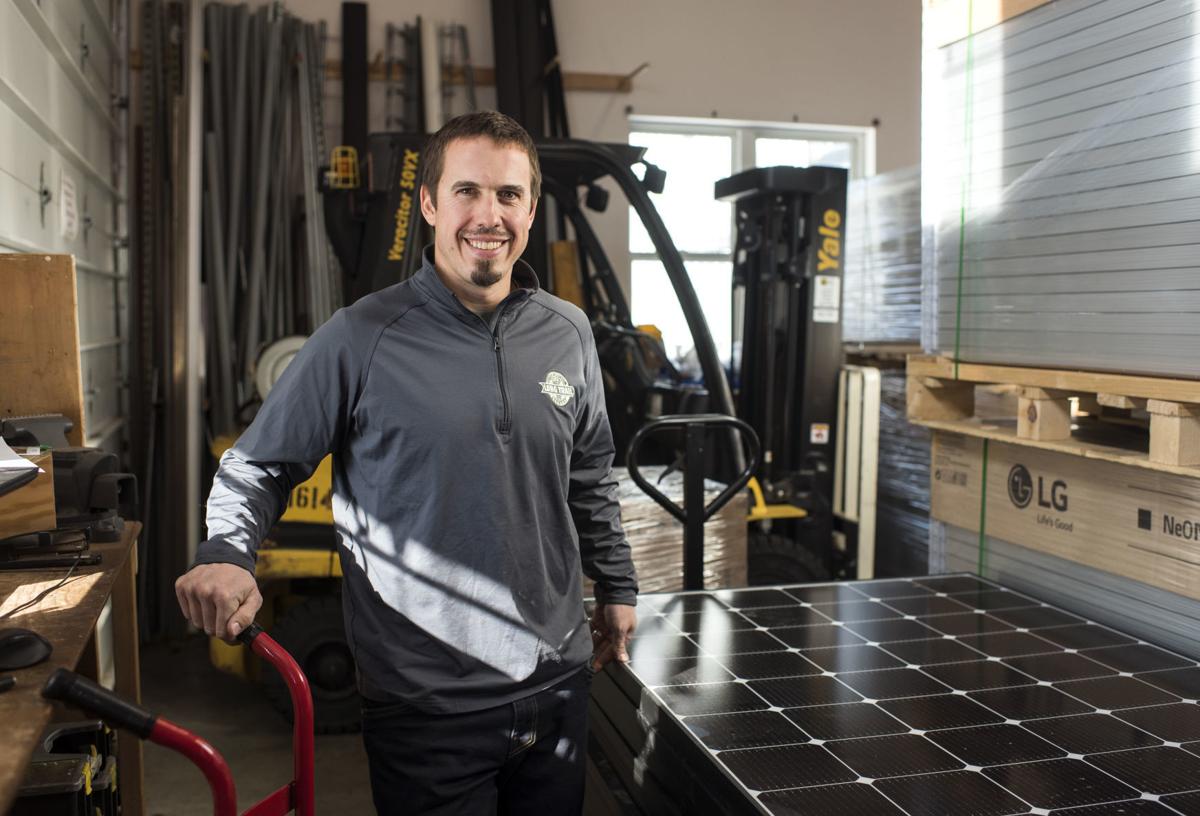 Conor Darby, co-founder of OnSite Energy, poses for a photo in the company's main office and shop space on Oct. 29, 2019. 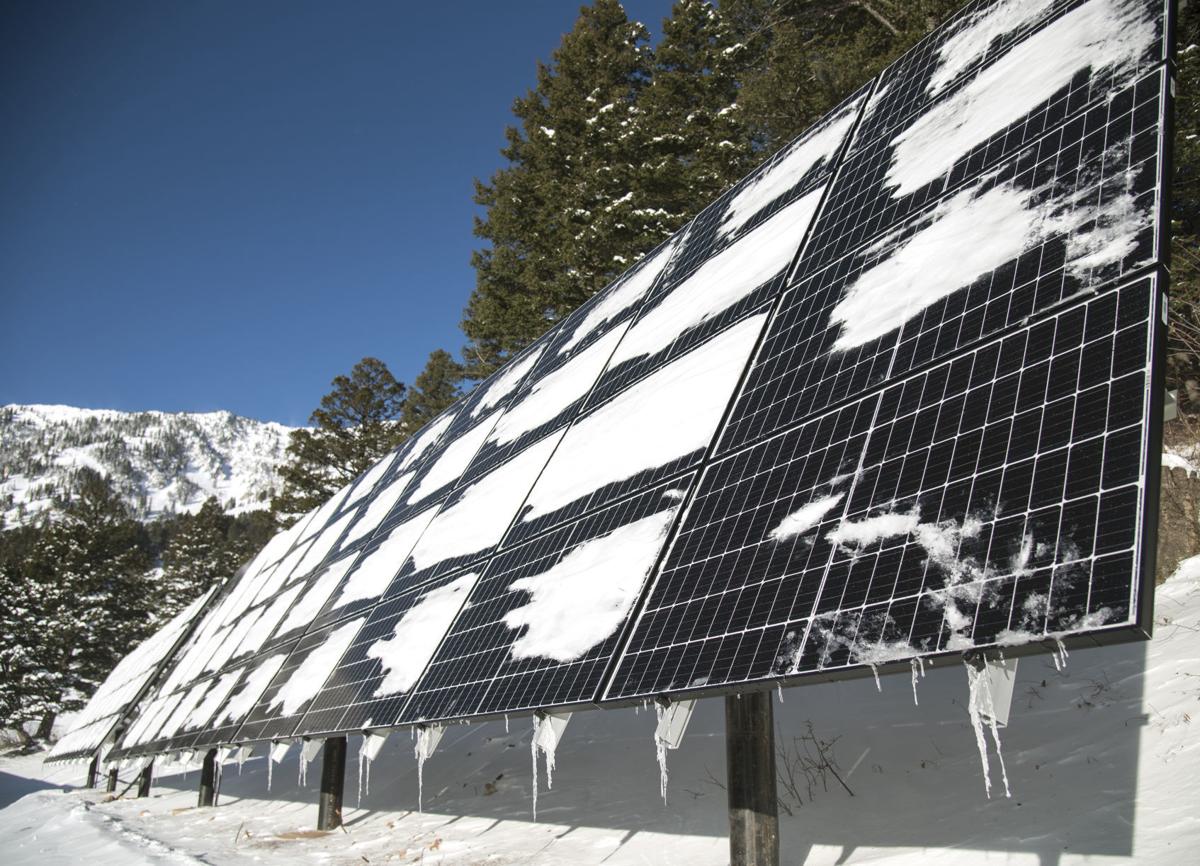 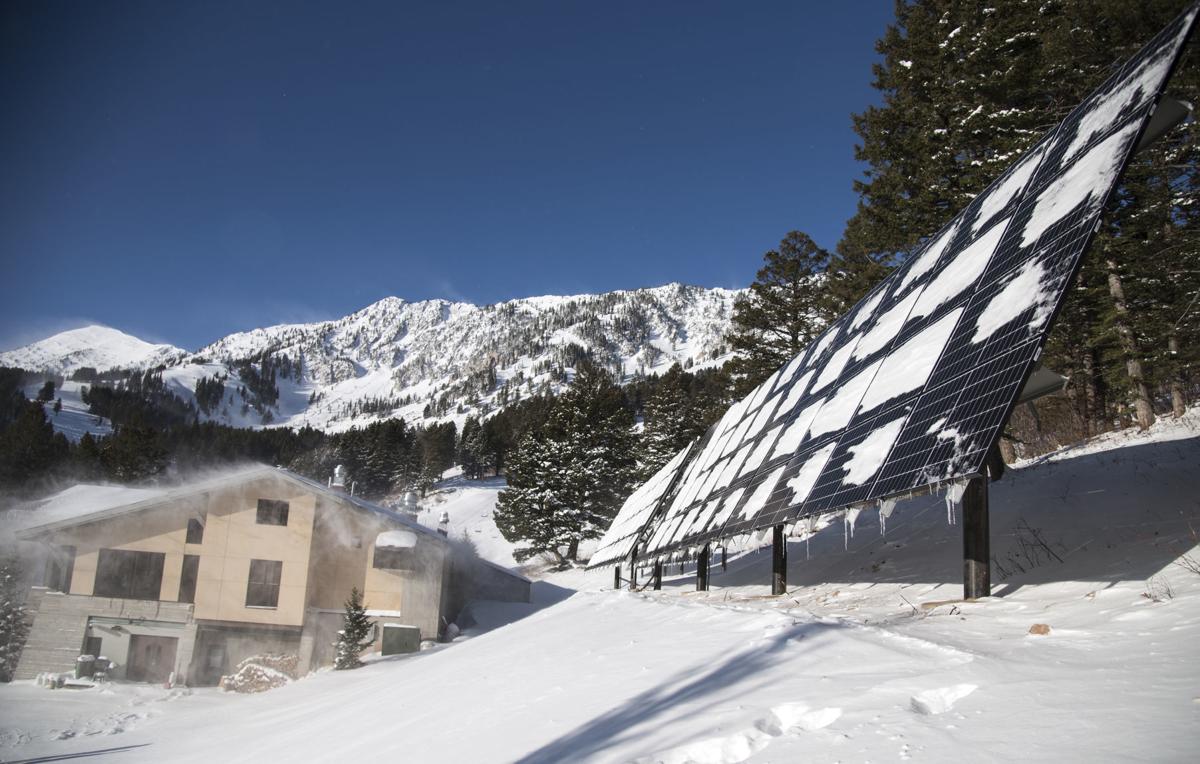 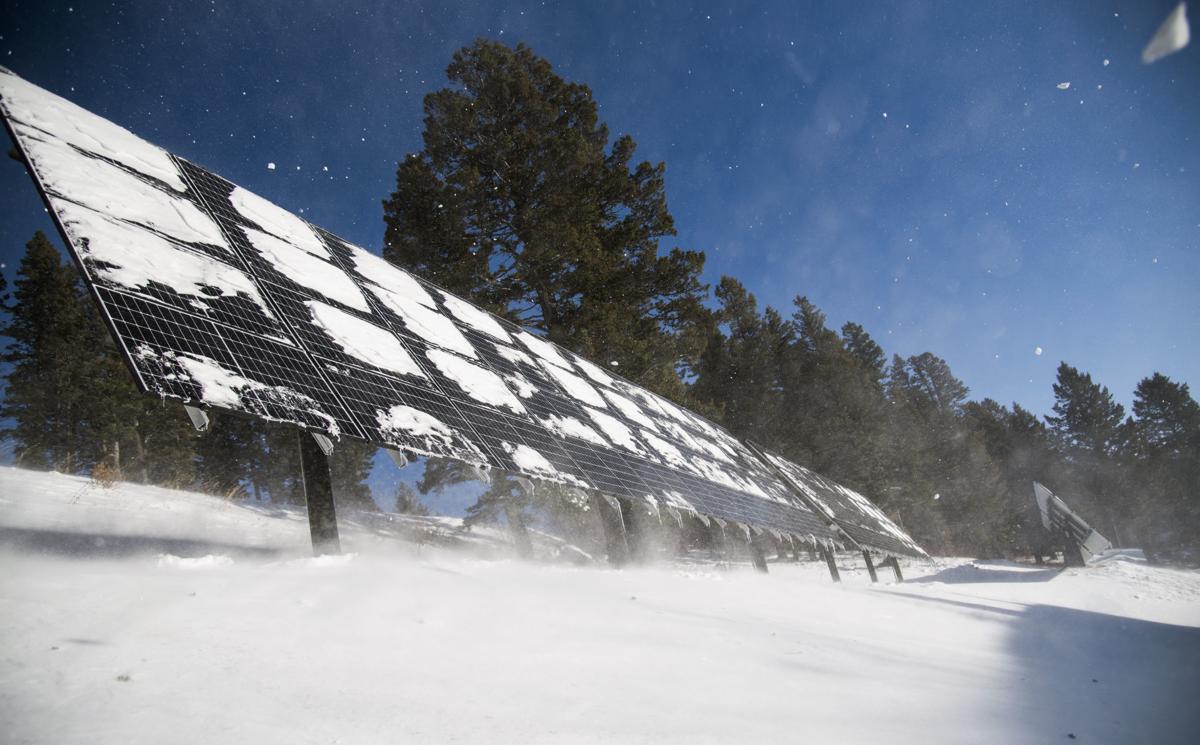 Conor Darby, co-founder of OnSite Energy, poses for a photo in the company's main office and shop space on Oct. 29, 2019.

The 160 panels stand at a steep angle behind Deer Park Chalet, visible from the Virginia City chairlift and occupying space that’s always been off-limits to skiers. They sit on a particularly sun-soaked part of the mountain and are designed to allow powder to slide right off.

Bonnie Hickey, sustainability director at Bridger Bowl, said that in the face of climate change, the ski area wants to ensure its key resource — snow — sticks around. In part that means cutting back on the use of fossil fuels that emit carbon into the atmosphere, causing the planet to warm.

“Bridger Bowl as an entity, and the people who work there, love and respect the outdoors and the environment. And along with that comes a desire to protect it,” Hickey said.

However, Montana hasn’t kept up with solar growth around the U.S. There are a number of reasons for that, like policymaking that caps benefits to solar use and challenges in integrating solar energy into the state’s electrical grid.

Places like Bridger Bowl are working to navigate those barriers.

Hickey’s position as sustainability director was added last fall so someone could focus full-time on making Bridger more environmentally friendly. But the nonprofit ski area has been taking steps to reduce its environmental impact for years.

OnSite Energy in Bozeman installed Bridger’s solar array. Conor Darby, co-founder of the company, said he began talking with Bridger about installing solar panels back in 2007. But at that time, solar installations were much more expensive.

Darby has worked in the residential solar industry since 2005, and started OnSite in 2012. He said that when the price of materials used to make solar panels dropped, his business changed dramatically.

The U.S. Department of Energy reports that since 2014, the cost of solar photovoltaic panels has been cut nearly in half.

In a 2018 study, researchers from the Massachusetts Institute of Technology found that government policies that stimulated market growth over the last decade accounted for 60% of the cost decline. Those policies included requiring energy portfolio diversification for utilities, feed-in tariffs and a variety of subsidies, according to the study.

Technological advancements also significantly affected the price drop, like  improved production and better conversion efficiency — or “the amount of power generated from a given amount of sunlight.” The study notes that there are a multitude of other, smaller factors that have also contributed to the price decline.

Before 2014, most of OnSite’s customers were motivated to use solar energy instead of fossil fuels for environmental reasons. But now, Darby said, the financial benefits of solar guide that motivation.

“The payback demonstration that we were providing, that just made too much sense not to do it,” Darby said.

That opened the door for Bridger Bowl to consider the project once again. Since the ski area is a nonprofit, Hickey said it’s important that it takes on new projects conservatively. Bridger was able to secure a $27,000 incentive from a NorthWestern Energy program. The total cost of the project was $110,000.

The Efficiency Plus Program allocates money for renewable energy projects from ratepayer dollars, and was created by state law. It’s an incentive rather than a grant because it's only available to nonprofits or government entities who match the money awarded and include an educational component to a project, according to Danie Williams, NorthWestern Energy's manager of energy efficiency and demand side services.

In rough estimations, Bridger’s solar system will be able to power the Snowflake chairlift, two conveyor lifts and the patrol building, which houses Eagle Mount and the Bridger Ski Foundation. The panels will also offset between 50% and 65% of the ski hill’s snowmaking operation, Hickey said.

Hickey said the size of new solar array is what Bridger can afford right now. It will generate 50 kilowatts of power, which is the maximum allowed by state law for net-metering for NorthWestern Energy customers.

That policy and others have put constraints on solar development. Net-metering is required by law and allows people who generate their own electricity to export the energy they don’t use back on the electric grid. In return, they get credit on their utility bills. But that’s capped to 50 kilowatts for customers of NorthWestern Energy, Montana’s largest utility, and the Montana-Dakota Utilities' service areas.

Brian Fadie, clean energy program director for the Montana Environmental Information Center, said that number is arbitrary. While 50 kilowatts is more than enough for a residential property, there are property owners who could benefit from much larger solar systems, but they're limited.

This cap is applied per address, not per meter. For example, Bridger Bowl has 15 meters, but is limited to the 50 kilowatt cap for the entire property.

Some lawmakers and solar advocates have pushed to update that regulation, but have not yet been successful. NorthWestern has lobbied to keep the cap.

Further, NorthWestern is asking the Montana Public Service Commission to allow an added fee for net-metered energy charged to customers with new residential solar installations. The proposal is part of a larger request NorthWestern is making to raise rates for its Montana customers.

Jo Dee Black, spokesperson for NorthWestern, said that proposal aims to balance out the rates paid by rooftop solar owners and other customers, who bear the cost of maintenance of the electric grid. She said it would only affect customers who install rooftop solar after the regulation change.

Solar advocates argue that the fee would shut down the rooftop solar industry in Montana.

“To go after a small jobs industry, if you will, that's important to Montanans, as consumers, and represents less than a percent of the energy supply to the NorthWestern load base, I personally find it offensive,” Darby said.

The Public Service Commission is set to decide on the request sometime before the end of the year. The commission was accused of bias against solar energy in response to another case concerning an 80-megawatt solar project that wants to sell to NorthWestern. That issue will be decided in Montana’s Supreme Court.

Fadie also takes issue with NorthWestern’s Resource Procurement Plan, which outlines where the company could get energy to meet customer demand in the coming years. He said the plan uses inappropriate models that leave out important factors to estimate the price of utility-scale solar projects, making them look more expensive than they actually are.

This means the company will likely forgo working with more solar, Fadie said. Right now, solar only accounts for .14% of Montana’s energy generation.

“In my mind, it’s pretty clear when you read this thing that the company’s goal to build a bunch of natural gas plants,” Fadie said.

Fadie said NorthWestern Energy has shown a clear pattern of being resistant to renewable energy.

In response, Black pointed to the utility’s energy portfolio for Montana, which shows 61% of its energy is carbon-free. Most of that comes from hydroelectric dams. But, the company isn’t ready to go all in on energy sources that are dependent on the sun shining and wind blowing, Black said.

“Renewable energy is a very important part of our portfolio and we’ve made a lot of investments in it, but we also have to have energy that’s available when our customers need it most,” Black said.

Policy, regulation and utility decisions are all out of the solar industry’s control for the most part. Regardless, new solar technologies are being developed all the time.

Darby said that after a decade of rapid growth in the manufacturing and installation of solar panels, the next decade will bring innovation in storage, control and monitoring of the energy they produce.

“Some of the most rapid advancements are in software, I mean, the engineering space is so far ahead of the policymaker space,” Darby said.

On top of technological advancements, the solar industry is working on public perception of solar energy. Darby said projects that are highly visible like the one at Bridger Bowl will aid in that goal.

“Every single skier going up the Virginia City chairlift — you're talking about thousands of impressions on people going by and seeing this big beautiful solar array behind the chalet ... That’s such a huge message,” Darby said.

This story has been updated to state that NorthWestern’s Resource Procurement Plan outlines where the utility could get energy to meet customer demand in coming years.

Trial by fire: What more wildfires mean for those in the smoke