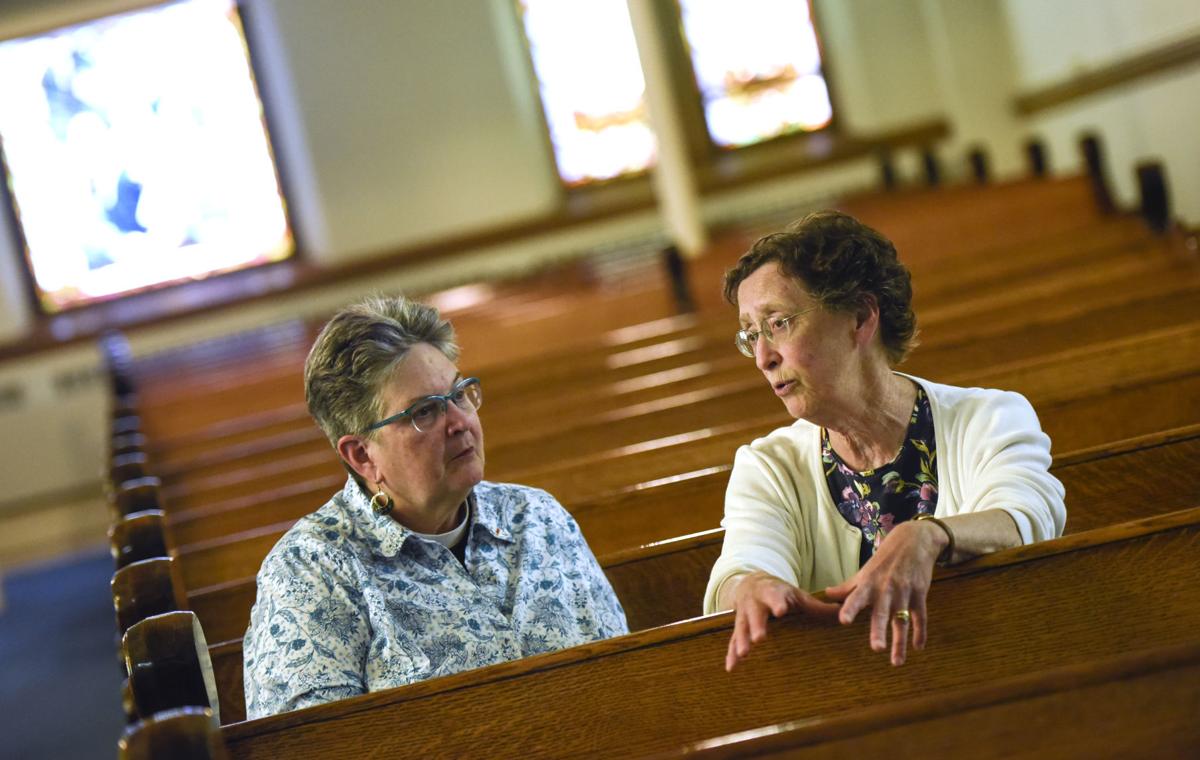 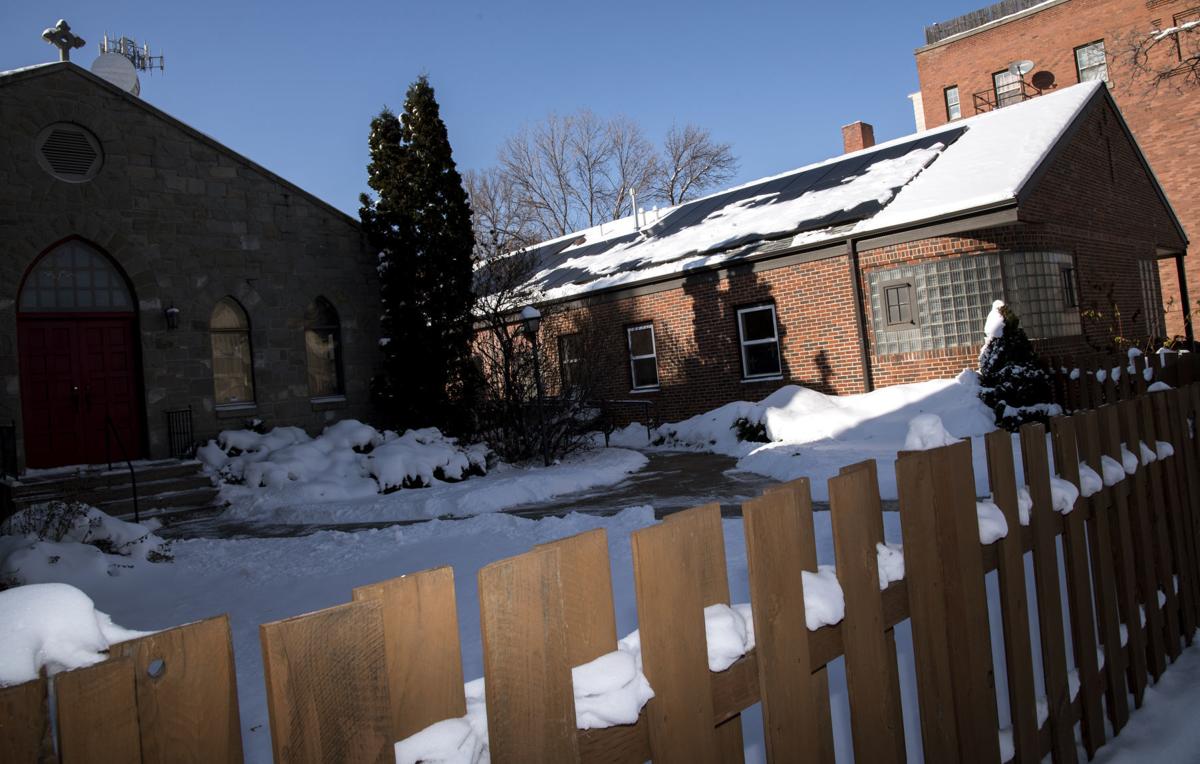 St. James Episcopal Church is nearly finished installing solar panels on the roof of the Todd Center on Tuesday, Oct. 29, 2019, behind the church. St. James will be the first church in town have solar panels installed.

St. James Episcopal Church is nearly finished installing solar panels on the roof of the Todd Center on Tuesday, Oct. 29, 2019, behind the church. St. James will be the first church in town have solar panels installed.

To help fight climate change, a growing number of Montana churches are looking to the heavens.

St. James Episcopal Church and Resurrection Parish are the first churches in Bozeman to install solar panels to draw energy from the sun and reduce the need to burn fossil fuels.

“They’re connecting them today,” Rev. Connie Campbell-Pearson, a deacon at St. James Episcopal Church, said Tuesday. “Oh my gosh, I’m so excited. I wish every congregation of faith in the state would.”

“At its roots, climate change is a moral issue,” said Will Wright, co-organizer of the creation care ministry at Bozeman’s Resurrection University Catholic Parish.

St. James and Resurrection Parish are two of the Montana churches, from Lewistown to Missoula, whose members see climate change as real and who are taking action.

They believe it's their duty to protect God’s creation.

Wright pointed to Pope Francis’s 2015 message, Laudato si, “On Care for Our Common Home.” The pope wrote that we are at “a critical moment of history” with the threat of global warming. He called on all people to protect the Earth for coming generations.

Resurrection Parish’s congregation raised $90,000 from grants and donations to pay for the solar panels, which will be installed over the next two weeks.

“It’s fantastic to see an abstract idea become a concrete reality,” Wright said. “Faith is meaningless unless it comes with action, in my opinion.”

In Bozeman, St. James Episcopal Church started installing solar panels a few weeks ago at the 129-year-old stone church’s Todd Center building. The church won a grant from NorthWestern Energy for more than $20,000, which will pay half the cost, Campbell-Pearson said.

Another sign of growing concern in the faith community about climate change was Montana’s first Faith, Science & Climate Action Conference, held in October 2018 in Bozeman.

Two Bozeman church leaders who helped organize the conference are the Campbell-Pearson, 67, and the Rev. Jody McDevitt, 64. McDevitt is co-pastor of First Presbyterian Church with her husband, the Rev. Dan Krebill. McDevitt said they are putting solar panels on their own home.

“The Earth is a sacramental, holy place,” she said. “It gives us everything we need … and we are poisoning all of it.

The Bible also teaches Christians in the gospel of Matthew to feed the hungry, clothe the naked and care for the sick, yet climate change often hits the poor and other marginalized people hardest, she said. “That’s a huge motivator for all of us.”

McDevitt had an epiphany when she heard climate scientist Katharine Hayhoe speak in 2015 in Salt Lake City at the Parliament of World Religions.

“She flipped my mind from thinking climate change is one of many issues” needing urgent attention, like hunger, disease and women’s empowerment, McDevitt said, “to putting it at the top.”

In Montana, wildlife and the environment are already stressed by hotter, 90-degree days in summer, she said.

If Americans think we have too many immigrants coming here now, Campbell-Pearson said, just imagine what will happen if vast swaths of the planet become too hot to live in.

“The problems will be exponentially magnified,” she said. “It’s huge. It’s going to affect everything.”

McDevitt stressed that the interfaith climate group welcomes Jews, Buddhists, Muslims and all faith groups. Campbell-Pearson noted Native Americans teach that the land is sacred and we need to consider the impact of our actions on the next seven generations.

“What kind of world are we leaving to our great-great-great-grandchildren?” she asked. “Is profit all we’re interested in?”

Katharine Hayhoe is an evangelist preaching a hopeful gospel on climate change.

Hayhoe — an atmospheric scientist from Texas Tech University, the daughter of missionaries and wife of an evangelical pastor — has become a rock star on climate change, named by Time magazine in 2014 as one of the 100 most influential people.

She seeks to bridge the gap between science and faith and inspire people to act on climate change by giving lectures around the nation and posting short “Global Weirding” videos on YouTube to explain climate science to the public.

“As a Christian, I believe that God created this incredible planet that we live on and gave us responsibility over every living thing on it,” Hayhoe said, “and furthermore I believe that we are to care for and love the least fortunate among us.”

Hayhoe spoke to the audience at Montana’s first Faith, Science & Climate Action Conference last fall live via video link, having cut back her in-person appearances to reduce her airline flights and carbon footprint.

One of her messages is that scaring the pants off people doesn’t work. Fear doesn’t motivate us to take action.

“What we need to fix this thing is rational hope,” Hayhoe said. “We need a vision of a better future, a future with abundant energy, a stable economy and … where our lives are not worse but better than they are today.”

Texas, she said, has more than 25,000 jobs in wind energy. The state gets more than 25% its energy from clean sources like wind and solar. Fort Hood, the Army’s largest base, is using wind and solar and saving taxpayers millions in energy costs.

The good news is that the world is changing, she said, but just not fast enough to stop climate change, unless more people join the effort.

“By working together, we can fix it,” Hayhoe said.

The nonprofit advocacy group has 20,000 congregations as members in 40 other states and sees “global warming as one of the biggest threats facing humanity today.”

“Climate change is the greatest moral challenge of our time,” Bingham said. “You cannot profess a love for God and let what God loves be destroyed.”

The interfaith group contends “the very existence of life … is jeopardized by our continued dependency on fossil fuels for energy.” One thing the national nonprofit does is show local church groups how to measure and reduce their carbon emissions.

A Montana chapter of Interfaith Power & Light is now being formed, McDevitt said.

While there she met with Montana’s three elected representatives and their staffs in Congress. She said they told her they believe climate change is happening and humans play a role. But the politicians also talked about “clean coal,” an idea she dismisses. “It’s an oxymoron,” she said. There’s no such thing.”

McDevitt said that Hayhoe has pointed out all the good things that fossil fuels have done for humanity — making possible the end of slavery and empowerment of women, taking over doing our laundry, cooking our food, lighting our homes, entertaining us and advancing technology.

“All the progress that allowed human society to thrive — we owe a lot to fossil fuels,” McDevitt said. “But now we have to leave it in the ground.”

There is greater skepticism of climate change at many more conservative churches.

A quarter of Americans identify as evangelicals and a strong majority rejects the idea that climate change is caused by humans, Hayhoe said.

The No. 1 predictor of whether Americans believe that the climate is changing in dangerous ways because of human activity is where people stand politically.

The Evangelical Declaration on Global Warming, published by a group called the Cornwall Alliance in 2009, declared, “There is no convincing scientific evidence that human contribution to greenhouse gases is causing dangerous global warming.”

It said government policies to “fight alleged man-made” warming would “destroy jobs and impose trillions of dollars in costs” and mean a “dangerous expansion of government control over private life.”

The Earth and systems created by God are self-correcting and recent warming is just “one of many natural cycles,” it said. The group rejected the idea the Earth is fragile and vulnerable to “miniscule changes in atmospheric chemistry.” It called fossil and nuclear fuels indispensable.

“I think it’s fairly safe to say our consensus is global warming is real. I don’t think there’s much doubt about that,” Hughes said. “The difficulty is getting good science on it.”

Some warming is due to natural causes, like volcanoes and ocean currents, he said, and some is caused by humans.

“The biggest issue for us is I’m not sure we always get good science.” Hughes said.

She argues that polar bears, the icon of global warming, rather than facing extinction as sea ice melts as scientists predicted, are actually be increasing in population because their prey, seal pups, fares better in longer summers.

“It’s showing a lot of these doomsday prophecies are not good science,” Hughes said.

Nearby at the Evangelical Free Church, Pastor Jim Keena has a different approach.

“I do believe in climate change,” Keena said. “There is something going on. You can’t dump as much carbon dioxide in the atmosphere and not expect some changes. I think the scientific evidence is clear.”

A university student from South Africa who lived with Keena's family talked about how brutal the drought was back home, he said.

God wants us to take the things he created “and use them for the betterment of creation as a whole and people as a whole,” Keena said. “The relevance for climate change is we’re to be better stewards of creation.”

It’s important as Christians to care about climate change because it affects people, especially those living in poverty, in developing countries and in places where sea levels are rising, Keena said. And it will affect the next generation.

“I think we’re doing such damage to the climate,” he said. “We need to think about future generations.

“In the beginning God created heaven and Earth,” he added. “We should take care of creation because it is not ours -- it is God’s.”

Expansion of development off Huffine, College to include residential units