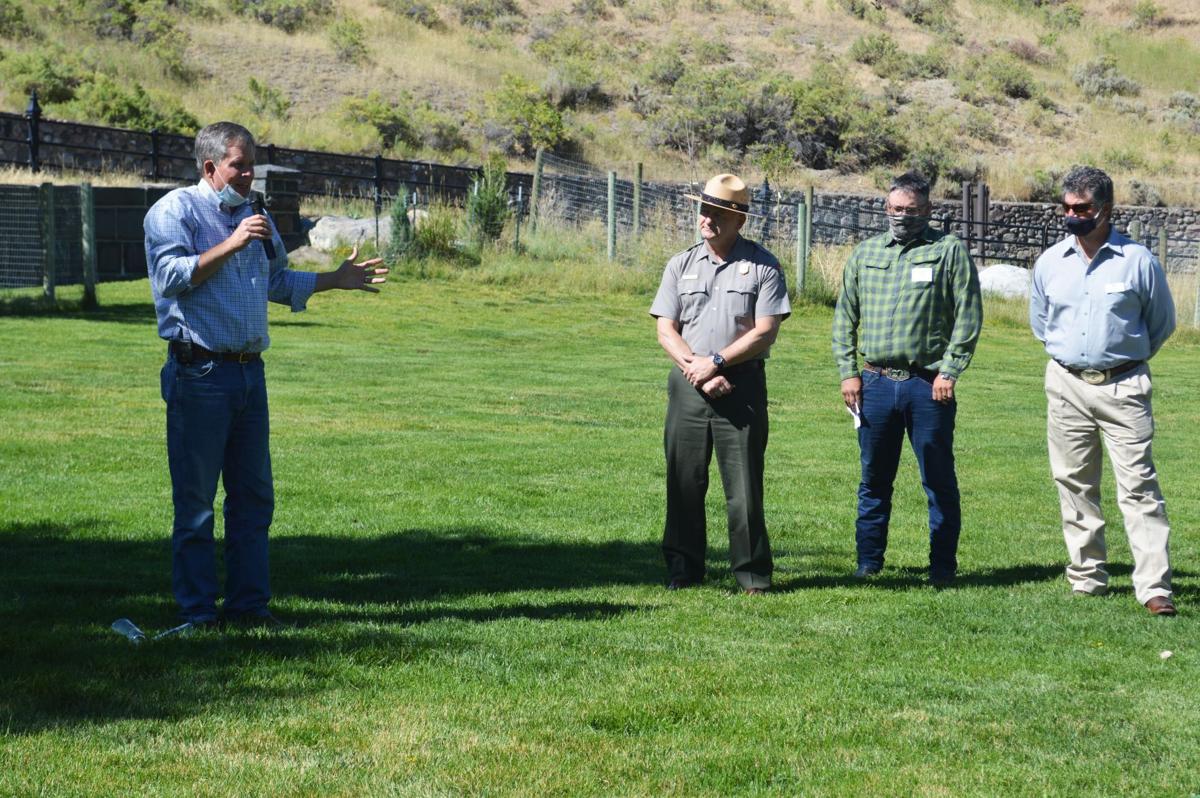 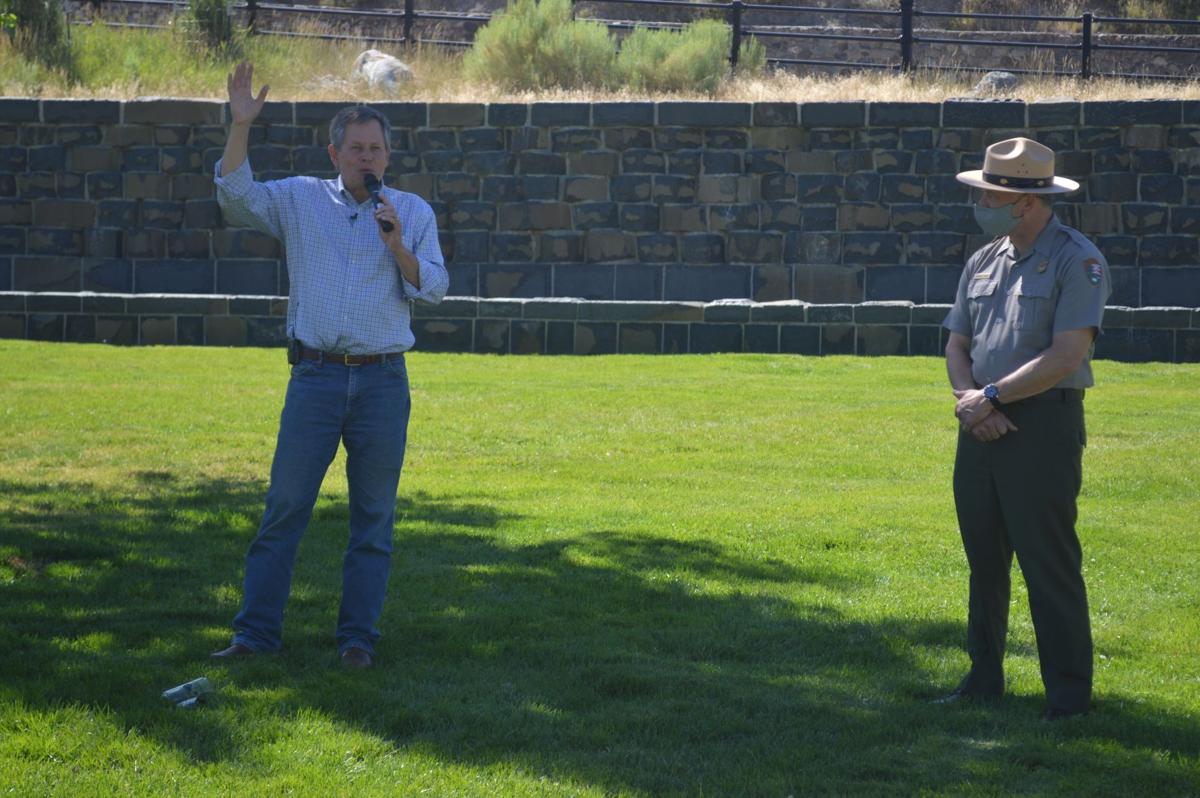 Earlier this summer, the U.S. House and Senate passed the Great American Outdoors Act, which provides $9.5 billion for the maintenance backlog on public lands and sets aside $900 million annually for the Land and Water Conservation Fund.

Last week, President Donald Trump signed the bill into law at the White House, despite including funding cuts to LWCF in past budget proposals to Congress.

Daines, a Republican who is up for reelection, spoke briefly at Tuesday’s event, acknowledging conservation groups for their years of work on the Great American Outdoors Act.

“I want to thank the folks who are here today because the support we had from outside of Washington, D.C., putting pressure on Washington, D.C., to get this done cannot be overstated,” he said. “It made all the difference because it’s not always easy to get something that seems like relatively good, common sense done.”

Daines also highlighted a February meeting with Trump in which the president promised to sign the bill if it reached his desk.

Yellowstone National Park Superintendent Cam Sholly thanked Daines for championing a bill that will help address the park’s maintenance and infrastructure backlog by using revenue from oil and gas production on federal lands.

“We’ve done a very good job here and in many places across this country in improving the condition, especially from a conservation and preservation standpoint, of our U.S. national parks,” Sholly said. “What we haven’t done the greatest is take care of the infrastructure in these parks.”

Brian Yablonski, the CEO of the Property and Environment Research Center, said his organization testified multiple times before Congress about the importance of tackling projects in national parks like repairing wastewater systems, rebuilding bridges and replacing boardwalks.

“The inscription on the arch that Theodore Roosevelt laid the cornerstone for in 1903 says, ‘for the benefit and the enjoyment of the people,” Yablonski said referring to the stone arch that marks the north entrance to Yellowstone. “But it’s hard to deliver on that when you don’t do the basic upkeep of your land.”

The Trust for Public Lands also touted the importance of LWCF. The $900 million now guaranteed annually for the program will provide much-needed certainty as the nonprofit acquires lands for conservation and works with landowners on conservation easements, said the group’s Northern Rockies director Dick Dolan.

“There has been bipartisan support for LWCF for 40 years, but for whatever reason, this hurdle, we couldn’t get over it,” he said. “So I salute you for seizing the moment, for seeing the moment, first of all, as the opportunity it was to bring Congress together on both sides of the aisle to actually get this done.”

Several conservation groups and the Montana Democratic Party have condemned Daines’ work on the Great American Outdoors Act, calling it a blatant attempt to win reelection in November. In response, Daines has called the criticism “sour grapes politics.”

Kayje Booker, the policy and advocacy director for the Wild Montana Action Fund released a statement on Tuesday, saying Daines’ support of the bill is “a rare blip” in his “abysmal public lands record.”

The Montana Democratic Party released a statement criticizing several of Daines’ actions, including “backtracking” on his support for William Perry Pendley, the acting director of the Bureau of Land Management.

Daines previously has expressed some support for Pendley, but on Tuesday, he said he has “serious concerns” about Pendley, particularly related to his views on stream access and the sale of federal lands to private groups. He said if the Senate Energy and Natural Resources Committee, which he sits on, has a hearing on Pendley’s nomination, he would have “very strong and direct questions.”

Last week, the Trump administration sent the committee the final paperwork it needed before it could hold a hearing. The committee has yet to schedule a hearing.

Montana Conservation Voters, which has been pressuring Daines to speak out against Pendley, also drew a connection between the Great American Outdoors Act and the BLM’s acting director.

“The Great American Outdoors Act is a historic victory for conservation, but funding our public lands is meaningless if our public lands are sold off,” said deputy director Whitney Tawney in a statement. “Montanans can’t trust Senator Daines to support public lands because his walk is not matching his talk.”

Daines’ opponent in the Senate race, Democratic Gov. Steve Bullock, has used Pendley’s nomination to highlight his own conservation work. He also has filed a lawsuit arguing it is illegal for Pendley to continue serving as acting director of the BLM while his confirmation for director is pending before the Senate.

Montana Sen. Jon Tester, a long-time advocate of LWCF, sent a letter on Tuesday to Secretary of the Interior David Bernhardt and Secretary of Agriculture Sonny Perdue requesting they quickly use the newly available funding from the Great American Outdoors Act.

Rep. Greg Gianforte, a Republican running for governor, voted for the Great American Outdoors Act but declined to sponsor it over concerns that amendments he disagreed with would be added during House deliberations.