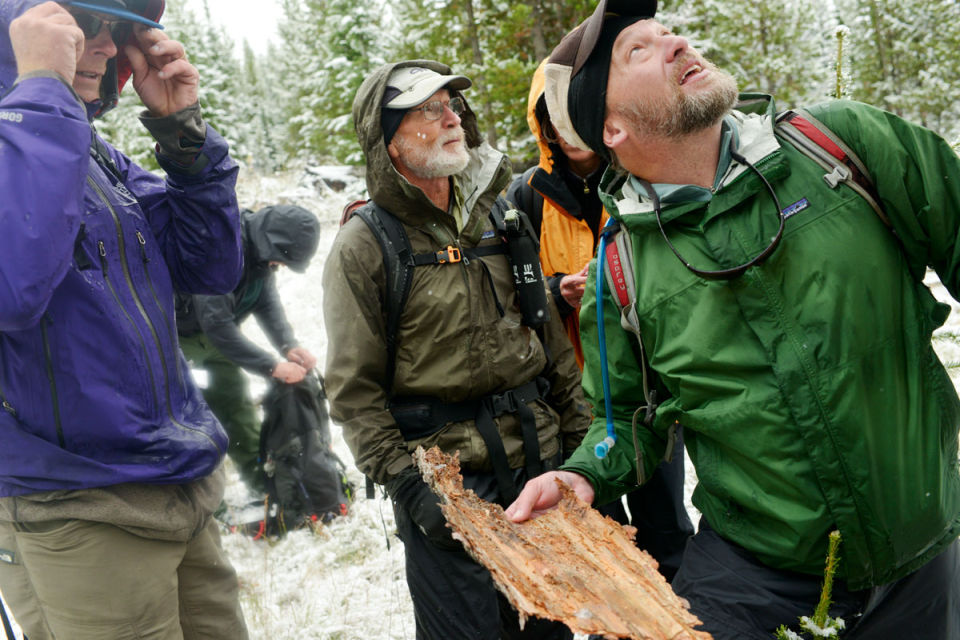 Research associate Wally Macfarlane and beetle expert Jesse Logan, center, study the canopy of a dying whitebark pine tree during their Wednesday hike. Since 2009, the majority of the whitebark pine stands in the greater Yellowstone ecosystem have died. 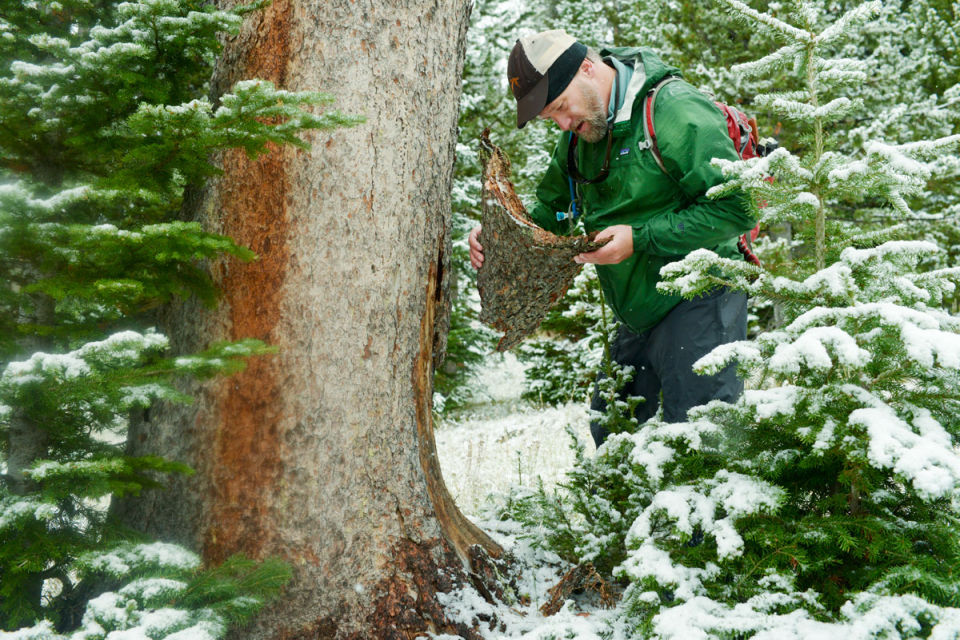 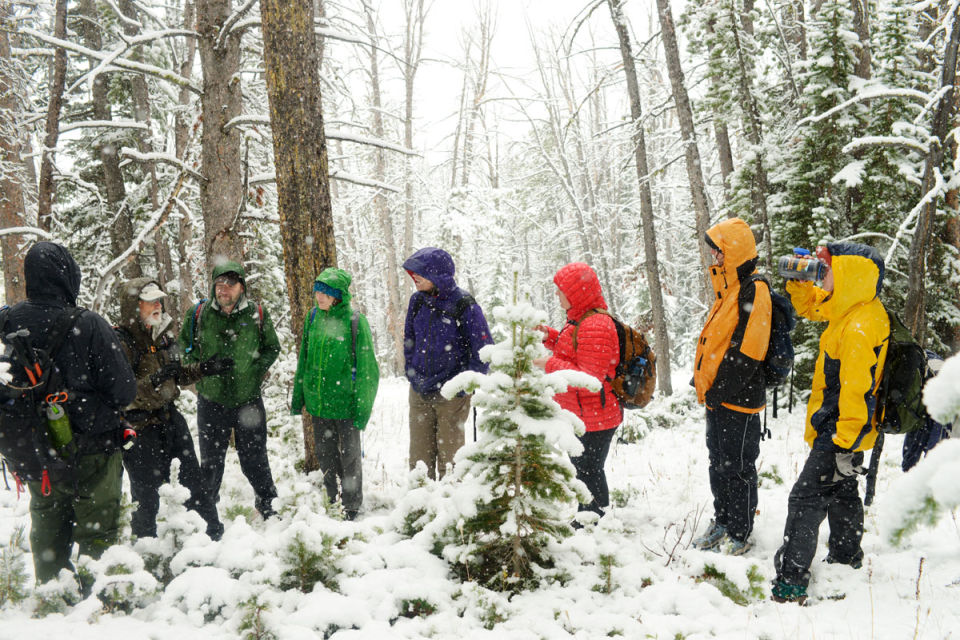 Research associate Wally Macfarlane and beetle expert Jesse Logan, center, study the canopy of a dying whitebark pine tree during their Wednesday hike. Since 2009, the majority of the whitebark pine stands in the greater Yellowstone ecosystem have died.

EMIGRANT - On Wednesday, Wally Macfarlane picked his way up the slick scree slope to the highest point of Packsaddle Peak. There, buffeted by the winds that pushed the first snow of September through the Tom Miner Basin, the big man carefully turned 360 degrees, taking overlapping photos of the surrounding forest.

“This is a very different forest. It's really depressing, Jesse,” Macfarlane said as his lithe partner caught up to him on the 9,600-foot-high point.

Entomologist Jesse Logan looked around, sizing up the forest patch that he'd last seen in 2009. It was now mostly a cemetery with gray, twisted trees as its headstones – the standing dead.

The only green branches he saw were on isolated lodgepole pines and a few whitebark pine holdouts, usually small, young trees. But even they tended to display the telltale red needles, evidence that pine beetles were probably killing them.

“I'd say it's around 80 percent gone,” Logan said. “This is happening faster than the models predicted.”

Logan and Macfarlane, a Utah State University research associate, have been working together since 2005, tracking the health of whitebark pine forests in the greater Yellowstone ecosystem.

When they started, it was already too late for several whitebark stands.

Since then, it's been like monitoring the health of a family member with a progressive terminal disease. Each time they visit a stand, conditions have worsened because of a warming climate.

“These are not happy times for the species. We never come up and find them in better shape,” Logan said. “But it's exciting for an ecologist because everything is accelerated. Decades of change are compressed into years.”

Logan is no starry-eyed, young scientist.

At 69, he's lived in different parts of the U.S. and adjusted to the regimens of nonprofits, universities and federal agencies. He's seen how politics at any level can hinder the search for knowledge.

Finally, when the Bush administration wouldn't allow federal employees to even say the words “climate change,” he gave up a Forest Service job he enjoyed.

“He got fed up so he retired early,” Macfarlane said.

Though hardened slightly by his experiences, Logan can still get emotional about whitebark pine, especially when he thinks that his grandchildren might never see one.

Up until a few decades ago, whitebark pine trees persisted because they evolved traits that let them survive harsh conditions at high-elevations. There, they couldn't grow very fast, but they could escape most of the threats of herbivores and disease.

The trees can live for centuries – one was estimated at around 1,300 years old.

They need to live long because they don't start producing cones until they're around 50 years old. That could stall population growth if only young trees are surviving.

Whitebark pine is a keystone species, meaning other species depend on them for survival, directly or indirectly.

Birds, squirrels and grizzly bears depend on whitebark pine nuts for food. In turn, the trees depend on the animals to pry open their tough cones and spill enough of the nuts for new trees to start.

The picky habits of the Clark's Nutcracker make it ideal for winging nuts into new habitat. The bird caches the nuts for winter, so it often choses cache sites on high windy outcroppings where the snow doesn't pile as deep. The nuts don't yield successful trees if the site is too high and cold.

With climate change, that's becoming less of an issue.

The attributes that got the whitebark pine this far may doom it to succumb more rapidly to climate change than other species.

Its demise should be a warning, Logan said.

The biggest problem is that winter temperatures no longer get cold enough to kill off pine beetles. The effect is worse at lower elevations.

Unlike other pines, whitebark pine never developed much of a chemical defense against beetles. Producing such chemicals would take energy that the tree needs just to survive.

In college, Logan was taught that pine beetles had a one-year life cycle, which could take two years at high altitude. Beetles spend most of that beneath the bark, and adults emerged once a year to fly to other trees.

Now, summers start earlier and last longer, and scientists have found locations where beetles have enough time to produce two flights of adults per year.

That has caused whitebark pine stands to collapse within three years, Logan said.

To knock a beetle population back, temperatures need to be very cold for an extended time during winter, or a deep cold snap needs to come early enough in the fall to zap beetles before they settle in.

Neither happens much anymore except at the highest elevations in places like the Beartooth Mountains or the Wind River Mountains in Wyoming, the last bastions of the whitebark pine in the greater Yellowstone ecosystem.

“The inhospitable is becoming hospitable,” Macfarlane said. “The future of whitebark is moving up, but they're in the highest forest right now. There's not a lot of room left above.”

Logan has watched pine beetles march farther north and higher up since the 1990s, but he started focusing on the greater Yellowstone ecosystem in 2005.

Using computer models, Logan predicted how beetles might reduce whitebark pine in the ecosystem. Then he and Macfarlane ventured out to see what was really happening.

After 10 days of backpacking in the Wind River Range, they were disturbed by the results.

“We were projecting that losses would occur 20 years in the future, but it was already happening,” Macfarlane said.

They realized they needed to use aerial-photo surveys if they wanted to verify if the same was happening across the entire 22 million-acre ecosystem.

Rather than recording just the red trees that died that year as the Forest Service did, Macfarlane came up with a classification system using the ratio of live green trees to dead red and gray trees in each stand. Macfarlane said it gave a better idea of the cumulative effect of beetles at any one time.

Macfarlane's system indicated the whitebark pine stands were in worse shape than the Forest Service thought. Stands in 16 of the 22 major mountain ranges within the GYE are nearly gone.

“I was getting threatening phone calls because they were getting ready to delist the grizzly bear. But we were showing the collapse of an ecosystem,” Macfarlane said. “We found 95 percent of the stands had some impact in 2009.”

Some agencies, including Montana Fish, Wildlife & Parks, say that grizzly bears can shift to something else if pine nuts disappear. But native trout populations are also threatened by warming water caused by climate change, and berries can have bad years.

Macfarlane said that because the whitebark pine cones are ready starting in late August, they provide a high-fat resource just as bears, particularly pregnant females, are preparing to hibernate.

Logan said the grizzly discussion gets contentious, but his passion is the tree itself.

He pulled a section of bark off a recently deceased whitebark pine, an action Macfarlane dubbed “opening the book.” Along the inside of the bark, the story of the tree's death was written in the shallow squiggles of beetle-larva chambers.

“There was an outbreak in the 1930s and some say this is no worse,” Logan said. “But the 1930s outbreak ended and didn't produce the number of dead trees we see today. This one isn't over – it's continuing. It's a manifestation of climate change.”

Many people don't know whitebark pines are in decline because few venture high enough to see them. Perhaps if they saw the forests becoming grim, gray ghosts, they'd be more alarmed, Macfarlane said.

“That's why we're up here documenting this,” Macfarlane said. “Otherwise, maybe no one would know what happened.”