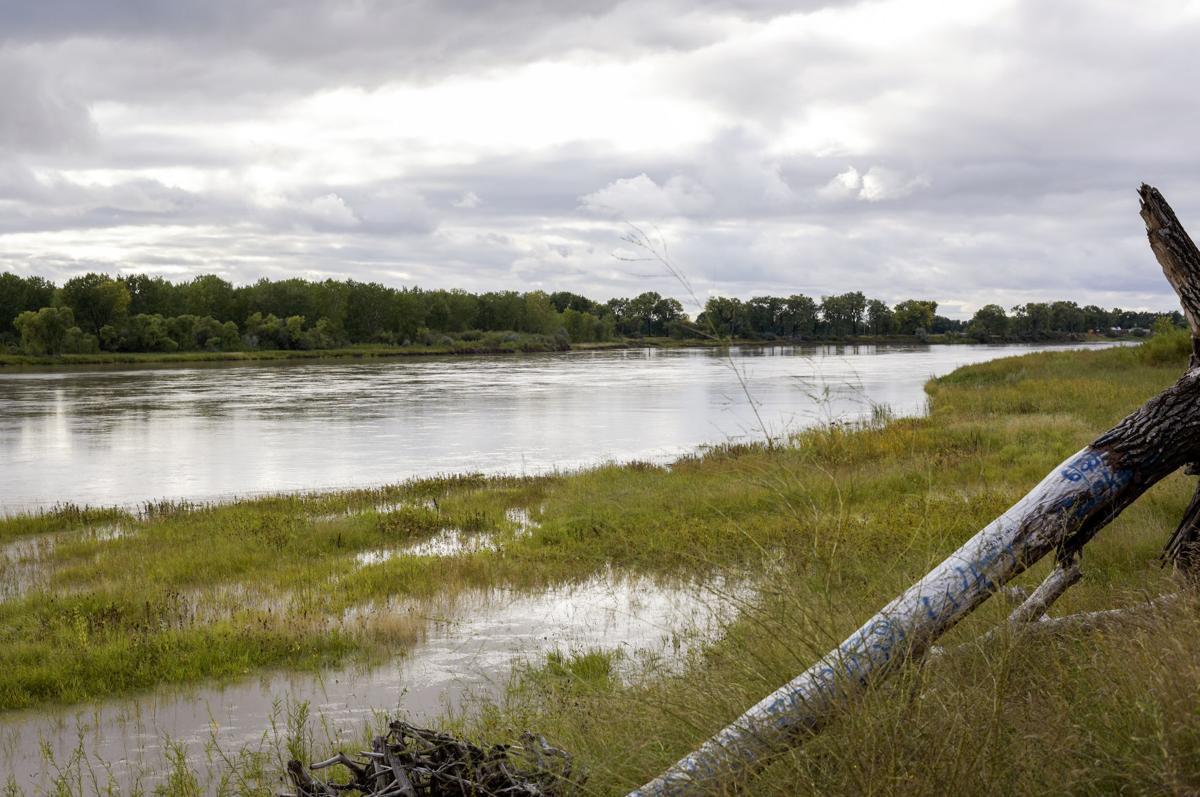 The Missouri River drifts past the Fort Peck Reservation on September 11, 2019. 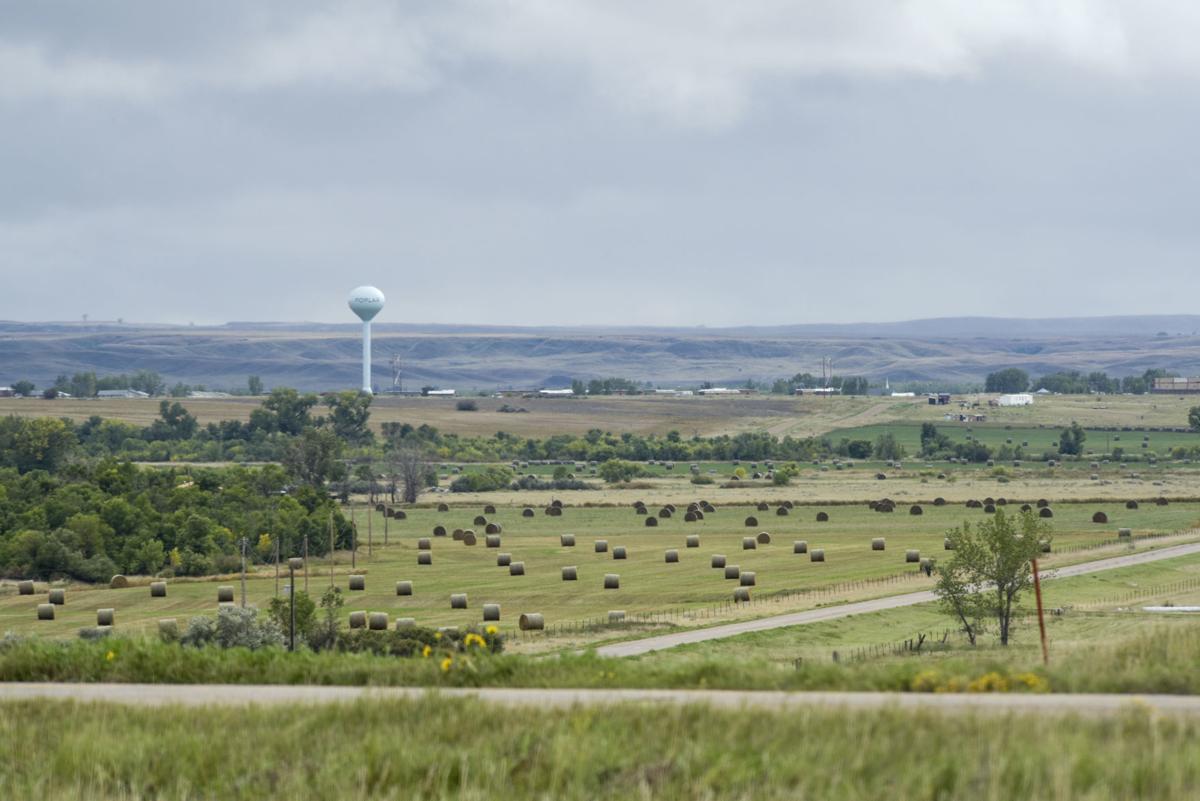 Fields surround the city of Poplar on September 11, 2019. 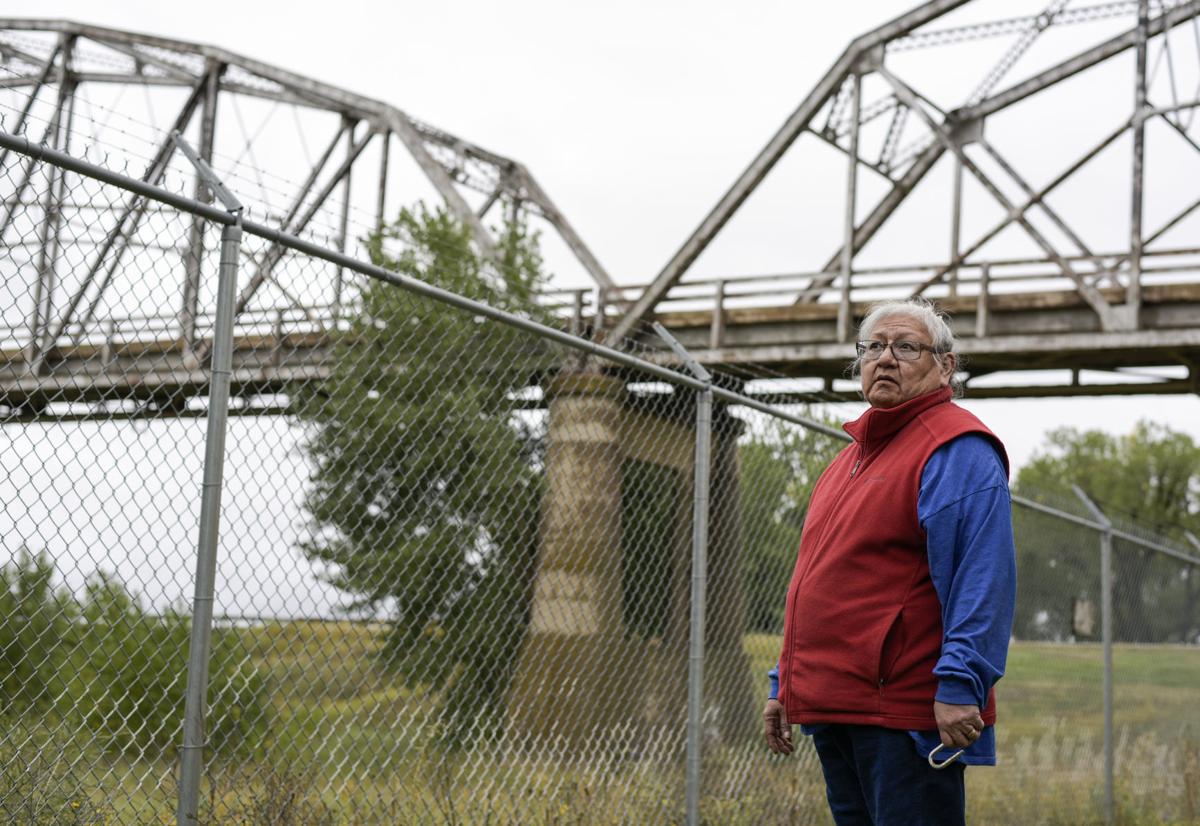 Plant Supervisor Sandra White Eagle gives a tour of the intake for the Assiniboine and Sioux Rural Water Supply System on September 11, 2019, on the Missouri River. 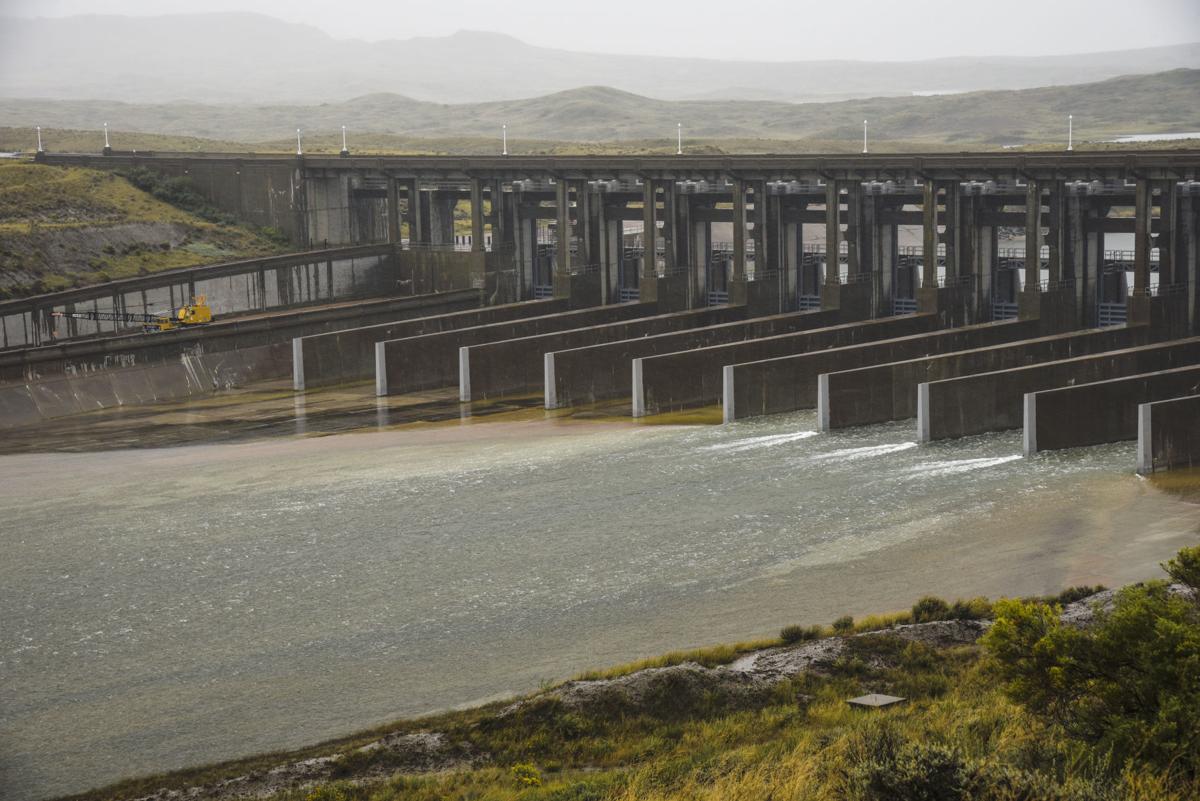 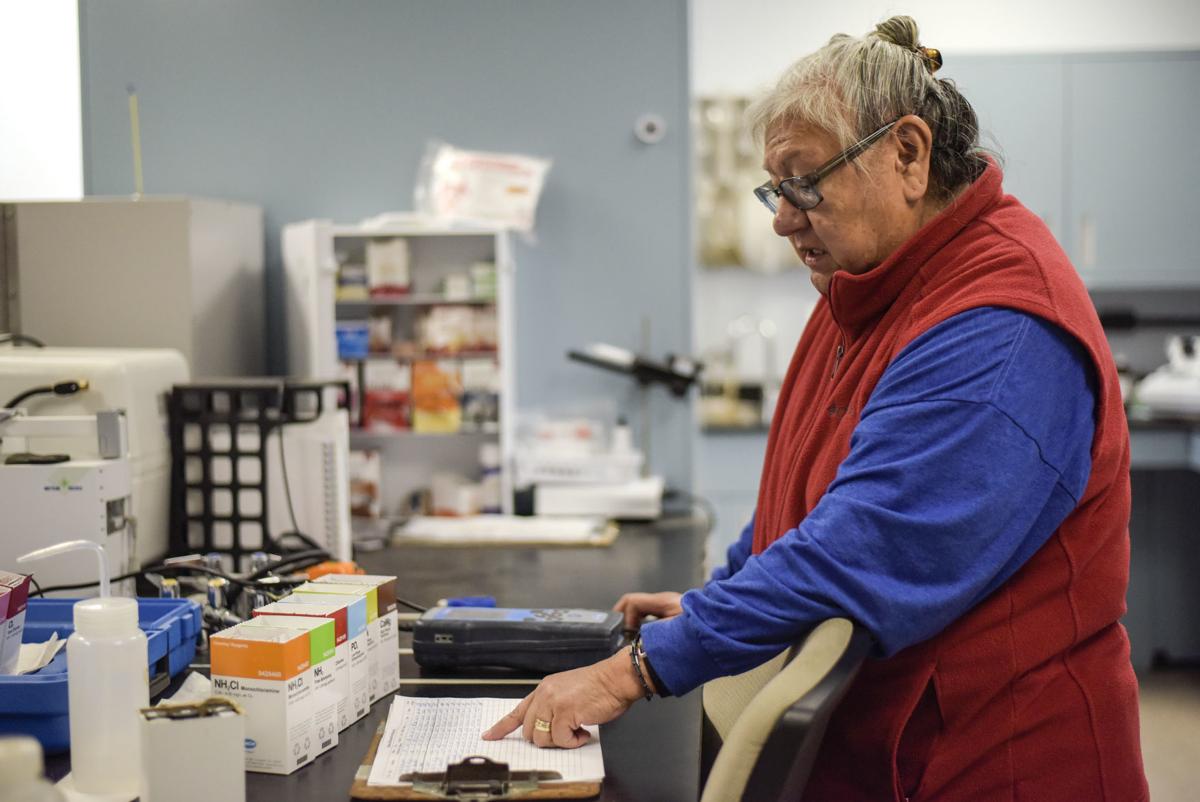 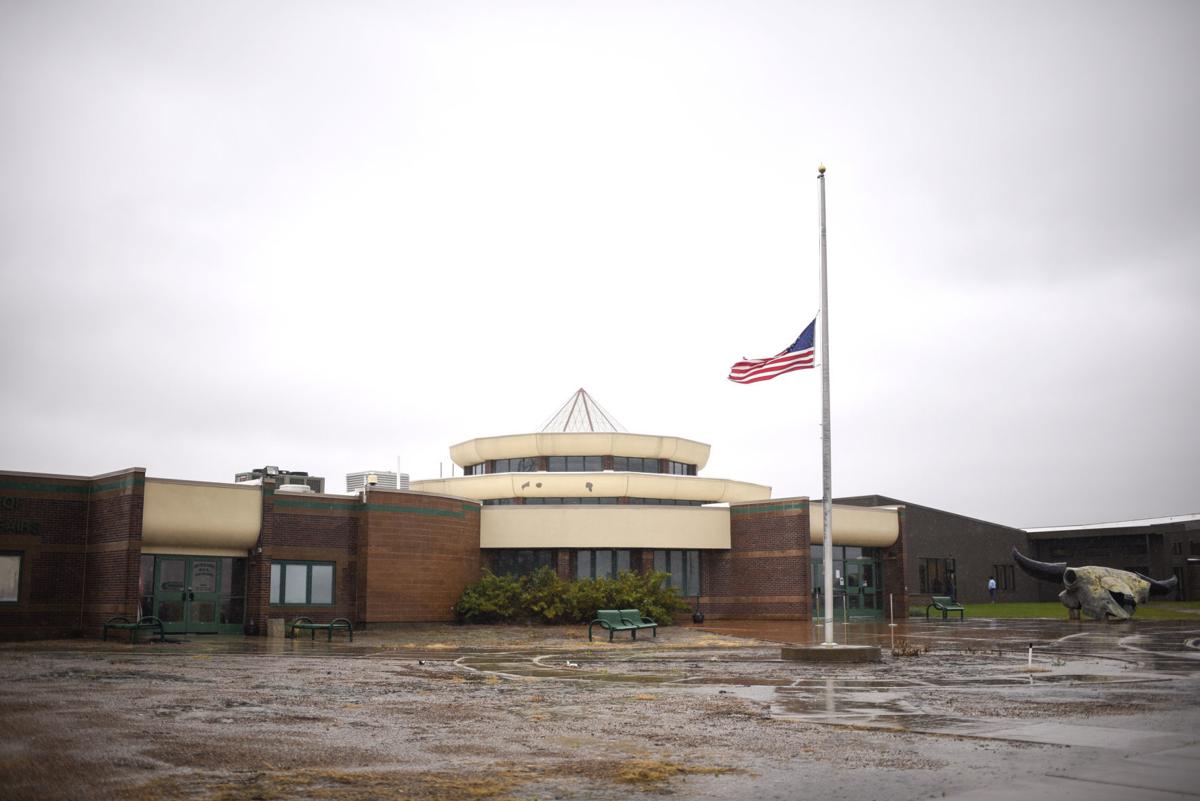 Rain falls on the Fort Peck tribal building on September 11, 2019, in Poplar. 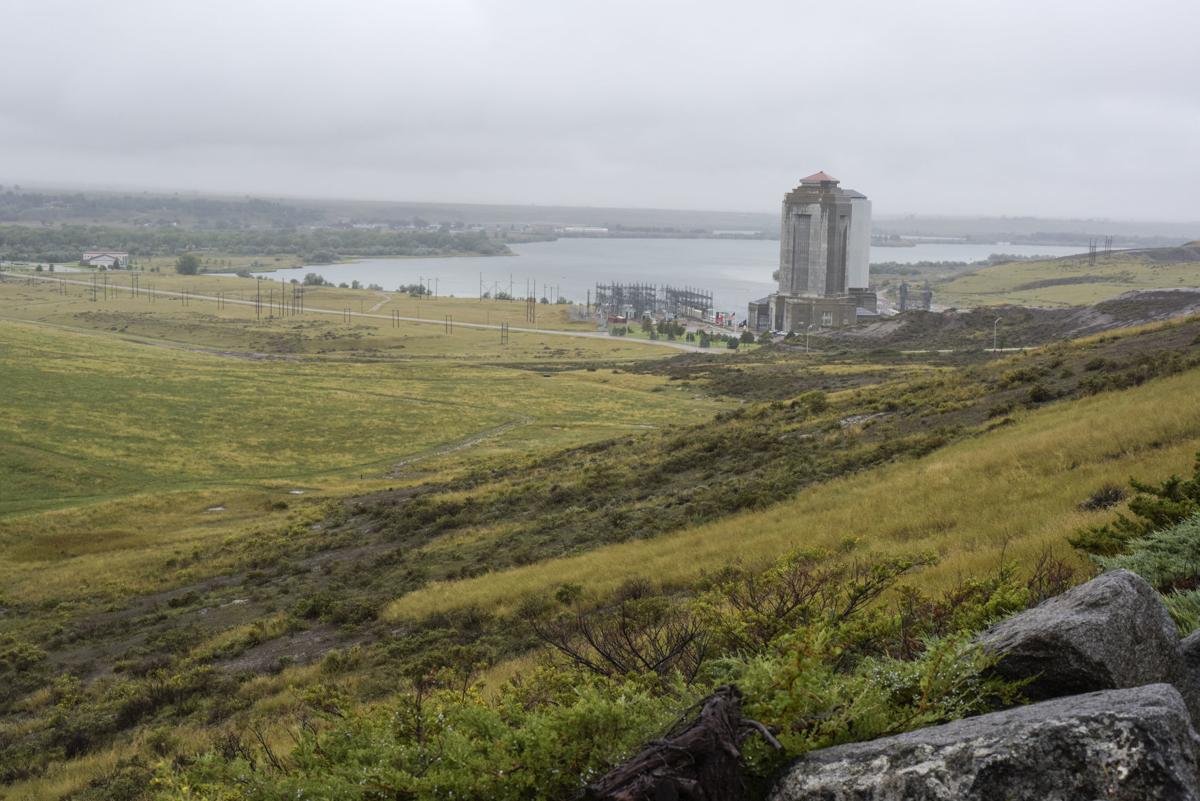 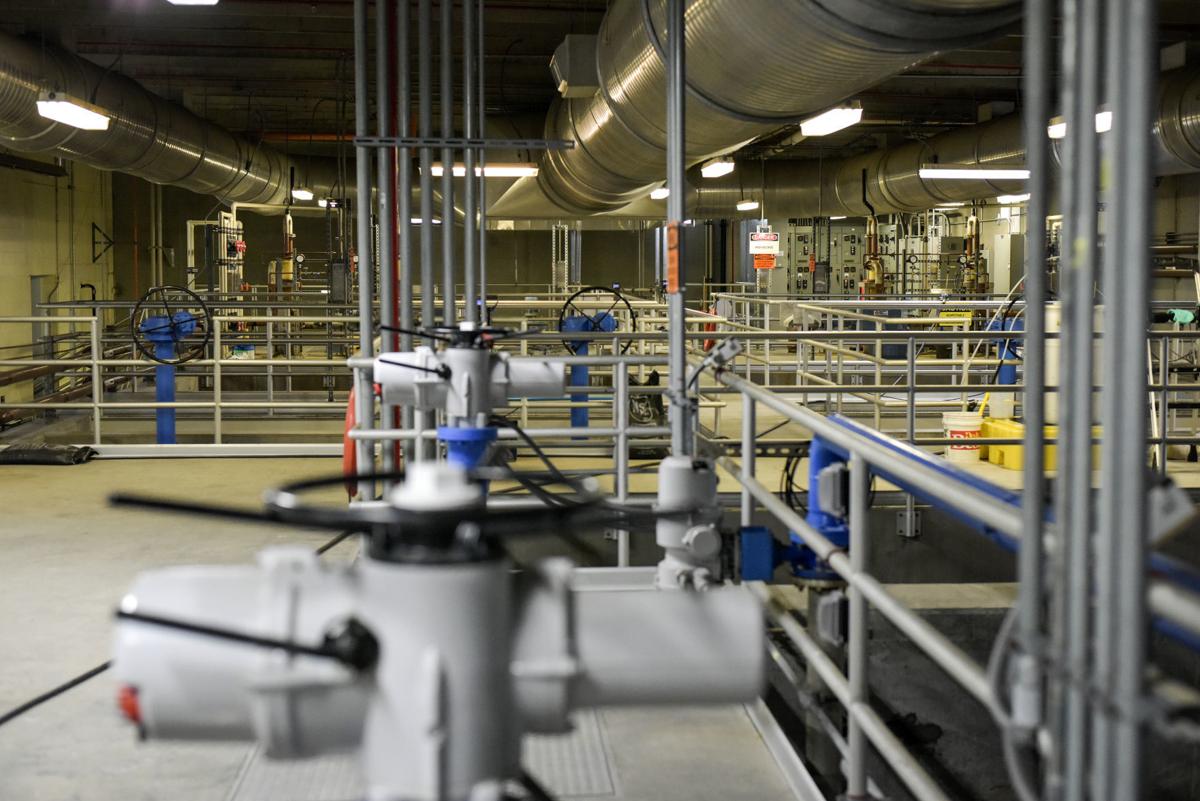 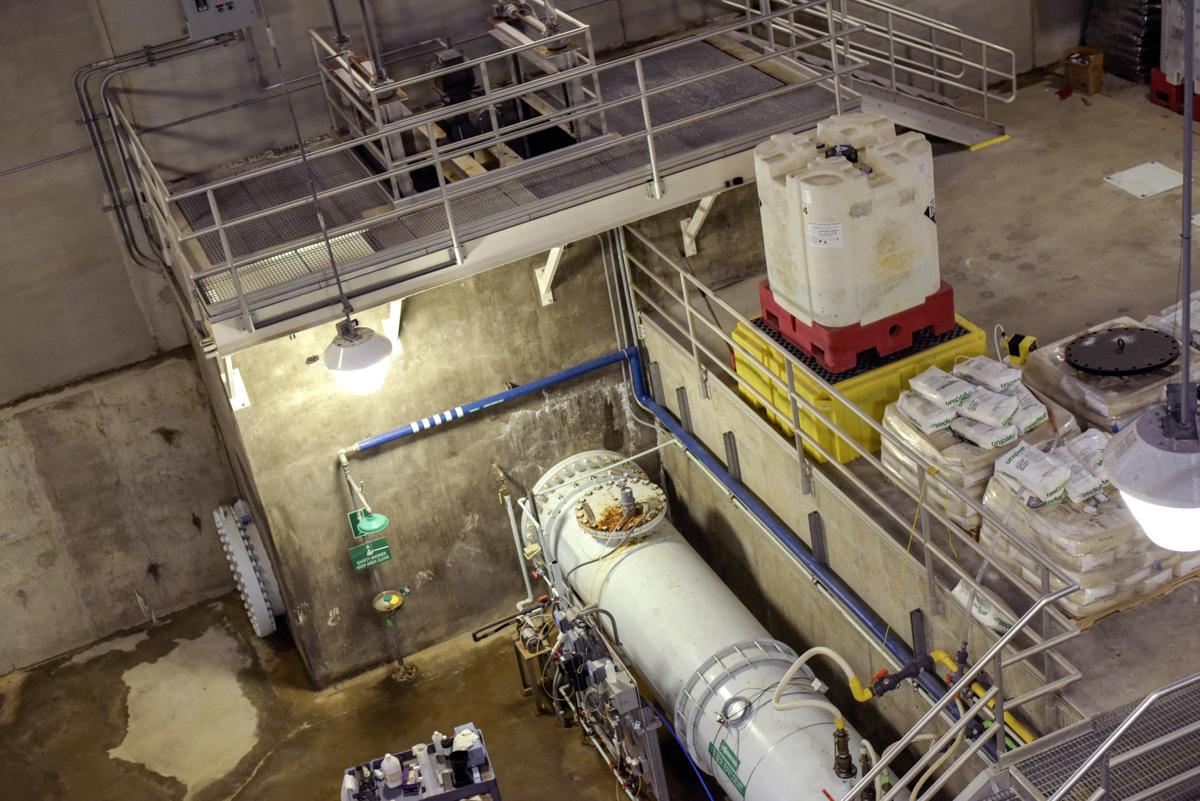 Fields surround the city of Poplar on September 11, 2019.

Plant Supervisor Sandra White Eagle gives a tour of the intake for the Assiniboine and Sioux Rural Water Supply System on September 11, 2019, on the Missouri River.

Rain falls on the Fort Peck tribal building on September 11, 2019, in Poplar.

From the Fort Peck Dam downstream, the river snakes along, defining the Fort Peck Indian Reservation’s southern border. People across northeastern Montana rely on it. It’s their lifeline.

The reservation’s 6,800 people are scattered across more than 2 million acres of land in the northeast corner of Montana. The reservation is dominated by agriculture. There are 11 irrigation districts and many individual irrigators who draw water from the river for their crops.

The river feeds into the Assiniboine and Sioux Rural Water Supply System, which supplies water for people both on and off the reservation. It cleans an average of 2.5 million to 5 million gallons of water a day, depending on demand. The plant distributes the water to about 20,000 people on the reservation and in Glasgow, Scobey, Plentywood and Culbertson.

That’s why some people here don’t trust a Canadian oil company’s proposal to dig a hole under the Missouri River for a pipeline to send up to 830,000 barrels of crude oil a day from Canada to the Gulf Coast.

TC Energy Corporation, formerly known as TransCanada, plans to drill 25 feet below the river to install the pipe, also known as the Keystone XL Pipeline. In a video on the company’s website, a calm-voiced narrator says it will use a drilling technique that allows minimal impact on the environment.

TC Energy did not respond to requests for comment for this story.

The company’s website says the energy company will work with local emergency responders to develop a response plan in case of a rupture. It says a command center will also monitor the flow of the pipe and could shut it off if something goes wrong.

Earlier this year, President Donald Trump issued a permit to start construction on the pipeline.

The U.S. Army Corps of Engineers is charged with evaluating and issuing permits for all water crossings. The corps did not respond to requests for comment for this story.

Montana U.S. Sen. Steve Daines and Attorney General Tim Fox and several other politicians have come forward in support of the pipeline, saying that it would boost the state’s economy.

But leaders on the Fort Peck Reservation don’t buy it. Like Sen. Frank Smith, D-Poplar, who’s concerned a about the threat it could pose to the river.

With a history of groundwater contamination on the reservation from past oil practices, tribal leaders said, the pipeline’s placement threatens the last two sources of clean drinking water — the Missouri and Milk rivers. They want a plan from the energy company for how it would clean the water if the pipe leaked. They say they have received no reply.

In April, the Indigenous Environmental Network and North Coast Rivers Alliance sued the federal government, alleging construction of the pipeline would pose grave risks to the environment. The lawsuit said the pipeline would threaten the climate, cultural resources, water, fish and wildlife, and human health and safety.

The lawsuit asks a federal judge to overrule Trump’s permit to allow the energy company to build 875 miles of the line, which would run through Montana, South Dakota and Nebraska.

The Trump administration has asked that the lawsuit be thrown out of court because “the president’s authority to issue a border-crossing permit is well-established.” It argues that the permit applies only to the “facilities at the international border” and does not eliminate federal or state restrictions for the project’s remaining 875 miles. The administration also said that the plaintiff’s complaints aren’t ripe because “none of the agency defendants have yet taken actions that plaintiffs claim would actually injure them.”

Since it was filed, attorneys from both sides have submitted numerous requests and TC Energy has intervened on behalf of the defendants. Among those include a request to prohibit further action on the development until the issue is resolved.

The case is pending and a judge has not ruled on that request.

Among the documents filed by plaintiffs was a declaration from Bill Whitehead, chair of the reservation’s water plant. In his statement, Whitehead included several reasons why putting the oil pipeline under the river is a bad idea.

Whitehead said the reservation’s water treatment plant is not designed to remove the contaminants that would be moving through the pipe. If the pipe were to leak, he said, the oil would force the water plant to close, cutting off drinking water to four hospitals and 13 schools.

The proposed pipeline would be just a few hundred yards downstream of the Fort Peck Reservoir Spillway. During high water conditions, Whitehead said, hydraulic force of released water can erode the Missouri River’s riverbed. The worry is that those forces increase the danger of damaging the pipe.

“The proposed placement of the Keystone XL Pipeline at this location would subject the pipeline itself to highly erosive forces,” he said.

The Missouri River freezes over during winter months. Whitehead said if a spill happens during that time it would be hard to pinpoint the location of it and potentially impossible to access and repair it.

The reservation has a long history of groundwater contamination issues because of past oil exploration practices, said Deb Madison who worked for the reservation’s Office of Environmental Protection.

Madison, who is now the reservation’s minerals and tax administration manager, said a tribal member came into the environmental protection office in 1987 with a sample of water that was salty. Preliminary tests later showed that the water had elevated levels of contamination but didn’t specify what was in the water.

The office inspected the person’s well and found that the water was foamy and warm, which was unusual.

“We did a thorough investigation and determined that we had an active (brine) plume in the south side of the reservation,” Madison said. Brine is a byproduct of oil and gas production.

Studies by the U.S. Geological Survey estimate that 15 to 37 billion gallons of groundwater were contaminated by oil exploration on the Fort Peck Reservation beginning in the 1950s. The survey found that contamination affected the water from privately owned wells in and near the East Poplar oil field and Poplar’s public water-supply wells.

In 1992, the tribes started work on a water supply system for the southern half of the reservation to address the contamination. Two years later the system was redesigned to include the entire reservation and ways to save money on construction costs.

When the plan was presented to Montana’s U.S. Sen. Conrad Burns in 1994, Burns suggested that it be used as a regional water system because areas off the reservation were experiencing similar water contamination.

Madison said the brine plume is part of the reason the reservation was able to get federal money to build the water treatment plant. After that, though, they still wanted more from the companies. In 2012, the EPA reached an agreement with oil companies Murphy Exploration and Production Co., Pioneer Natural Resources USA, Inc. and SGH Enterprises, Inc., to monitor the city of Poplar’s water supply monthly, the 2012 EPA news release said.

Madison sees the proposed pipeline as the renewal of an old threat. She called the proposed route an “environmental injustice” and a decision based in politics. She’s afraid that if the economy dips and oil prices go south, oversight of the pipe will fall off and the potential for a problem would increase.

“You could have rules and regulations, but when things get tight people start cutting corners,” Madison said. “Then you have things that happen that shouldn’t happen.”

White Eagle said if oil got into the treatment plant it would likely shut it down.

“It would be devastating,” she said. “As soon as it got into our intake it’s in there — it would get brought into the treatment process.”

Households that connected into the new system would be on the hook for finding their own clean water. White Eagle said that would likely mean going back to their old groundwater wells.

“Before they could use it, they have to disinfect their well,” She said. “It doesn’t sound like much, but it’s expensive.”

As the chairman of the tribes, the issue weighs heavy on Floyd Azure. He’s anticipating a spill and needs to know how it will affect the reservation’s ecosystem and the area’s water supply.

Azure said the pipeline crosses the Milk and Missouri rivers — the last two sources of fresh water for the reservation. He asked three years ago for a clean up plan if a spill happened and is still waiting to hear back from the company.

Azure said tribal officials were put on the back burner when it came to planning the pipe’s location. The tribes’ legislators and officials pushed the company and two meetings eventually happened in Miles City, but Azure said it was a waste of his time because their concerns were not addressed.

“They don’t care about us. Period. They have done nothing to reach out to us,” he said.

Azure said he’s lost trust in the oil company because, for them, it’s about the “almighty dollar.” Despite the tribes’ concerns, he said, the company isn’t willing to change their project.

If a rupture happens, Azure said, he’s not sure how the reservation would get clean drinking water.

“I got enough problems with what’s happening on my reservation right now: poverty, drugs, drinking and all that. That’s what’s happening on the day-to-day,” Azure said. “I do not need another problem on my shoulders, where I have to worry about whether the pipeline is going to break or not.”