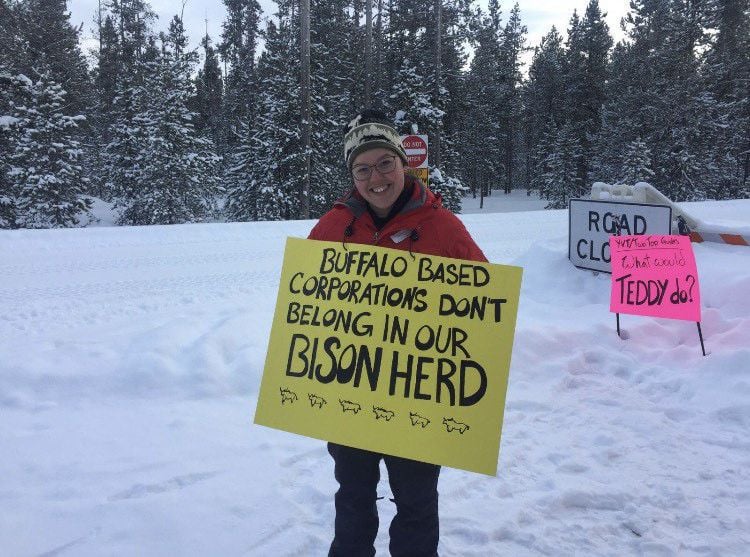 Sophie Krautmann poses with a photo on a picket line near the West entrance of Yellowstone National Park on President's Day, Feb. 17, 2020. Delaware North is a Buffalo, New York-based company that owns two oversnow guide companies and hotels in West Yellowstone. 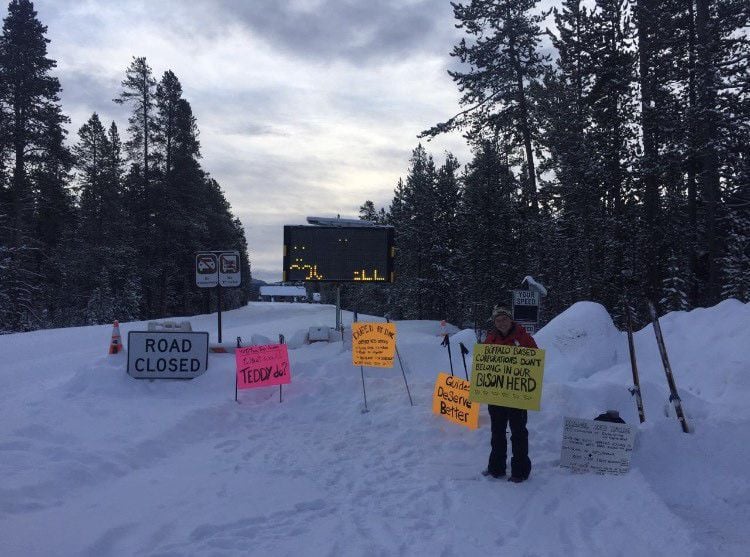 Sophie Krautmann poses with a picket sign near the West entrance of Yellowstone National Park on President's Day, Feb. 17, 2020.

Sophie Krautmann poses with a photo on a picket line near the West entrance of Yellowstone National Park on President's Day, Feb. 17, 2020. Delaware North is a Buffalo, New York-based company that owns two oversnow guide companies and hotels in West Yellowstone.

Sophie Krautmann poses with a picket sign near the West entrance of Yellowstone National Park on President's Day, Feb. 17, 2020.

Guides Sophie Krautmann and Ty Wheeler stood at the entrance of the park while snowcoaches and snowmobiles entered the park between 8 and 10 a.m., when a majority of the traffic was going into the park.

Wheeler, a U.S. Air Force veteran, has been working as a guide in various capacities for nearly 22 years. He was fired from his guide job at Two Top, which Delaware North bought in 2019, on Sunday.

Wheeler said he was let go after years of guiding in the park because he was heading an effort to unionize guides for better working conditions.

”They hired double the number of guides to come in,” said Wheeler. “We have one really busy week and they hired so they didn’t have to pay any overtime during that week ... during the rest of the year, we only had two days per week, three days per week.”

Delaware North’s corporate office did not respond to requests for comment by deadline. The company, which operates in national parks across the country, runs 12 general stores in Yellowstone and runs several hotels here.

The west entrance of Yellowstone is open only to oversnow traffic during the winter, and those vehicles need a permit to enter.

There are six commercial tour companies that give tours with oversnow permits out of West Yellowstone. Delaware North operates two — Yellowstone Vacations and Two Top Yellowstone Winter tours, both of which it purchased in the past five years.

Wheeler said the wages offered for this season, which runs from mid-December to mid-March, were much lower than seasons before. He said that, coupled with the scant work hours, meant guides were relying on state welfare and food from the food bank to make ends meet.

”You don’t see that with any of the other companies,” Wheeler said.

Krautmann is a first-year oversnow guide for Yellowstone vacations. She said she was on the picket line for a lot of reasons, but especially the low pay and volatile hours.

“It has a lot to do with the disorganization of the company itself,” said Krautmann, who is a guide with Yellowstone Vacation Tours, which Delaware North bought in 2016. “We don’t even have a schedule. We don’t know if we’re working the next day until the afternoon or evening before.”

Delaware North isn’t a stranger to national park controversy. In 2015, it trademarked the name “Yosemite National Park,” as well as the names of several hotels and a ski area within Yosemite, and asked for $51 million to give the naming rights back to the National Park Service and Aramark, the California park’s new concessionaire.

An earlier version incorrectly identified the branch of the military Wheeler served in. Wheeler is an Air Force veteran and, at the time of the picket, was a Delaware North employee.