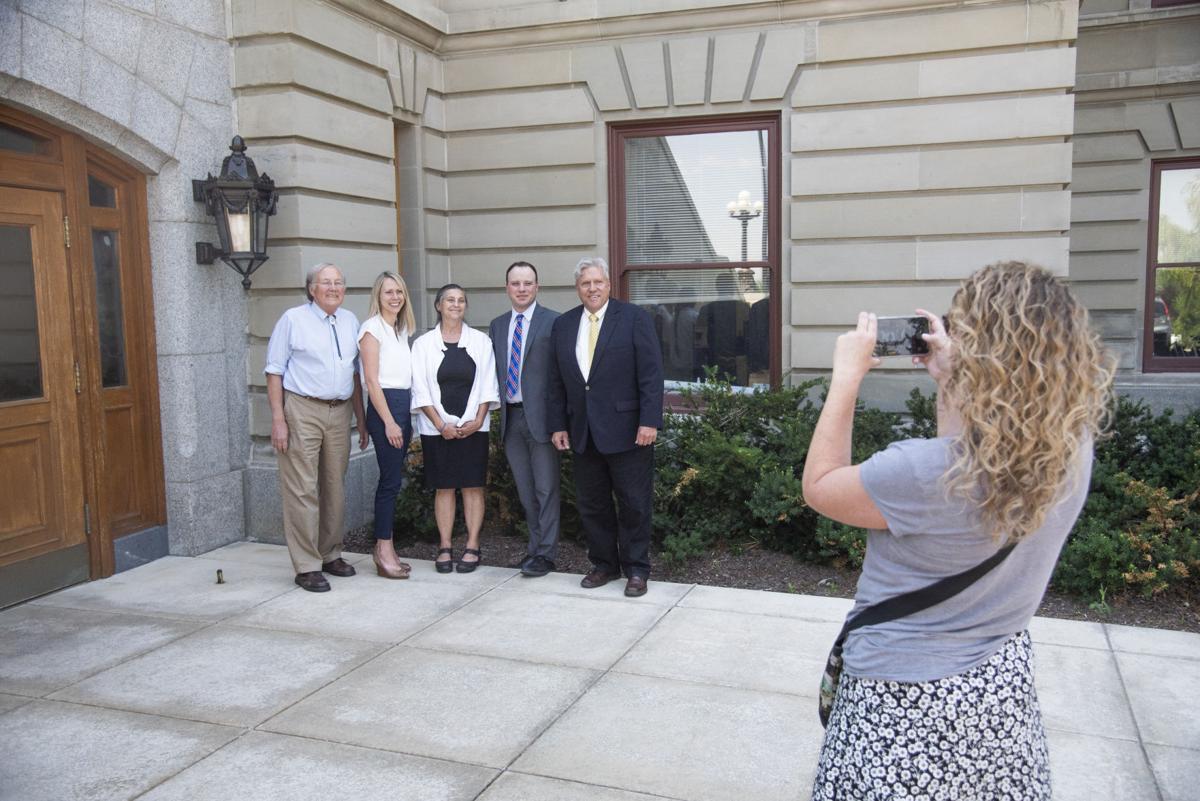 The five members of the Montana Districting and Apportionment Commission are photographed before a hearing to determine the parameters for splitting Montana into two U.S. congressional districts at the Capitol in Helena on Thursday, July 8, 2021. 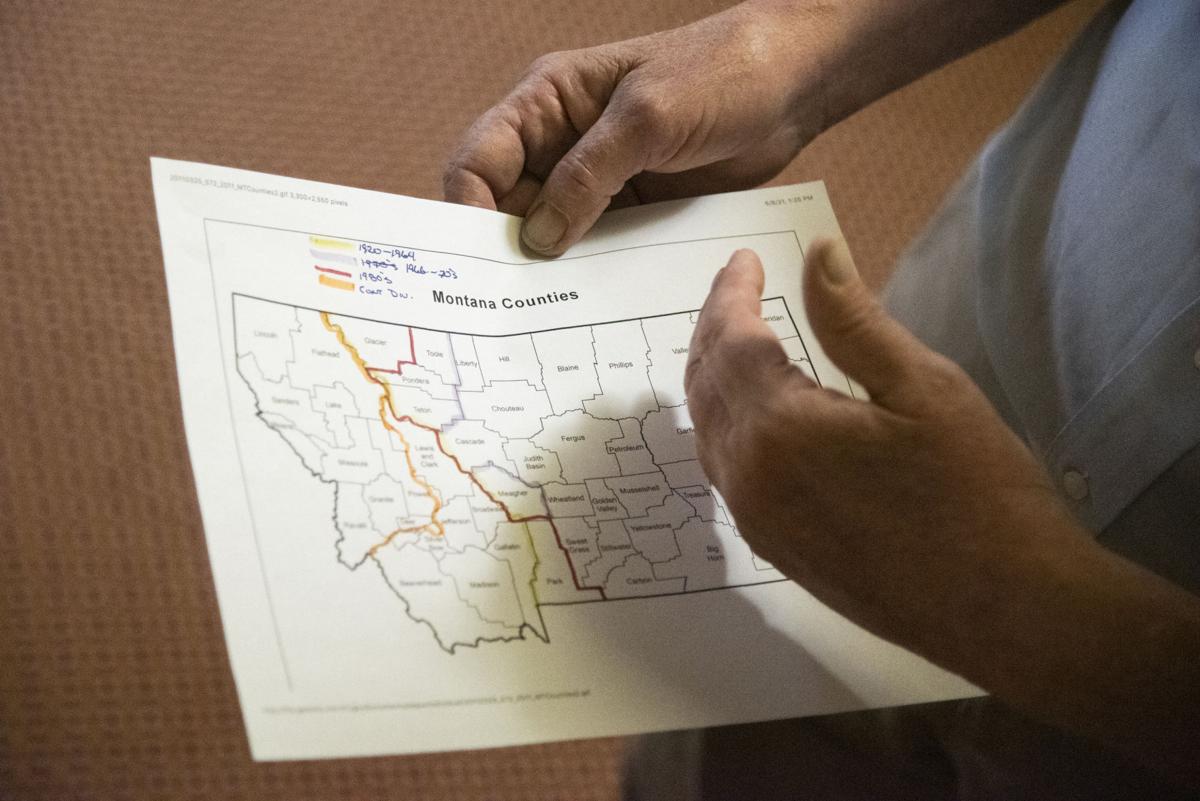 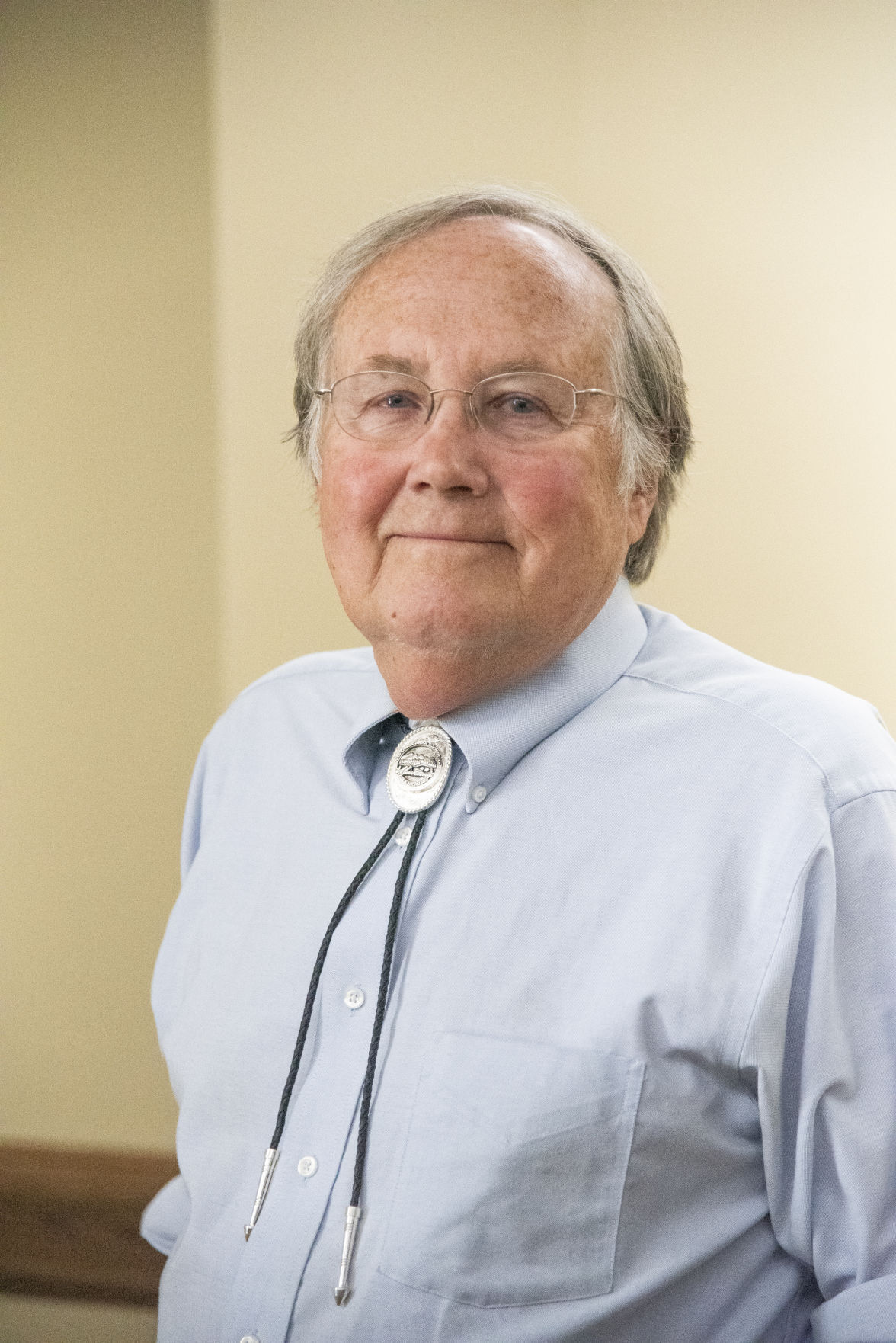 Joe Lamson, a member of the Montana Districting and Apportionment Commission, is pictured before a hearing to determine the parameters for splitting Montana into two U.S. congressional districts at the Capitol in Helena on Thursday, July 8, 2021. 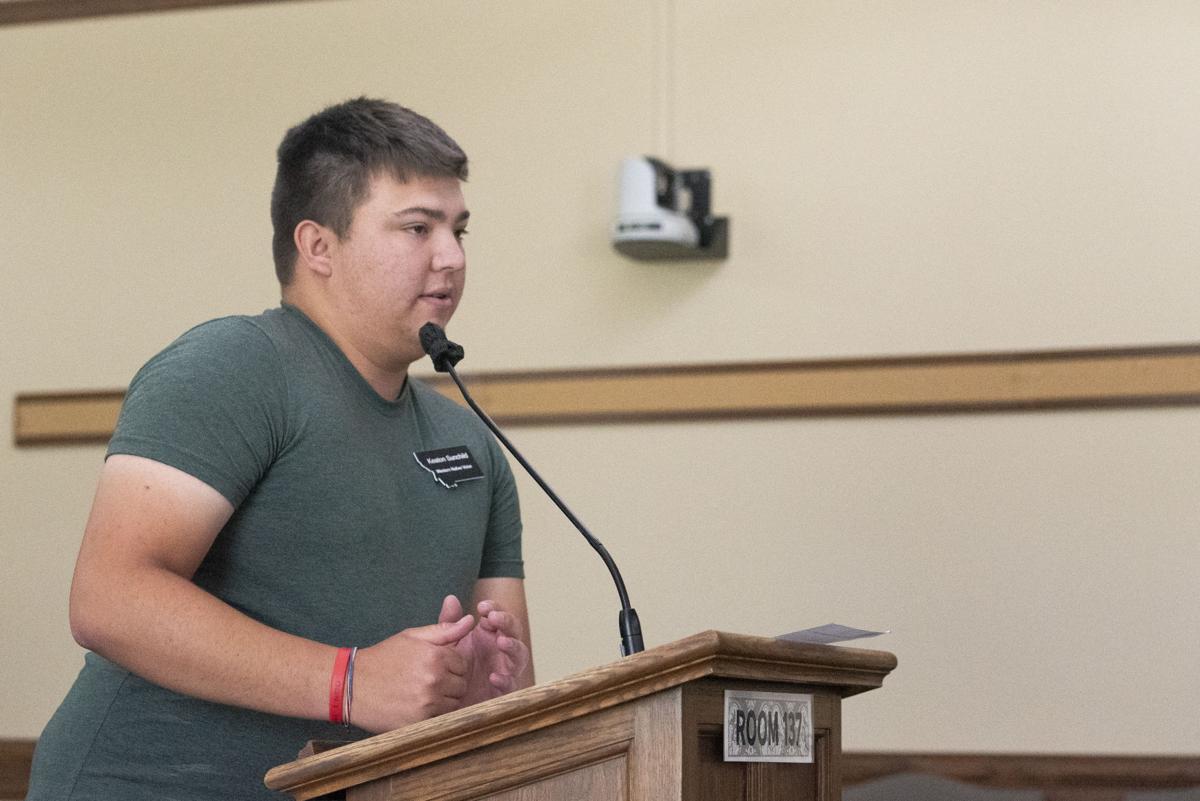 Keaton Sunchild, representing Western Native Voice, speaks during a hearing determining the parameters for splitting Montana into two U.S. congressional districts at the Capitol in Helena on Thursday, July 8, 2021. 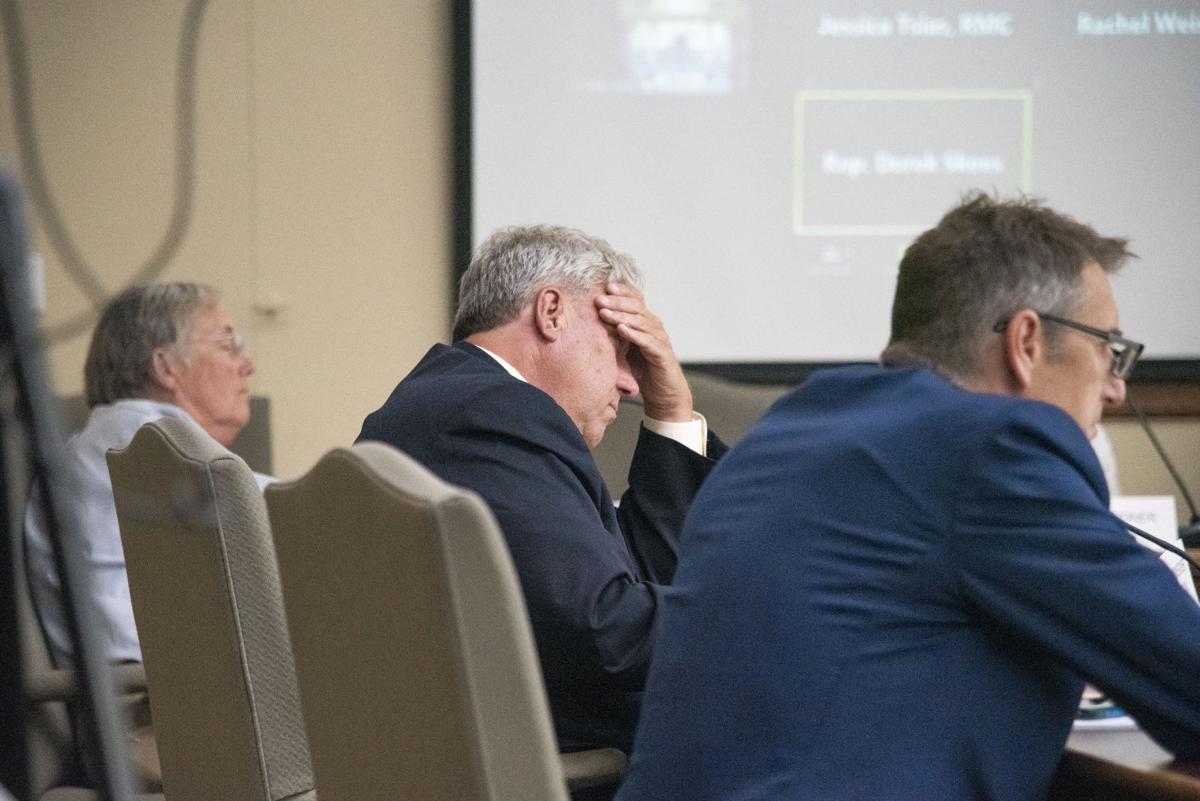 Montana Districting and Apportionment Commissioner Jeff Essmann covers his forehead while listening to a hearing to determine the parameters for splitting Montana into two U.S. congressional districts at the Capitol in Helena on Thursday, July 8, 2021. 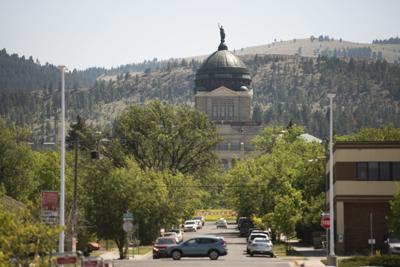 A number of candidates have announced bids for Montana’s new congressional district. But what the new district will look like is still uncertain.

Montana is in a peculiar position. It’s the first state to lose a seat and then regain it. Now the at-large district must be split into two, and the work of doing that is in the hands of five people.

The Districting and Apportionment Commission has been in charge of redistricting the state for 50 years. The five member commission is put to the task of drawing new state legislative lines and figuring out how to equally divide the state’s population within those boundaries every 10 years.

But it has been over four decades since the commission has had another crack at drawing congressional districts, and it’s complicated.

“You don’t just draw a line down the middle. It has to be based (on) where people actually live,” said Joe Lamson, a Democratic member of the commission.

Montana’s population of over 1 million is stretched across 56 counties, and must be almost equally represented on either side of the line. A priority for the commission is making sure a new line doesn’t advantage any political party.

The commission hammered out both the criteria for drawing congressional and legislative districts this month. But a map can’t be drawn without hard Census data, and the commission is still waiting. The data they need won’t arrive until mid-August. From there, a 90-day countdown to a new map begins.

The commission is an independent body chosen by the Legislature, and usually is made up of two Democrats and two Republicans with a neutral tie breaker as chair. This redistricting cycle’s version is composed of Democratic commissioners Lamson and Kendra Miller and Republican commissioners Dan Stusek and Jeff Essmann. The chair is Maylinn Smith.

Lamson’s first time as a commissioner was in 2000, but he’s been involved in the process since 1980. He got his start as a staffer for the Democrats on the commission, drawing maps and conducting research.

Today the commission has a litany of technology at its disposal, like GIS mapping software. When Lamson got his start, the most effective tool they had was a clothing iron.

“Before every public hearing you’ve got to roll out these humongous paper maps and then iron them flat so people could see them,” Lamson said. “We had a couple of good irons.”

Much has changed since then, all of which affects what the new congressional map could look like. Lamson said that 40 years of shifting demographics and population will cause the new map, which won’t see the light of day for another few months, to look completely different.

Carter won the race, tallying just over 19,000 votes to secure Montana’s first ever seat in Congress. He lost reelection in 1891, but then went on to become Montana’s third ever senator from 1895-1901.

Montana gained a second seat in 1913, granting the state two representatives in Congress for the first time. But the pair of seats were considered to be part of one statewide at-large district. From 1913 to 1919, the pair of congressional seats relied on statewide votes — just like how the at-large district that Rep. Matt Rosendale represents works — rather than district-based voting.

At-large districts require voting from the entire population of a district, rather than being divided geographically or by population as in other states. Montana’s at-large district had the largest constituent base at just over a million people prior to the 2020 census.

Montana’s redistricting history — particularly when it comes to state legislative districts — prior to the commission’s creation is messy. So messy that control of redistricting was taken out of the hands of the state Legislature.

The U.S. Supreme Court changed the landscape of state legislative redistricting across the country in the 1960s.

A pivotal case in The Supreme Court — Reynolds v. Sims — created the One Person, One Vote rule. The Court’s ruling determined that congressional and state legislative districts should be drawn with roughly equal population across all the districts.

“The [Montana] Constitution is itself — in many ways — a product of reapportionment in the One Person, One Vote revolution of the 1960s, which shifted and reallocated power to where the people were rather than to counties, which were the basis of representation in the past,” said Anthony Johnstone, a constitutional lawyer and law professor at the University of Montana.

The Montana Legislature had failed time and again to draw lines for themselves, often time creating drastically unequal districts. In 1965, the Legislature was unable to reapportion, forcing a federal district court to step in and draw the map. In 1971 the Legislature tried again, but their plan was struck down due to a 37% population variance — far beyond what the One Person, One Vote rule allowed for.

The reins were handed off to the Districting and Apportionment Commission after its creation in the Montana Constitution. Now, Montana is one of 20 states that has a commission or other mechanism outside of a state legislature that handles redistricting and apportionment.

But that first commission stuck with the federal court’s map. The only shot the commission had at creating congressional districts was in 1980.

“It was just easy,” Brodsky said. “First of all because we had stricter population parameters that we were working with compared to the legislative seats.”

Brodsky gave the commission three proposals, with the commission adopting one of her plans. That plan saw four counties — Pondera, Liberty, Toole and Meagher — move from the western to the eastern congressional district. That map had an absolute deviation of plus or minus or 47 people.

Recreating that map today is impossible.

Commissioner Kendra Miller said that she and other members of the commission have received public comments requesting that the commission just go back to the old map. But over 40 years of population data means that using the old line would create an unequal split in population.

“It’s a hard thing to have a lot of people saying just go back to that line, that old line worked and made sense, and knowing that’s actually impossible,” Miller said. “We sort of have a fresh start and have to draw from scratch.”

The map will feature districts that are predominantly in the western and eastern part of the state, Lamson said. Candidates can run for either seat, regardless of which district they live in.

“If you’re a candidate in Montana you do not have to live in the district,” Lamson said.

Miller said that out of the hundreds of emails and in-person public comment, the most important aspect has been the concept of political fairness. Gerrymandering is a big concern, she said, and people do not want to see either side get an advantage from the soon-to-be created map.

The commission determined the criteria and goals for drawing the congressional districts earlier in July, with a hot button topic being the usage of the word “fair,” and how to quantify what political fairness actually looks like on a map.

“There’s been some people who say we shouldn’t use the word fair, but at the heart of their argument is that they want it to be fair,” Miller said. “If we as a commission can’t take on complicated issues like that, then what are we doing?”

Commissioner Jeff Essmann said that whether a map is fair or not is completely subjective, and using the word fair would provide a direct ticket to court. Essmann and his fellow Republican commissioner Dan Stusek pushed against the inclusion of fairness.

“The point of having a commission with a neutral tie breaker is to try to bring a consensus solution to the situation,” Essmann said. “That doesn’t mean that one side gets an automatic ticket to court if they’re unhappy.”

Though “fair” does not appear in the mandatory criteria for the drawing of the congressional districts, a compromise was made in the goals for the districts, which indicates “no plan may be drawn to unduly favor a political party.”

When drawing the map, the commission has to adhere to both the One Person, One Vote rule and the Voting Rights Act, both products of the 1960s. These two rules ensure that population is kept almost totally equal in districts, and that minority communities are properly represented in the creation of districts.

Keaton Sunchild, the political director of Western Native Voice, said the 1980 map posed problems, especially in how Native Americans were represented. His biggest worry is that the new congressional districts will see a return to those same issues.

“Our biggest concern is that one district has a candidate that doesn’t really have to worry about Native values, or Native traditions or Native voices, and one candidate does,” Sunchild said.

But a mechanism of the Census may stand in the way of actually following those rules.

A Harvard study released in early July using underlying data from the 2010 Census evaluated the Disclosure Avoidance System used by the Census, which adds noise to data to provide extra privacy to participants. Cory McCartan, one of the authors of the study, said that this noise elevates privacy over accuracy, and muddies the actual population data.

“That random noise really messes with your ability to really fine tune those districts,” McCartan said. “So you might think that the two districts are actually the same population, when one of them is actually a few percentage points bigger.”

McCartan said that the noise tends to be bigger in rural areas, which could make it difficult to get exact population numbers from Montana’s rural population. Without accurate numbers, the tight population requirements may be impossible to follow.

Minority groups have been disproportionately affected by this noise.

The study conducted by McCartan and his colleagues indicates that the added noise exacerbates this issue. Miller said that Native Americans have been historically undercounted in the Census, and that in 2010 they were the most undercounted group.

Miller said that the differential privacy mechanism that the Census applied to the 2020 Census is unlike other versions. The Census Bureau cranked up accuracy over privacy for this batch of data, moving closer to the true population numbers than before.

“It probably won’t be down to the individual person,” Miller said. “We don’t really have any other choice. We have to draw districts based on the Census data we get.”

Alex Miller is the county and state government reporter and can be reached at amiller@dailychronicle.com or by phone at 406-582-2648.