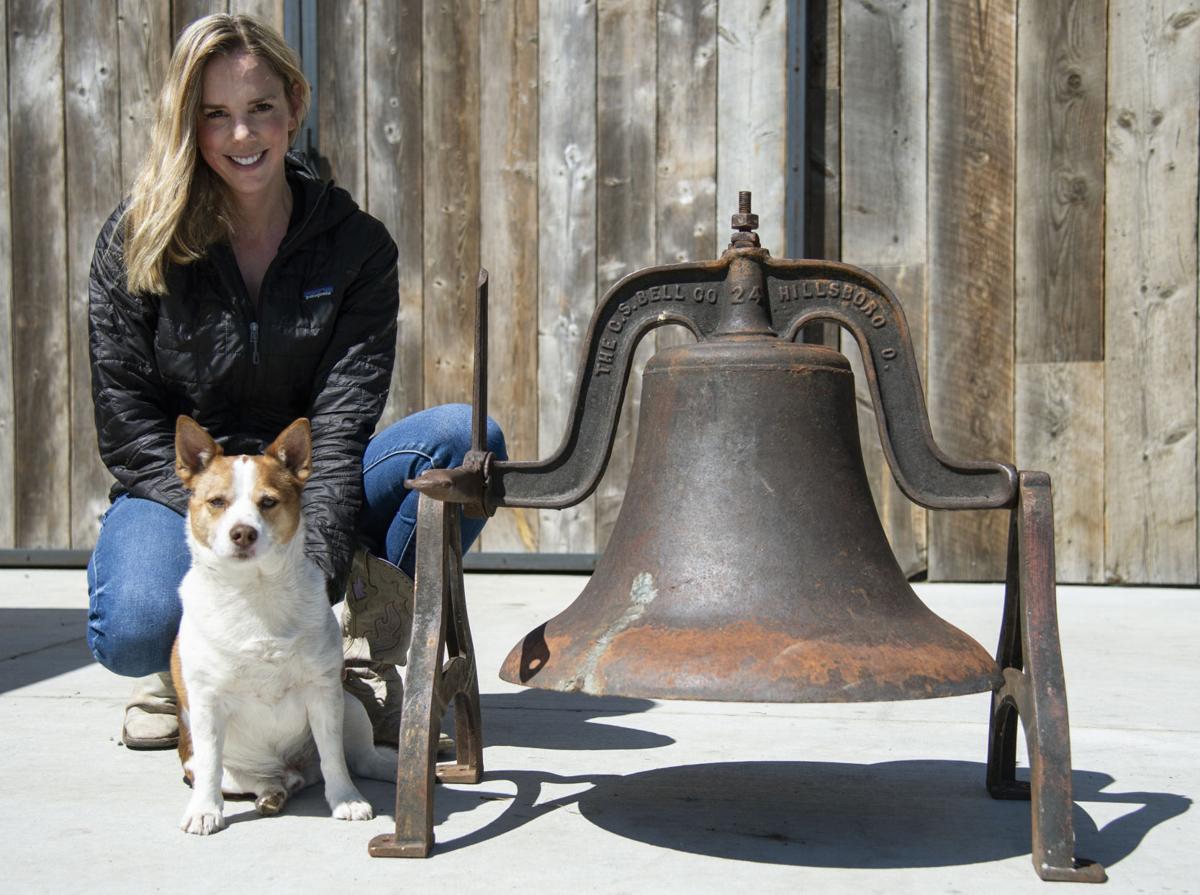 Morgan Stuart and her dog, Bowser, sit next to the Gallatin Gateway School bell that was recovered from Karen ter Telgte after her husband, Ed ter Telgte, took it down in the 1970's. 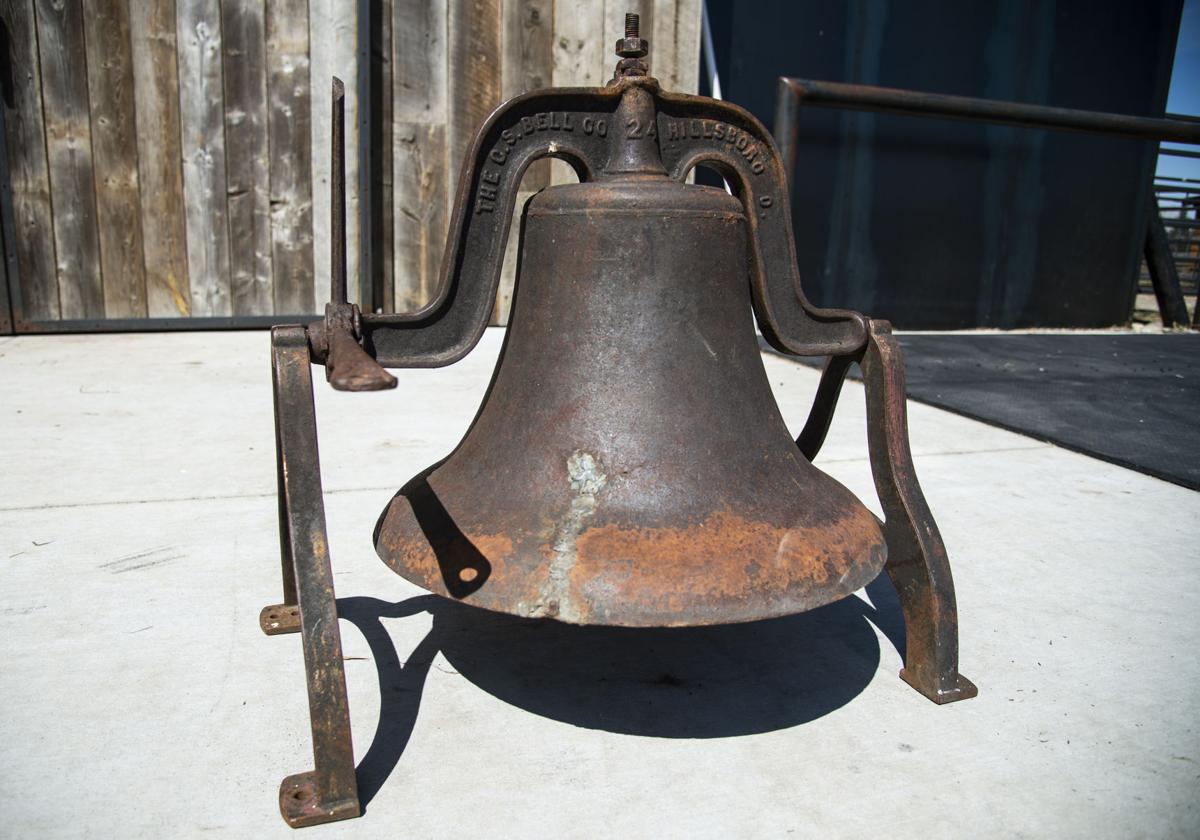 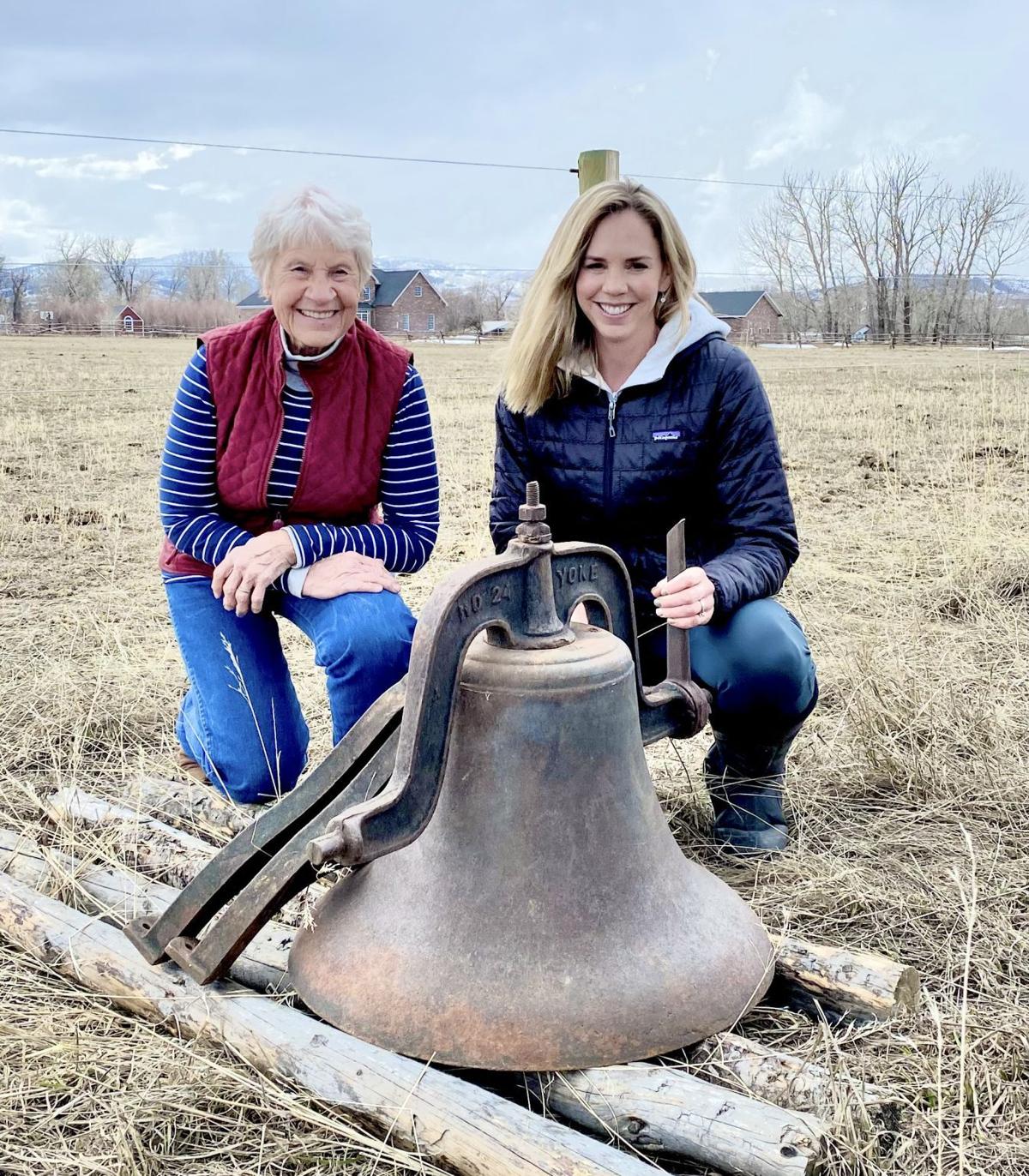 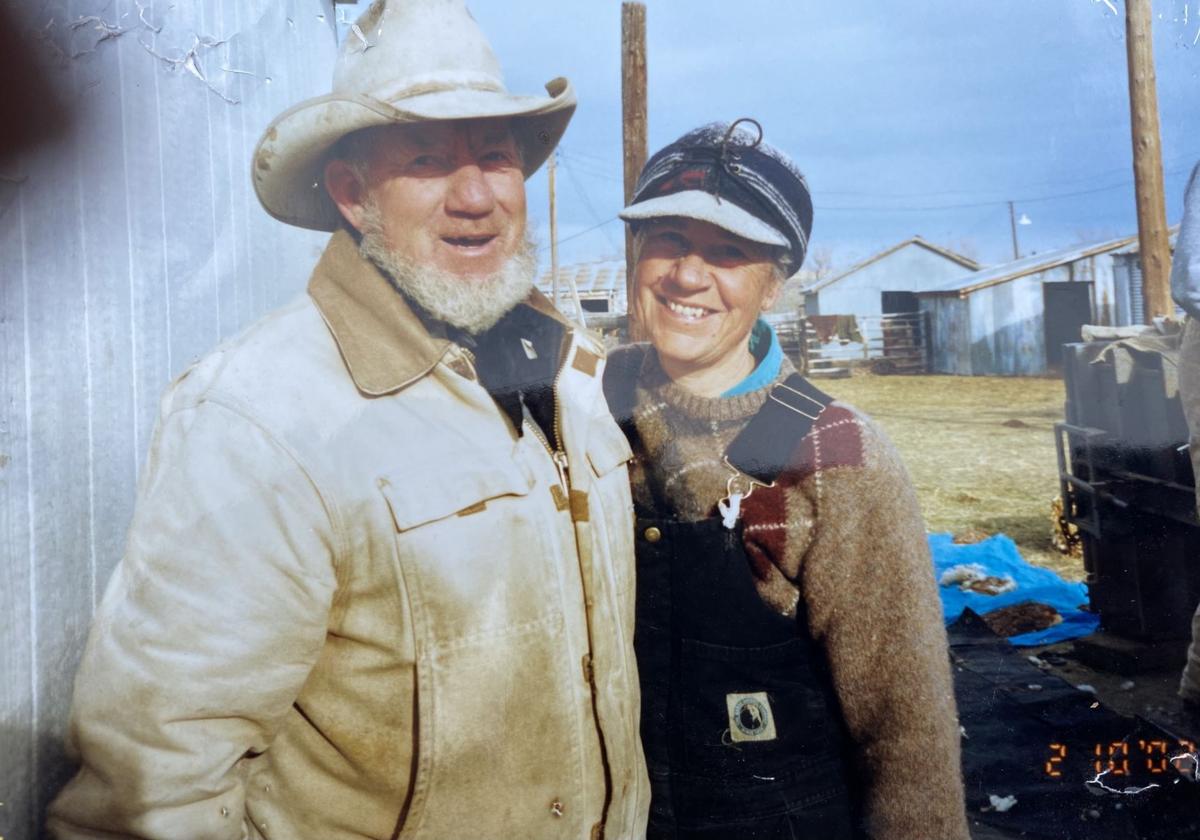 Ed ter Telgte and his wife, Karen ter Telgte. Ed took the bell down from Gallatin Gateway School in the 1970's. 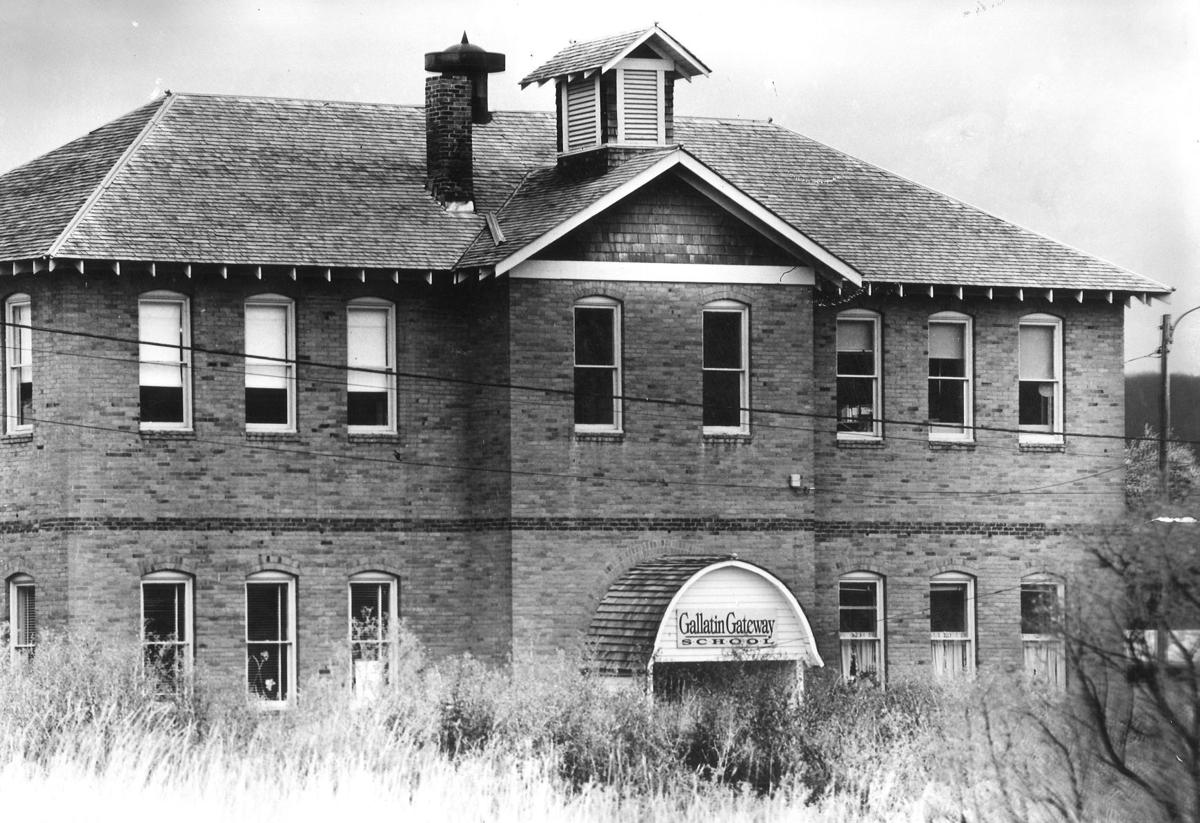 The historic Gallatin Gateway Schoolhouse's bell was removed in the 1970s as the 1914 structure began to age.

Ed ter Telgte and his wife, Karen ter Telgte. Ed took the bell down from Gallatin Gateway School in the 1970's.

In the 1970s, word spread through Gallatin Gateway that the bell in the 1914 schoolhouse needed to be removed over concerns the old bell tower could no longer hold it. Whoever managed to remove the bell could keep it, the district said.

Ed ter Telgte, a rancher who attended the school as a child, took up the challenge. After he removed the bell, it stayed with him and his family, including on their move to Columbus, Montana.

Decades later, the bell was returned to Gallatin Gateway with the help of a sleuthing parent, Morgan Stuart, and the blessing of ter Telgte’s wife, Karen.

Ter Telgte, who died in 2008, held on to the bell in hopes that it could be put back to use. To those who knew him, ter Telgte was a man who loved kids and valued education.

“Ed saw the value in it a long time ago and the historical value of saving it,” Stuart said. “He really wanted it to be used again.”

Stuart, a parent with three children at the school, said her interest in tracking down the bell was sparked when she heard someone at a local thrift store mention that they were there when the bell was taken down in the 1970s.

Stuart said she had the name ter Telgte and began searching through obituaries for people with the same last name. After finding Ed, she reached out to his children on Facebook. With the help of a mutual friend, Stuart was able to get in touch with Karen.

Karen happily reported to Stuart that the bell was still in her possession. Stuart said Karen was glad the bell ter Telgte had valued enough to save would be returned to the district.

“I feel like with our valley changing so much and a lot of emphasis on new structures and tearing down the old, it’s important to return the bell,” Stuart said. “It’s teaching our kids that we can save things and there’s a historical value that’s meaningful to the community.”

There are a lot of people in Gallatin Gateway who have strong generational ties to the area and it’s important to respect that, Stuart said.

“It’s trying to reintroduce something to where it belongs,” Stuart said.

The bell, which has a partially repaired crack down its side, dates to the 1910s, according to Theresa Keel, superintendent of Gallatin Gateway School District.

Keel said when she first started at the district a few years ago, people didn’t know if the bell was still in its tower because it was dangerous to go up there.

“It doesn’t seem to have had the value when they took it down as we have for it now,” she said. “They really just wanted someone to take it off their hands.”

With the bell found, Keel said there have been talks about placing the bell in a renovated tower or placing it inside the entrance to the schoolhouse as a memorial.

The future of the bell partially depends on Gallatin Gateway’s bond election on May 4.

The district is asking voters for a $7 million bond to renovate the 1914 building, update deferred maintenance, upgrade classroom and labs, add additional teaching spaces and expand the cafeteria and gymnasium.

“We haven’t had a bond since 2000 and we have a lot of pieces of our school that need to be fixed,” Keel said.

The bond process was first launched in November 2019 and has included a lot of resident input, according to Keel.

“When we first started this process, the most cost effective route would have been to demolish the schoolhouse. And we heard loud and clear from the community that this building is a part of our heritage, part of our community.”

The school’s building committee initially voted for the 1914 portion of the school to be demolished. But after public outcry, they reversed course and the school has committed to trying to save and renovate the structure.

“We heard that message, which is why we’re doing the renovation, listening to the community and being prudent about how we spend taxpayer money because we know property taxes are no fun to pay and we want to make sure we’re honoring their commitment to us,” Keel said.

Since it was announced the bell had been found earlier this month, Keel said she’s heard from a lot of residents who remember when the bell was in the schoolhouse’s tower.

“Once this story started to hit, people really got excited about the process of bringing the school back to its glory,” she said.

Stuart, who grew up in Washington attending a two-room schoolhouse, said she has always loved what bells symbolize. As a child, she remembers she and her fellow students would take turns ringing their own schoolhouse bell at the start and end of each school day.

“For me, it’s the idea of freedom and marking a new beginning or ending,” Stuart said. “There’s a lot of that going on in the valley right now, a lot of change …. It symbolizes the past and the present and bringing it together.”