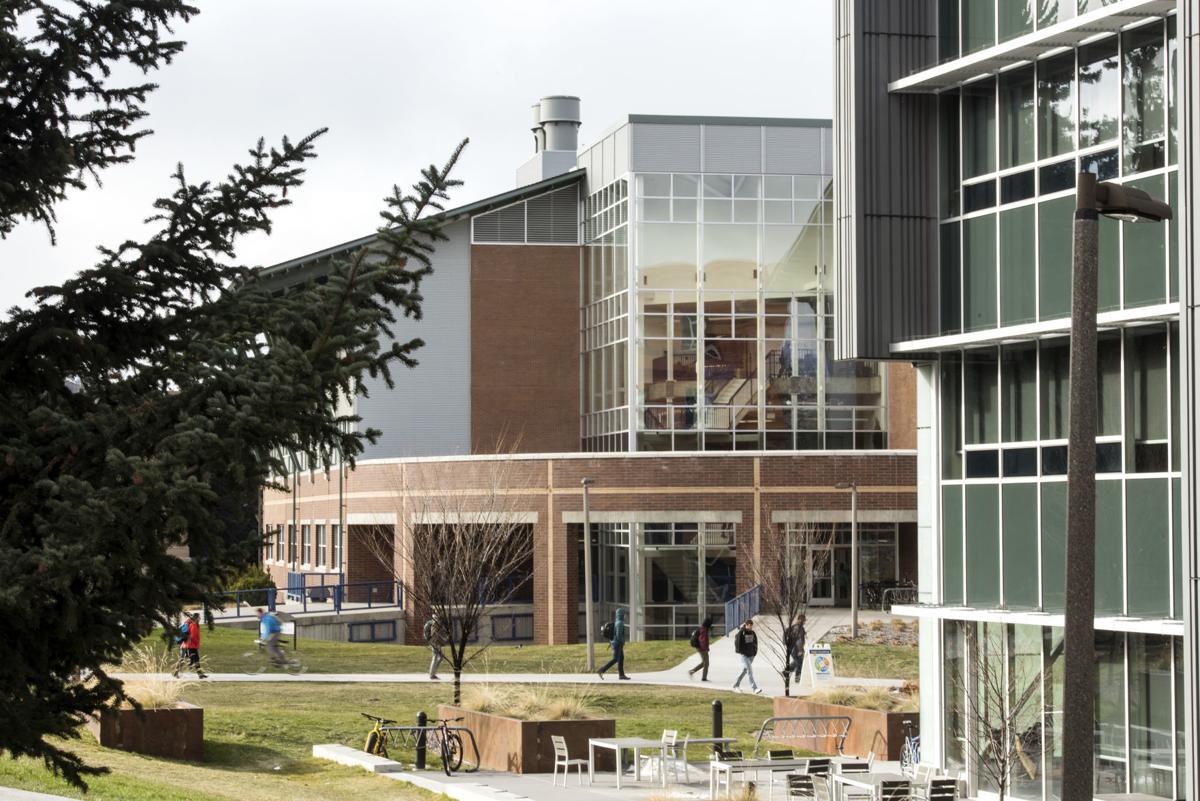 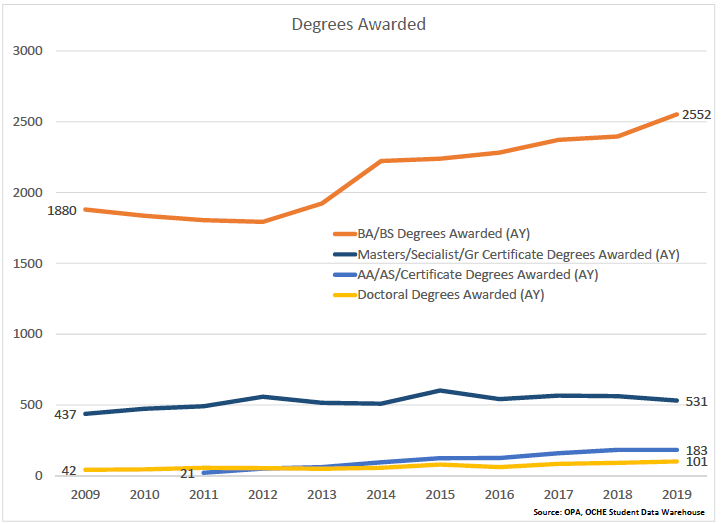 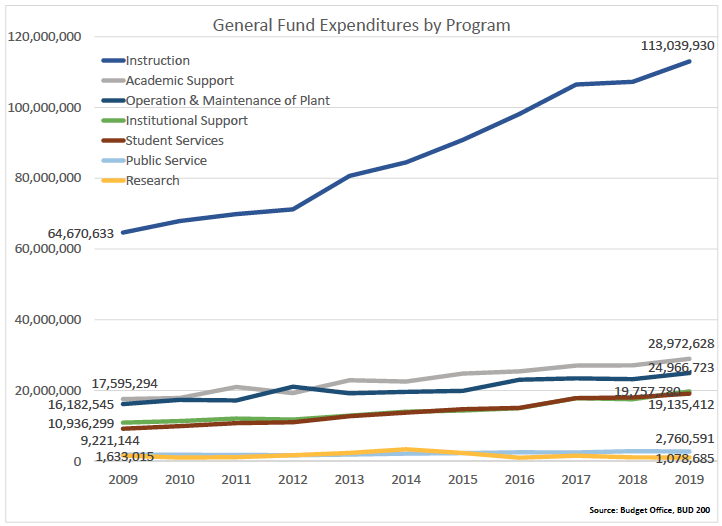 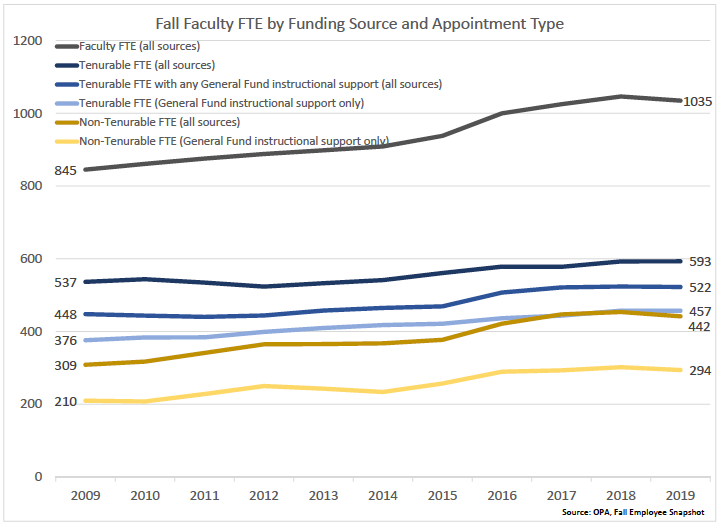 In a decade when many American universities are struggling with falling enrollment, Montana State University’s student population has grown, along with its graduation numbers and spending on instruction.

MSU’s fall report card on itself also showed that while the Bozeman campus still has more tenured and tenure-track faculty than non-tenured or adjunct instructors, the university has ramped up hiring of non-tenured teachers.

The fall report card was presented Wednesday to campus leaders at the University Council. It gave an overview of how many students and employees the Bozeman campus has, how many students earned degrees and where the campus spends its general fund budget.

“Things are going very well at Montana State University,” President Waded Cruzado said afterward. “What I really like is the campus is really unified behind the goals of our strategic plan. … I’m excited about the future.”

Tracy Ellig, MSU spokesman, said that about a year after Cruzado arrived in 2010, she held a retreat with campus leaders to talk about how MSU could reduce dropouts and increase graduation rates.

“There was a lot of consensus it would be impossible to do unless we became more selective,” Ellig said. That would have meant raising academic requirements and making it harder for students to get into MSU, which would have gone against Cruzado’s often-repeated mantra that land-grant universities were created to educate the sons and daughters of working families.

“The group was so skeptical,” Ellig said, of Cruzado’s goal of improving graduation rates while still keeping the doors open to Montana high school students.

Cruzado prevailed. And in the last 10 years MSU has increased the number of students graduating within six years, the federal standard, from 48.3% to 56.1%. Chris Fastnow, director of planning and analysis, said MSU still has room to improve, but called the trend “quite beautiful.”

“We’re doing it, not by closing doors, but by giving students more tools to be successful,” Fastnow said.

MSU has encouraged students to take 15 credits per semester instead of 12, and curricula have been redesigned, she said.

MSU has also bucked national headwinds, Ellig said, by increasing enrollment at a time when the student population has been shrinking. The Chronicle of Higher Education reports that the number of U.S. college students has tumbled since the recession by 3 million to 26.4 million.

“Nationally they’re talking about an ‘enrollment crash,’” said Chris Kearns, vice president for student success. “This has been a remarkable achievement by this community.”

Fastnow’s report showed that MSU has increased the number of bachelor’s degrees awarded by 35% in the past decade, from 1,880 to 2,552. Two-year Gallatin College’s numbers have risen quickly from 21 to 183 this year.

With Ph.D.s, MSU has increased the doctoral degrees awarded from 42 a year, a level that had been flat for decades, to 101 this year.

“We broke 100!” said Fastnow, adding that many Ph.D.s go on to start businesses and contribute to the state’s economy. Brett Gunnink, engineering dean, called that “a very big lift for faculty to improve that much.”

--Tenured and tenure-track faculty and scientists increased 10.4% over the decade, from 537 to 593 full-time jobs. Within that number, tenurable faculty working on instruction alone increased by 22% from 376 to 457.

--Nontenured faculty, such as adjunct instructors, increased 43% from 309 to 442 full-time equivalent (FTE) jobs. Within that group, adjuncts working only on instruction increased 40% from 210 to 294 FTE.

--Other university staff increased a mere 4.5% from 1,864 to 1,949 full-time jobs as many positions were streamlined or required to do more.

--The student retention rate (first-time freshmen returning for their sophomore year instead of dropping out) has risen from 72.2% to 76.5%. That’s progress, Fastnow said, but “there’s more we can do.”

--The portion of MSU’s $210 million general fund budget (taxpayer and tuition dollars) spent on instruction has grown to $113 million a year or 54% of spending, well above the commissioner of higher education’s benchmark of 50% and nearly double the $64.6 million spend in 2009. When instruction is added to student support spending (such as deans, libraries and financial aid) and student success (veterans, disability services and other offices directly helping students), the total is 77% of the budget going to benefit students, which is well above the 70% target.