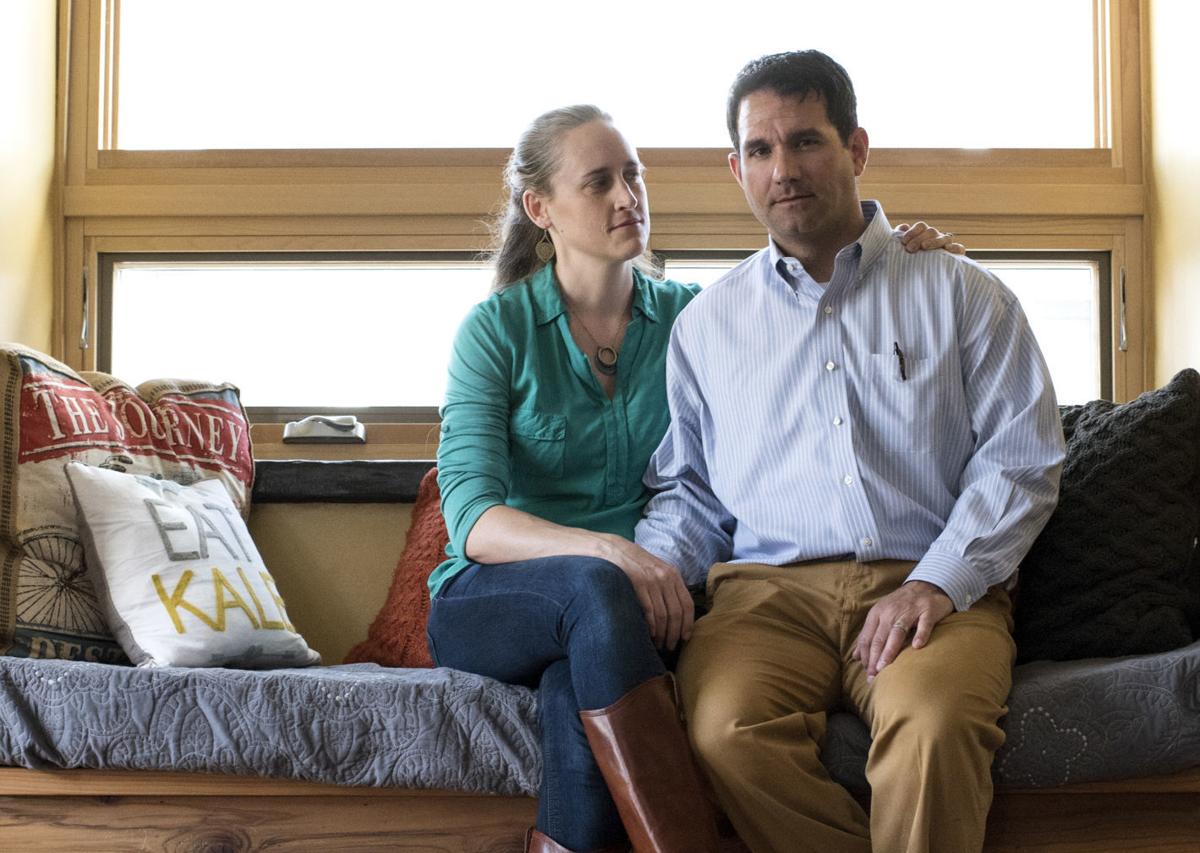 Matt Caires sits with his wife Brandyn Caires in their home on Thursday. Matt’s mother, Leona Caires, was the victim of a fatal school shooting 22 years ago in Moses Lake, Washington. 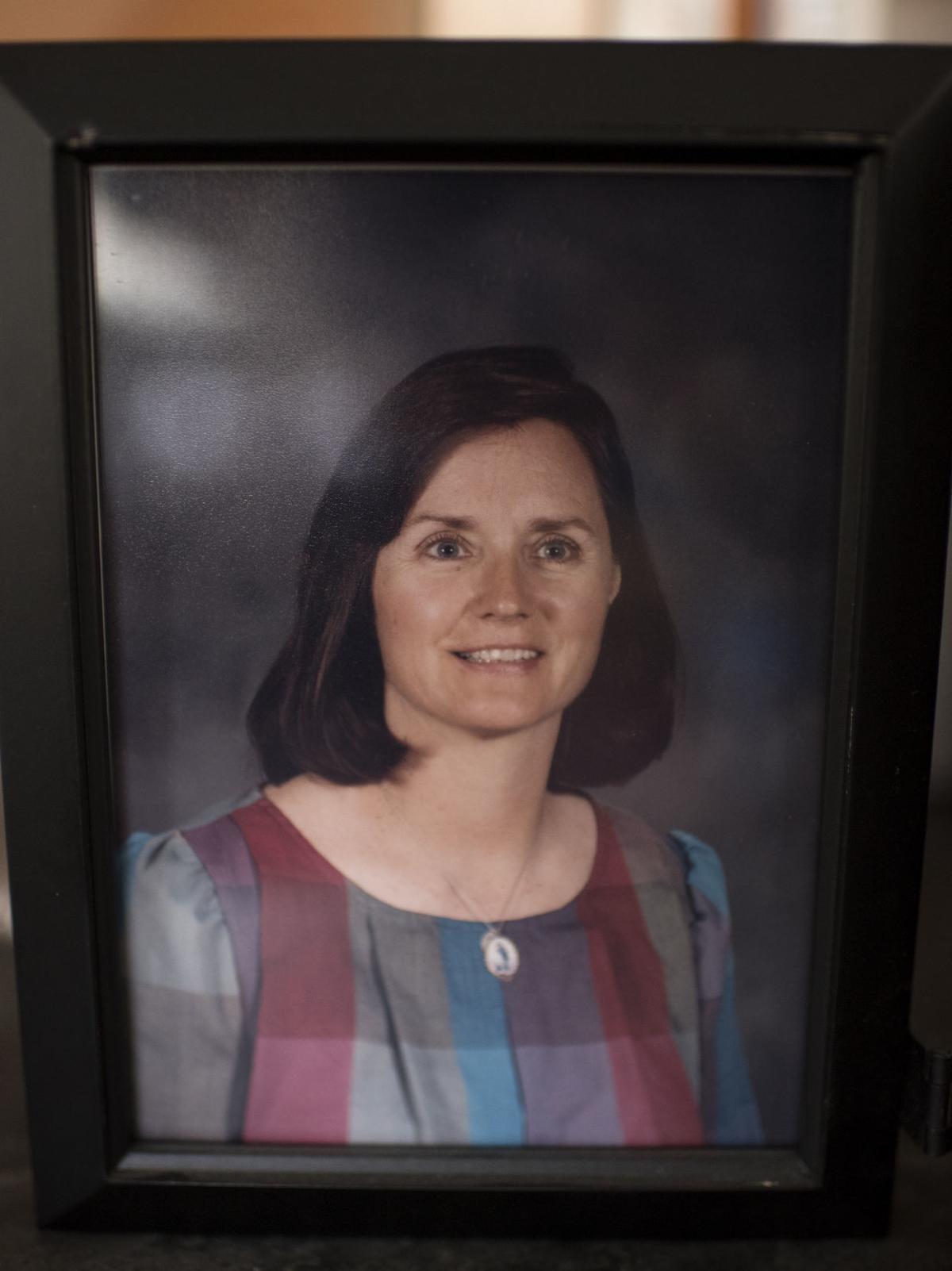 Leona Caires was fatally shot by a 14-year-old in one of her middle school algebra classes 22 years ago in Moses Lake, Washington.

Matt Caires sits with his wife Brandyn Caires in their home on Thursday. Matt’s mother, Leona Caires, was the victim of a fatal school shooting 22 years ago in Moses Lake, Washington.

Leona Caires was fatally shot by a 14-year-old in one of her middle school algebra classes 22 years ago in Moses Lake, Washington.

Every time there’s a school shooting in America, Matt Caires feels the sting of memory.

His mother, Leona Caires, a teacher, was shot to death in her classroom 22 years ago.

Today Caires, 43, works as dean of students at Montana State University. He and his wife, Brandyn, have a beautiful baby girl they dote on.

He’s been reluctant to talk publicly about his mom, his grief and the lessons he sees in the tragedy.

Back in 1996, Caires was a 21-year-old student at Washington State University, a “student council nerd” with dreams of running for Congress. He’d been elected to the Pullman City Council and was about to win an election for student president.

On Feb. 2, a Friday afternoon, he got a phone call at the student council office from his fraternity brothers. His dad had phoned and needed him to call back.

“One of the guys said, ‘Your mom’s been shot,’” Caires recalled. “My reaction was, of course that’s not true. She’s a school teacher.”

Something felt wrong when he couldn’t reach his dad. Finally he got through.

“He just said, ‘Your mom’s gone,’” Caires said, wiping away tears. “I haven’t thought about this in so long.”

Leona was the mother of four kids, all successful, all in college. She was teaching math at Frontier Middle School in Moses Lake, Washington, where her husband of 28 years, Steve, was assistant principal.

The week after the shooting was pretty hazy. The family buried Leona in Coeur d’Alene, Idaho, where the kids grew up and they still had a home. She was 49.

“She liked helping people,” Caires said. And she had standards. When her kids had piano or guitar lessons, she demanded they practice, he said.

“She believed if you work hard, good things will happen.”

Caires never wanted to pay close attention to the details of the shooting, but The Spokesman-Review, Associated Press, New York Times and television reports followed the crime, trial and aftermath for more than 20 years.

Leona had been teaching eighth-grade algebra after lunch when 14-year-old student Barry Loukaitis walked in carrying a hunting rifle and two handguns of his dad’s that he’d taken from an unlocked cabinet and a family car. He was wearing a long black trench coat, black pants, cowboy boots and a black hat.

Barry shot and killed 14-year-old Manuel Vela, who had apparently teased him, and mortally wounded 14-year-old Arnie Fritz and teacher Leona Caires. He shot 13-year-old Natalie Hintz in the arm, wounding her severely. It took moments for surviving students to realize that this wasn’t a drill or bad joke or play.

PE teacher and wrestling coach Jon Lane heard the shots and ran to the classroom. Barry held his rifle on Lane and the surviving 14 students. Students later testified that Lane persuaded Barry to let the injured and a diabetic student leave.

As police gathered in the school hallway, Barry threatened to shoot more students. He ordered Lane to put the rifle barrel in his mouth because he needed a hostage to protect him from police snipers. Lane took the barrel as if to comply, but then grabbed the rifle away and pinned the shooter to the wall.

Barry was tried as an adult, his trial moved 180 miles to Seattle to find an impartial jury. He pleaded insanity, an idea that Caires’s dad found unbelievable because the shooter had carefully planned the attack.

Caires said he doesn’t really know why the shooting happened, but his dad had always told him that Barry felt bullied.

Barry’s mother testified he had been a friendly kid until seventh grade. She said she suffered depression, her marriage was falling apart and she’d talked about suicide. By eighth grade Barry became withdrawn, gloomy and angry.

Friends testified he liked a Pearl Jam video where a teen imagines using violence against classmates. He liked the movie “Natural Born Killers.”

In 2012, the U.S. Supreme Court ruled it unconstitutional to sentence juveniles under age 18 to life in prison without parole. So last year, at a new sentencing hearing for Loukaitis, the original judge came out of retirement and issued a new sentence – 189 years in prison.

At the resentencing, Loukaitis, age 36 and graying, said, “I am sorry for what I did. What I did was weak and evil and senseless.” He said he didn’t have the tools at age 14 to deal with his anger and hatred of others.

Matt Caires did not attend, but his younger sister Victoria was one of those who testified. She said she felt deep hatred for Loukaitis. She said that her mother had loved teaching math.

“She died with a piece of chalk in one hand and an eraser in the other,” Victoria said.

Caires said it might surprise people, but he feels Loukaitis is “one of the victims of this atrocity. He is a perpetrator, but also a victim.”

That’s why it’s so important that when students see someone being bullied, he said, “They have to stand up for the student being bullied.”

“If you see something, say something,” Caires said. “These kids need help.”

The tragedy was hard on his whole family. Caires said his dad left Moses Lake and moved to a smaller school.

“It was a really hard year,” Caires said. “Something like that happens, it shakes you to the core. It was hard for me to see people, every day, feeling sorry for me. It was the subtext of every conversation – ‘How are you feeling?’”

He won the student election, but it was “always in the shadow.”

A year after her death, Washington State University dedicated a peace garden to his mother’s memory.

Caires decided he didn’t want to let the shooting define his life, make him a victim or violent or hateful.

He ditched the idea of law school and running for office. People get into politics for the right reasons, he decided, but they have to make too many compromises.

“I did not want to give up my principles. I wanted to make a difference,” he said, by working with college students.

He started graduate school in Vermont and there tried to reinvent himself. He became obsessed with hiking, getting fit and spending time alone outdoors.

“It all was grieving for me,” he said.

He often wondered, “What am I doing? Would my mom approve?”

Now that he’s a dad, he sees the tragedy of his mom’s death in a new light.

“The single hardest part of losing my mom is my kid, growing up without her grandma,” he said, fighting back tears. “She was a really good person, and my kid will never know her.”

It seems none of the remedies suggested in the wake of the Parkland school shooting would have saved the life of Leona Caires.

Even arming teachers wouldn’t have changed things, Caires said. There’s no way his mom would have carried a gun at school.

“I don’t think it would have made a bit of difference,” he said. “There wouldn’t have been time to retrieve it.

“I own guns, my parents owned guns,” he said. “They’re difficult to use. The only individuals I trust with guns in active-shooter situations are military and law enforcement who are trained.”

If the law ever changes, Caires said he’d do everything to make it work, but he thinks it’s a bad idea.

“I’ve never seen a time where the answer was more firearms, where more guns would lessen the chance of violence.”

“Twenty-year-olds, plus alcohol, plus guns,” he said, are a bad combination.

“It’s incredibly rare that college students endanger someone else with a gun,” he said. “The danger is they’re going to endanger themselves.

“I still believe less guns is the answer.”

Caires said he feels more courage to talk about his own family tragedy after seeing the students of Parkland, Florida, speak out and sparking a movement.

“If I could give them advice, it would be that they have to understand history,” he said. “This is a violent country.

“There is a long arc of violent history in our country and it will take a long time to make changes. Prepare for the long haul. Be ready for a lifetime of dedication and work.”

He cited the Million Mom March, held in Washington, D.C., on Mother’s Day 2000, to call for stricter gun control. It drew an estimated 750,000 people and more at satellite marches.

Yet 18 years later, gun restrictions have been loosened, not strengthened, he said.

“I don’t think there’s ever going to be a way to eliminate school shootings,” Caires said. He can’t envision a world where third-graders are patted down for weapons, or have to walk through metal detectors, or where armed guards stand at every school door.

“I don’t think we want to live in that world,” he said.

At the same time, he wants to be optimistic, to believe that our lives, our country will continue to get better.

“If there’s anything my mom taught me,” Caires said, “it’s unrelenting optimism.”