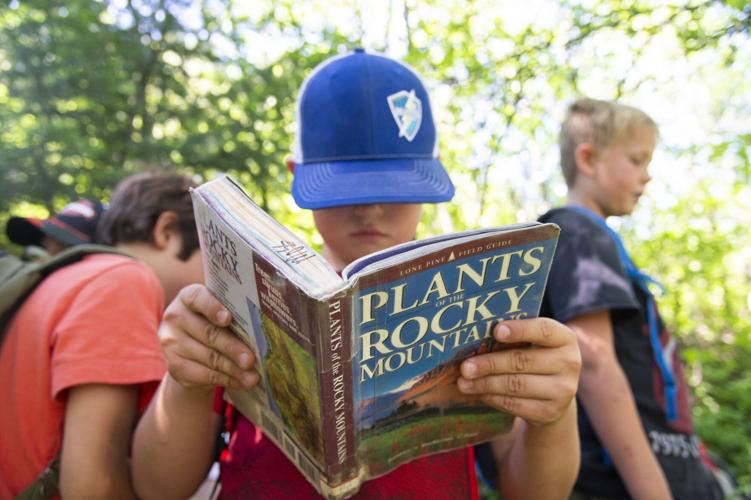 Joris Hand, 8, consults a copy of “Plants of the Rocky Mountains” while identifying deciduous trees during a Montana Outdoor Science School summer camp on Wednesday, June 30, 2021. 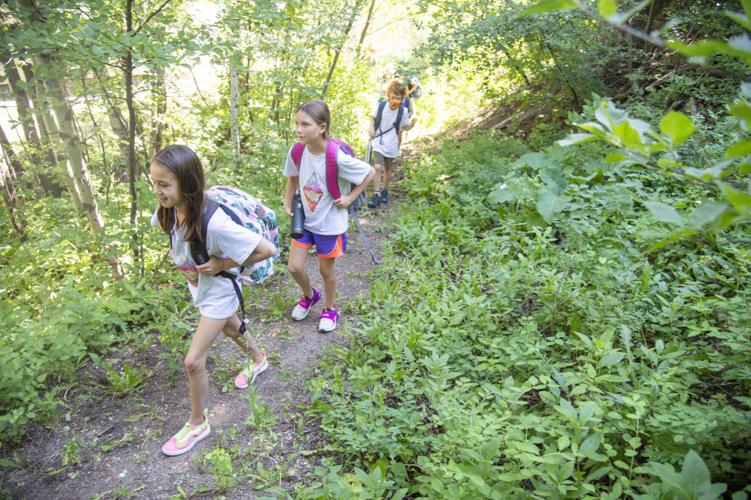 Samantha Lee, 9, left, and Eddi Larson, 9, walk on a trail to look for deciduous plants to identify while attending a Montana Outdoor Science School summer camp on Wednesday, June 30, 2021. 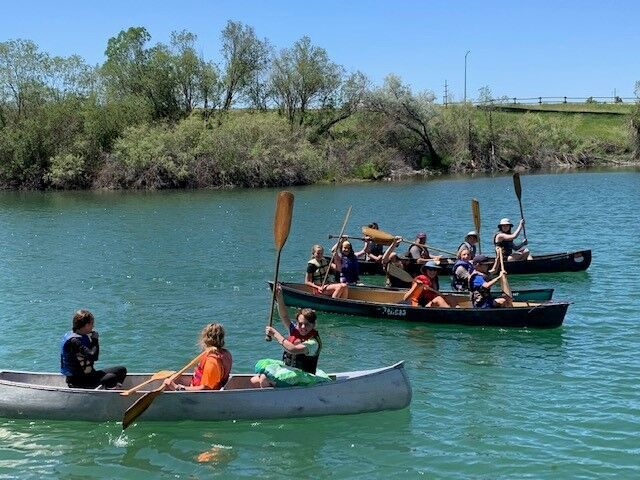 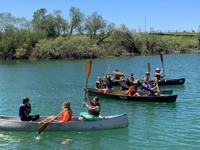 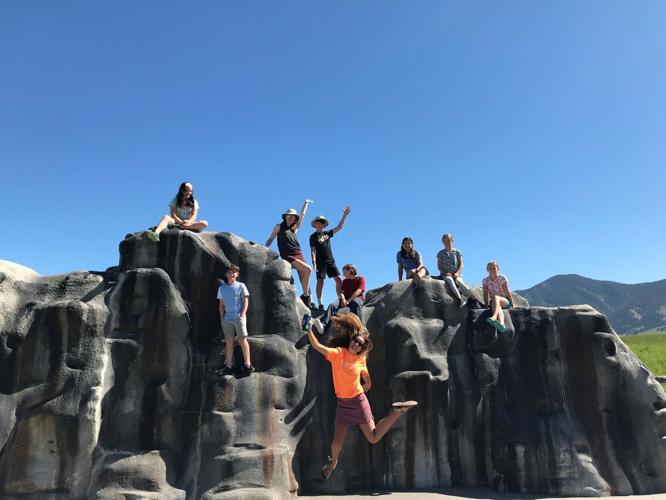 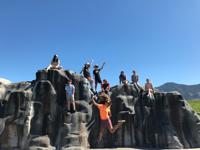 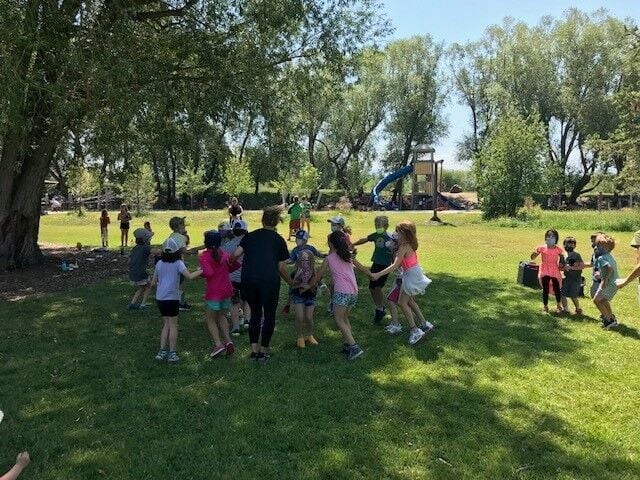 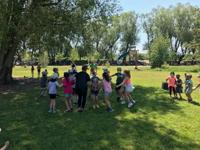 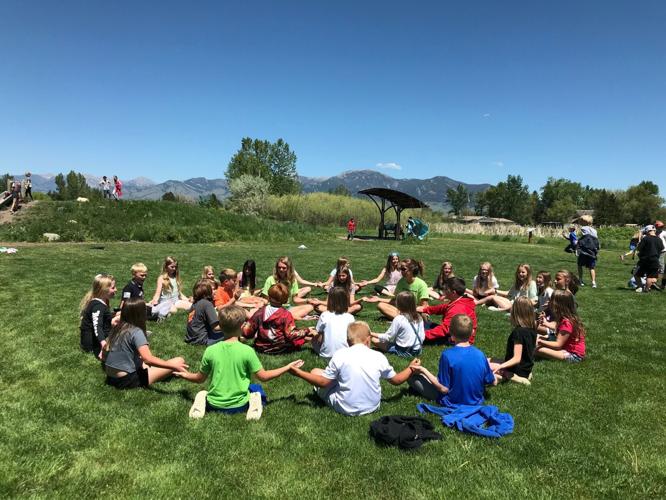 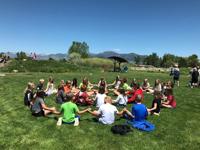 Joris Hand, 8, consults a copy of “Plants of the Rocky Mountains” while identifying deciduous trees during a Montana Outdoor Science School summer camp on Wednesday, June 30, 2021.

Samantha Lee, 9, left, and Eddi Larson, 9, walk on a trail to look for deciduous plants to identify while attending a Montana Outdoor Science School summer camp on Wednesday, June 30, 2021.

When summer sizzles its way into the Gallatin Valley, schools will empty of children and grow quiet as the sun-drenched days lengthen.

Summer for many children is a time of camps, arts and crafts, sports, pool days, new friends, music and theater and rafting, fly-fishing, or hiking.

For the growing families in and around Bozeman looking to enroll their children in summer camps, they’re navigating registrations filling up earlier than previous years and increased competition for the spots remaining.

As of mid-May, MOSS — which offers various camps for children from K-9 grades — had over 1,060 children registered for its camps, up from around 850 campers the previous summer.

“It’s a pretty big jump. We have our member-only registration that starts in February, and we were 80% full within the first day of members-only,” Gitch said.

Recognizing the need, Gitch looked at the schedule and added a few more camp selections, which required hiring more instructors and renting another 15-passenger van.

Even so, there were around an additional 280 children on waitlists for MOSS’s adventure and nature-centered camps.

“We’re trying the best we can to meet the demands of child care in Bozeman. It’s growing like crazy,” Gitch said.

MOSS isn’t an outlier in the valley.

“Camps in Bozeman are so cutthroat,” Gitch said.

Whether overnight, day camp, sports or adventure style camps, the demand for summer care is rising alongside the housing prices and the influx of people, leading families to register earlier as providers work to expand services and maintain affordable prices.

With increased need for summer camps in the area comes more competition over available slots, according to providers.

Child Care Connections is offering its summer care grants again this year. The funding, which comes from federal COVID-19 relief, opened to families via an application process on May 20.

Ahead of the scholarship application opening, Peterson said they were seeing “massive” interest in the grant. It was likely they would run out of the money — which is available on a first come, first served basis — quickly, she said.

“Parents are really in need of support to fund their summer child care. It’s one of those expenses that sneaks up on you and might be a bit unexpected,” Peterson said.

The scholarship money — either $1,500 or $2,500 — is flexible, with families able to apply it to licensed child care providers, summer camps and babysitters or nannies.

Peterson said she knew of some families who are still searching for summer care and are having a hard time finding it. If they haven’t started looking by April or earlier, they’re late to the search, she said.

“In the Gallatin area and across Montana, the number of young families are growing. We’re really seeing with that population growth, a lot more kids are needing care,” Peterson said.

Bozeman grew by a total of 3,753 people between April 2020 and July 2021, according to U.S. Census data. The majority of that were new residents who migrated to Bozeman, followed by natural population growth.

With the population growing and competition increasing, camps are also reporting their registration and subsequent waitlists are filling faster than in previous years.

“We were sold out almost entirely in February which is unheard of in 27 years,” said Katie Goodman, director of Camp Equinox, a theater camp for students in grades first to eighth.

With spots filled so early, Goodman said she worked to open a few additional spots.

Goodman said she’s seen another reason for the rush to sign children up for summer camps. After a couple years of decreasing camp capacity due to COVID-19, most camps in the area are back to full capacity this summer. But the effects of smaller camps might still be lingering.

“We sold out during the pandemic at lower levels and people were panicking earlier — ‘I have to get my kids spots, can’t be left in the lurch again.’ They’re afraid of missing out because a lot of camps were full at smaller sizes,” Goodman said.

For Gallatin Valley YMCA’s camps, they saw interest grow so much in the last few years that they decided to expand to a new location in Belgrade this year.

Weaver, who grew up in Bozeman, said there are a lot more options for camps than when she was a child.

“We didn’t have the option to go to camp. Now there’s so many, which is great because there’s so many families and they need fun, educational things to do with their kids,” Weaver said.

This year, it took longer to hire instructors for Gallatin Valley YMCA than in previous years, Weaver said.

“Fortunately, I hired a handful of people recently. I was honestly worried we wouldn’t be able to open a site,” she said.

It was likely Weaver and site coordinators would still need to fill in for instructors on their days off.

Some camps, like MOSS and Equinox, haven’t experienced much of a challenge attracting staff.

Gitch said MOSS is able to pull from a well of past campers and word-of-mouth referrals from past instructors. The summer program has 21 instructors on staff, with about half of them coming from out of state.

“We had to be extra cognizant with housing prices. We worked really hard as a team to make sure people moving into town have a place to stay that’s affordable,” Gitch said. “We’re very aware of the cost of living and trying to do what we can to help people.”

Others, like Bozeman Parks and Recreation department, have increased pay for its summer positions to overcome staffing challenges.

“Staffing has certainly been a challenge over the last couple of years and has had an impact on what we can offer,” said Jamie Saitta, recreation manager for the Parks and Recreation department.

The city of Bozeman recently announced pay hikes from $15 to $21 an hour for some positions, including camp instructors. Some employees would also receive a $500 signing bonus.

The recreation division is now fully staffed for their summer camps, Saitta said, crediting the pay raise with making a difference.

“We’re fortunate in that we’ve not had to increase our fees. We keep our programs affordable so we can ensure access to all,” she said.

Nationally, the American Camp Association estimated that summer camp fees were set to increase 10% to 15% from the previous summer due to inflation, which last month stood at 8.3% compared to the previous year.

In Bozeman, almost all of the summer care providers said inflation would likely affect their overhead costs, including supplies and gas money. But they were committed to absorbing as much of it as possible and continuing to offer scholarships to ensure people had access to care.

Some programs, like Camp Equinox have noticed rising prices for materials like art supplies. Goodman said the camp raises its prices at a small, steady amount each year and she doesn’t anticipate needing to raise them any higher than originally planned.

The gas budget would need to be larger than planned for Gallatin Valley YMCA, which regularly transports camp-goers around Bozeman and the area, including Livingston, according to Weaver.

“I think we will probably have a harder time adhering to the budget in some ways based on inflation,” Weaver said, adding that they were committed to continuing the camps as originally scheduled.

Alpengirl, with a staff of 15, offers adventure camps for pre-teen and teenaged girls. It has trips planned for 180 campers ages 11 to 16 years old, coming from all over the country.

With increased demand this year compared to the previous summer, Farley said its waitlist ranges from a handful of campers to 15 for some trips.

At MOSS, Gitch said inflation has been on their minds but wasn’t something that was keeping them up at night.

“We have flexibility in our budget where we can plan for these maybe unforeseen circumstances. It’s definitely not stopping us from taking kiddos out to Yellowstone. It just means more grant writing for us,” Gitch said.

One symptom of the COVID-19 times that affected MOSS is the availability of 15-passenger vans. The organization has money in its budget to purchase a new van but has been unable to find one in stock. Instead, Gitch and a coworker traveled to Salt Lake City to pick up two rental vans — there are no rentals available near Bozeman.

For summer care providers who spoke to the Chronicle, the goal remains the same, to provide connections, creative inspiration, and fun for children. To help them enjoy the sweet effervescent summer, popsicle sticks and all.

“The environment, it’s fun and silly and playful and we all desperately need that, especially now. The connection is so vital,” Goodman said.

A winding road: As Bozeman continues planning for Fowler extension, some residents balk

A winding road: As Bozeman continues planning for Fowler extension, some residents balk