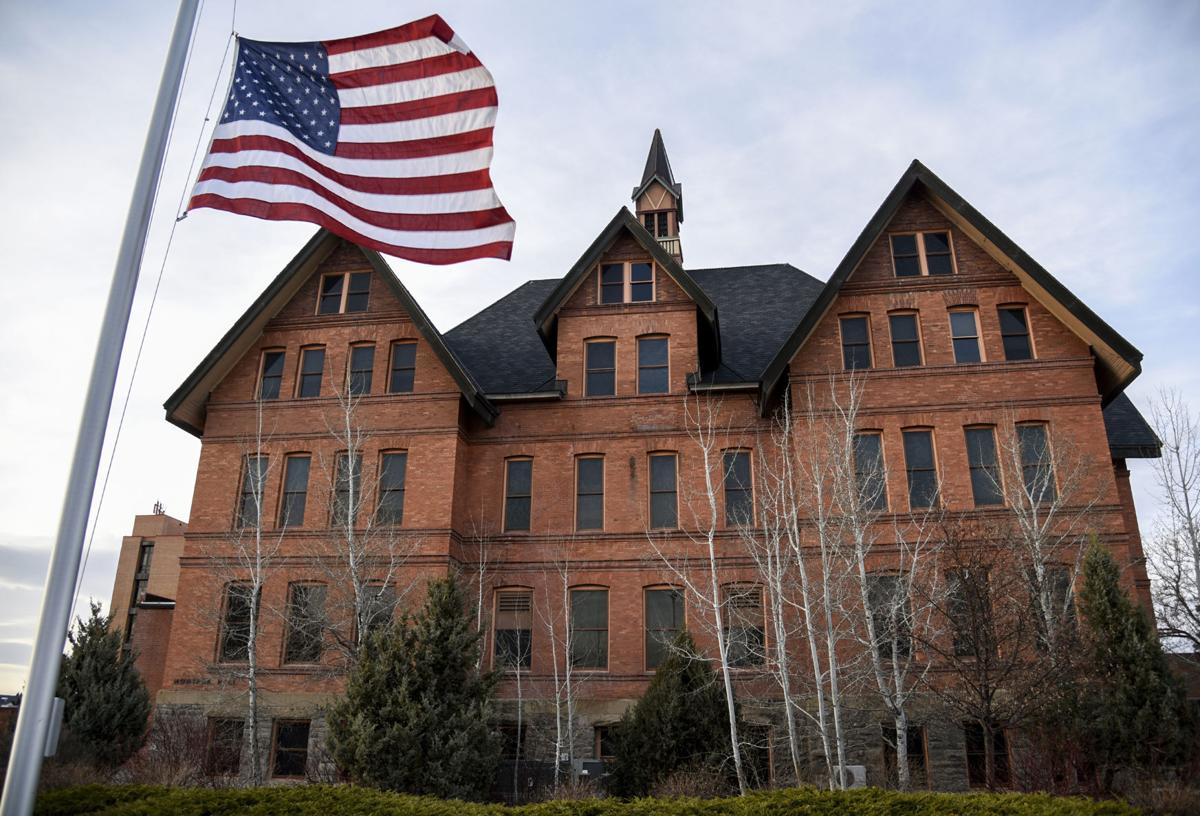 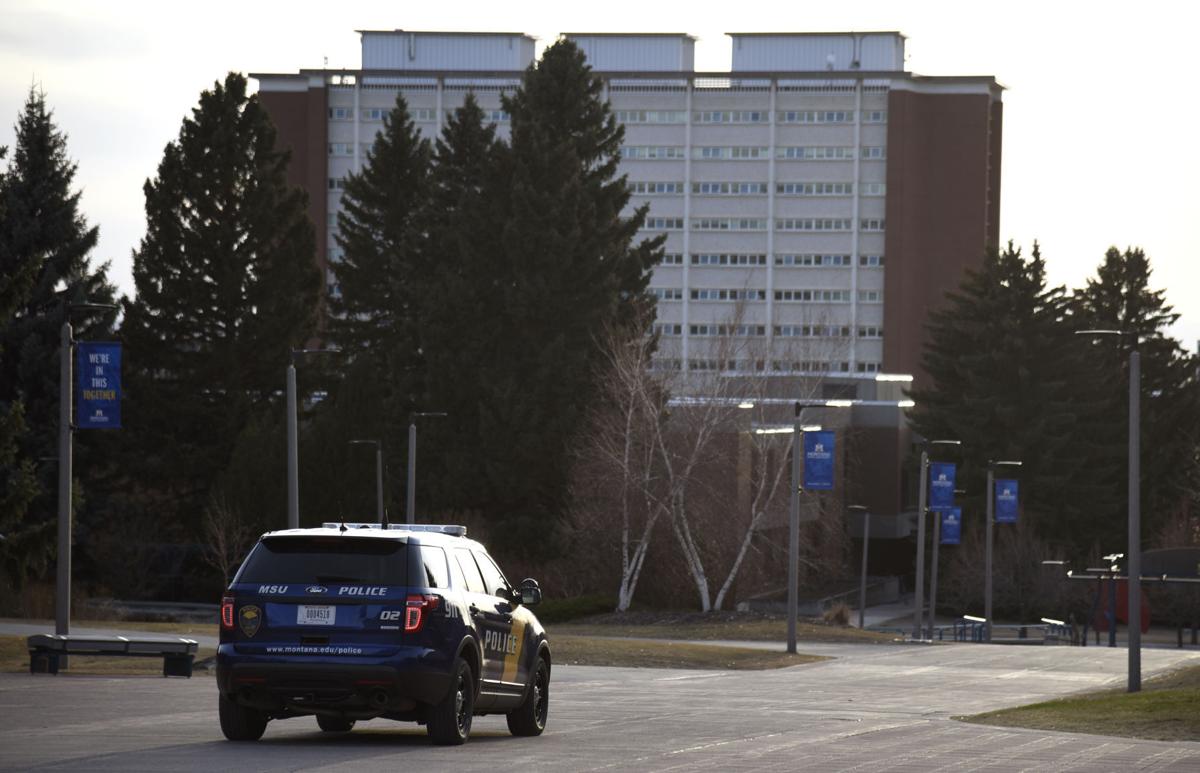 A Montana State University police officer drives through campus at sunset on April 2, 2021. 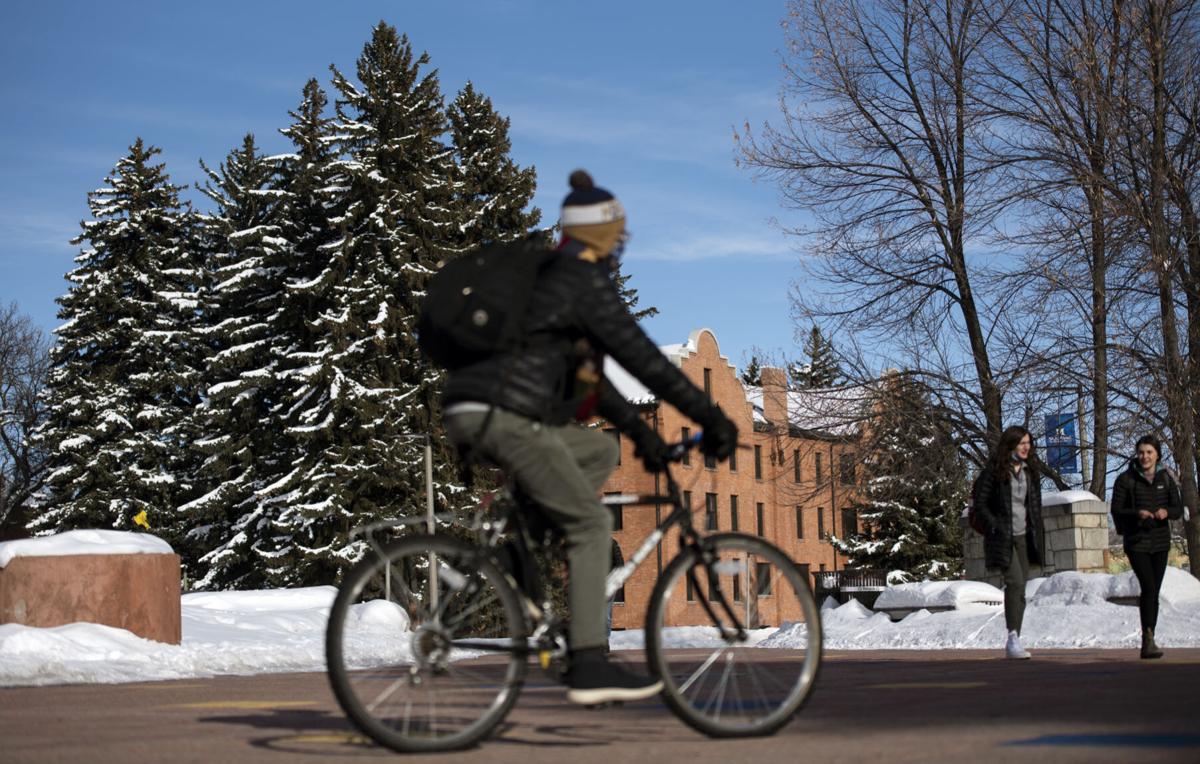 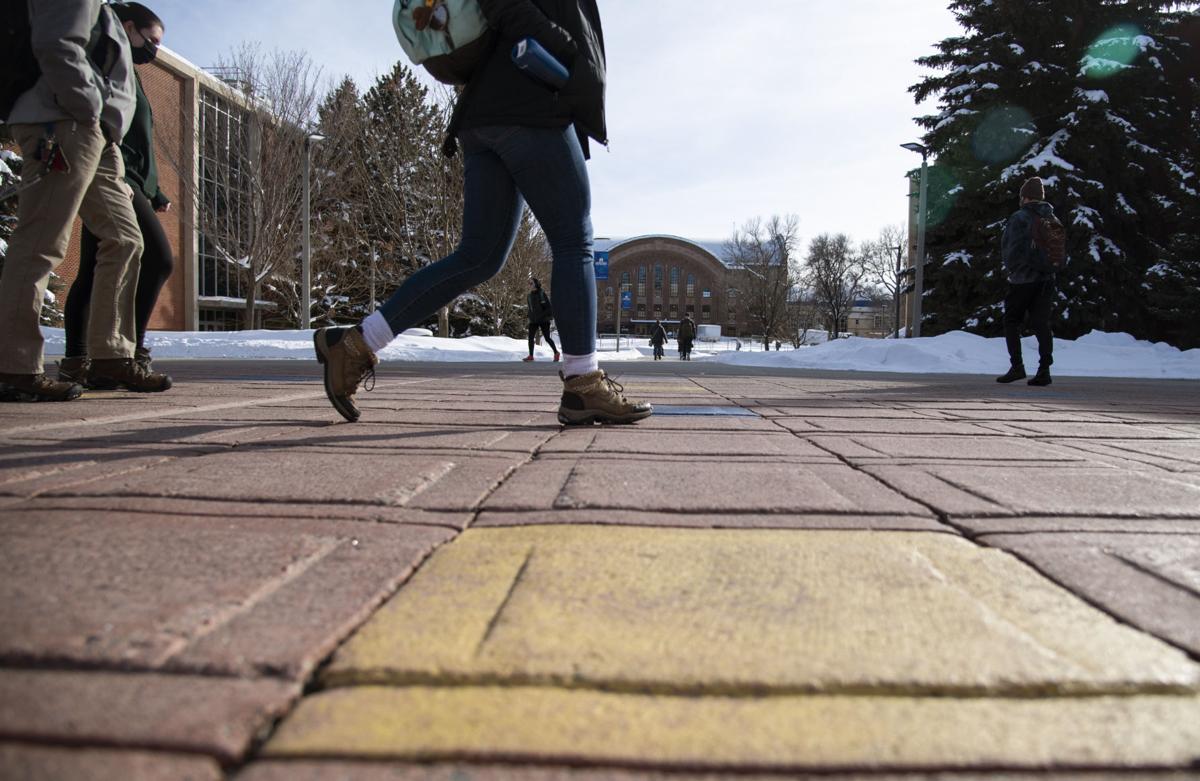 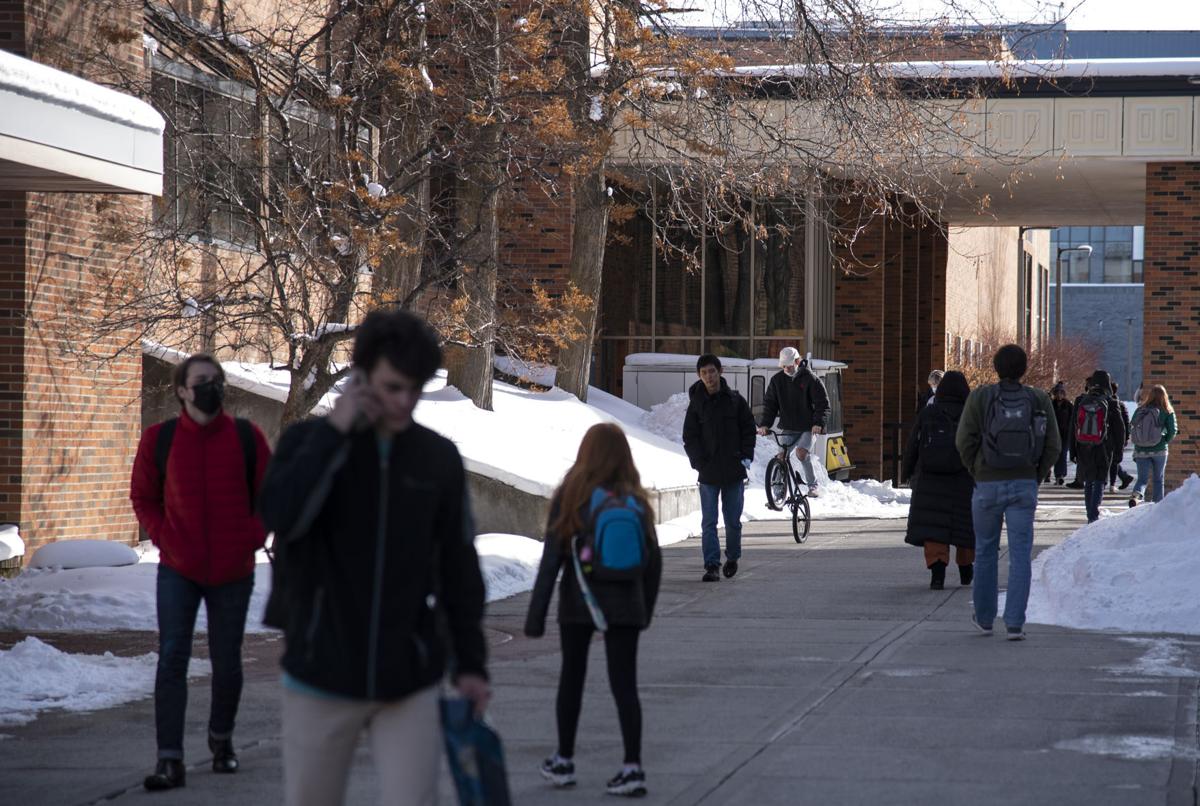 In an era marred by gun violence, the Montana University System is looking to neighboring states and public input as it prepares to allow concealed carry of firearms on campus.

The new firearm carry law, signed by Republican Gov. Greg Gianforte on Feb. 18, will go into effect on Montana’s campuses June 1, leaving the Office of the Commissioner of Higher Education with a narrow window to collect public input, draft a policy and present its findings to the Board of Regents during next month’s meeting.

It also limits the power of the Board of Regents to place restrictions on firearms on the university system’s campuses.

Supporters, like the National Rifle Association, the National Association for Gun Rights and the Montana Shooting Sports Association, have said the law would reduce restrictions that prevent responsible gun owners from carrying firearms to protect themselves and others. Republican Attorney General Austin Knudsen also endorsed the legislation.

Although OCHE and the regents initially opposed the bill, the board is expected to vote on a policy for the new law at its May 26-27 meeting.

Ahead of that meeting, the commissioner’s office is asking for public comment and feedback from students, faculty, staff and community members. People interested may submit written comment by email to oche@montana.edu.

Members of the Board of Regents and OCHE staff plan to host a live listening session May 12 from 3 to 5 p.m.

“We’re already getting a large amount of written commentary,” Tessman said. “... What that does is gives us two weeks to digest all of that feedback and insight and make final adjustments to draft an implementation policy.”

An issue of constitutionality

When House Bill 102 moved through the Senate and House, it prompted questions of constitutionality. In a legal note, the Legislative Services Division said the bill could “arise potential constitutional conformity issues” with the Montana Constitution, which says the Board of Regents shall “have full power, responsibility and authority to supervise, coordinate, manage and control the Montana university system.”

The board’s previous policy had been to ban firearms on campus except for those carried by law enforcement, while providing secure storage lockers for people to store their guns on campus.

Amanda Curtis, president of the Montana Federation of Public Employees, said the union’s members are “frustrated at the overreach of the legislature on the Board of Regents constitutional authority to govern” the university system. The MFPE represents state employees, including those in the university system.

The MFPE is encouraging the board to sue over House Bill 102, Curtis said — the organization will likely file an amicus brief in support of challenges to the law.

While Curtis said it would be ideal if the whole board challenged HB 102 in court, a lawsuit could also be brought by an individual regent. In 2019, then-Regent Martha Sheehy won a lawsuit against the Office of Political Practices.

When asked about the possibility of challenging the law in court, Tessman said the board of regents would ultimately be the one to make that decision. The opinion of an individual regent is just the opinion of one person and any decisions would be made as a whole board, he said.

“Our job in this office, until we hear otherwise, is to work on a policy,” Tessman said.

Part of OCHE’s process to draft a carry policy that is in line with the new law includes reviewing policies in states that have already implemented similar campus gun laws, including Idaho, Utah, Colorado, Kansas and Texas.

“We have some areas that we know are going to be tough puzzles to solve,” Tessman said.

One of those issues will be creating a policy for how the law will work in resident and campus life. The university system is looking at what kind of standards and protocols to put in place if students want to carry outside of their dorm and around campus with them, Tessman said.

“We’re trying to clearly communicate different types of events and spaces that might be exempted,” he said.

The university system will also need to outline enforcement and monitoring of its policy, including repercussions for not following the policy, how to verify the training of individuals carrying a weapon and the responsibility of faculty and staff to report violations.

In Idaho, a similar law was passed in 2014 allowing concealed carry on college campuses. People with a concealed-carry permit in Idaho can carry firearms on campus, except in public entertainment facilities and residence halls.

Teresa Snyder Borrenpohl, a volunteer with the Idaho chapter of Moms Demand Action, said at the time there were concerns over what additional guns would mean for Idaho campuses.

“It felt scary,” said Borrenpohl, who was an employee of Idaho’s university system at the time the campus carry policy was implemented.

“It just increases the amount of things you need to think of when planning an event or recruiting students,” said Borrenpohl, who lived in Bozeman before moving to Idaho. “It’s something we have to constantly be prepared for.”

In Montana, Curtis said there are still a lot of unanswered questions for staff and faculty. With teaching faculty able to ban recording devices or food in class through a syllabus, she said many wonder if faculty-specific bans can extend to firearms.

“Our members who teach have questions about whether or not they can ban a firearm from their class just as they can a cup of coffee,” she said.

Montana Federation of Public Employees members have also raised concerns about a need for bulletproof glass for front facing offices and other safety measures, Curtis said.

“Members are provided with all kinds of tools to do their jobs like chairs and tables and desks, and if HB 102 is going to now require new office supplies to be able to have a safe learning environment, our members will be requesting those from their employers,” Curtis said.

With changes to campus likely to include additional staffing and safety equipment, the new law comes with a price tag. To help cover that cost, the Montana Legislature is on track to pass an additional $1 million in funding for the “full implementation of open and concealed firearms” on campuses.

“At this point, we really can’t put anything too specific of a cost,” Tessman said. “We don’t know whether that $1 million would be too little or too much.”

The university system didn’t have specifics on what the costs would be to implement the law but Tessman said it was likely to include metal detectors and other security infrastructure, communications both digitally and on air to educate students and staff of the changes, signage for campuses and technology needs.

He also said the new policy would be “a significant change” in the campus culture and the university system would want to address that shift for students, staff and faculty, which would likely have additional costs associated with it.

When Idaho implemented its campus carry law, the university system estimated it would cost $3.7 million in security precautions and additional costs.

Borrenpohl said the university system spent money on policing, security, metal detectors and messaging to students, employees and community members about where guns are allowed or prohibited.

A lot of people think about funneling additional funding to meet increased security needs when more guns are accessible but it’s also important to expand mental health services, she said.

“There has to be a massive investment in resources on campus that if students find themselves in a moment of crisis, they know where to go and those departments are accurately resourced,” Borrenpohl said. “… We need to have more protections but we also need to have more mental health support.”

In 2019, Montana had the third highest suicide rate in the nation, with firearms accounting for 60% of the means of suicide, according to the Montana Department of Public Health and Human Services. Over the past decade, suicide is the number two cause of death for youth aged 15-24, according to the DPHHS.

In its 2019 report on suicides in Montana, the DPHHS found nearly 90% of all firearm deaths in Montana are suicides.

Opponents to the law have raised concerns that easier access to guns during a challenging time for students struggling with mental health challenges could increase suicides.

Shannon Thomas, a school teacher in Helena who opposes the law, said she wished other solutions had been looked at more closely in the Legislature, like safe storage options, especially with suicide rates a concern across the state.

As tragic as mass shootings are, Thomas said those incidents of gun violence account for less than 1% in Montana, adding, “most of the gun violence in the state is gun suicide violence.

Tessman said the OCHE team drafting the policy would be looking for input from mental health practitioners and staff members at its campuses.

“That discussion around suicide prevention is front and center …. It’s been one of our most significant concerns,” Tessman said.

Two months after Idaho implemented its campus carry policy, an Idaho State University professor with a concealed carry permit shot himself in the foot during a class when his firearm discharged.

“It could have done a lot of damage,” Borrenpohl said.