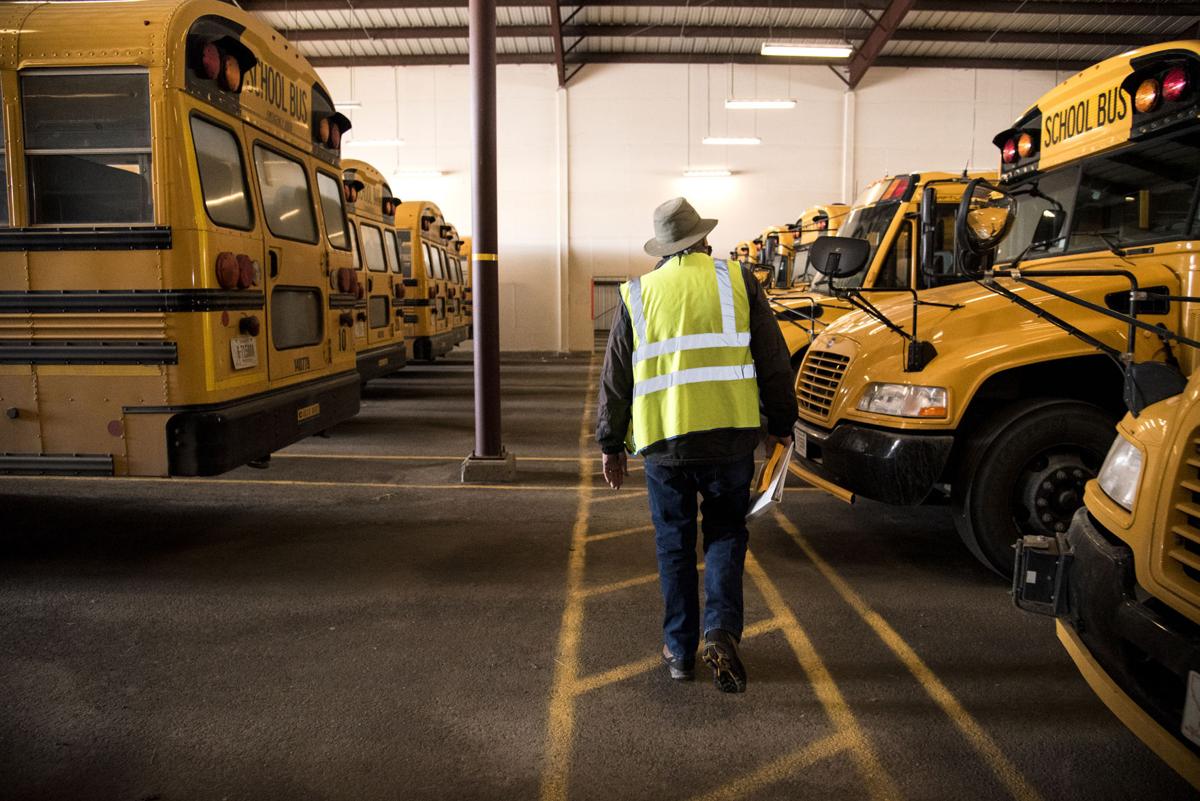 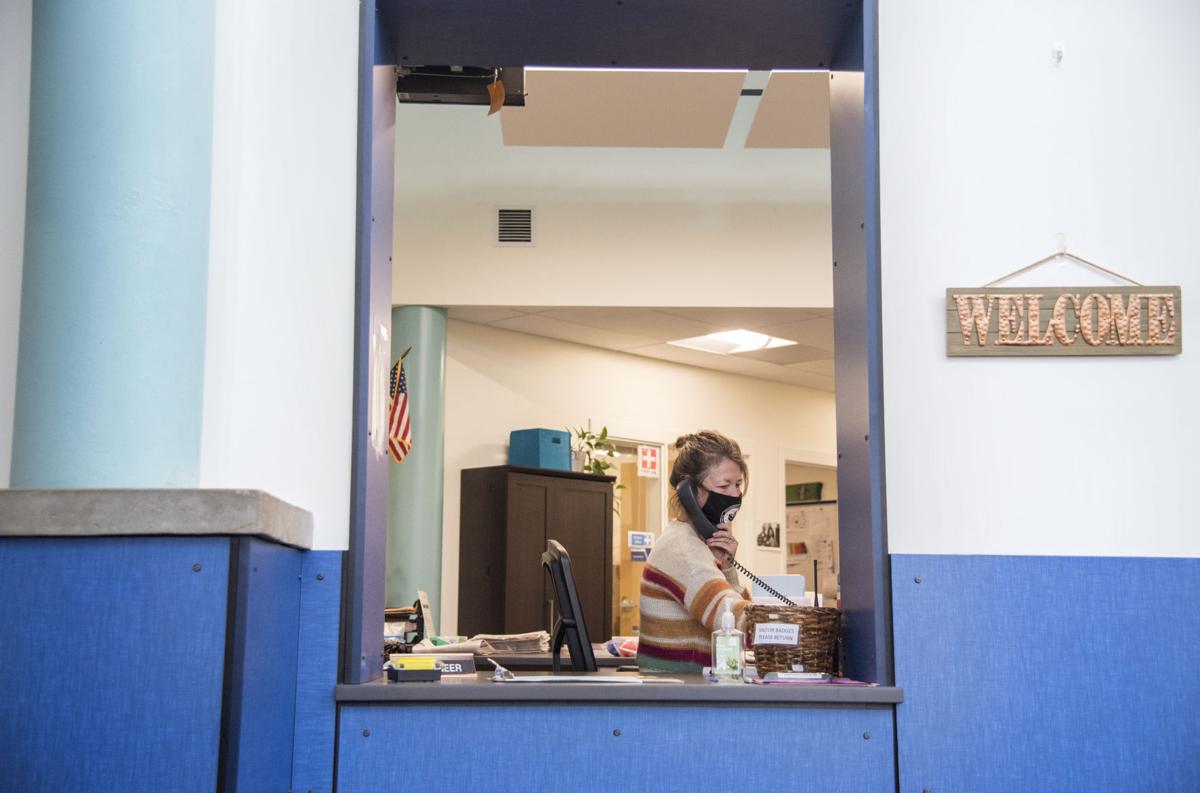 Receptionist Lisa Tesseneer answers a phone call at the front desk of Sacajawea Middle School on Jan 12, 2021. Tesseneer has been working for the school for nine years total, two years in the cafeteria and seven years as a receptionist. 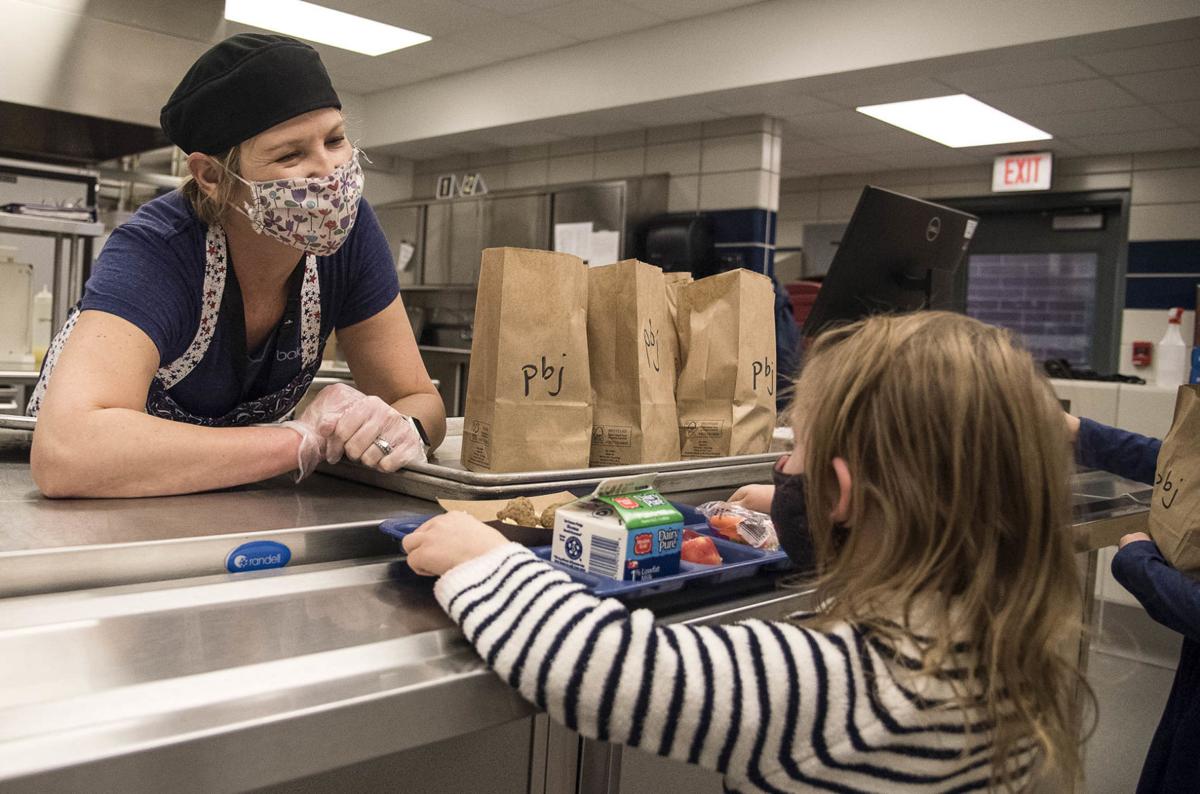 Chef Kirsten Emborg puts out a new tray of peanut butter and jelly sandwiches during second and third grade lunch on Jan. 13, 2021, at Meadowlark Elementary School. Meadowlark is one of the few schools in the district serving hot lunches right now. Most other schools only serve cold sack lunches that kids eat in their classrooms. 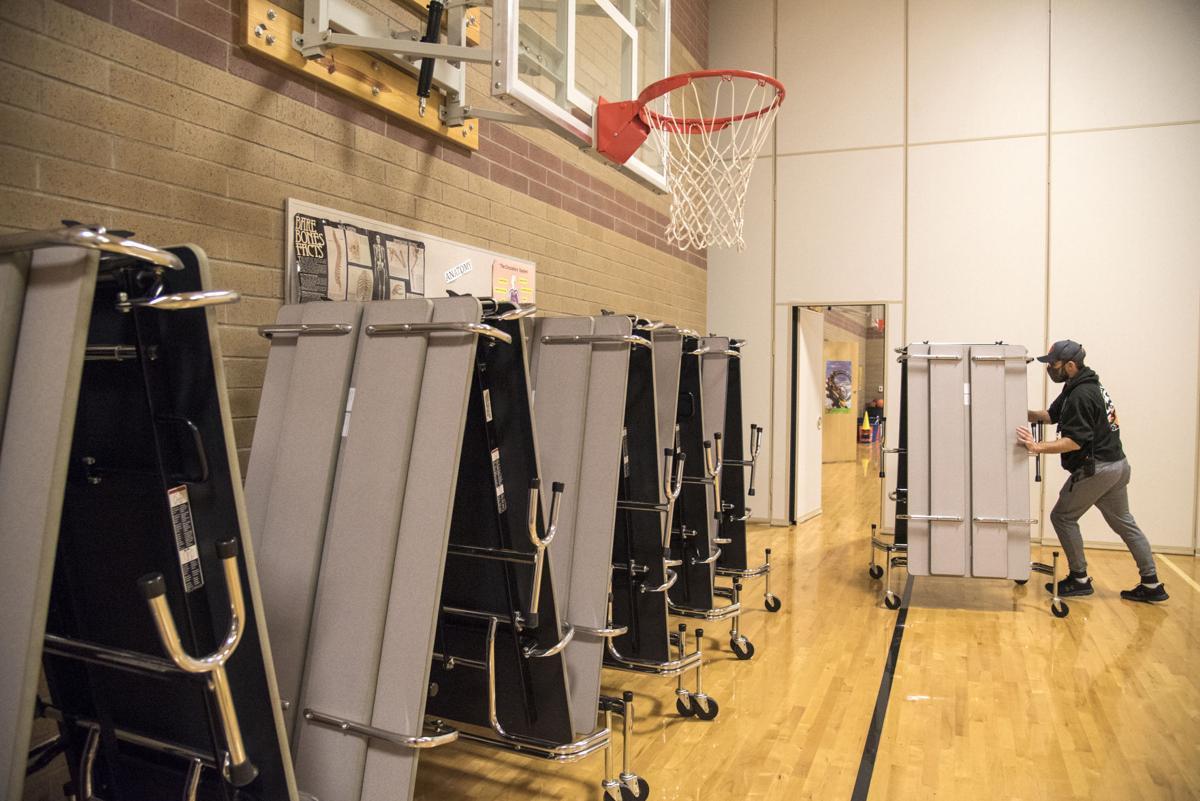 Head Custodian Jeremy Ward puts up the tables after the last group of students have finished eating in the gym-turned-cafeteria on Jan. 13, 2021, at Meadowlark Elementary School. Meadowlark staff have had to get creative in finding spaces for each class cohort to eat lunch before returning to their respective classrooms. 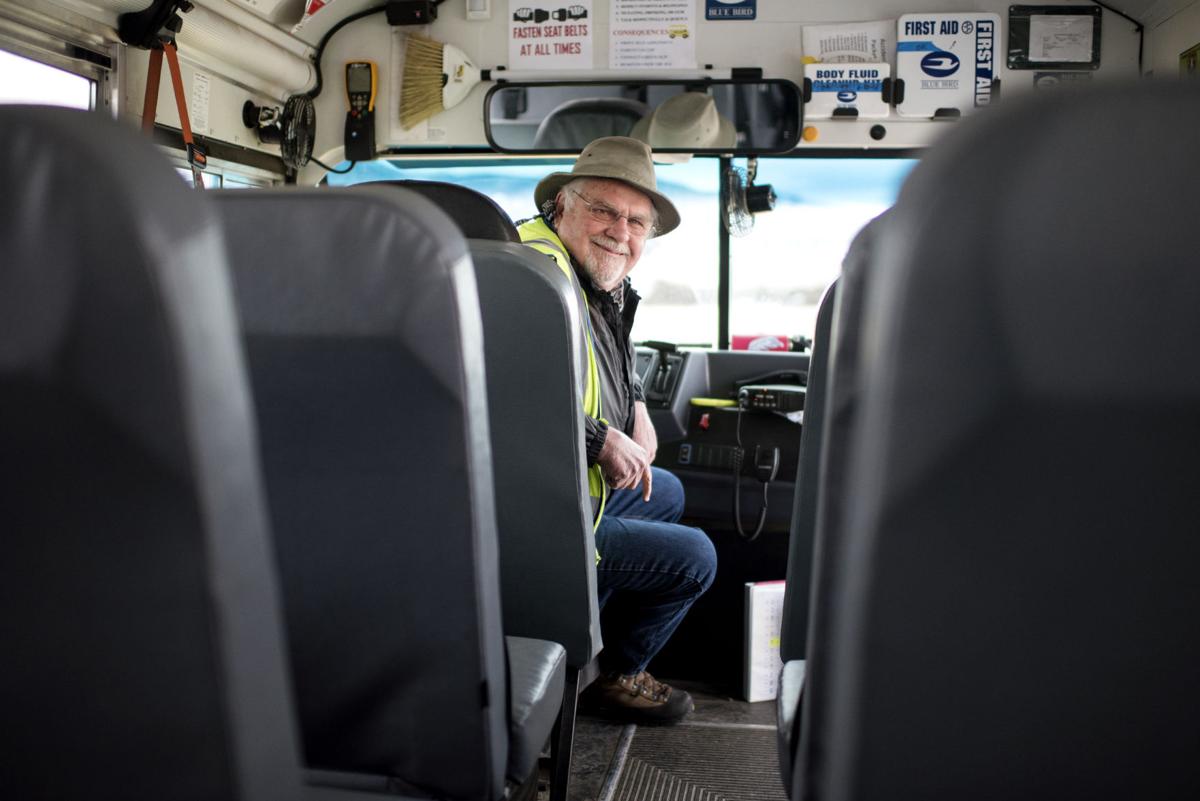 Bus Driver Bob Bullock sits inside the school bus he drives for First Student on Friday, Jan. 15, 2021. Bullock has been driving the same route for nine years and watched many of his riders grow up. "Some kids have never had another driver," he said.

It is early morning when Bob Bullock arrives to work, when the world around him is still dark and quiet. As he clocks in, he answers COVID-19 screening questions on the computer. Does he have a fever? Has he had other symptoms of the virus?

After answering in the negative, he picks up the keys and any extra masks he might need for the First Student school bus he has driven for nine years.

The last year has presented challenges in almost every facet of life, perhaps no more so than in education. There are differing opinions, safety precautions for in-person learning, mental health challenges, staff shortages and fear for personal and family safety.

But people who work within the Bozeman School District like Bullock, say the essence of their jobs remain the same: forming an ecosystem of support to ensure students have access to an education.

“It’s a very small part I play in getting kids educated but the secret to getting things to work is everyone doing a little bit,” he said. “And in my own little way, I’m keeping them safe.”

“They’re doing a good job of keeping the mask on,” he said.

Bullock, whose wife has a compromised immune system, said First Student has increased the number of times its buses are sanitized and there is more space to socially distance with less students riding.

He said when the middle and high schools increase their in-person days in a few weeks, it will likely increase the number of students on the buses. He anticipates social distancing on the bus will be harder to implement.

“There is a scheduling consideration to get the kids there on time. If you’re spending a lot of time moving kids around and having to do a seating chart, it’ll get a bit unwieldy,” he said. “It’s not bad now but I expect it will get a little more difficult at the end of the month.”

When students arrive to school by buses and cars and their own two feet, they are greeted by someone like Lisa Tesseneer, secretary at Sacajawea Middle School. As the secretary at the front desk, Tesseneer is one of the first people students see in the morning.

Although there’s now a screen protector in front of her window, hand sanitizer throughout the office and extra masks for students who might need them, her job remains the same, she said.

Students come to the front desk a majority of the time because they need help. Her favorite part of her job is to be able to put them at ease, she said.

“It’s definitely a time of tension so if we can offer a safe place at school than it’s a good thing,” she said.

Tesseneer said interacting with the students has been different due to the masks. There’s no longer the familiarity of knowing who they are. When they check in late, she often has to ask their names, she said.

As questions and needs arise throughout the day, there are people like Tesseneer and Kylie Sigrist, executive secretary at Bozeman High School, who have an almost endless supply of Band-Aids, sticks of gum, patience and a smile.

Sigrist, who started a year ago, said a lot of her job is acting as a liaison between parents and the school.

“It’s been hard because most of the things people ask, I don’t have a good answer for,” she said. “… There aren’t a lot of answers so if I can give any kind of help, it makes for a good day.”

Sigrist said things did become clearer after the school board meeting on Jan. 11, when the members voted to increase in-person learning for middle and high schools. A lot of parent questions have focused on what’s next and what the options are for their children, she said.

“There’s a lot of loose ends I wish I could tie up for people,” Sigrist said.

“A lot of the secretaries are new this year and it’s been quite hard to adjust to everything,” Sigrist said. “It’s really just shown everyone is on the same page. We all want the best for the students.”

Working in the front office, Sigrist said, she gets to see how hard it is for students, parents and teachers.

“It might not be the largest thing, but we are trying our very best to make things as smooth as possible,” she said.

Around the time students settle into their classes in mid-morning, school kitchens across the district are preparing to feed hundreds of students.

Brittany Selvig, the district’s support services supervisor, said each school administration has made decisions on how best to serve their students food. Some schools, like Gallatin High, are doing hot lunches while others are sending packaged meals like sandwiches to classrooms for students.

One commonality is that all school lunches are free through an extension of the federal Summer Food Service Program, which allows anyone 18 years of age and under to eat for free. Selvig said the program has been extended through the end of the school year.

Donna Jackson, who launched a new kitchen operation with the opening of Gallatin High School, said due to the blended model it was a slower start, which allowed her and her staff to work out any kinks.

Jackson said some of her older employees decided not to return to work because they were worried about their health and safety during the pandemic.

The pace will also pick up for the cafeterias when schools increase in-person learning. Johnson said in the blended model Gallatin High sees just over 400 students per day for lunch but that is likely to increase to over 900 students.

Selvig said staffing could be a challenge with the increase.

“We had a natural reduction in staffing, which worked out perfectly because we needed less staff at the time,” she said. “But as we go back to normal we’ll need more staffing.”

She said having the schools gradually transition back to more in-person learning has helped, and they’ve been able to slowly transition their staffing back to normal levels.

Throughout the day, there are people like Tom Johnson, head custodian at Sacajawea Middle School, doing extra cleaning rounds and inspecting the additional sanitation units installed in each school.

The day shift custodians arrive around 6 a.m. to make sure the kids get to the school safely and the parking lot is plowed, he said. There’s additional work during the day. On top of their regular duties, custodians are doing extra sanitizing and deep-cleaning.

“We have to set up the school for safety,” Johnson said. “… My staff is working extra hard to make sure it’s safe. It’s hard.”

When the students return for five days of in-person learning, Johnson said the custodians will be ready. The job vacancies the district experienced earlier in the school year have been filling fast, he said.

After students have returned home and teachers have wrapped up their prep work, the schools go quiet, except for a small group of people who roam the halls.

The custodians on the night shift move through the buildings cleaning and sanitizing classrooms, hallways, bathrooms and other high-touch surfaces. It’s their job to ensure the school is clean and ready for the return of students the next day, Johnson said.

He said it’s the whole system of people that makes the district work, not just the custodians.

“The district task force, they’re watching the numbers and they’re doing their job. And we’re doing ours. If one of those things is not going right, it’s not going to work,” he said.

It’s not a perfect system. An ecosystem involving humans rarely is. But those who spoke to the Chronicle said each person does their part to make it spin a little better.

There are days cafeterias are short staffed, the questions at the front desk seem unanswerable, technology causes classroom disruptions, the sanitation and custodial needs are endless, and tempers are frayed in a system that has been put under the pressure of a global pandemic.

But then a new day stretches up from the night, soft and quiet.

Bullock pulls into the First Student lot. Answers questions on the computer. Grabs his bus keys. And heads out to pick up his students because, as he said, the kids are what have kept him coming back the last nine years.

“The very small role I have, in accepting a bit of risk to make sure kids can get in and get the education they need, when we’re all willing to accept a bit of that risk, it makes things better,” Bullock said.