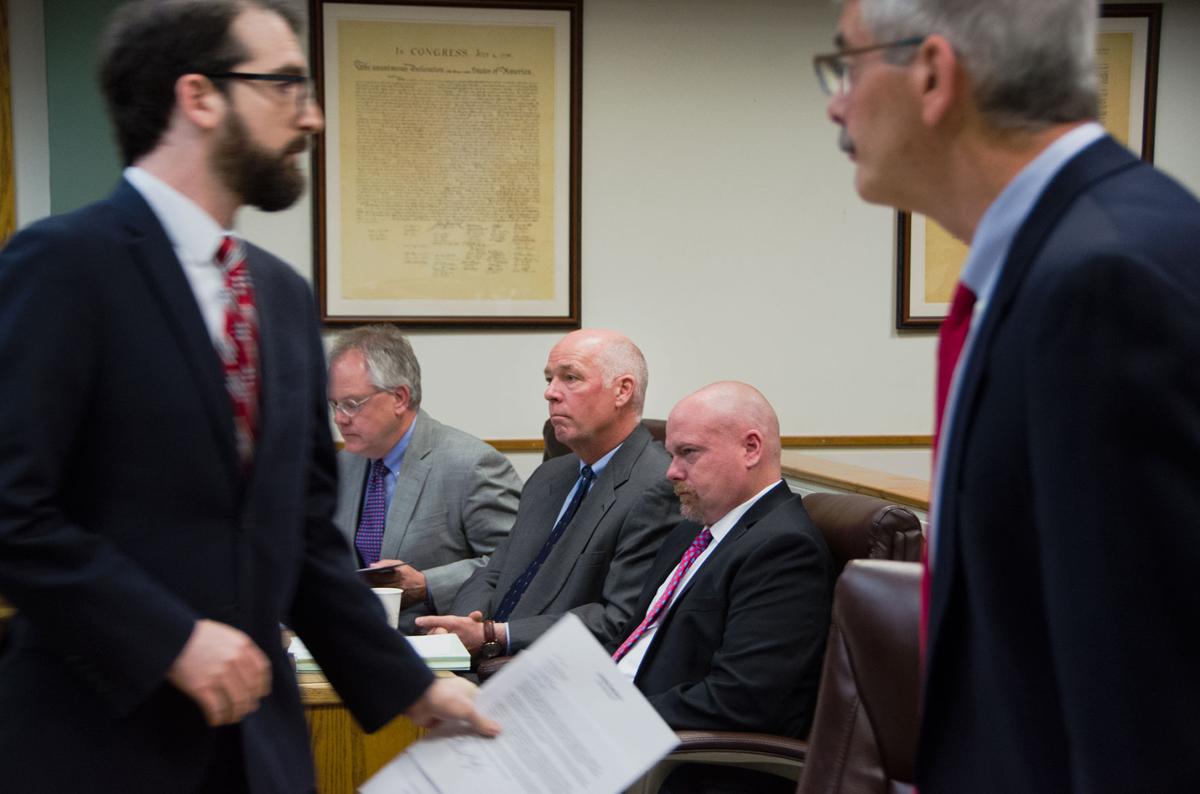 Ben Jacobs, left, returns to his seat on June 20 after providing a statement to the court. Jacobs is the reporter Congressman Greg Gianforte assaulted on the eve of Montana's special election in May. 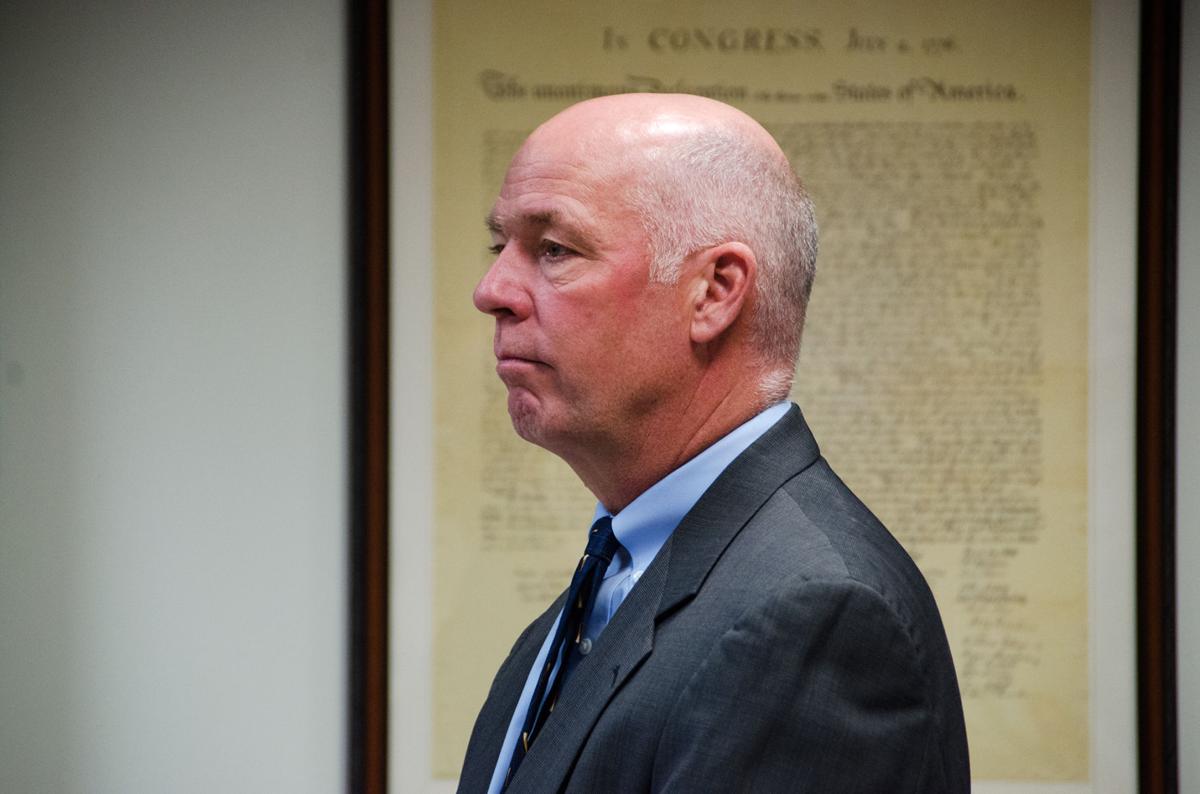 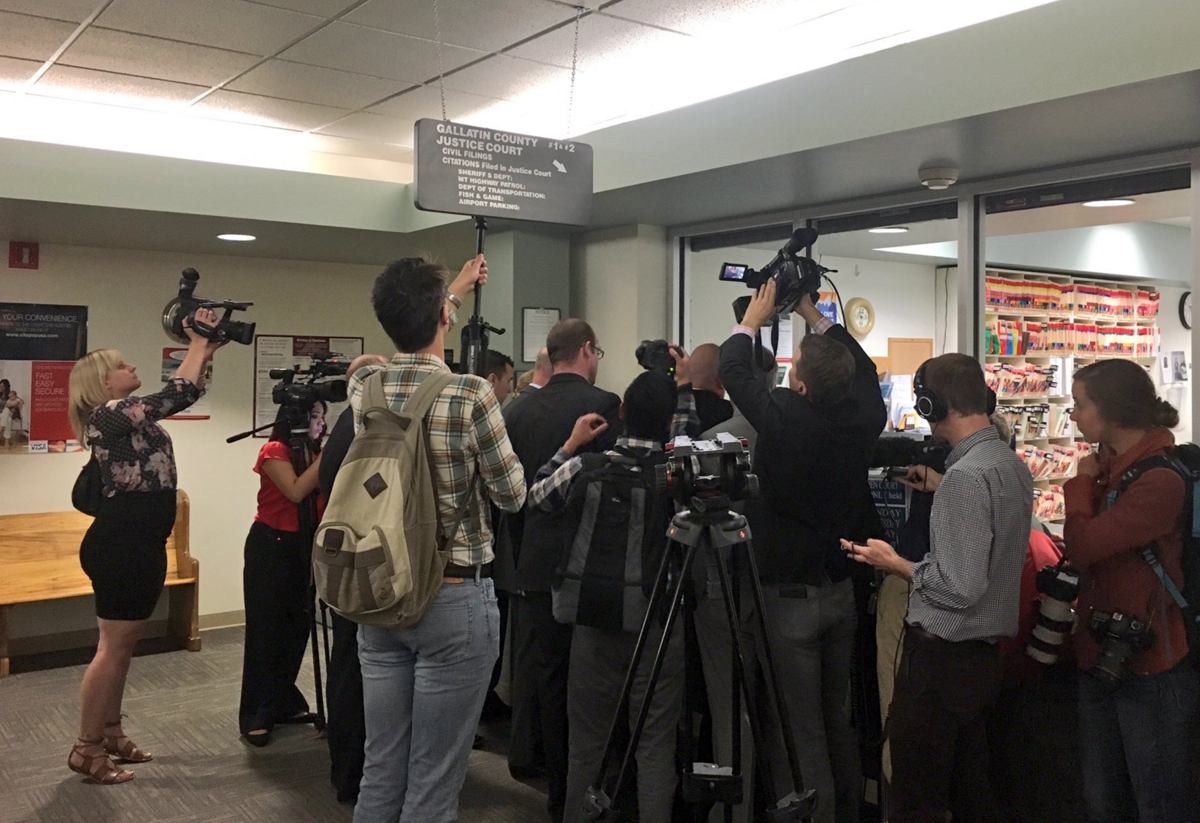 Congressman-elect Greg Gianforte signs paperwork at the front desk of Gallatin County Justice Court on June 12, 2017, after being sentenced for the May 24 assault of a reporter. 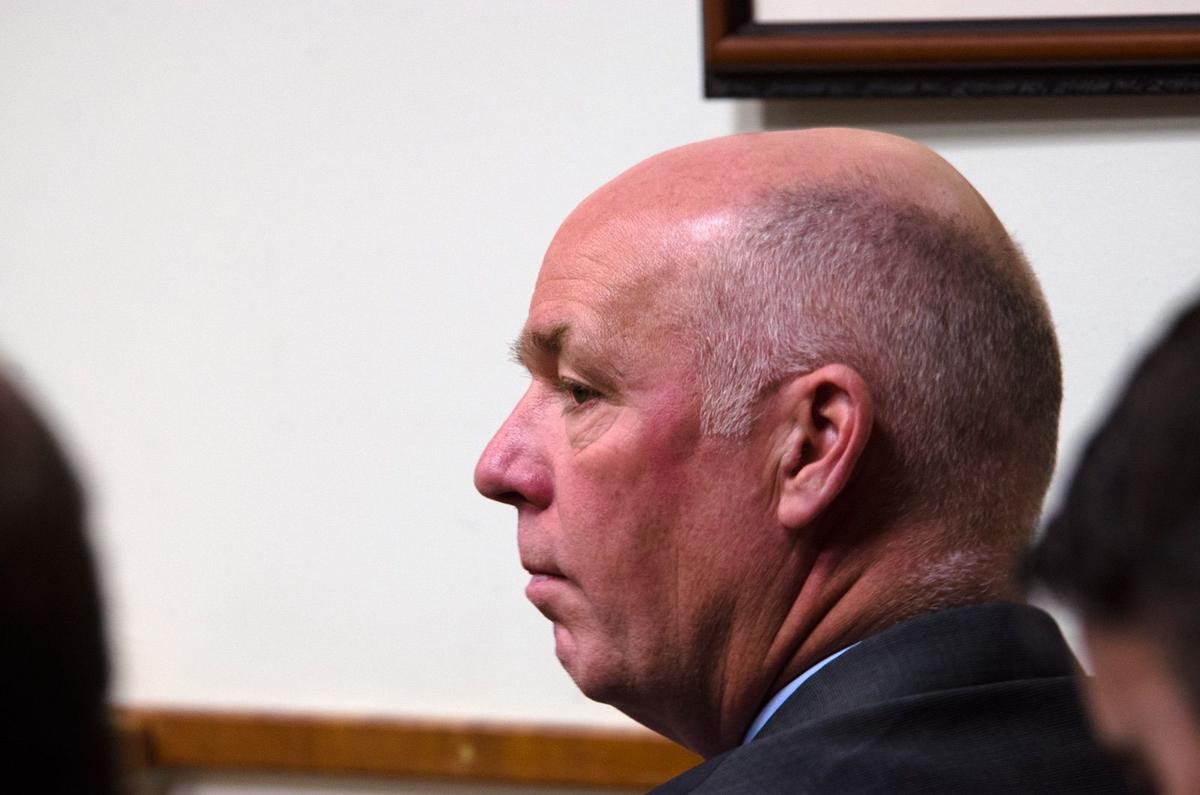 In this file photo, Congressman Greg Gianforte waits for his hearing to begin in Gallatin County Justice Court on a misdemeanor assault charge on June 12, 2017. 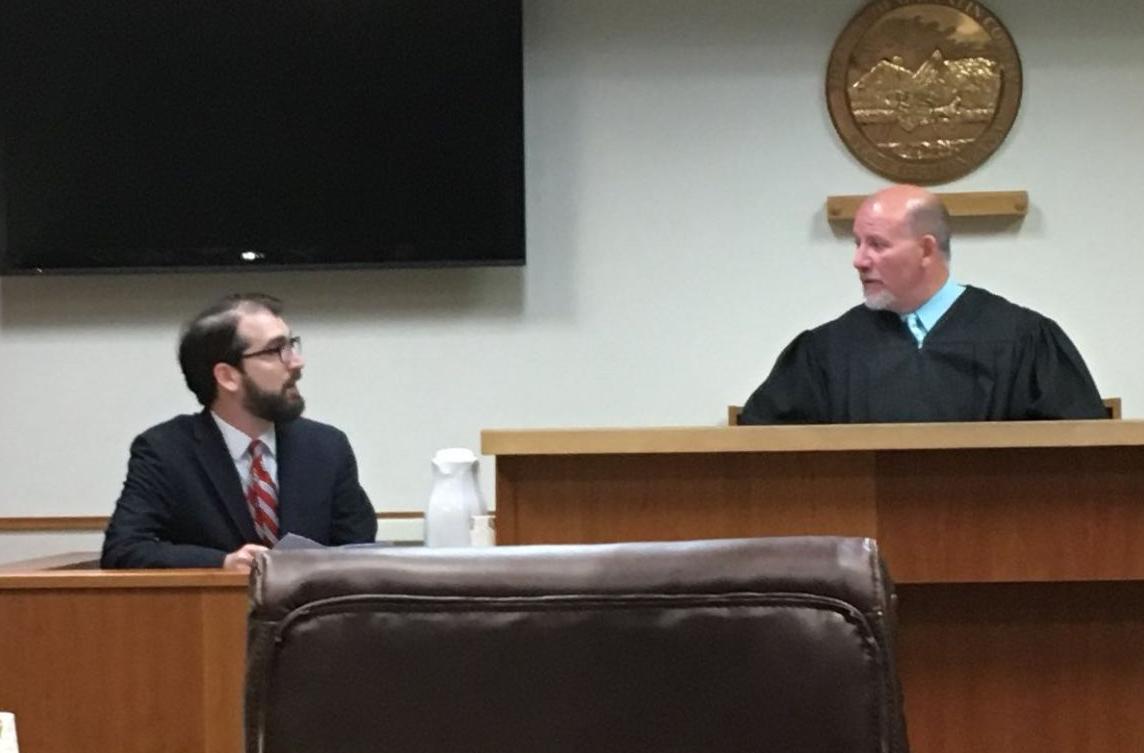 Guardian reporter Ben Jacobs, the victim of an assault by Congressman-elect Greg Gianforte, testifies at a hearing before Judge Rick West in Gallatin County Justice Court on June 12, 2017.

Ben Jacobs, left, returns to his seat on June 20 after providing a statement to the court. Jacobs is the reporter Congressman Greg Gianforte assaulted on the eve of Montana's special election in May.

Congressman-elect Greg Gianforte signs paperwork at the front desk of Gallatin County Justice Court on June 12, 2017, after being sentenced for the May 24 assault of a reporter.

In this file photo, Congressman Greg Gianforte waits for his hearing to begin in Gallatin County Justice Court on a misdemeanor assault charge on June 12, 2017.

Guardian reporter Ben Jacobs, the victim of an assault by Congressman-elect Greg Gianforte, testifies at a hearing before Judge Rick West in Gallatin County Justice Court on June 12, 2017.

Congressman-elect Greg Gianforte was ordered to complete 40 hours of community service and 20 hours of anger management classes after pleading guilty Monday for assaulting a reporter on the eve of Montana’s special election last month.

Gianforte appeared in Gallatin County Justice Court, where he pleaded guilty to misdemeanor assault. Gianforte was cited on May 24 after Guardian newspaper reporter Ben Jacobs reported that the then-congressional candidate had “body slammed” him at the Republican’s campaign headquarters.

“I grabbed his wrist. A scuffle ensued and he was injured, as I understand it,” Gianforte told Judge Rick West during a hearing packed with more than a dozen reporters and photographers. “It was not my intention to hurt him.”

Calling Gianforte’s actions “totally unacceptable,” West gave Gianforte a six-month deferred sentence and ordered the community service and the anger management, as well as $385 in court fees and fines.

If Gianforte doesn’t violate the conditions of his deferred sentence, his attorneys can move to have the charge dismissed after six months. He must complete his community service by Nov. 28.

One of Gianforte’s defense attorneys, former U.S. attorney for Montana Bill Mercer, said Gianforte had also paid Jacobs $4,464.97 in restitution as part of the criminal charge.

Quietly reading from a written statement, Jacobs took the witness stand and described the incident, saying it all began with his attempt to ask Gianforte about the Congressional Budget Office’s cost estimate for the Republican health care bill.

“I have asked questions of hundreds of politicians: congressmen, senators and even the man who is now our president,” Jacobs said. “Mr. Gianforte’s response was to slam me to the floor and start punching me.”

In addition to injuring Jacobs’ elbow and breaking his glasses, Gianforte’s actions “thrust me into a national spotlight I did not seek or desire,” Jacobs said.

However, following a settlement of any potential civil claims, Gianforte publicly apologized to Jacobs, saying he had no right to assault the reporter and said he would be donating $50,000 to a journalism nonprofit organization.

“I have accepted his apology and fully expect his thoughtful words to be followed by concrete actions once he has taken his seat in Congress,” Jacobs said. “I even hope to be able to finally interview him once he has arrived on Capitol Hill.”

Gianforte again apologized to Jacobs in a brief statement during the hearing.

“When you’re ready, I look forward to sitting down with you,” Gianforte said, turning to face Jacobs who was sitting in the front row of the courtroom’s gallery.

“I look forward to it,” Jacobs replied.

West’s sentence differed slightly from that recommended by Gallatin County Attorney Marty Lambert, who prosecuted the case. Lambert, while requesting the six-month deferred sentence, asked for $585 in fines and no community service or anger management.

Lambert mentioned the awkward position the assault made for Jacobs, a professional reporter who was unable to do his job.

“He was the story,” Lambert said.

And the “fiction” put out by Gianforte’s campaign immediately following the assault was also tough on Jacobs, Lambert said.

But Lambert noted that Gianforte, a tech entrepreneur who founded RightNow Technologies in Bozeman, was a “tremendously successful” businessman and philanthropist.

“The people of Montana will benefit for many, many years from his generosity,” Lambert said.

The sheriff’s office was correct in opting for a misdemeanor citation rather than a felony, Lambert said. And Gianforte took full responsibility for his actions, opting to plead guilty rather than no contest, Lambert said.

“He took it head on. He didn’t duck and weave,” Lambert said. And because of Gianforte’s “honesty and his forthrightness,” Lambert said Montanans “may put all of this behind us and move forward.”

West also praised Gianforte for his philanthropic efforts, but said that the “unprovoked attack” on Jacobs deserved a stiffer penalty than what was being recommended.

Initially, West said he was giving Gianforte, in addition to the six months deferred, a four-day jail sentence and making him eligible for the Gallatin County inmate work program, an alternative to jail that allows inmates to work in lieu of jail time. Gianforte would have had to work two days and spend none of the four days in jail.

However, after conferring with attorneys and the Gallatin County Sheriff’s Office during the hearing, West had to change course.

The work program is only eligible for inmates convicted of non-violent offenses, and misdemeanor assault convicts are unable to participate in the work program.

So West changed course and opted for the 40 hours of community service and 20 hours of anger management.

“This is not my intent that you spend four days in jail. I don’t think that will serve the community or the taxpayers,” West said.

Gallatin County Court Services, which oversees community service hours, has about 60 nonprofit and governmental organizations that misdemeanor convicts provide service for in the area.

Participants sign a contract and work with organizers to find a program best suited for them. It is ultimately up to the participants to arrange work and organizations must sign off on the hours worked.

Lambert said the sentence was “just,” noting that each case comes with its own set of individual circumstances, from the crime itself to the defendant and their criminal history to that of the victim and their input.

“I don’t think Mr. Gianforte had to go to jail to reinforce the need for him not to engage in that type of behavior again,” Lambert said. “I think that sentence was fair.”

West also ordered that Gianforte report to the jail to provide booking information, including a mug shot and fingerprints. But defense attorneys objected, saying they will file a motion asking that Gianforte be allowed to avoid that.

Gianforte has not addressed the false statement his campaign gave following the assault. He briefly spoke with reporters after his court appearance but only took a few questions, none of which challenged him on his campaign’s statement.

Lambert said he would not be seeking any criminal charges against anyone else in Gianforte’s campaign based on the false statement.

The day after the assault, Gianforte was elected to represent Montana in the U.S. House. It’s expected that he will be sworn into office in the coming weeks.

The statement read by Guardian reporter Ben Jacobs in Gallatin County Justice Court on June 12, 2017, at the sentencing for Greg Gianforte.

Most Montanans had voted before Gianforte incident with reporter