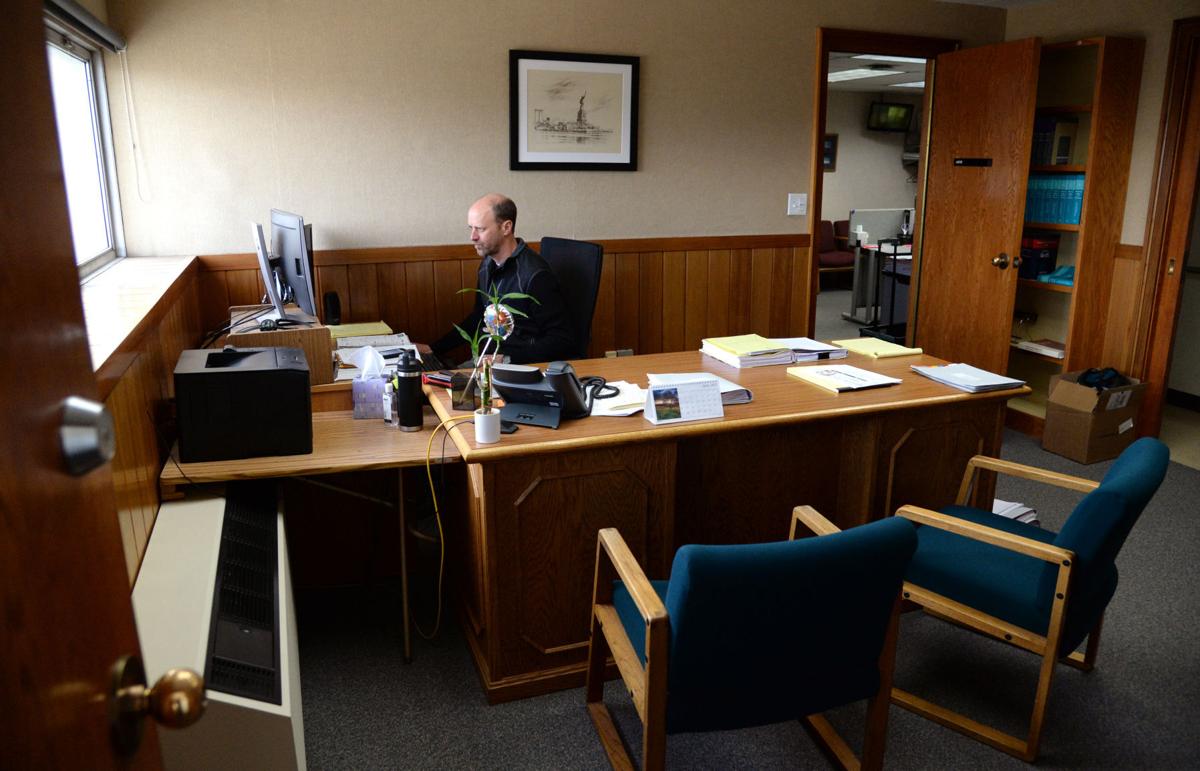 District Court Judge Peter Ohman comes into the office to get some work done on Sunday, April 18, 2021, at the Law and Justice Center. Ohman says he has worked every weekend except two since he started in October 2020. But he said there are "many of us who do that, attorneys and judges." In fact, Ohman pointed out District Court Judge Rienne McElyea's car in the otherwise empty parking lot on Sunday at the Law and Justice Center. 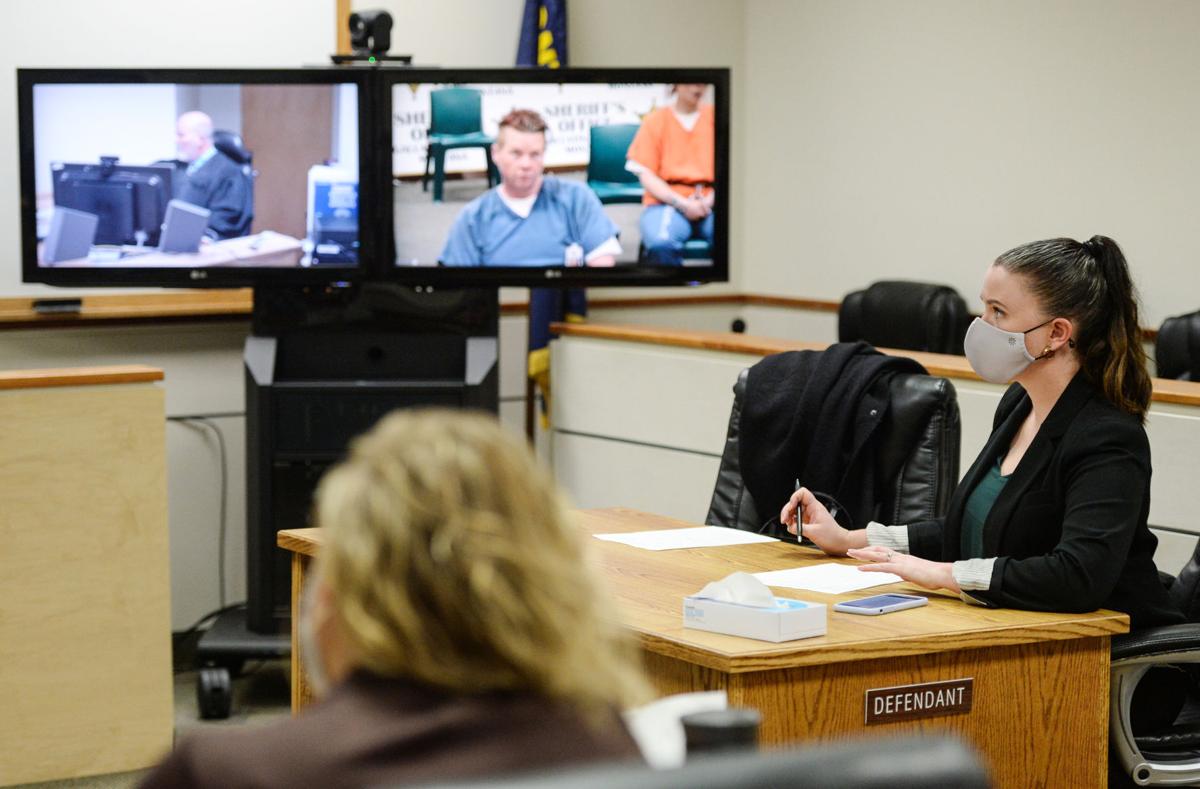 Public Defender Clare Mack takes notes during a in-custody hearing in justice court on April 15, 2021, at the Law and Justice Center. 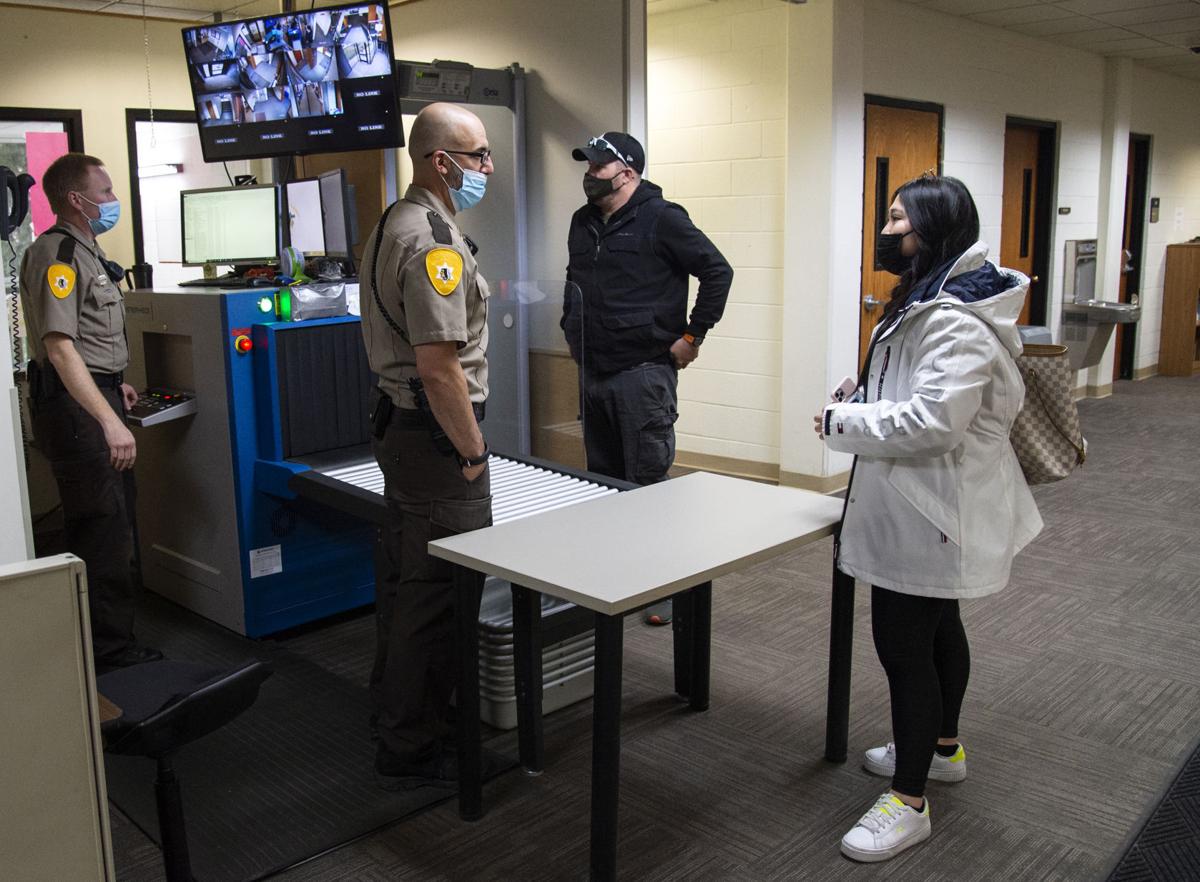 Officers Austin Greydanus and Eric Veca help visitors pass through the security checkpoint on April 15, 2021, at the Law and Justice Center. 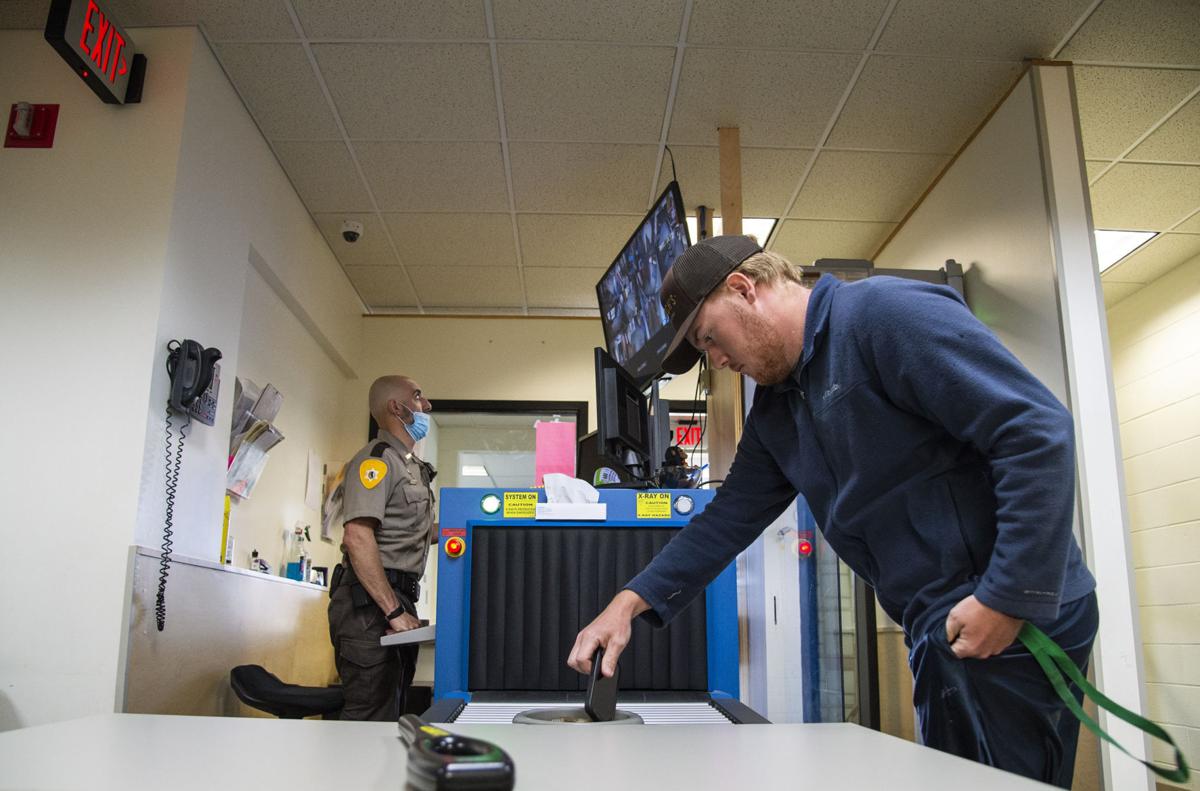 Officer Eric Veca works the security check point at the public entrance to the Law and Justice Center on April 21, 2021. 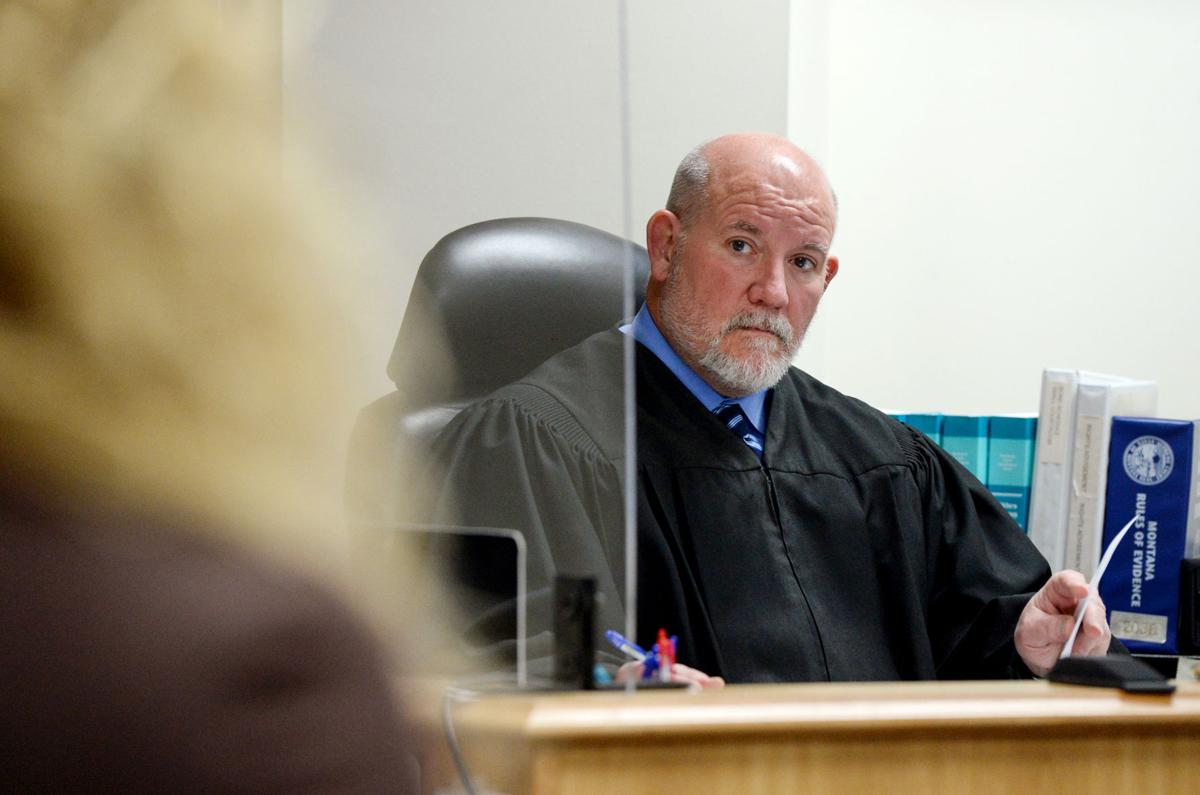 Judge Rick West listens to an argument from a prosecutor during a justice court hearing on April 15, 2021, at the Law and Justice Center. 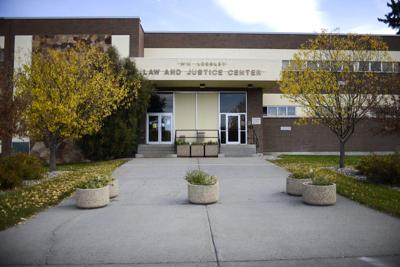 Officer Eric Veca works the security check point at the public entrance to the Law and Justice Center on April 21, 2021.

Judge Rick West listens to an argument from a prosecutor during a justice court hearing on April 15, 2021, at the Law and Justice Center.

As Bozeman has grown, its infrastructure has felt a crunch.

It’s evident in many ways: when cars sit for several cycles at the light at Main Street and 19th Avenue at rush hour, when Bozeman schools hit enrollment records and when city commission meetings about parking regulations draw a line of people for public comment.

“Like any infrastructure, the courts are just the same as the schools, as the roads, as the law enforcement. It’s the same concept,” she said. “The more people that are moving to the community, the more services they require, and that includes the court system.”

The 18th Judicial District, Gallatin County’s District Court, is staffed by three judges and a standing master who handles a lot of family law cases, like adoption and guardianship cases. The last new district court judge was added to the district in 2007, when the county had somewhere around 87,000 people, according to the U.S. Census Bureau.

Since then, Gallatin County has added somewhere in the ballpark of 27,000 residents, pushing the population over 100,000 people. Workloads for virtually every person working in the Law and Justice center, from public defenders to district court judges, have increased significantly.

According to a study by the state Supreme Court administrator, the Gallatin County District Court needs 6.78 full-time judges to keep up with the workload it has.

In other words, the county would need almost four additional judges for each judge to have what the highest state court deems the appropriate workload for one person.

Since taking office in October, Ohman has had just two two-day weekends, he told the Montana Legislature during a confirmation hearing in March. He’s worked six days a week all other weeks. He knew that coming into the job, he said.

McElyea has a similar schedule. Brown is more a night owl, according to McElyea, working far past closing time on the weekdays. But the workload doesn’t just impact the three district court judges.

Some cases must be prioritized by law. That includes involuntary commitment, temporary orders of protection, youth court and criminal law when a person is incarcerated or released from jail awaiting trial.

Those cases, by law, have to be handled in a fast manner.

And that means that the cases that don’t fall under statute — mainly civil cases, which can be complicated — fall by the wayside.

“Most of the civil trials that are going to be going to trial, they’re usually fairly complex and they take a lot of time and there’s usually a lot of exhibits and witnesses,” Ohman said.

If a jury is needed, that takes even more time. Aside from the obvious, like choosing the jurors out of the jury pool, Ohman said it just takes more time to get larger groups of people in and out of the courtroom for breaks or issues that don’t involve the jury.

“If somebody asks for a quick civil trial, I could get it in (the calendar),” he said. “But if somebody asked for a two week trial, I don’t know how I could set that this year.”

Alanah Griffith, a civil attorney in Bozeman, said the way judges are forced to schedule cases means that sometimes, even if she and a client have a great case, it just makes more sense to take a financial hit instead of waiting for a case to make its way to a courtroom.

“It puts out jury trials or judge trials for years, whereas in other counties, I can get a trial within a year,” Griffith said.

Griffith is a chairperson of the Montana Bar Association board and said she spoke to the Chronicle as an attorney and not as a representative of the association.

In litigation, Griffith represents a lot of developers and construction businesses in the Bozeman area, and sometimes, she and a client find language in a code that could be interpreted in a few different ways.

“Maybe the city is interpreting it in a way that I don’t think is necessarily correct, and their interpretation can cost my developers a million dollars,” Griffith said. “I can’t go to court and get a fast answer on what that language means. I have to tell my clients that their project can be on hold for four years before I can get an answer … monetarily, it makes better sense to continue with the development than it does to put it on hold.”

While the delay most notably impacts civil cases like the ones Griffith works on, it can also have a big effect on some kinds of abuse and neglect cases, especially those where children are separated from families.

“When a family gets separated because the department has removed children, a lot of times they don’t see the judge until about 20 days from that removal,” said public defender Annie DeWolf. “It’s heartbreaking, and that period of time creates a lot of resentment between the parents and the (Child Protective Services) worker, and it almost creates a barrier that is really hard to overcome later.”

A lot of what DeWolf and the public defender’s office does falls in the realm of those statutorily prioritized criminal cases. But just because the cases are prioritized doesn’t mean that the workload doesn’t impact those cases, too.

All initial hearings are in Justice Court, but trials for felony charges move to District Court. That means information needs to move from court to court, and DeWolf said that it sometimes takes weeks for the state to file the information in district court.

“That means that their case is not necessarily moving forward,” DeWolf said. “It also means that any bail issues are hard to get addressed in that time.”

But it’s not just those factors that can make cases take longer — another puzzle piece is just the amount of work compared to the amount of hands on deck.

“When we talk about delay, it’s not just the court calendar, there are a whole bunch of reasons why cases move at different paces,” DeWolf said. “We have to work our cases in a logical fashion, and sometimes that involves working the cases that involve people in custody first and then that causes delays for other cases.”

Uncertainty in the court

A lot of what County Attorney Marty Lambert’s prosecutor’s office deals with are those prioritized cases. But while those cases may be prioritized, there are a lot more than there were a decade ago — roughly 50% more.

“For the most part, all different types of my cases that go to district court are at record numbers,” said Lambert.

The number of cases means that trials are being set further out — some serious criminal cases are already being set for trials in 2022 because of the time the cases will need in the courtroom.

“We do the best that we can talking with crime victims and letting them know what to expect. But still, there’s a tremendous amount of uncertainty if you’ve never gone through it before, and it’s stressful just to start with,” he said. “You add that all up and then things drag out month after month and in some cases year after year, it’s very hard on them because it seems like they’ll never get justice either.”

But much like the uncertainty in waiting for a case to make its way through the courts, the courts are at the whim of the Legislature.

All three district judges agreed that, while a fourth full-time judge wouldn’t solve the court’s issues, it would relieve at least some of the stress on the judicial system and allow all cases to move quicker.

There will still be other issues that need sorted out with the addition of a fourth judge, including where that judge’s courtroom will be and how the space will be made for that in the Law and Justice center.

But the fate of the number of Gallatin County District Court judges is up to the whims of the Montana Legislature in more than one way.

Former Gov. Steve Bullock appointed Judge Ohman, who took over for former District Court Judge Holly Brown in October 2020. But Ohman hasn’t yet been fully confirmed by the Legislature. The Senate Judiciary Committee voted Friday morning to confirm Ohman, but he still faces a vote of the full Senate.

If Ohman isn’t confirmed by the end of the session, which is creeping nearer and nearer, the already strapped court will go down to two judges for the time being.

“Hopefully I’ll get confirmed and we don’t have to worry about this and we can just all do our jobs,” said Ohman.

This story has been updated to clarify that Standing Master Bowen is counted as a half-time judge in the Supreme Court administrator survey, but works in the Gallatin County District Court full-time.