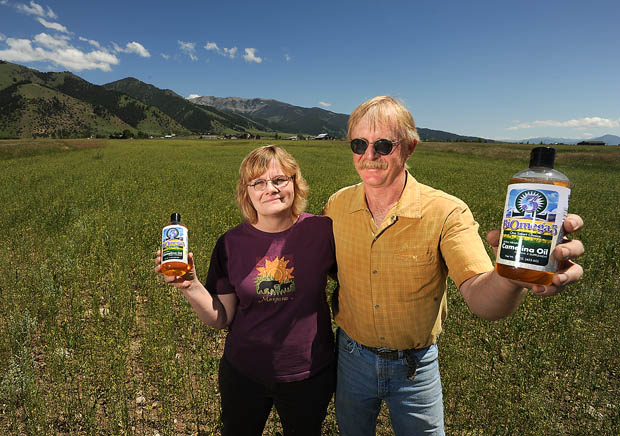 Kim and Bill O'Connell stand in their field of Camelina north of Bozeman with bottles of Camelina Oil which they are now selling as health supplements at local stores. 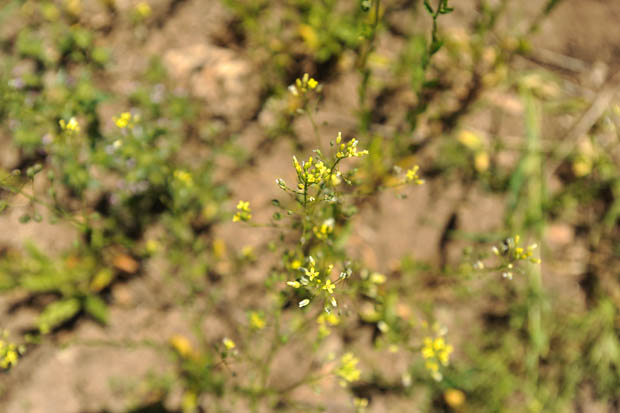 Camelina grows in one of O'Connell's fields recently.
1 of 2

Kim and Bill O'Connell stand in their field of Camelina north of Bozeman with bottles of Camelina Oil which they are now selling as health supplements at local stores.

Camelina grows in one of O'Connell's fields recently.

Kim O'Connell cooks with oil from the camelina plant instead of olive oil.

"I use it a lot in cooking pestos, put it in salad," Kim said.

"Personally, I think it's got a little more flavor than other cooking oils," said Kim's husband, Bill. He described it as having an almond-taste.

The Bozeman couple grows the crop on land they rent just off of Springhill Road. A few years ago, they started selling the oil as a health supplement at local farmers markets.

Next month, bottles of their product, BiOmega3, will line local health and grocery store shelves.

Camelina is often talked about for its potential as a biofuel source. But it's also rich in Omega-3 fatty acids, good fats that lower cholesterol, prevent excessive blood clotting and may reduce the risk of heart disease. They're considered essential to the human body but they're also a fat the body can't make.

Yet, the O'Connells are among a relatively small group of people trying to sell camelina oil for its healing powers, said Alice Pilgeram, research professor in plant science at Montana State University.

"The whole thing comes down to that this is not approved by the (federal) Food and Drug Administration," Pilgeram said. "However, there's a long history of consumption and it can be marketed in its pure form as a supplement.

"Just getting it out and getting people to give it a try -- that's the hard part," Pilgeram said.

The O'Connells can sell camelina oil in its natural state, a golden liquid that looks similar to other cooking oils, after it's pressed from the seed. They can't sell it as part of an already prepared food or labeled as a food ingredient.

But camelina has been around for a long time, Pilgeram said, and it hasn't caused any problems.

Europeans began growing camelina as early as 3,000 years ago. They grew it for food and for lamp oil, among other things.

"Based on the European use, there's nothing wrong with this oil," Pilgeram said. "I use it. I stir fry with it."

Others pour it onto their dog's food to give the animal a shiny coat. The oil can also be drunk as a daily nutrition shot like flax or fish oil, or eaten in seed form by the handful.

When a camelina seed is crushed, it makes two products: oil and meal.

The FDA in 2009 approved allowing the meal to be sold as feed for feedlot beef and broiler chickens. It has not gotten approval as feed for hens laying eggs and other farm animals. The animals absorb the fatty acids and they're passed on to humans who consume them or their biproducts.

But it's unclear whether camelina oil will ever get FDA approval for food.

The military is trying to develop camelina-based fuels for use in its aircraft and ships and government officials have declared they won't use food crops as fuel alternatives.

"It's going to be very political" whether camelina ever gets approval as a food ingredient, Pilgeram said.

The O'Connells began growing camelina hoping to get into the biofuel market.

But they now believe it's worth more as a health supplement, since it allows them to grow at a smaller scale.

"We don't have to produce hundreds of thousands of gallons right off the bat and I think the health food market has tremendous potential for growth," Bill said. The O'Connells planted about 25 acres of camelina this year.

While the market is small for camelina oil as a health supplement, people will pay more for it, Pilgeram said. As a biofuel, the price needs to be competitive with $2.50 per gallon petroleum.

An 8-ounce bottle of the O'Connell's camelina oil retails for $10.

"I think the potential is huge," Bill said.

BiOmega3 can be found in Bozeman at Town & Country, Heeb's East Main Grocery, the Community Food Coop and Gesundheit.

Amanda Ricker can be reached at aricker@dailychronicle.com or 582-2628.