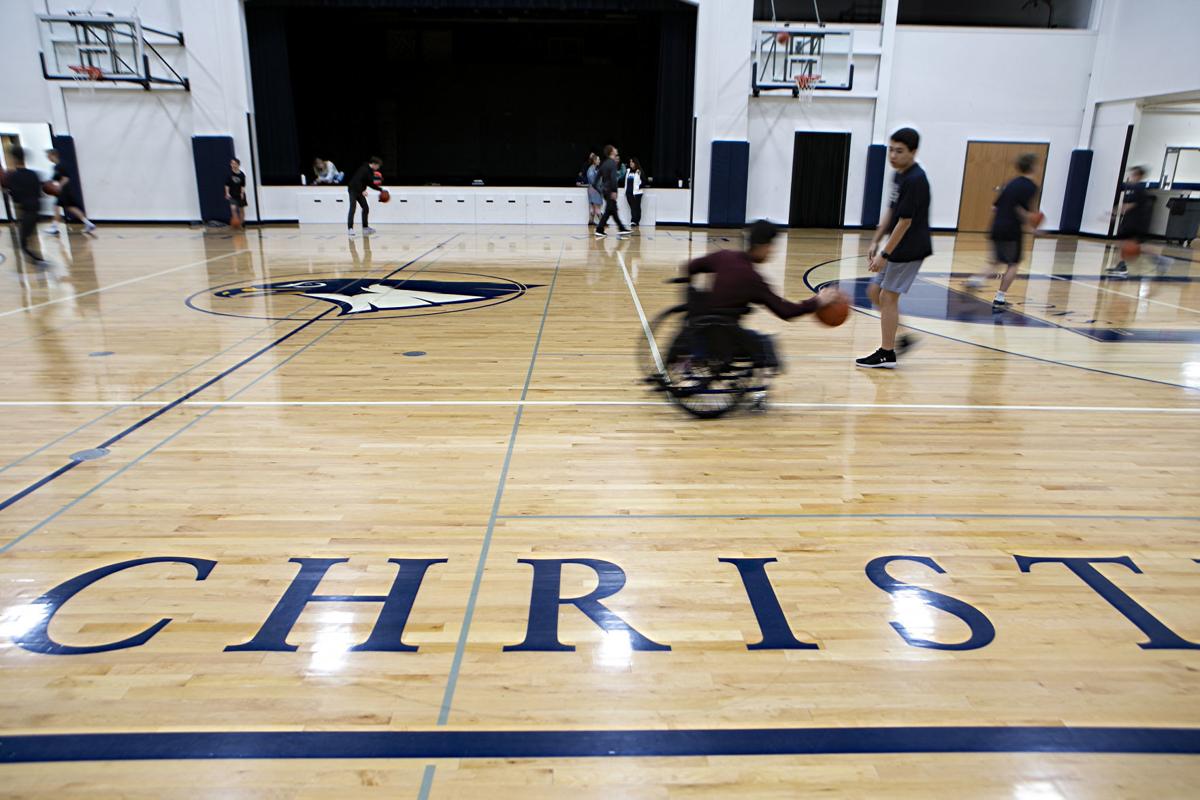 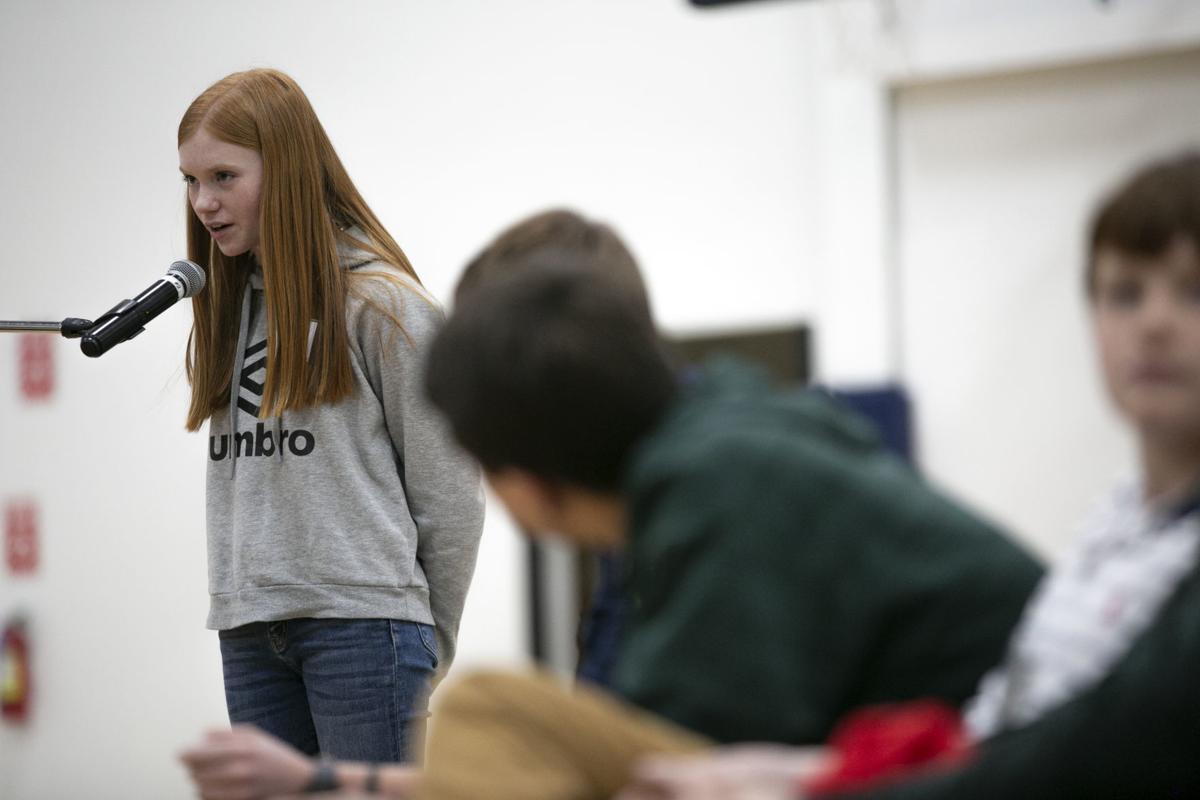 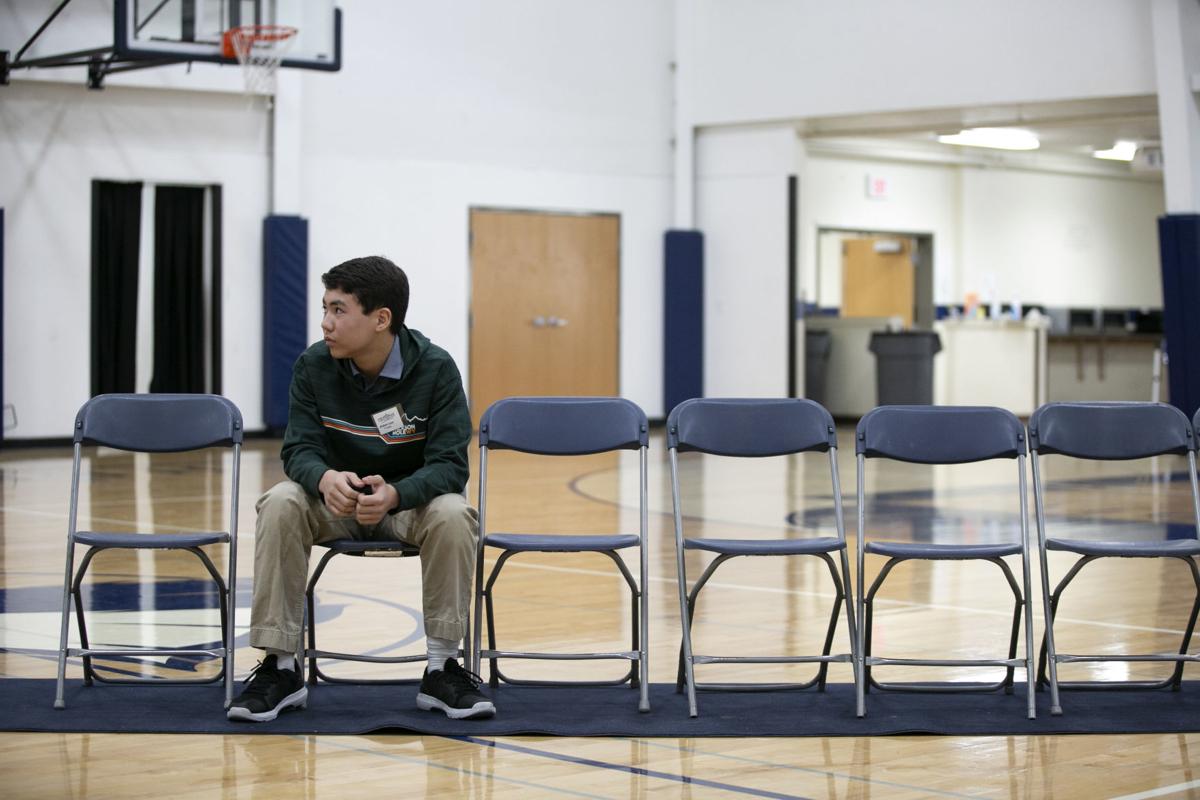 Seventh grader Aiden Lee sits as one of two finalists during a spelling bee Wednesday, Jan. 15, 2020, at Heritage Christian School. 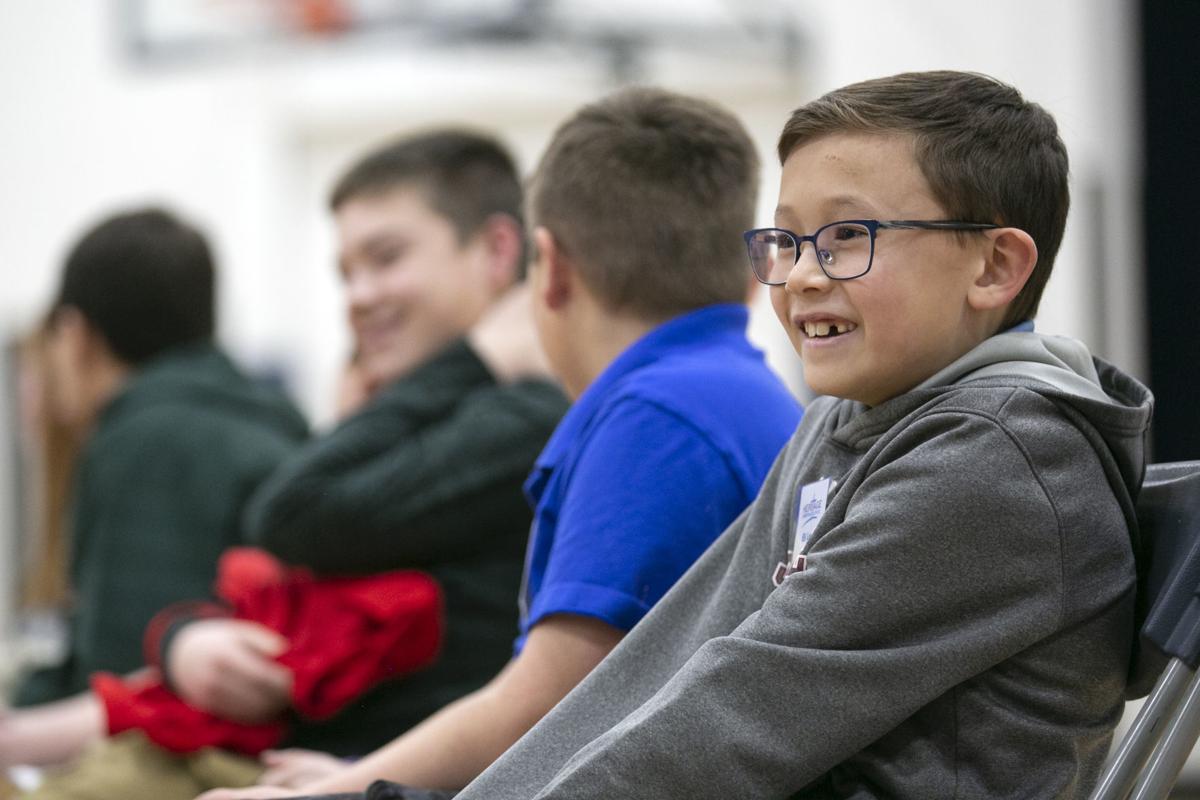 Seventh grader Aiden Lee sits as one of two finalists during a spelling bee Wednesday, Jan. 15, 2020, at Heritage Christian School.

More than 100 years ago, Montana and many states erected legal walls against spending public money on private religious schools, but today school choice activists are seeking to bring down those barriers using a case from Montana.

The U.S. Supreme Court will hear oral arguments Wednesday in a lawsuit brought on behalf of Kendra Espinoza and two other Kalispell-area mothers whose children attend Stillwater Christian School.

Their lawsuit against the Montana Department of Revenue concerns a school choice program that the 2015 Legislature created. It provided $3 million a year to be spent on tax credits for individuals and business taxpayers who donated up to $150 to a new scholarship program for private school students.

The Montana Supreme Court ruled the program violated the state’s constitution, which bars spending any public money directly or indirectly to support religious schools. Montana’s high court struck down the entire scholarship program, a decision now being challenged in the nation’s highest court.

The scholarship program is small, helping about 40 or 50 students a year — 94% of whom attend Christian schools, according to court filings. But the potential impact of the Espinoza case is huge.

The Institute for Justice, the nonprofit legal advocacy group that has represented the Kalispell mothers from the start of their lawsuit, called it “one of the most important education reform cases in the past half century.”

Erica Smith, Institute for Justice senior attorney, said Friday in a press call that if the Espinoza lawsuit wins, legal barriers to school choice will fall in at least 17 states, momentum for school choice will grow and thousands of American families will get more choice in where their children attend school.

The Institute for Justice — which has received funding from billionaires Charles and David Koch and the Walton and DeVos families — argues this case could stop Montana’s discrimination against religious options, uphold the free exercise of religion and expand school choice.

Opponents, including the nation’s two largest teachers’ unions and liberal groups, argue the Espinoza case threatens public schools and the basic principle of separation of church and state.

If Montana loses the Espinoza case there will be “a virtual earthquake” in public education in this country, Randi Weingarten, president of the American Federation of Teachers union, said last week.

“They’re demanding the court require public funding of religious schools,” Weingarten said. “This is a blatant affront to democracy.”

Thirty-seven states have constitutional language similar to Montana’s barring aid to religious schools, and the Espinoza case could gut those protections, opponents warn.

“This would mandate that public monies must go to religious education,” Weingarten said. “It would basically change 200 years of practice in the United States.”

The U.S. Supreme Court is expected to issue a ruling this summer.

“We’re optimistic,” said Diana Verm, senior counsel with the Becket Fund for Religious Liberty, “the court will get this right and rule in favor of Kendra Espinoza.”

Kendra Espinoza said her two daughters had been struggling in public school, facing distractions, bullying and ostracism. So she enrolled them in Stillwater Christian School, where they are doing well and want to stay.

Yet as a single mother, Espinoza found it hard to pay private tuition, even while working three jobs, holding yard sales and selling quilts to raise the money.

“School choice is so important to me,” Espinoza said on an Institute for Justice video, “and I feel that’s every parent’s right and responsibility to make that choice.”

There’s no reason that her daughters shouldn’t be able to use the scholarship funds, she said, “just because they go to a religious school.”

The 2015 Montana Legislature passed Senate Bill 410, sponsored by Sen. Llew Jones, R-Conrad, to promote school choice through tax credits for private school scholarships. Gov. Steve Bullock, a Democrat who had vetoed similar bills in the past, allowed the bill to become law without his signature.

The Montana Department of Revenue issued a rule excluding religious schools from the scholarship program, based on Montana’s version of the Blaine Amendment — a section of the Montana Constitution that prohibits any “direct or indirect” payment of public funds to aid any school or university controlled by any church, sect or denomination.

Espinoza, who was counting on getting a scholarship, and the two other Kalispell mothers sued and won in a local court. But they lost in December 2018 at the Montana Supreme Court, which decided 5-2 that the entire program was invalid. The court ruled the $150 tax credit indirectly paid tuition and so aided private religious institutions.

More than 7,000 cases are appealed each year to the U.S. Supreme Court, which usually accepts only 100 to 150. In June the court agreed to hear the Montana case.

Dozens of Montana families were allowed to keep receiving the scholarships this school year while the case was appealed.

While 94% of the Big Sky Scholarships went to Christian school students, according to court filings the only non-religious school where students received scholarships was Cottonwood Day School, a private Bozeman-area school for children with special needs.

More than 40 friend-of-the-court briefs have been filed with the Supreme Court in the Espinoza case.

Espinoza supporters have spotlighted what they call the “ugly” and “bigoted” history of the Blaine Amendment to discredit state bans against public funding of religious schools.

The 19th century Blaine Amendment grew out of that era’s anti-Catholic prejudice, Nick Sibilla, an Institute for Justice analyst, wrote this month in The Atlantic magazine.

In 1875 Rep. James Blaine of Maine introduced a U.S. constitutional amendment to prohibit tax money from being used for schools of any “religious sect or denomination.” The effort was seen as denying funding to Catholic parochial schools at a time when many American Protestants felt hostile to growing numbers of immigrants.

When Montana became a state in 1889, Blaine Amendment language was included in its original constitution.

In 1972, the state held a Constitutional Convention to draft a new, more modern constitution. Again a ban on public funding of religious schools was included in the new constitution, which Montana voters ratified.

Ten surviving delegates who participated in the 1972 Constitutional Convention wrote a friend-of-the-court brief to the U.S. Supreme Court, arguing that they weren’t motivated by anti-Catholic bigotry. In fact, the drafters included language in the new constitution to ensure that federal funds could be passed through the state to support religious schools.

The 10 delegates — including a farmer, minister and several attorneys — wrote “that far from being driven by anti-religious bigotry, the no-aid clause was essential to the Convention’s efforts to promote educational opportunity for all through a robust state-funded public school system.”

The fact that the convention supported federal pass-through funding to religious schools reflects the fact that the delegates and the people of Montana wanted, they wrote, to “serve the interests of both religious institutions and public schools.”

Espinoza case supporters, however, argue that the 1972 constitution doesn’t cleanse Montana’s no-aid law of its past prejudice against Catholics.

Five of the current Supreme Court justices are Catholics and a sixth was raised Catholic.

The Espinoza case gives the U.S. Supreme Court the opportunity to “junk Montana’s Blaine Amendment” as violating the U.S. Constitution’s religious freedom and equal protection clauses, argued the Institute for Justice’s Sibilla, and “set a strong precedent against any law born of bigotry, even if other justifications seem neutral.”

Shawna Finch sat in the bleachers of the gleaming gym at Bozeman’s Heritage Christian School and watched as her daughter Claira competed last week against eight boys in the school spelling bee.

Finch said her oldest child graduated from Heritage Christian and three children are still enrolled, which means paying tuition for all three.

She said she hadn’t heard of the Espinoza case going to the Supreme Court, but thought a tax credit for private school scholarships “would be helpful.”

“I’d appreciate it for sure,” Finch said. “I feel like I’m paying for other kids to go to public school.”

She said she feels her kids are getting a good education, better than in public school, because classes are smaller, teachers push them pretty hard, and “they teach a Christian worldview in all subjects.”

Gerry Goede, administrator at Heritage Christian, which has more than 200 students, said every year two or three of his students received Big Sky Scholarships.

Goede said he donated to the tax-credit-supported scholarships, even though donors can’t designate that the money will go to any particular student, school or even town.

“Most of us who gave just wanted to help a family somewhere,” Goede said. “I think families need a choice. For many families public schools are great, but for some families a private education provides a better education.”

The school teaches a Christian perspective in all its classes, from math and science to English and social studies.

“God is part of everything we teach,” Goede said. “Being Christian isn’t just something we do on Sundays.”

U.S. Supreme Court rulings in recent years have moved in the direction of allowing public funds to benefit religious schools.

In 2017 the court ruled in the Trinity Lutheran Church case that the state of Missouri violated the First Amendment when it excluded churches from a state program to make playgrounds safer because of the state constitution’s strict separation of church and state.

The state can’t disqualify Trinity Lutheran just because it’s a church, Chief Justice John Roberts wrote. Roberts added, however, that this decision does “not address religious uses of funding or other forms of discrimination.”

The court’s conservative trend may be why teachers’ union leaders sounded so worried last week about the Espinoza case.

Garcia argued the case could take away millions of dollars from public schools that already struggle with crowded classrooms and would mean “an absolute drain on critical resources from neighborhood schools.”

Weingarten said it was only when Eric Feaver, president of the Montana Federation of Public Employees, brought the Espinoza case to national union leaders’ attention that “we realized we have a four-alarm fire.”

The entire Montana public school community opposes the Espinoza case, Feaver said, from rural schools to professional associations to the Montana School Boards Association. They oppose anything that would erode financial support for public schools, he said.

Montana is a poor state, Feaver said, but it believes we have an obligation to provide a free quality education “for all our kids.”