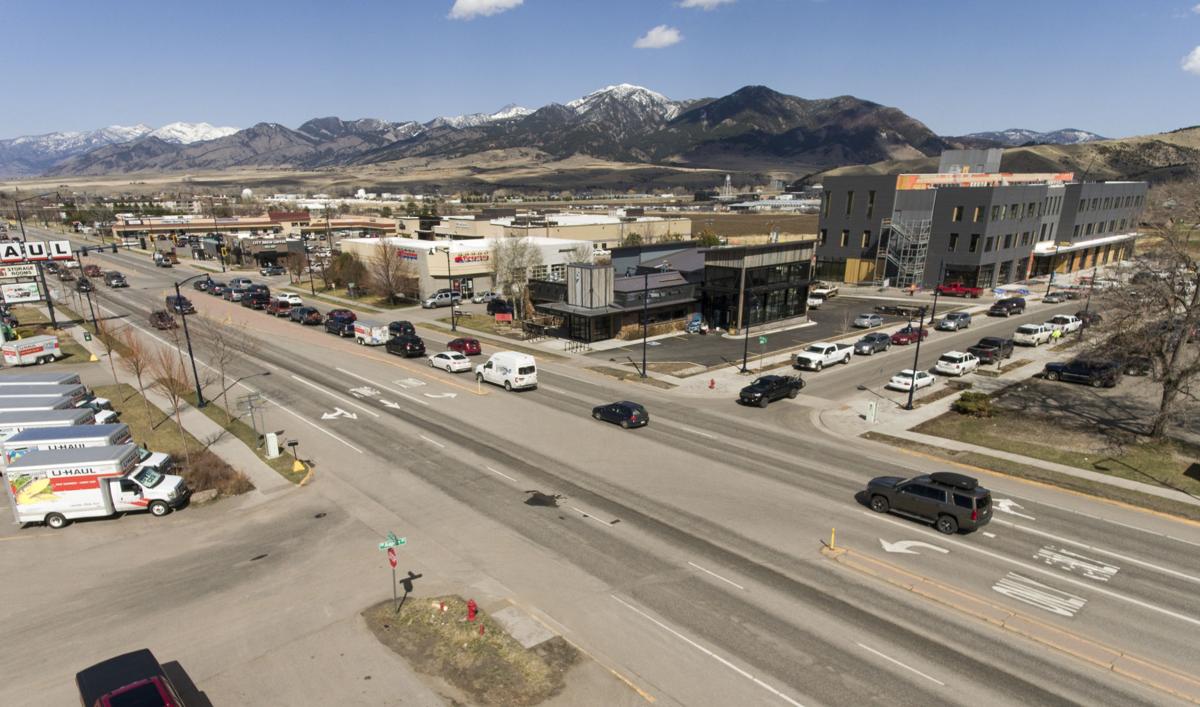 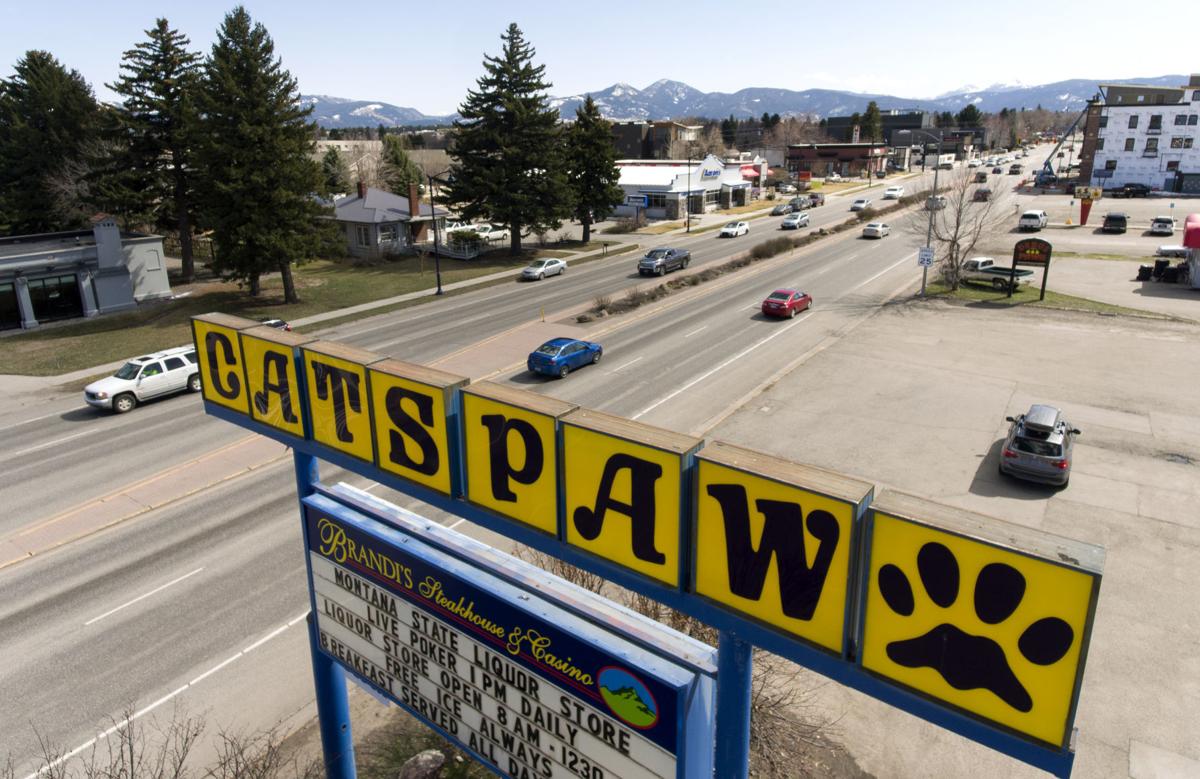 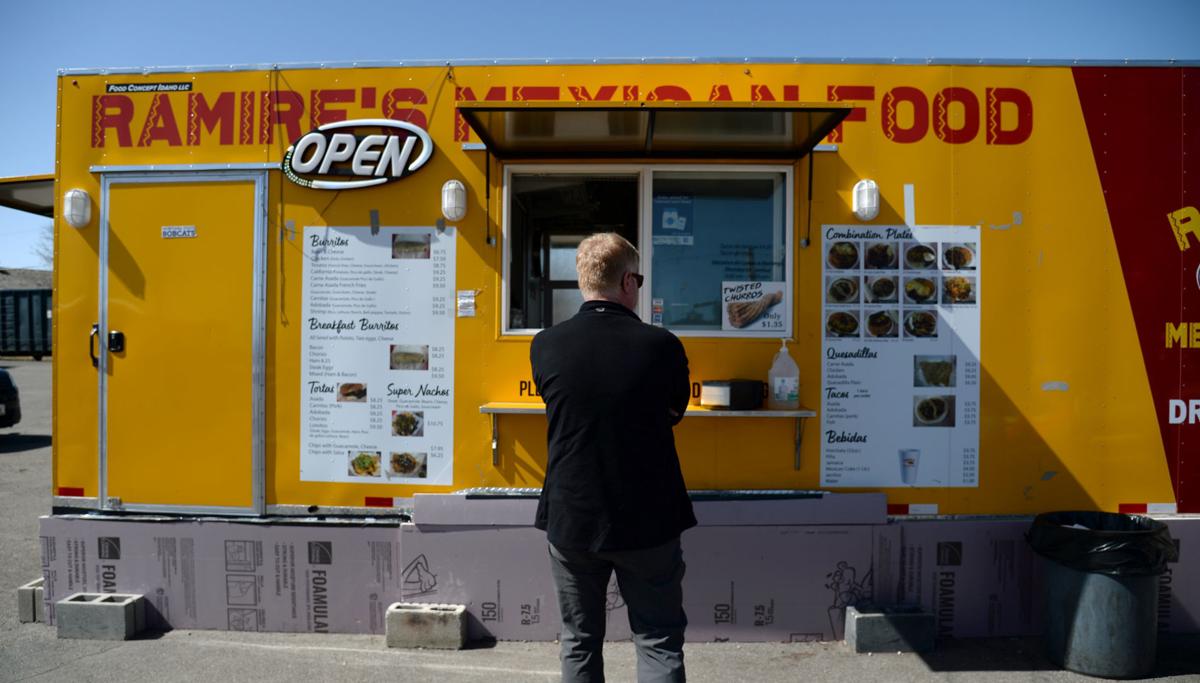 A man waits to place an order at Ramire's Mexican Food Truck on North 7th Avenue at lunch time on April 7, 2021. 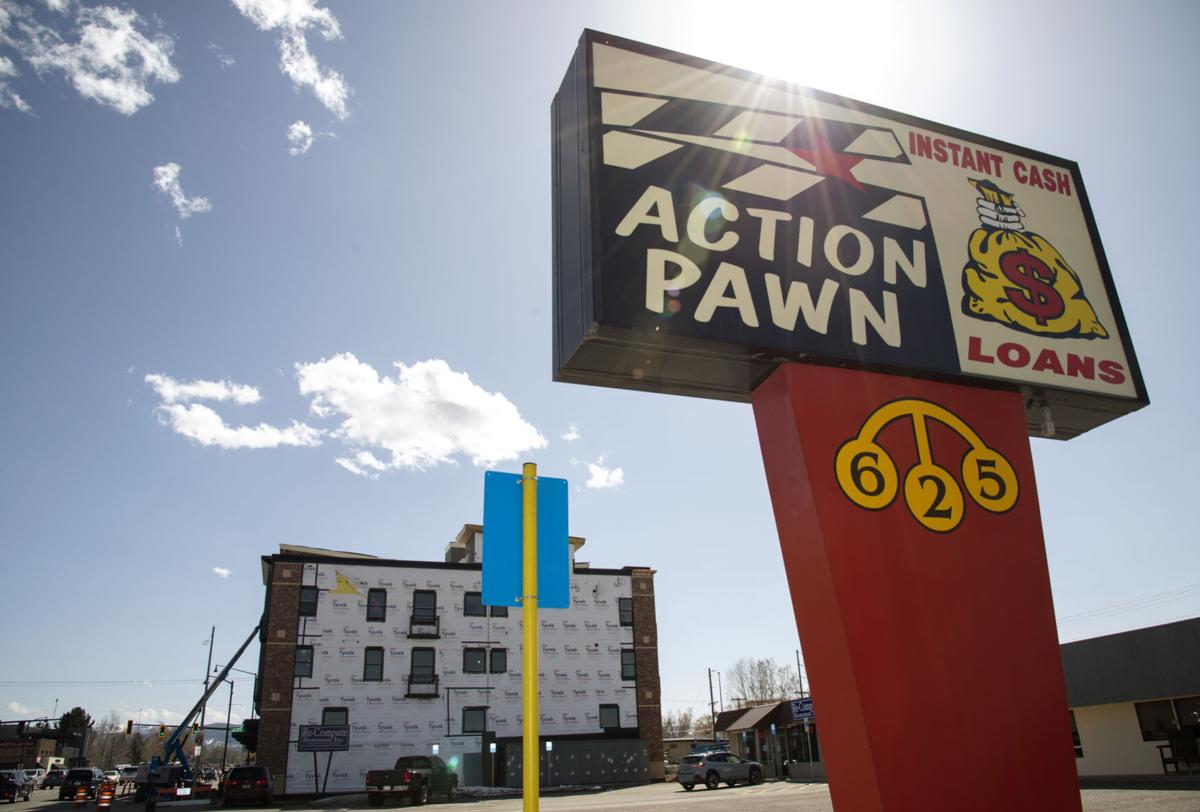 The Ruh Building is being constructed behind the Action Pawn on North 7th Avenue, April 7, 2021. 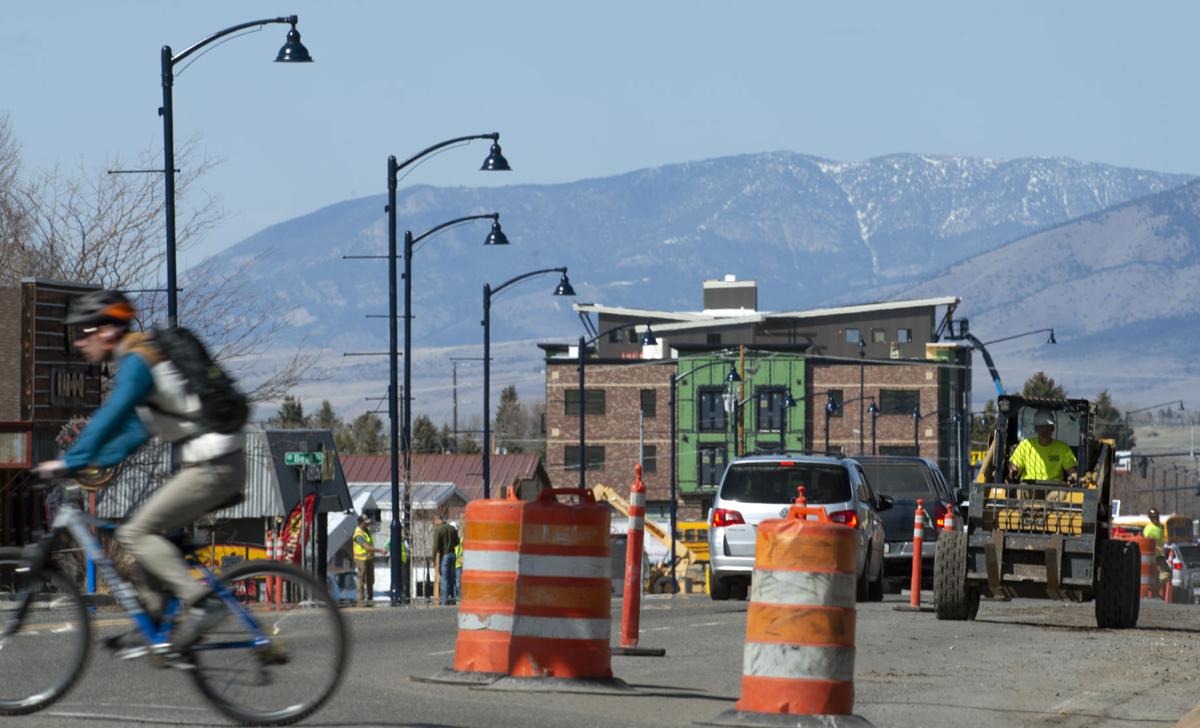 A cyclist bikes past construction on North Seventh Avenue, April 7, 2021. 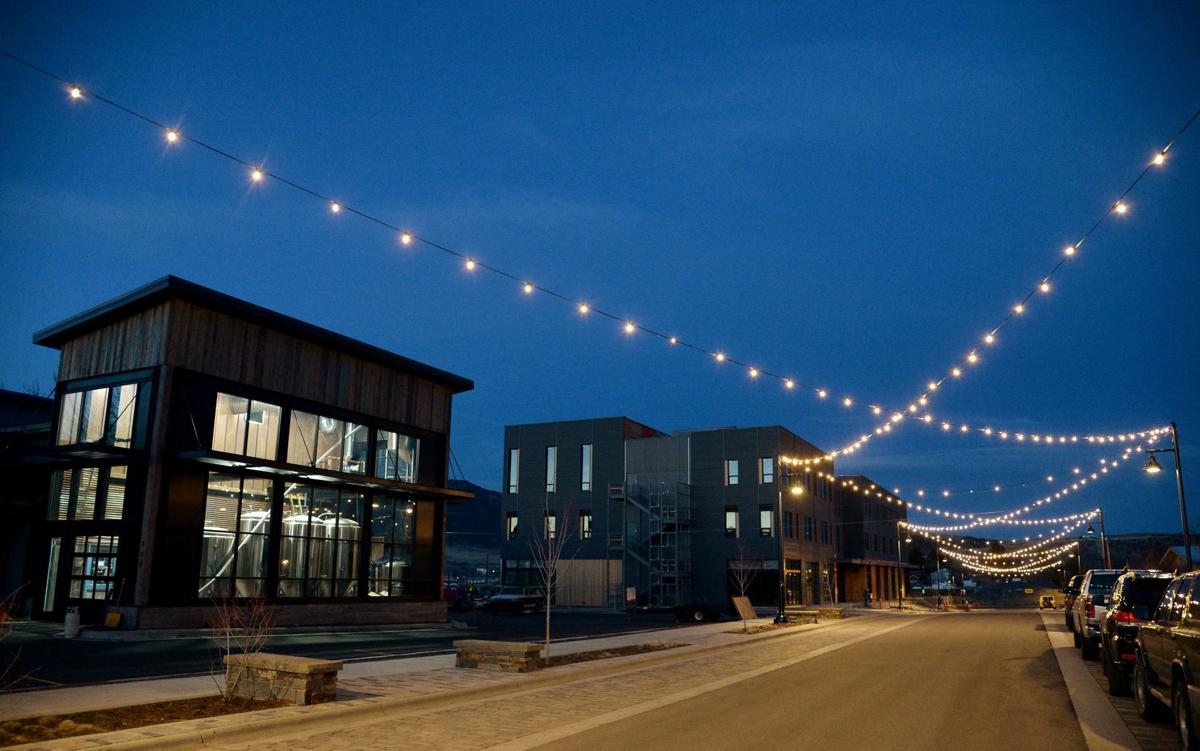 Brewing tanks are visible in the new building being constructed on the corner of West Aspen Street and North Seventh Avenue on April 9, 2021. 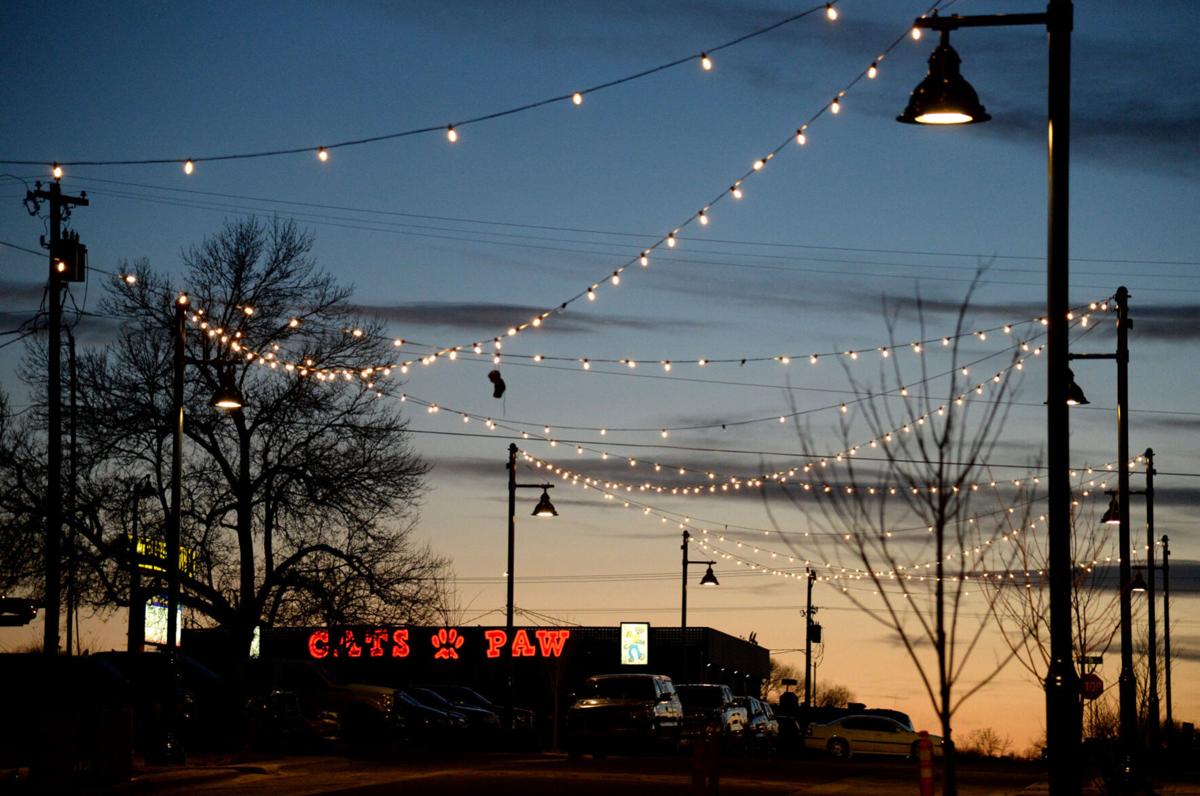 The Cat's Paw peaks out behind rows of lights strung over West Aspen Street on April 9, 2021. 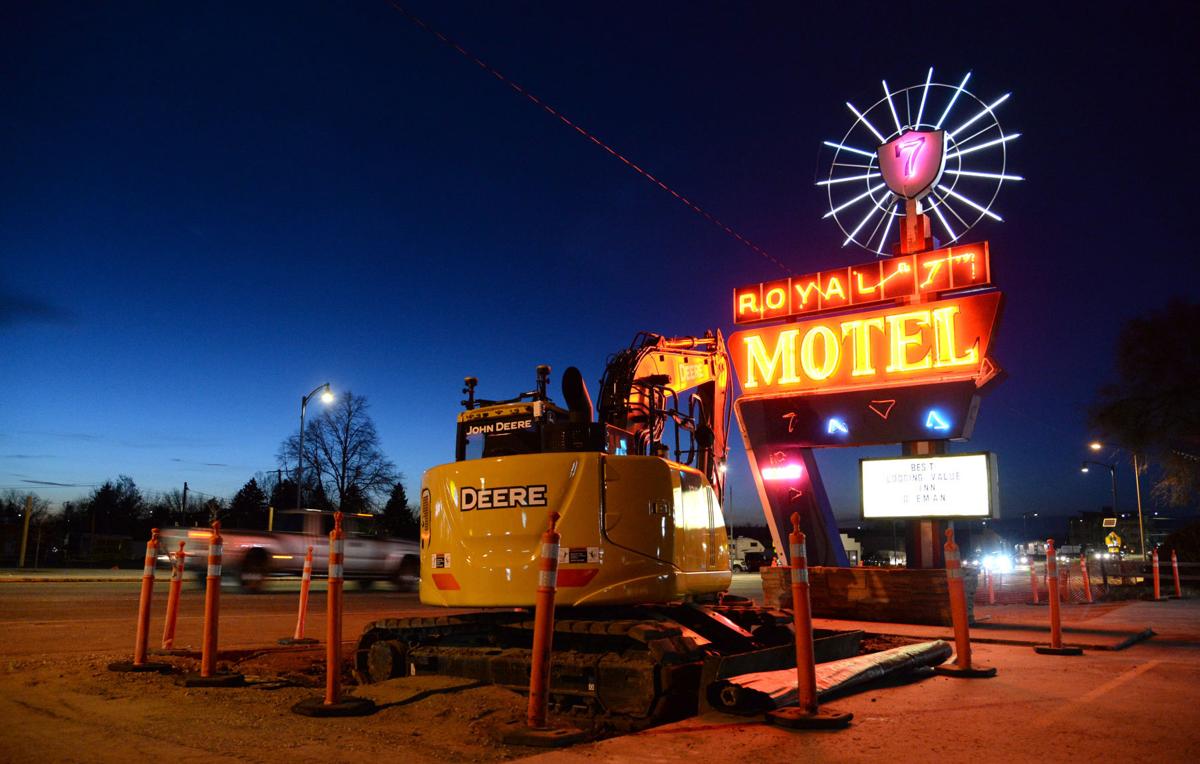 Construction equipment is parked for the night in front of the Royal Motel sign on North 7th Avenue on April 9, 2021.

There is perhaps no better picture of Bozeman’s past, present and future than the roughly 1-mile corridor of North Seventh Avenue that extends from the interstate to Main Street.

For decades, the street has been an old-school, auto-driven commercial strip.

In the last half of the 20th century, North Seventh became home to low-lying buildings with large, splashy signs for motels, restaurants and auto shops.

There was an eclectic mix of businesses, from grocery stores and gas stations to a taco stand and a Kentucky Fried Chicken.

But the street floundered as Bozeman grew around it: the big chain stores settled into North 19th Avenue, Main Street continued to grow, and Seventh became “a place that people pass through on their way to somewhere else,” said David Fine, city economic development specialist.

“It’s not that it’s changed, it’s that the rest of Bozeman changed,” said Jacob Klatt, whose family has owned the Royal 7 Motel since the early 70s. “I wouldn’t say it was left behind but it kind of stayed consistent.”

Nowadays, the street is less defined by the furniture stores, auto and pawn shops and family-owned small businesses that have made up its core than it is by the hammering and beeping of construction vehicles.

Clustered together with the longstanding businesses are new developments and renovated buildings like the RSVP Motel and Midtown Tavern and a slew of construction sites.

The list of new builds and renovations there is long.

At the intersection of Seventh where Durston and Peach meet, the newly renovated RSVP Motel stands on one corner next to a new concert venue, a mixed use building with residential on the upper floors towers from another, and a new mixed use building sprouted on the other.

A few blocks north, Aspen Street is planned to be the site of yet another mixed-use building with commercial, office and residential space on a street that has been remodeled specifically to have a block-party feel.

On the west side of the street, behind the U-Haul building, a 90-unit development with affordable housing is being planned.

At Seventh and Villard, a food truck and some picnic tables now occupy half of a parking lot and a new coffee stand sits across the street.

“It’s an area that is clearly in transition, and it has been for some time,” said City Commissioner Jennifer Madgic.

Developers, city officials and business owners say the area has momentum, years after the city began an effort to increase investment along the corridor, rebranded as midtown.

“For a long time people avoided going down North Seventh, it just became less of a destination,” said Brian Cattin, who co-owns Gallatin Valley Furniture on that street. “We’re starting to see that change.”

Though many agree that the street is long overdue for upgrades, some business owners are concerned about what all the development means for them.

“We hope that the city tries to protect the integrity of Bozeman and what Bozeman was,” Klatt said.

North Seventh is bounded by I-90 to the north, Main Street to the south and neighborhoods to the west and east.

Though the corridor certainly lacks in some areas, it has a lot of what might be the most valuable resource in Bozeman: land, be it empty space or lots with small buildings and large parking lots.

Several developers and city officials said the area is primed for infill development, which the city prioritized as a key goal in a new growth policy passed in 2020.

Fine leads the city’s urban renewal efforts for the midtown district, which include a tax increment financing district in the area roughly from I-90 south to Main Street.

Tax increment financing caps the tax base for a specific area and funnels increases in taxable value from the area to reinvestments in the area, which can sometimes help fund specific projects or streetscape and infrastructure work.

Madgic, who is the commission liaison to the urban renewal board for the midtown district, said North Seventh is a good spot to expand from the downtown core and to add density without contributing to sprawl.

“The infrastructure is already in place,” Madgic said. “The new improvements that are being proposed are really going to make it a choice area for more development to handle Bozeman’s growth.”

The area has attracted several residential developments, which historically have been lacking from the corridor.

The Ruh Building at Seventh and Durston is planned to have 16 apartment units on the upper floors and a handful of residential units are planned at the new Monarch building on West Peach Street near a slew of new townhomes. The Aspen Crossing mixed-use development, which is being constructed partially where a mobile home park once stood, is planned to include more than 20 apartments.

Mike Hope has been waiting on Seventh to come up for over 15 years, when he and his business partners began planning for the new development on Aspen Street.

The city granted TIF funds to Hope’s project, making it one of seven projects underway receiving help from the urban renewal district. The others are the Monarch mixed-use project, the Ruh mixed-use building, the concert venue ELM Building and the West Peach Condos, as well as an office building at Fifth and Tamarack.

A workforce housing project in the planning phase is also in the process of receiving TIF funding.

The 9TEN project on the west side of Seventh behind the U-Haul building is planned to include two buildings and 90 units, 20% of which will be deed restricted for affordable housing.

“It’s just exciting to see the whole revitalization of North Seventh,” Hope said. “It was kind of the vision we had from day one.”

At Seventh and Villard, a new food truck court occupies part of the lot across the street from a new drive-through coffee stand.

Austin Dayton opened the stand earlier this year. The area was attractive for a few reasons — it was affordable and heavily trafficked. But Dayton said he also wanted to get in on the “ground floor” of midtown.

“I see it becoming a hot, happening zone,” Dayton said. “Bozeman is growing, and essentially, if you’re a business, you want to be on Main Street because that’s where all people are. But now we’re spreading the honey out a little bit.”

“For us, we’re so excited for more restaurants to open and more services for our hotel guests,” Folkvord said. “Right now they’re walking to downtown.”

The city redid sidewalks along some of the corridor to put a buffer between the road and pedestrians, and zoning changes require new builds to be closer to the street, with parking to the side or the back to make the entrances more pedestrian oriented.

But several owners of long-standing businesses in the area said they are supportive of the area’s improvements and invested in the street’s continued growth.

Greg and Brian Cattin, who own Gallatin Valley Furniture, originally thought about leaving their run-down looking building the business had been in since the 70s and heading elsewhere a few years ago, but ultimately decided to stay on Seventh.

“We felt it was worthy of it,” Brian Cattin said. “And we had faith that it was going to rebound.”

Terry Ketterer, who owns the Cupcake Mountain Cupcakery with his wife, Christine, said they chose to locate their business on Seventh in part because they had a parking lot and the rent was affordable, but also because the street seemed to be an area where small businesses survived.

“I think having more people in the area, especially making Seventh more walkable and more entertaining to the eye will entice more people to get out and about, check out some more of the little places that they haven’t seen in a while,” Ketterer said.

Some business owners were wary about what all the development coming in means for them. Theron Fountaine, who owns Debos Pawn Shop, said he is concerned the area is gentrifying.

“I mean, I was born in Bozeman. So I’ve seen it change from basically gravel roads, and you know, Seventh is looking better all the time,” Fontain said. “I mean, I’m not pumped about the gentrification in my town. But if you’re going to live in a place that’s a desirable place to be, then there’s going to be people that move here. That’s just part of it.”

Klatt — the motel owner — said he thinks the development is a good thing for Bozeman overall, but worries about how it will impact the area’s character.

Madgic — the commissioner on the urban renewal board — said she thinks the area is moving away from a generic commercial strip with retail stores and big parking lots to a corridor with a more unique feel.

The goal, Madgic said, is to avoid having it look like “Anywhere, USA,” a term planners use to describe places that look like they could be in any city, anywhere in the country.

“I think back in the 70s and 80s, North Seventh looked generic, it looked like Anywhere, USA,” Madgic said. “I think bottom line the changes that are being proposed will really make it look like Bozeman.”