These apartments are located at 908 S. Tracy Ave. on the corner of South Tracy Avenue and East Harrison Avenue.

This duplex is located at East Lamme Street and North Rouse Avenue.

This is an installment in an ongoing Chronicle series looking to explore the issues facing the Gallatin Valley as we grapple with the opportunities and consequences of growth and the development it brings.

It’s become a regular sight at Bozeman’s commission meetings. A development proposal on the agenda — an apartment building, say, or a zoning change. And a crowd of neighbors lining up for the public comment period, near-unanimous in opposition to the D-word: density.

At a hearing last month, for instance, neighbors voiced concerns for rezoning a stretch of Lamme Street near North Seventh Avenue:

“We are really concerned about how this will impact our neighborhood,” said one resident.

“The peace and quiet our families have enjoyed for decades is, I think, priceless,” said another.

“The potential for large-scale development is negative,” said a third. “Our little, small neighborhood would become a sacrifice area.”

As Bozeman grows, adding nearly 2,000 residents a year inside city limits, the question at the heart of those comments is quite possibly the city’s knottiest political dilemma: Does density — the single factor smart-growth advocates call most important as the city looks at its future — have to be everything the neighbors of new development fear?

Not necessarily, experts and elected officials say, if development is well-designed and supported by effective planning. And, in any case, density’s alternatives — tossing sprawling subdivisions out onto farmland or letting unfilled demand drive Bozeman’s housing prices ever higher — may prove even harsher pills for the city to swallow.

Density that can work

Density can have its downsides, admits Randy Carpenter, a smart-growth advocate with Bozeman think tank Future West. Concerns like blocked views, additional traffic and extra cars clogging on-street parking, routinely cited by residents as they fight to keep larger-scale development out of their backyards, are understandable, he said.

But the flip side, he said, is that more compact development patterns preserve agricultural land and wildlife habitat, help residents avoid lengthy commutes and keep down the cost of infrastructure like new streets, which tend to cost taxpayers a million dollars a mile.

“Density has all these benefits,” he said. “The more we get, the more benefits accrue to the community.”

And, Carpenter said, he’s bullish on the power of good design to mitigate the downsides of higher-intensity development. Practices like incorporating open space and avoiding cookie-cutter facades can make a big difference, he said.

“I just think that’s what people don’t like about denser development, is that it doesn’t have open space and it doesn’t have variation,” he said. “When you’ve got a block long of beige, the same color, I think people reject that.”

Carpenter insists the Bozeman area has plenty of examples of well-designed density in both older and newer developments. For instance, he singles out a modest apartment complex at the corner of Tracy and Harrison in south Bozeman.

Containing 32 housing units, according to state property records, the complex of two-story green-and-beige buildings facing Tracy Avenue is clustered around a central courtyard and shaded by mature trees. Parking space, including a grouping of small garage units, is tucked at the back of the site.

“I would call that high density,” Carpenter said. “And it works.”

That view was echoed by one of the Tracy complex’s neighbors, Bozeman Mayor Carson Taylor, whose national historic register-listed home is just across the street.

He sometimes has cars from the complex park up against his lot, Taylor said this week, but other than that he maintains the apartments actually have less of an impact on him than another neighboring property, a house sometimes rented to college students.

“It’s pretty much not noticeable,” he said. “The single-family dwelling is definitely more of a factor.”

Carpenter also points to a house on the northeast corner of Lamme and Rouse, bordering downtown Bozeman, as well as the Valley West subdivision in the city’s northwest quadrant.

While adopting the stylings of a single-family home, he said, the Lamme house — honored with a city beautification award in 2005 — is actually a two-household unit, doubling the parcel’s housing capacity.

With Valley West, Carpenter pointed to the neighborhood’s centerpiece, 15-acre park, as well as how the development incorporates accessory dwelling units, or ADUs. ADUs, the logic goes, can be rented by homeowners to add a second living unit to a property and provide rental income that can offset a mortgage.

When it comes to density, Carpenter also said, what matters is less the actual number than the way a development is designed.

“It’s a way of measuring things,” he said, “but not such a good way of describing how a neighborhood or a community function, or what they look like, or the lived experience of people.”

Necessary, but not for everyone

As the city grapples with near-zero rental vacancy rates and soaring rents in the face of population growth, Bozeman’s elected commissioners have tended in recent years to take a favorable view of higher-intensity housing developments and zoning changes to support them.

While the commission nixed a zoning change for a potential 600-bed student housing project south of Bobcat Stadium in 2014, they approved plans for what’s now the 500-bed Stadium View complex in 2012.

This year, the body also approved a revised version of a 70-apartment project in west Bozeman’s Loyal Garden subdivision over concerns from some neighbors, and up-zoned several areas along North Seventh Avenue, or Midtown, in an effort to foster higher-density urban development.

“Any R-4s are good for the city’s housing stock,” Taylor said, referencing the city’s zoning designation for high-density, apartment-style housing. “There need to be more of them to house anybody who wants to live in the city.”

At times, he also said, concerns expressed by neighbors to new development can be hyperbolic, Taylor also said.

“I think people have a tendency to look at the worst possible situation,” he said. “Because it’s unknown, you tend to get worried.”

“People want to fight it instead of trying to make it work,” he said.

It’s important, said Commissioner Chris Mehl, for the city to encourage diversity in housing options, catering to different tastes and residents in different stages of life. That means picking particular places in the city, like Midtown, for higher-intensity development, he said.

Taylor and Mehl also pointed to planning gradual transitions from higher-intensity zoning designations like R-4 to lower ones like R-1, or single-family neighborhoods, as a key to managing higher-intensity development. They also said the city needs to consider whether infrastructure like streets and intersections can handle the additional demand.

“We’re going to need density, most likely, to be successful,” Mehl said. “But we have to do it right.”

The cost of avoiding growth

Down in Colorado, the city of Boulder provides an example for those who would like to see Bozeman put its foot down on expansion entirely.

Population-107,000, home to the University of Colorado and sometimes cited as a model for Bozeman’s future, Boulder has used regulation to clamp down on growth, limiting both density and sprawl. As far back as the 1970s, the city’s voters approved a 55-foot building height limit and instituted what a recent planning document describes as “one of the nation’s more restrictive residential growth-management ordinances.”

In one sense, at least, those policies have worked.

The average growth rate over the same period in Bozeman, for context, was 2.6 percent, enough to take the population living inside city limits from 22,800 to 43,000.

Boulder’s regulations, however, have had consequences for housing prices — a boon for long-term property owners, but a squeeze on the city’s middle class.

Earlier this year, for example, the Denver Post reported that the average list price for a four-bed, two-bath home in Boulder had passed the $1 million mark, placing the city in the top 1 percent of the country’s most expensive housing markets.

As Bozeman rumbles toward its future — and as life in the city, its nicer neighborhoods, especially, becomes an increasingly precious commodity — the D-word debate isn’t likely to fade.

“I think it means we’re finally a city, frankly,” said Mehl. “This is something cities struggle with everywhere.”

“I totally understand that you’re responsible for planning for future and for growth here in Bozeman,” one of the Lamme Street residents, Glenn Monahan, told city commissioners last month.

“I believe that that second part of your job description...” he continued, “has far more weight as far as my neighborhood goes.”

A sampling of Bozeman-area neighborhoods, along with their densities. The housing unit totals used for this analysis come from property information kept by the state Department of Revenue, and may vary somewhat from current conditions as a result of record keeping quirks or new construction.

Among the lowest density neighborhoods in the Bozeman area, the Triple Tree development sports 89 living units in mostly single-family homes, stretching across 606 acres of home lots and designated open space.

Adding 15,000 homes to the Gallatin Valley — about a decade’s worth of growth — at Triple Tree’s density would require developing more than 100,000 acres of land. The combined areas spanned by Bozeman and Belgrade today, in comparison, total about 17,000 acres. A 38-acre subdivision off Huffine just east of Four Corners, this neighborhood sees each of its 44 detached homes occupy, on average, 0.86 acres including a proportional share of roads and open space.

This swath of old Bozeman, spanning about 66 acres, houses approximately 280 living units. A majority of its residences are single-family homes, but the neighborhood also includes a fair number of duplexes, triplexes and homes fitted with accessory dwelling units.

The total also includes a 32-unit apartment complex on the corner of Harrison and Tracy — if the lot holding the complex was instead developed as a trio of single-family homes, the neighborhood’s average density would be lowered to 3.81 units an acre.

Combined, the first three phases of the newer Valley West neighborhood in northwest Bozeman holds 537 living units on just over 130 acres. In addition to single-family homes and a 15-acre park, the development also includes a considerable number of townhouses and condos with aesthetics that mimic single-family homes.

State property records, which may not account for recent construction, count 55 vacant lots in the subdivision. Without them, the development’s total density is slightly less than old Bozeman's Butte Addition — but assuming each is developed as a single family home without accessory dwelling units bumps the density to a figure slightly higher than the city’s historic development pattern. 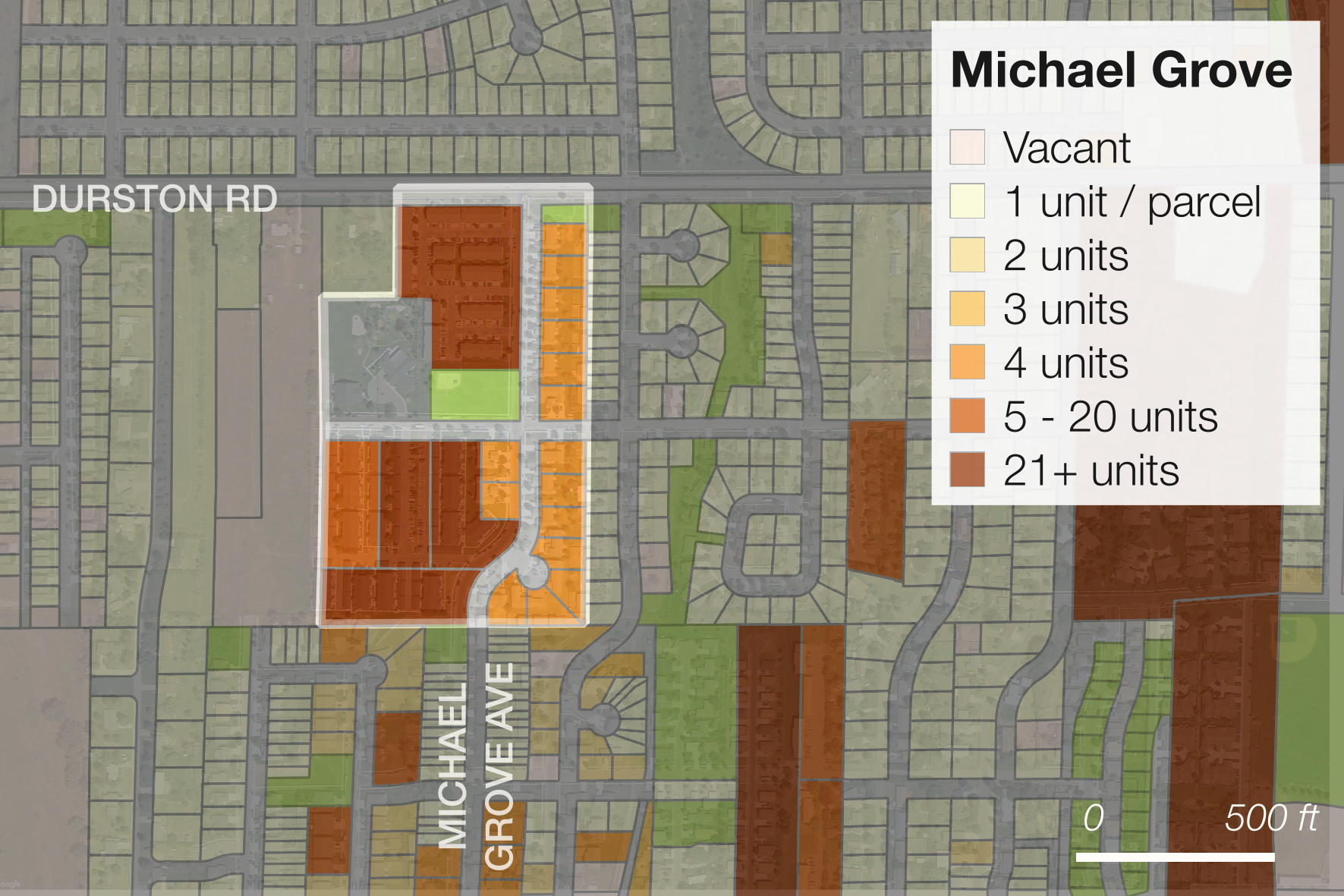 Surrounding the northern end of Michael Grove Avenue, this 23-acre fourplex-and-apartment development is among the denser neighborhoods in Bozeman, even though it spans a park and Montessori school.

Excluding the school from the density calculations, the density figure for the 210-unit development rises to 10.4 units per acre. At the 9.11 units-an-acre density, 15,000 households could be packed onto 1,650 acres.

The walkability gap: As Bozeman grows, can it make low-car lifestyles an option?

As you’re reading this, try a quick thought experiment: Picture your home and its surroundings, but subtract the car.

City to hold roundtable on equity, inequality in Bozeman