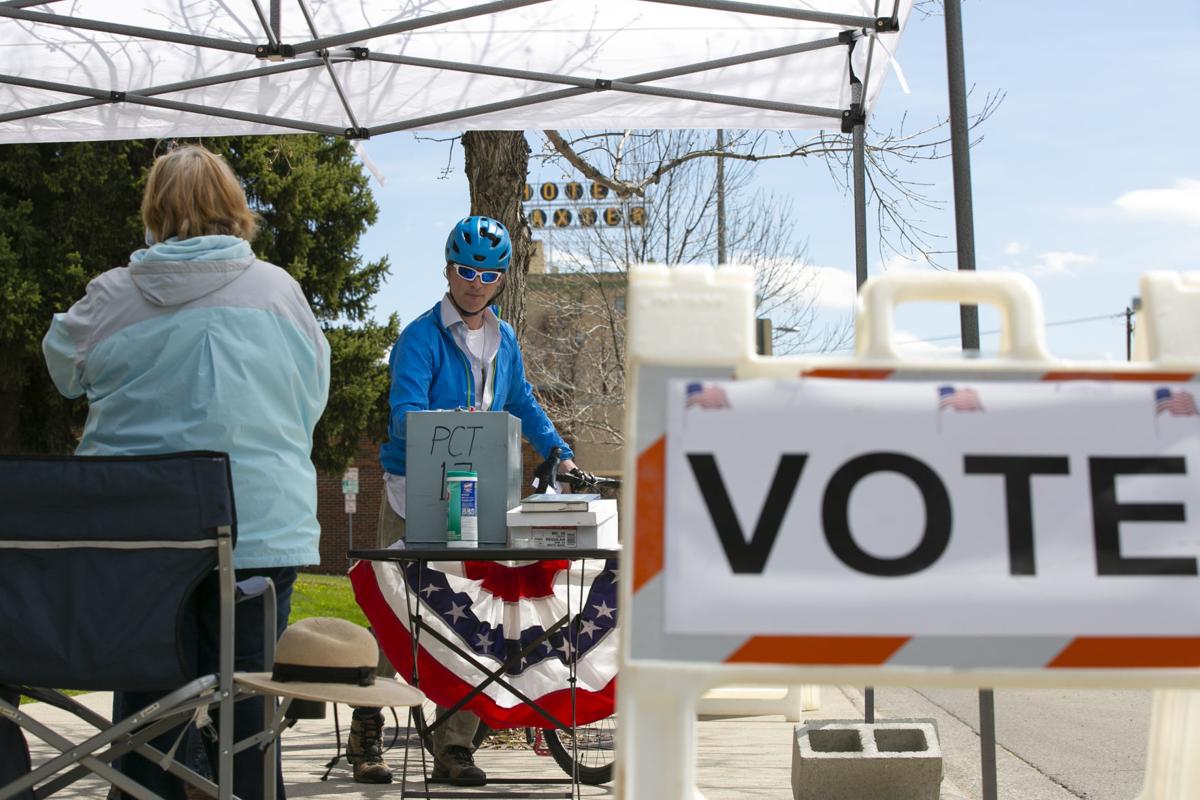 A cyclist rides up the the ballot drop-off location Tuesday, May 5, 2020, in front of the Gallatin County Courthouse in Bozeman. Voters at the location were instructed by two election officials on how to properly deposit their ballot. 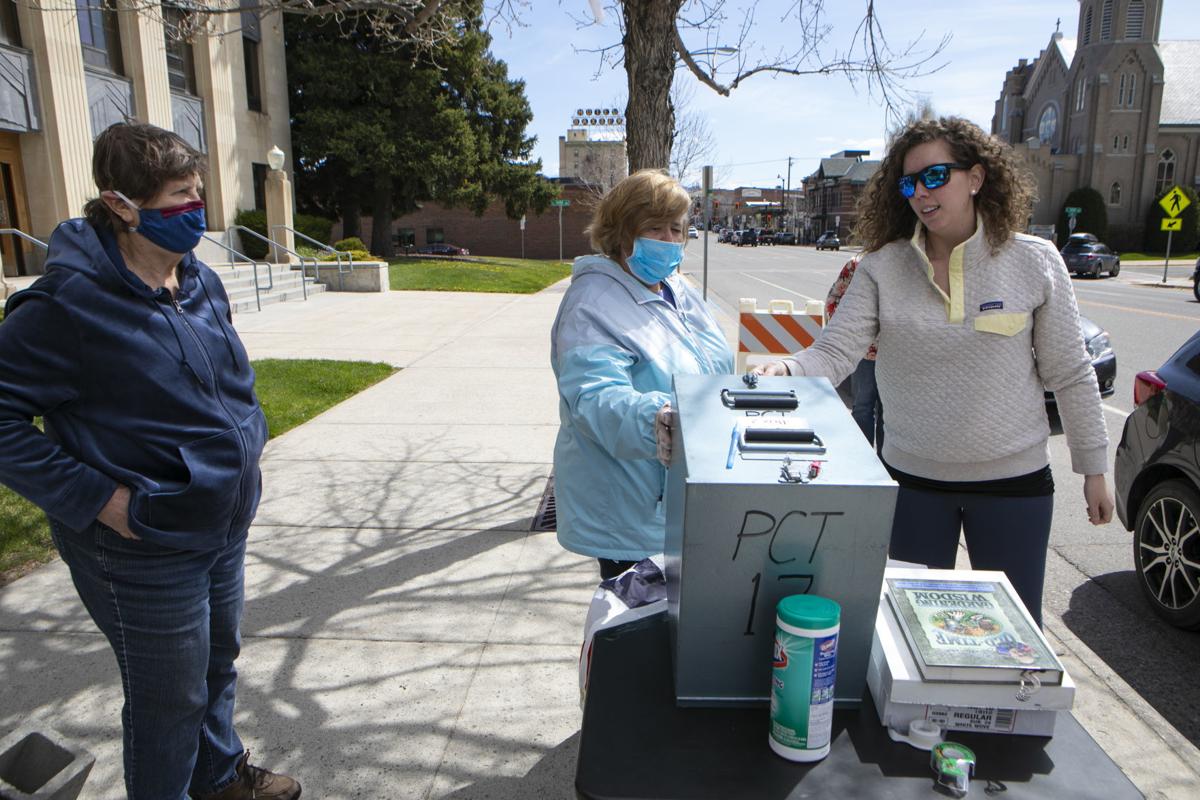 Elizabeth Meyn and Yvonne Jelberg speak with a voter Tuesday, May 5, 2020, at the Gallatin County Courthouse in Bozeman. 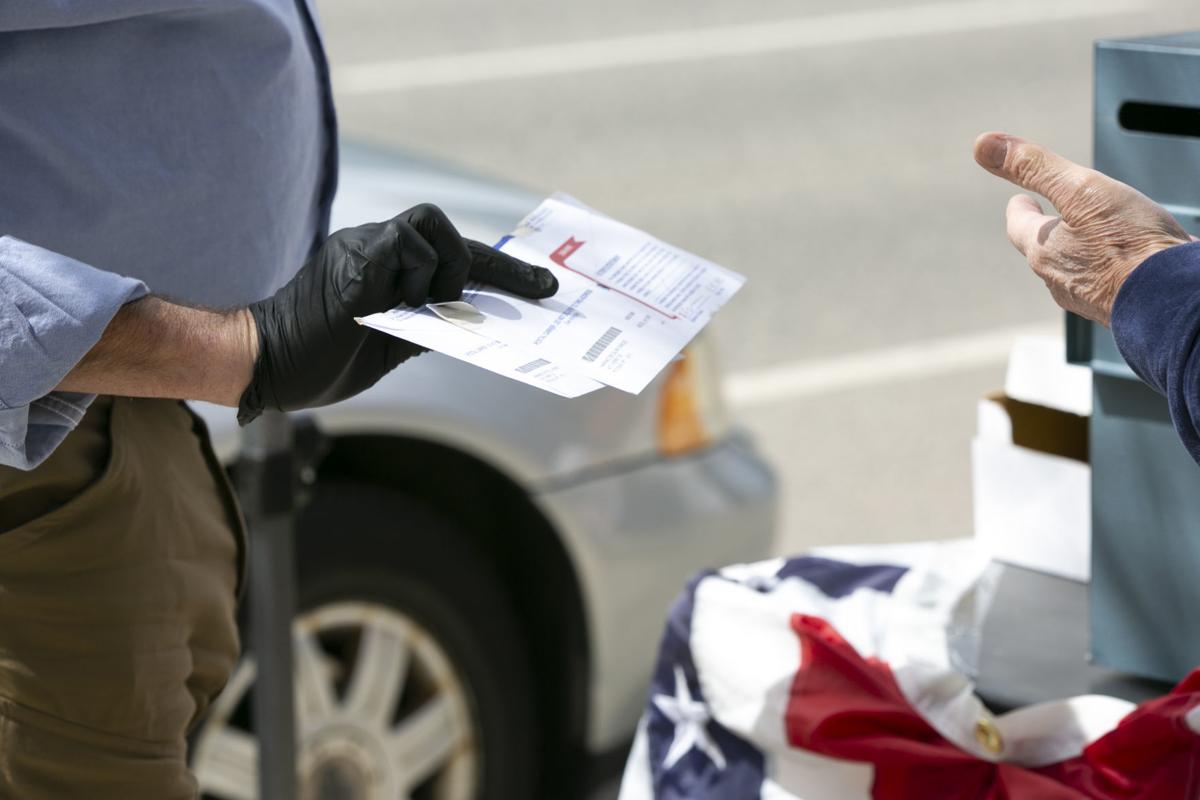 A voter wears black gloves while voting Tuesday, May 5, 2020, at the Gallatin County Courthouse in Bozeman.

A cyclist rides up the the ballot drop-off location Tuesday, May 5, 2020, in front of the Gallatin County Courthouse in Bozeman. Voters at the location were instructed by two election officials on how to properly deposit their ballot.

Elizabeth Meyn and Yvonne Jelberg speak with a voter Tuesday, May 5, 2020, at the Gallatin County Courthouse in Bozeman.

A voter wears black gloves while voting Tuesday, May 5, 2020, at the Gallatin County Courthouse in Bozeman.

Bozeman voters approved a new annual fee in the form of a parks and trails district on Tuesday, a measure that was pitched to help cover a backlog of maintenance for city green spaces.

According to unofficial final election results from Gallatin County election office, the district passed by a wide margin with 61% of voters in favor of the measure and 38% voting against it Tuesday night.

Mayor Chris Mehl said the preliminary results show that voters value conserving outdoor places for future generations. He said that recent events may have highlighted that for people who have had little reprieve from sheltering in place other than to walk outside.

“The Covid crisis reminded us how important our outdoor spaces are to our health and well-being,” Mehl said.

A Bozeman property owner with an average size lot — 7,500 square feet — pays about $80 a year in taxes for city parks. City officials said the parks and trails district will replace that as an annual fee that would increase in cost each year for five years.

The district proposal outlined that an average property owner would pay an estimated $135 in the first year and $184 by the fifth year, but that city officials can change the fee at their discretion.

Mehl said that because of the COVID-19 crisis and subsequent economic recession, those fee estimates are somewhat outdated. As city staff and commissioners draft and consider next year’s budget this spring, they can adjust it, Mehl said.

“We will be sensitive to the economic reality and other tax burdens during these times,” Mehl said.

Mehl said these budget discussions will also likely determine how soon residents might see the impacts of the parks and trails district.

The city collects other fees through districts, like for tree and street maintenance.

City staff estimate there’s a maintenance backlog for parks that will take $7 million and 10 years to fix. That’s projected to increase to $13 million by 2028. Bozeman has 921 acres of parks and 62 miles of trails.

Bozeman city commissioners voted 3-2 last December to put the district on Tuesday’s ballot. But after the spread of the novel coronavirus became a global crisis, city officials decided to forgo spending the planned $24,000 on educating the public about the issue and wanted to remove it from the ballot

However, it was too late to reverse course.

Interim City Manager Dennis Taylor told the Chronicle in March that the city would have had to remove the measure from the ballot by Feb. 20 under state law. Taylor said the $24,000 was put toward the city’s response to the pandemic instead.

Commissioners Terry Cunningham, I-Ho Pomeroy and then-Mayor Cyndy Andrus voted in favor of putting the district on the ballot in December. Commissioner Jeff Krauss and then-Deputy Mayor Mehl voted against it.

Mehl supported the measure, but voted no in December, saying at the time that the language to be used on the ballot was too confusing. However, after that vote, Mehl was on call to help educate people on the issue.

Krauss opposed increasing fees for taxpayers. He told the Chronicle it would be more responsible for the park maintenance money to come from the general fund and that a new district would not keep the city accountable for taxpayer dollars.

Krauss’ seat has since been filled by Commissioner Michael Wallner.

City commissioners raised the standard for upkeep of city parks in 2018, saying Bozeman falls behind national averages in terms of park spending. This district will aid in that goal. Mehl said the city should be “not a penny below or a penny above” the national standards.

Ultimately, Mehl said, the district is a new tool to collect money for parks and trails maintenance, but that it will be up to city leaders to figure out how to use it.

“It will be a helpful tool, but we have to use it wisely,” Mehl said.