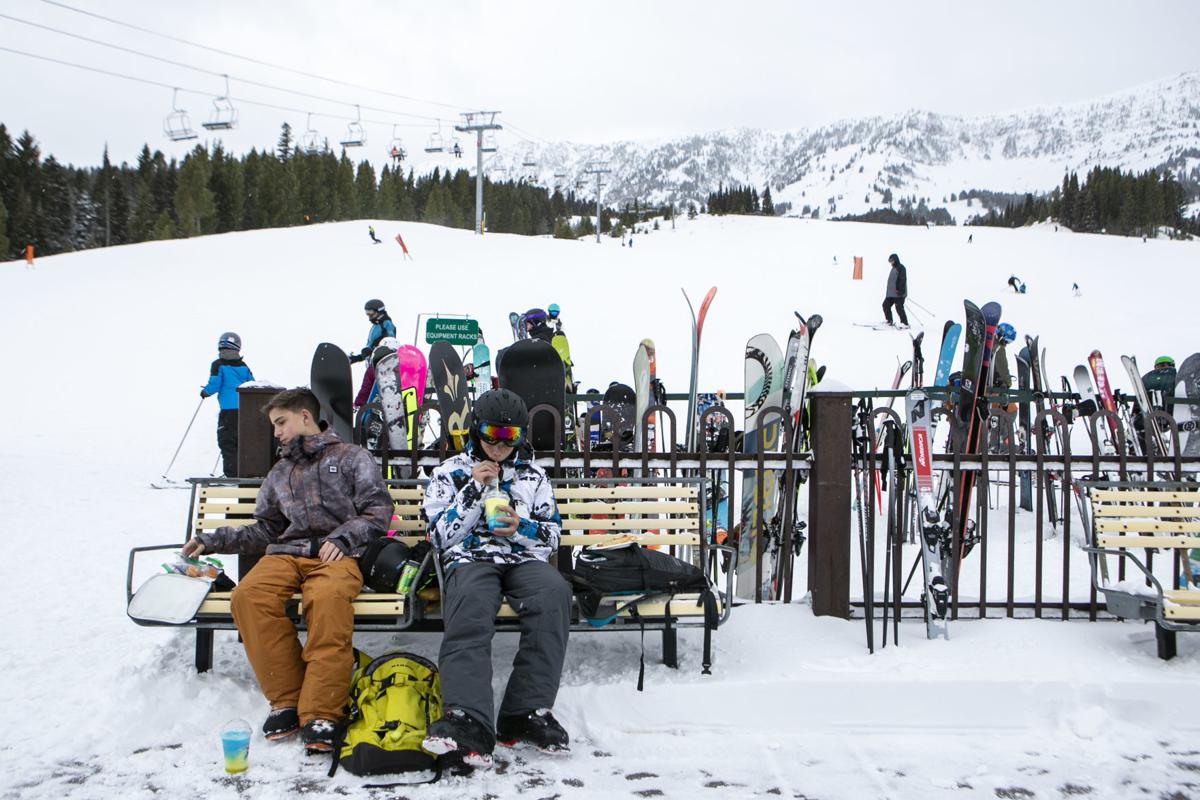 Two skiers have their lunch outside the Jim Bridger Lodge while avoiding indoor crowds Thursday, Jan. 2, 2020, at Bridger Ski Bowl. 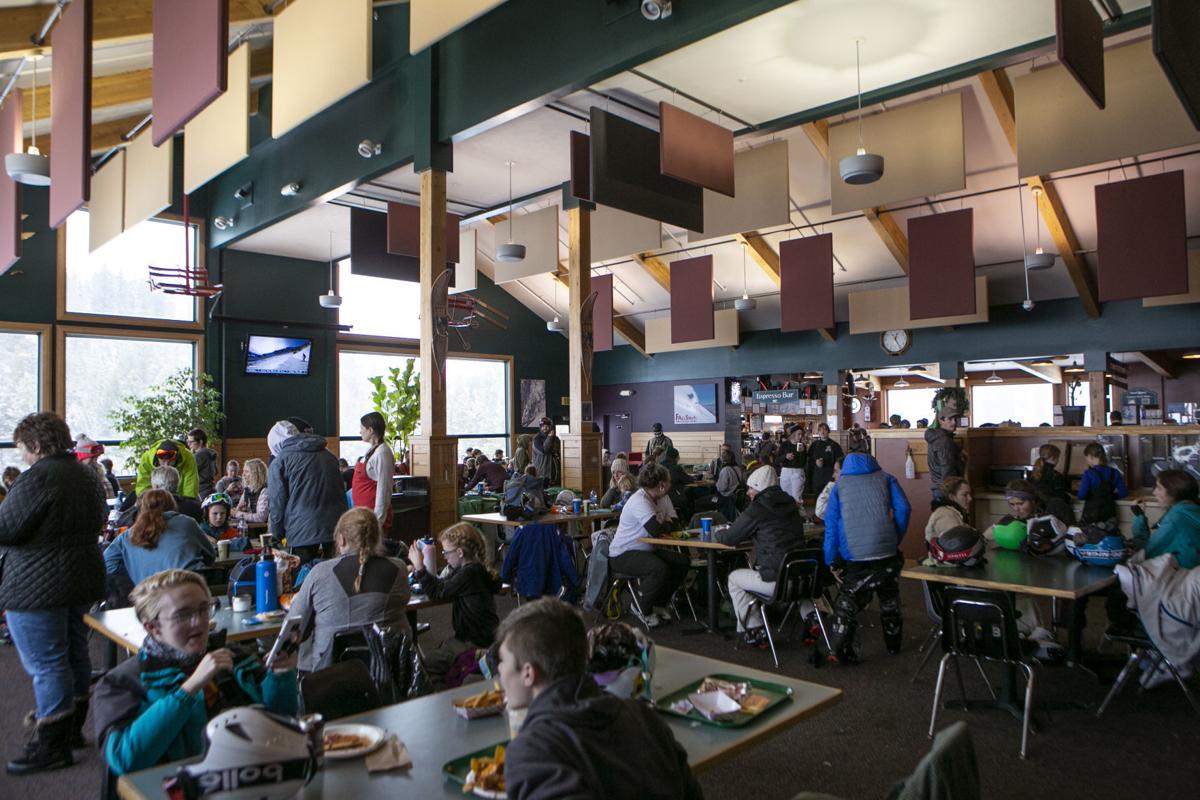 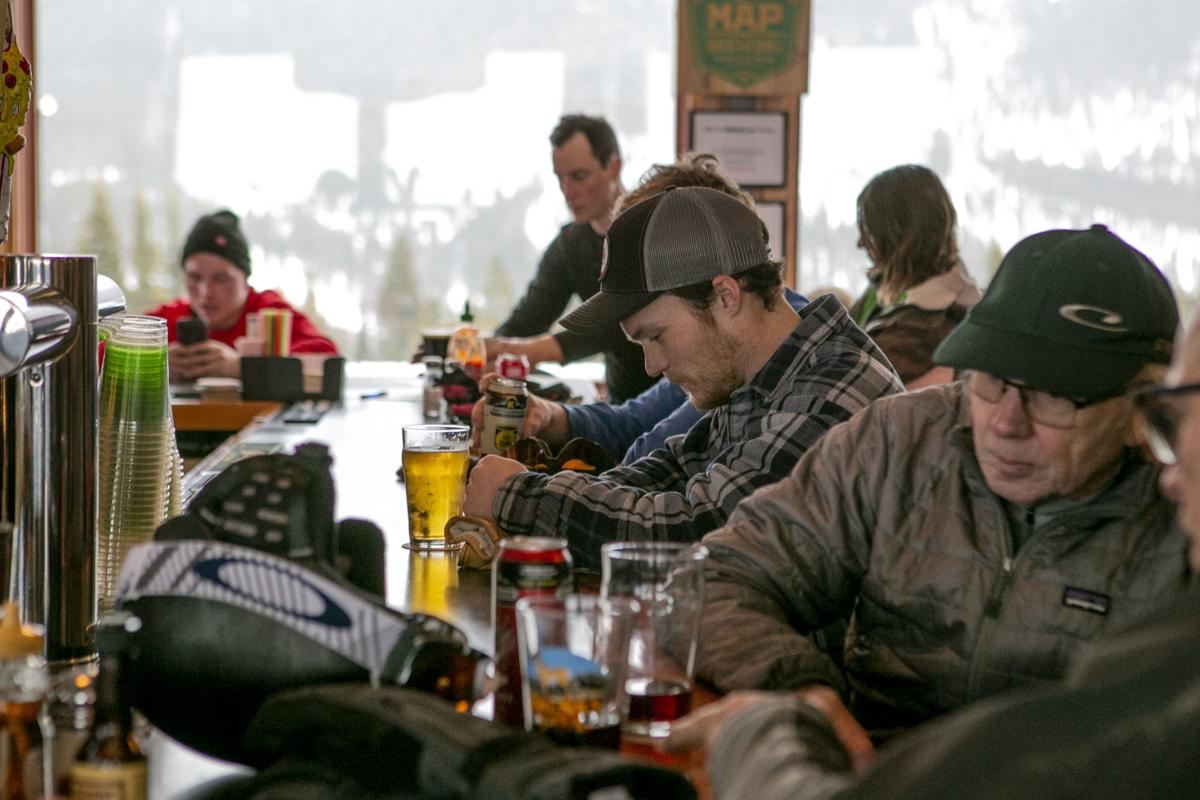 People sit at the bar at the Jim Bridger Lodge during lunchtime Thursday, Jan. 2, 2020, at Bridger Ski Bowl. Open chairs were hard to find during the lunch rush. 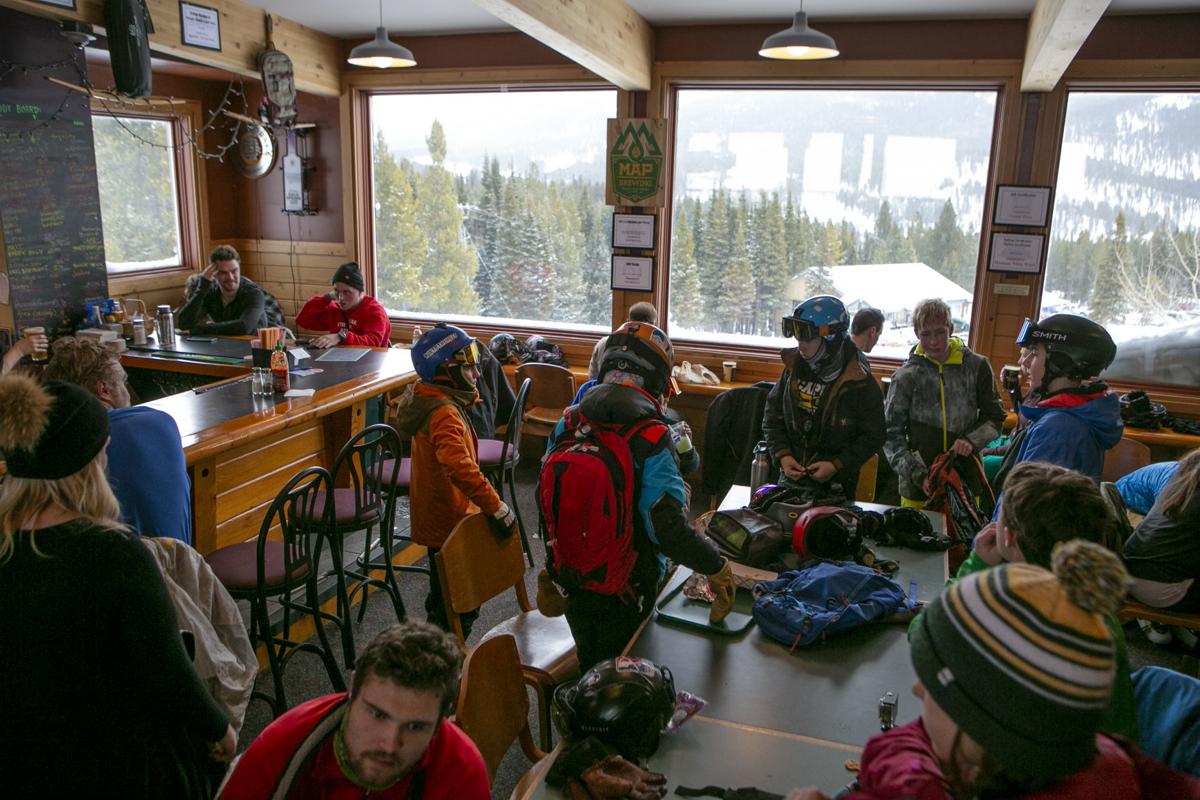 A table of skiers gets up after lunch at the Jim Bridger Lodge Thursday, Jan. 2, 2020, at Bridger Ski Bowl. 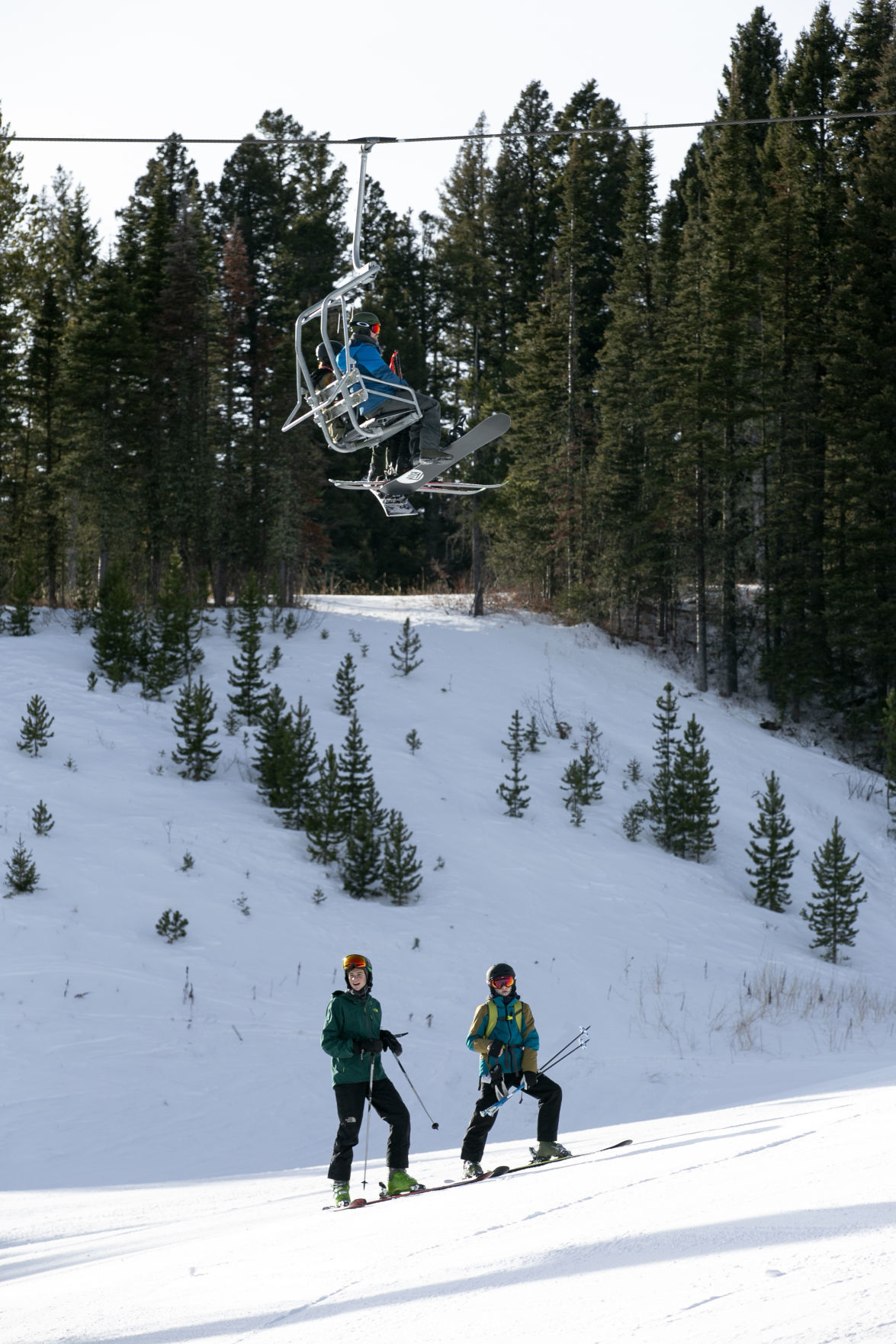 ABOVE: A snowboarder reaches the bottom of the hill at Bridger Bowl Ski Area during opening day Dec. 6. BELOW: Snow coats the high peaks of the Bridger Mountains on Wednesday near Bozeman.

Two skiers have their lunch outside the Jim Bridger Lodge while avoiding indoor crowds Thursday, Jan. 2, 2020, at Bridger Ski Bowl.

People sit at the bar at the Jim Bridger Lodge during lunchtime Thursday, Jan. 2, 2020, at Bridger Ski Bowl. Open chairs were hard to find during the lunch rush.

A table of skiers gets up after lunch at the Jim Bridger Lodge Thursday, Jan. 2, 2020, at Bridger Ski Bowl.

ABOVE: A snowboarder reaches the bottom of the hill at Bridger Bowl Ski Area during opening day Dec. 6. BELOW: Snow coats the high peaks of the Bridger Mountains on Wednesday near Bozeman.

Marshall Bennett used a rope tow the first time he skied at Bridger Bowl Ski Area in 1955. Since then, the mountain has become like a second home.

Bennett helped build the first T-bar there. He was on Montana State College’s ski team, which led to him becoming a volunteer patrolman and instructor at Bridger. It’s where he made lifelong friends and met his wife, Luzann, who took a lesson from him when she needed to get P.E. credits.

At 81, Bennett still skis Bridger as often as he can, although maybe not quite as hard as when he was a ski racer.

In the 1980’s, Bennett was on Bridger’s board of directors and dealt with challenges like expanding the hill’s access to new terrain, obtaining a liquor license and raising ticket prices. Some people wanted Bridger to remain exclusive, but that was not the board’s goal.

“Bridger was established as a nonprofit to provide skiing for Bozeman and local people, and the mission has always been to provide quality skiing at a reasonable price and to be very much family-oriented,” Bennett said.

Bennett has seen Bridger evolve through financial woes, public controversies and Bozeman’s growth. Today, the mountain hosts 11 chair and surface lifts on 2,000 acres. The number of visitors grows each year and the ski area continues to develop with it.

The U.S. Census Bureau in 2018 ranked Bozeman No. 1 on a list of top growing cities under 50,000 people in the country. While that has led to a strong economy, it’s also led to some growing pains — a workforce shortage, rising property taxes, a lack of affordable housing.

Bridger Bowl, 16 miles from downtown, is not immune to the strain.

“The running joke with the people who have been around here for awhile is that (Bridger) is getting loved to death,” General Manager Bob Petitt said.

Bennett described Bridger as a victim of its own success.

Of course the increase in season pass-holders and visitors is good for business. It put Bridger on solid financial ground and has helped the ski area pay cash for expansions over the years.

The ski hill has been able to completely redesign its beginner area, upgrade its wastewater system, open new lifts, build a new lodge and purchase a 160-panel solar array over the past 20 years and is debt-free.

But Bridger hasn’t always had that kind of financial stability.

Terry Abelin, who was general manager of Bridger from 1980 to 2004, said Bridger was in serious debt when he started that job. Lift tickets sold for about $5 and revenue did not cover operating costs. The ski hill made the unpopular decision to raise prices, but it ultimately dug the nonprofit out of debt and set a solid foundation.

Now on the flip side, Bridger’s challenged with accommodating more people while maintaining its culture as a local ski hill.

Bridger’s most pressing issues are its limited parking, lodge space and excessive traffic on Bridger Canyon Road. Petitt said the mountain itself can handle the crowds, but the infrastructure can’t. The nonprofit has plans for expanding skier services, but Petitt said he wonders how long that will ease overcrowding if Bridger continues to grow the way it has.

“Quite frankly, I really don’t know what we’re going to do to control the number of people,” Petitt said.

Last season, Bridger had nearly 300,000 skier visits. That’s 50,000 more than the previous season, which had 25,000 more visits than the year prior to that. Season pass sales have also continued to increase.

Bridger’s parking lot acts as crowd control now. Once full, it forces visitors to turn around. That’s only happened once in the past few years because, Petitt said, more people are taking the free shuttle service and carpooling. But visitation numbers suggest an overflowing parking lot could become more common.

Part of the ski hill is on U.S. Forest Service land, which requires a special use permit. That permit outlines a design capacity for Bridger with a daily maximum of 6,100 people given the capacity of skier services like parking and number of lifts. Visitation numbers are creeping toward that limit. On Christmas Day in 2018, 5,500 people skied at Bridger.

Other ski resorts have increased ticket prices or capped season pass sales as crowd control. Some charge for parking or transportation. But those solutions don’t fit Birdger’s ethos.

Bridger offers free parking, a free shuttle service from town and tries to keep prices affordable. A board oversees all operations and the base area is free of high rise hotels.

Mark Manseau, president of Bridger’s board and a Bozeman native, said these things make Bridger what it is.

“Being a community-owned, nonprofit ski area — that keeps our focus on seeing to it that we maintain that culture,” Manseau said.

Manseau has served on the board for six years now. He said that conversations about accounting for Bridger’s growth while maintaining its identity have dominated his tenure.

“That’s a huge priority — to maintain that feel of who Bridger Bowl is — and it quite honestly is becoming more and more difficult to do as Bridger has grown. But it continues to be the number one priority,” Manseau said.

A prime example of that conflict is the possibility of lift service to Bradley Meadows. The meadows north of Bridger’s boundaries have long been popular among backcountry skiers who skin up there for seclusion and fresh powder. Adding a lift would expand access and give the mountain a little breathing room, but would likely turn Bradley Meadows into a mogul field, Manseau said.

Bridger has been given the green light to build a chairlift there, but has no imminent plans to do so. Manseau said it will be one of the hardest decisions the board will have to make in the future.

It’s also the kind of conversation that makes a nonprofit ski hill unique. As Bridger Bowl updates its master plan in the coming year, Manseau said it will gather input from longtime pass-holders, visitors and employees alike, which he refers to as the Bridger family.

No matter what, changes are coming.

Petitt said construction on a new Jim Bridger Lodge, built in 1988, will begin sometime in the next five years. The new building will be bigger and closer to the parking lot, making it more accessible.

Bridger is approved to build more parking, but isn’t sure where that will happen yet, Manseau said. Petitt said the free bus service, which costs Bridger about $250,000 annually, will be expanded in the coming years. Shuttles, either Streamline or First Student busses, stop at the Gallatin County Fairgrounds and Montana State University about every 15 minutes on the weekends. Petitt said he’d like a weekday service, too.

As for improvements to busy Bridger Canyon Road, those will have to come from the Montana Department of Transportation, which released a list of recommendations for the highway in 2015.

Petitt said sustainability will also continue to be a major priority for the ski hill.

Petitt likens his job to being a snow farmer. All the planning for expansion is contingent upon snow bringing in skiers and revenue, and Petitt said he’d like to do what he can to protect it.

Looking to the future, the ski hill may change in size, add amenities and update as new technologies become available, but Manseau said he hopes he’ll recognize the place he’s known since he was a teenager.

He also hopes it will always be known as the local hill.

“In 20 years, I want to see my great grandchildren being able to come and enjoy the same mountain that I’ve enjoyed my whole life,” Manseau said.

This story has been updated to correct the spellings of Marshall Bennett's and Bob Petitt's names.