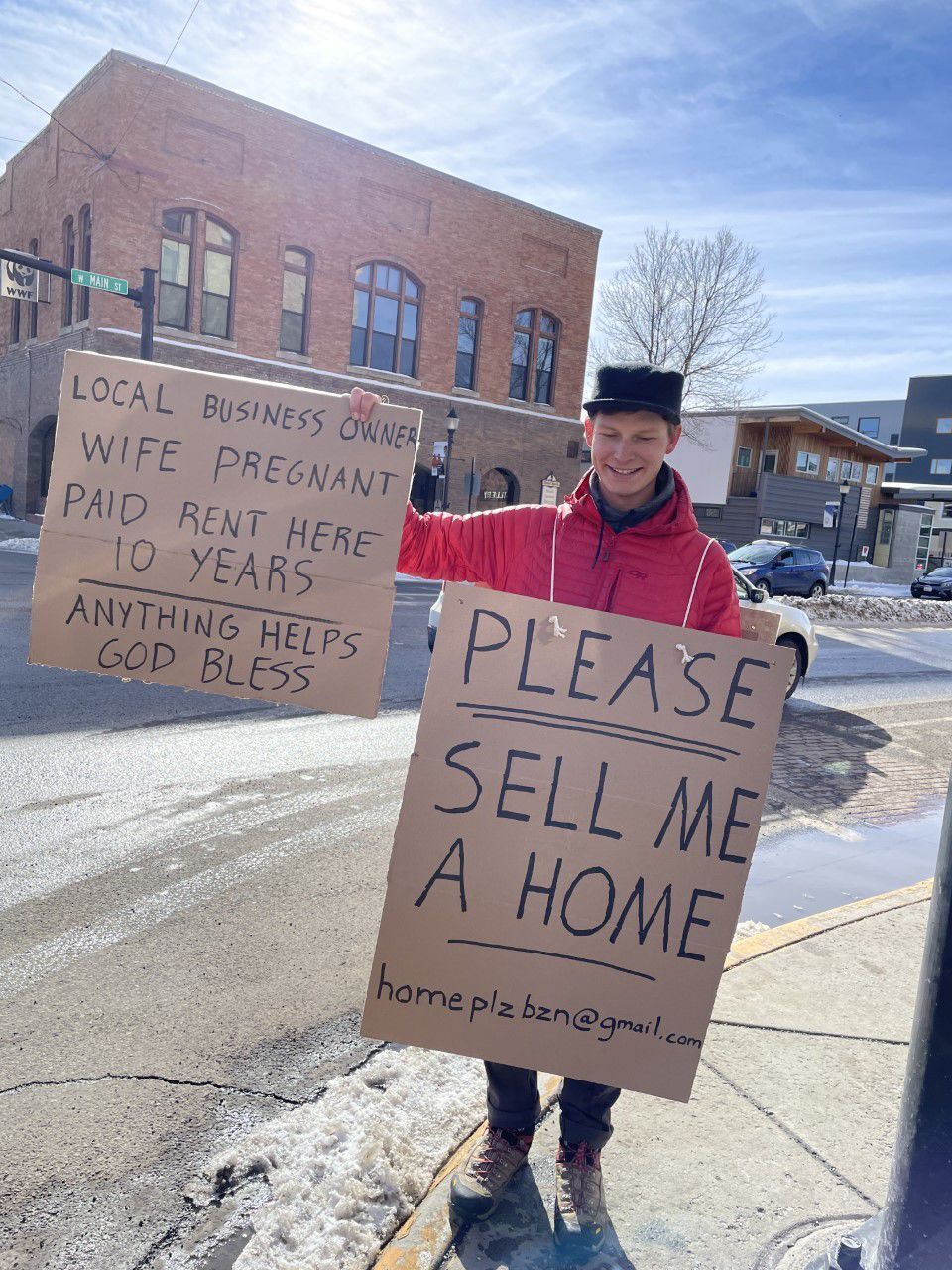 Sean Hawksford took to the corner of Main Street and Willson Avenue in Bozeman, Mont., last week to make a plea for someone to sell him a home. 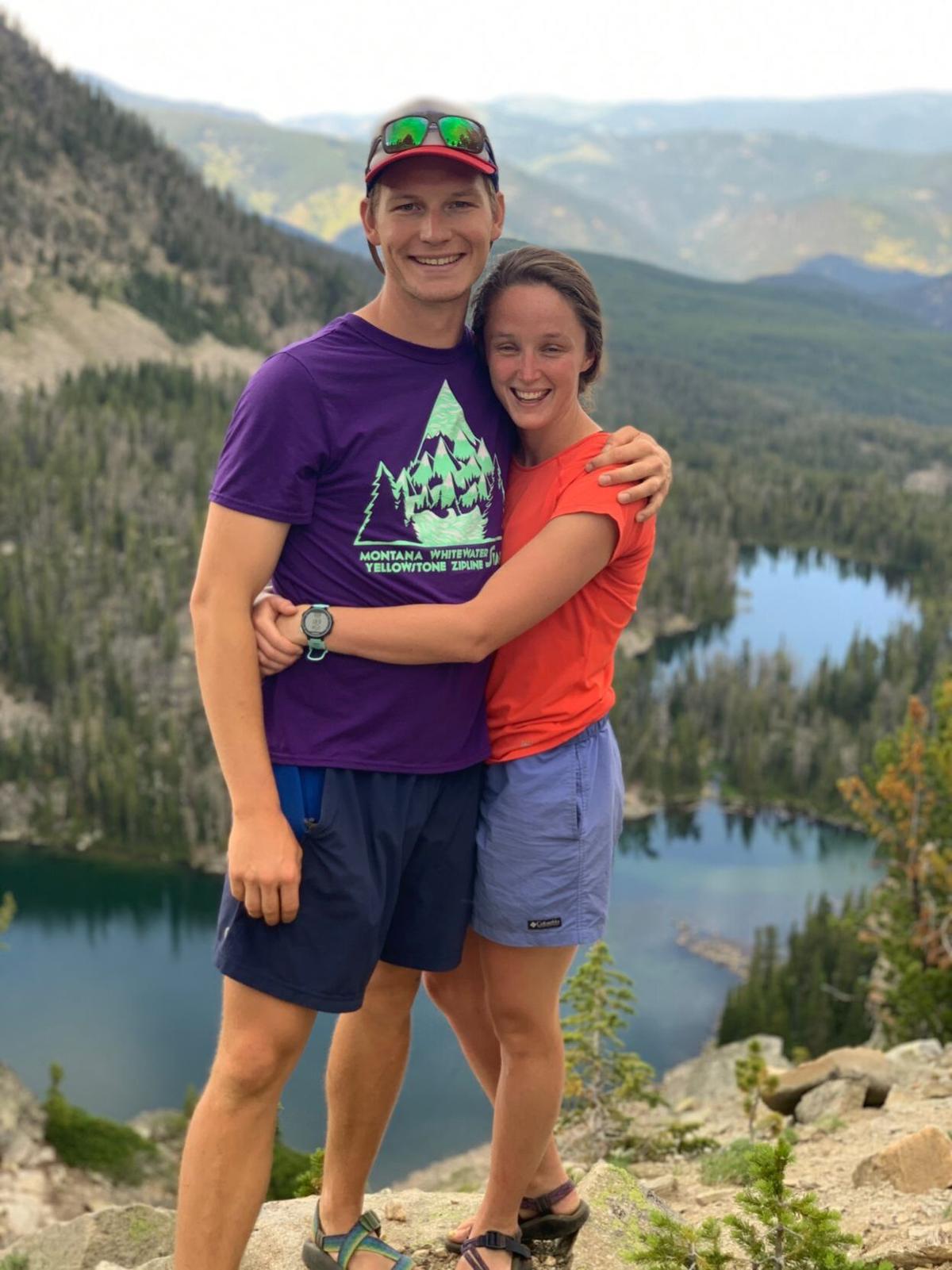 Sean and Jessica Hawksford. The couple has spent months looking for a home in Bozeman.

A Bozeman business owner frustrated by the city’s nearly impossible housing market took his search to the streets last week with a sign begging people to sell him their home.

For months, Sean Hawksford has been glued to his phone, checking Zillow every few hours to see what new listings are available in Bozeman. He and his wife, Jessica, are expecting a baby in June, and find it increasingly urgent to move out of their small one-bedroom, $1,000-a-month apartment in the ground floor of a 100-year-old house north of downtown.

With Hawksford’s drywall business benefiting from Bozeman’s housing boom, they have the money for a decent down payment and the financing. They started their housing search in August and have visited nearly 30 homes and made 18 offers.

So far, they have nothing to show for it.

The search has been exhausting and consuming.

“I don’t feel like Bozeman owes me a home,” Hawksford said. “But we want to invest and we want to be part of the growth of Bozeman, rather than just continue to live here and pay rent indefinitely.”

At first, Hawksford said they would get emotionally attached to the homes they made offers on, imagining themselves moving in already. As their search went on, they became more and more jaded. Hawksford compared it to how a fan of a struggling sports team may be upset by the first couple losses of a season, then start laughing as a losing streak goes on.

But the search took on a new urgency when Jessica went in for her 20-week ultrasound. The Hawksfords found out they are having a baby boy, and got to see their baby’s face on the ultrasound.

His mind went into overdrive with parental nesting instincts, thinking about how to set up a crib or what color to paint the nursery. The problem, Hawksford said, is he found it difficult to imagine doing any of that nesting in their current apartment.

He was lying in bed that night when it occurred to him that he’d done just about everything but outright beg for a house. He thought, for a bit, that maybe he would try just that by holding a sign out on the street.

Hawksford quickly dropped the idea. Then another one of their offers was rejected a few days later.

“I was like, ‘You know what, why not?’ What else am I gonna do?” Hawksford said.

So out came some cardboard and a marker, and, a week after seeing his son’s face for the first time, Hawksford was standing on the street wearing a sign saying “Please sell me a home.” In his hands he held one that said “sell to a local” on one side and “Baby due in June, Living in 400 Sq. Ft., Any leads help, God Bless,” on the other.

Hawksford admits he’s not even technically a local — though Jessica grew up in Bozeman and is a Bozeman High School graduate, Sean grew up in Minnesota and came to attend Montana State University about a decade ago.

Since then, though, Hawksford has become a local in pretty much every way: He’s a business owner, Jessica’s family is in town, and the couple is involved in their faith in the community.

Like many — locals or not — who make Bozeman home, the Hawksfords love the outdoor recreation the area has to offer. But Jessica Hawksford said they have come to appreciate the people of Bozeman more than anything.

“More and more as we get older, the people are what matter the most to us,” Hawksford said. “So that’s why we want to stay and why we are so diligently pursuing a house to live in here.”

Only 26 and 27, the Hawksfords know they are lucky to even have the option of purchasing a home: They are qualified to buy in the $500,000 range, and they have financing options. But even that seemingly isn’t enough in an already tight housing market in Bozeman that was catapulted into further chaos by COVID-19.

“What really dismays me is that we’re having such a hard time with this ... and there’s many, many, many other people who are behind us in line because they haven’t had as many breaks go their way as we have,” Hawksford said. “Like if we don’t stand a chance, they stand zero chance.”

While housing costs are skyrocketing, supply hasn’t kept up. According to the Gallatin Association of Realtors, the median cost of a single-family home in Gallatin County increased by almost 25% to $560,000 from January 2020 to this January, while inventory dropped 66.8%.

For the Hawksfords, one of the most frustrating aspects of their fruitless search has been that often, they haven’t even lost out to a higher offer. They’ve lost out to people who can pay with cash.

“We have the money, we’ve worked really, really hard and been super disciplined to save and be able to buy a house,” Hawksford said. “So really what drove me ... like literally onto the street corner to ask people, please sell me a house is not because we can’t afford it or not because we haven’t tried other avenues already. But we have the income, we have the financing, we have the savings. We want to be here we want to invest in the community.”

Hawksford has received quite a few emails from the address painted onto the sign. Most were from real estate agents offering to take him on as a client. He got a handful from people who are selling their homes.

But he also got a few from people who perhaps view him as an “entitled millennial,” Hawksford said. One telling him he should just get out of Bozeman and move to Butte. Another telling him, essentially, to go back where he came from.

What Hawksford wants those people to understand is how taxing his situation is.

“Telling anybody who can’t afford to be here to go move to Butte, or go move, leave and go somewhere else is kind of speaking of a position of entitlement,” Hawksford said. “It’s saying like, I don’t have to leave my community, my friends, my family, my church, my coworkers, everything that I’ve known, but you do, because you’re younger or you’re less wealthy and you just aren’t as good as I am.”

Photos of Hawksford were shared around on social media, and he doesn’t mind becoming a lightning rod for the housing conversation. He doesn’t want his signs to be seen as antagonistic to people moving into Bozeman from elsewhere.

Rather, Hawksford hopes home sellers start taking a bit more into account when deciding on a buyer.

“Ask yourself, as you’re selling your property: ‘How does the decision that I make to sell this property to this person, change the course of what this community looks like?’” Hawksford said. “I think that it’s really kind of a tragedy of the housing crisis that people are unwillingly being forced out of a place that they actually belong to.”