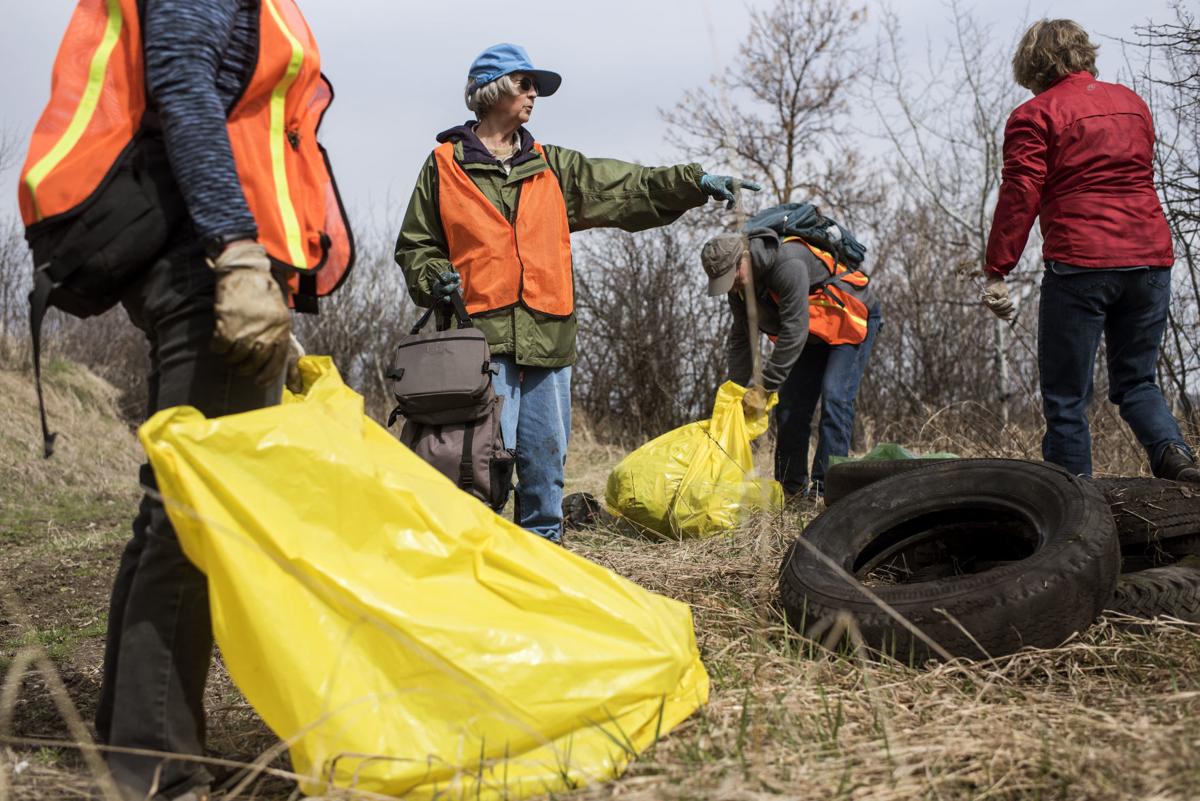 TOP: Sacajawea Audubon Society volunteer Lynn Mugaas points toward a gully where they were working at the Inderland Audubon Wetland Preserve. Forty community volunteers helped clear the wetland on April 27. ABOVE: Stuart Jennings drives around picking up garbage. 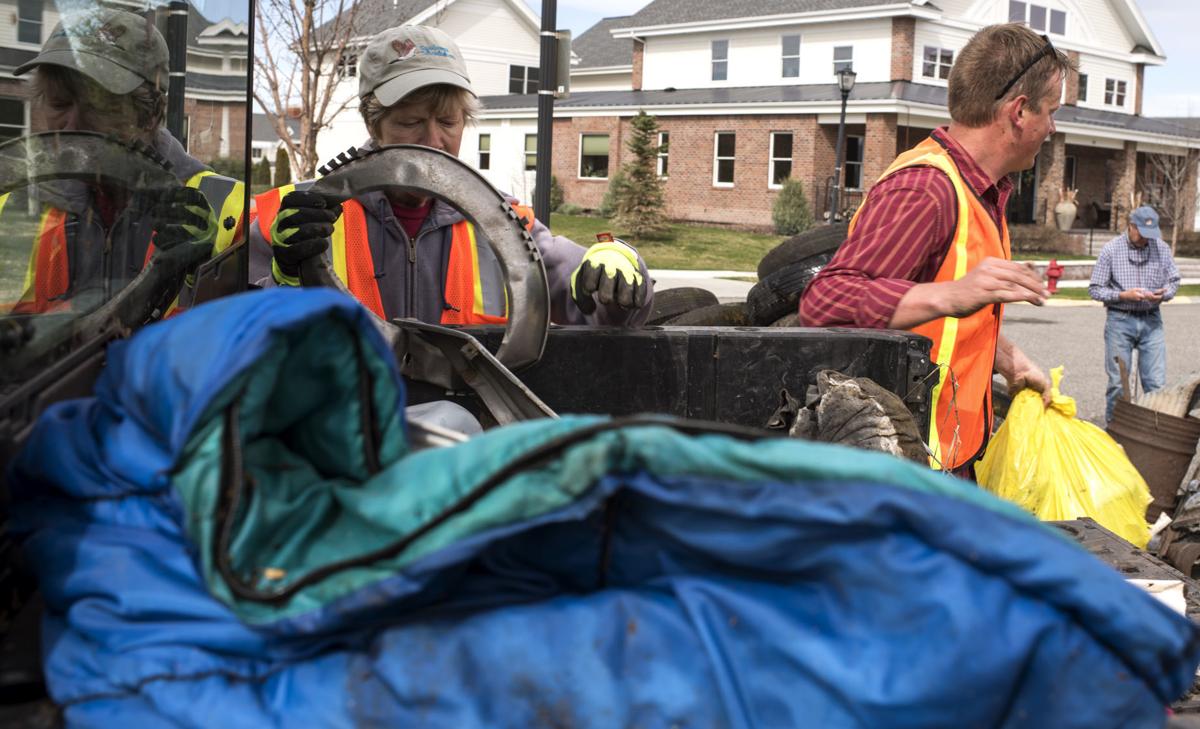 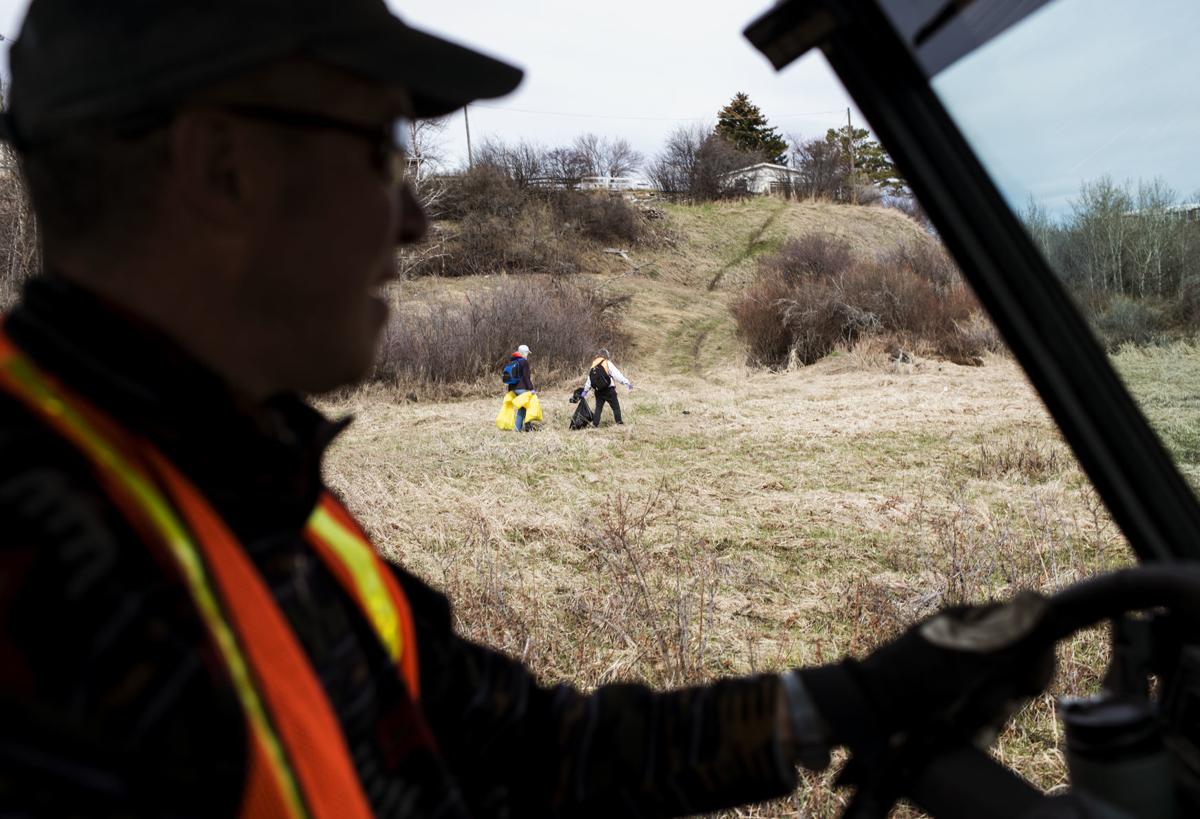 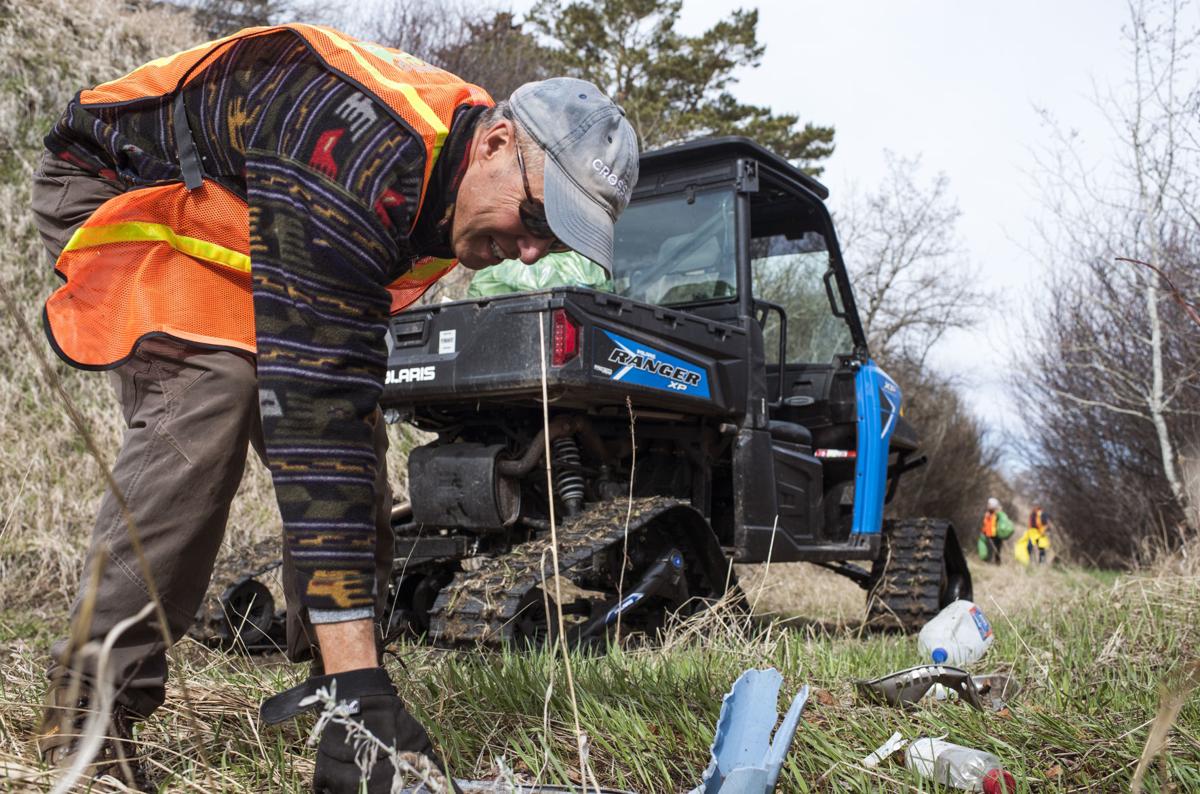 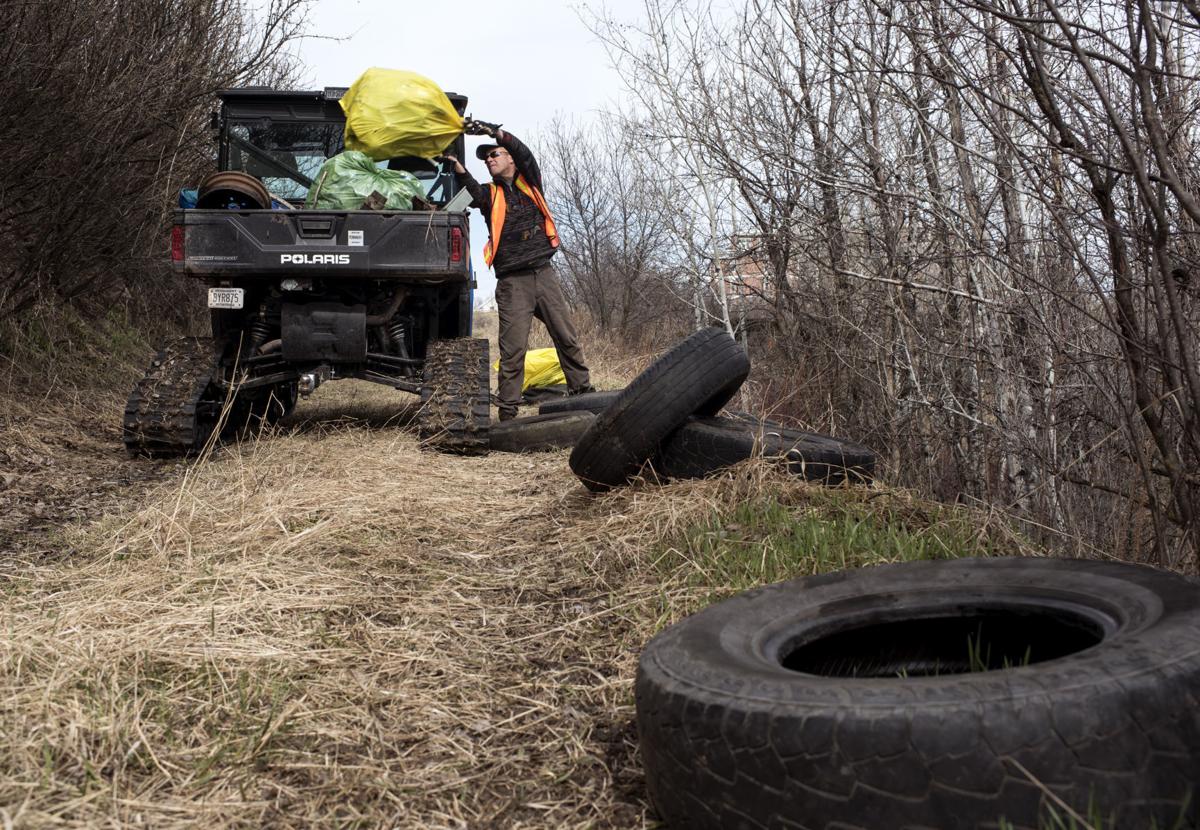 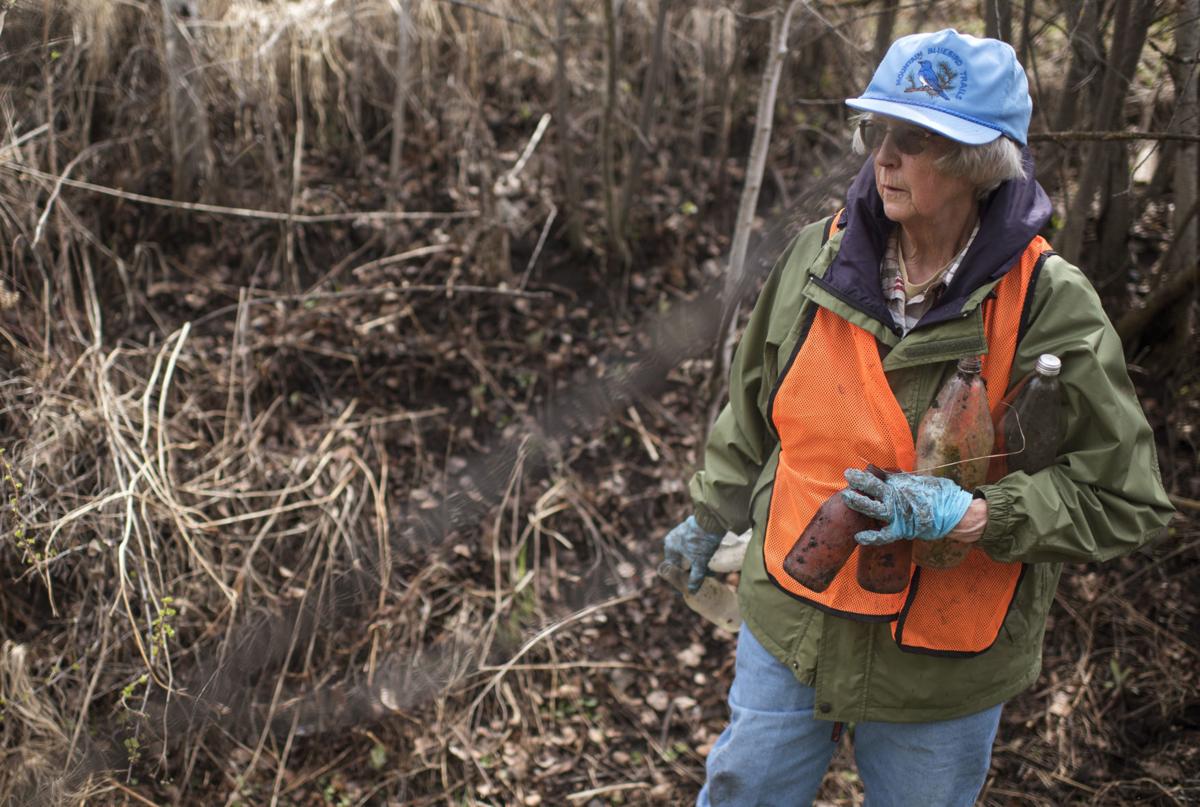 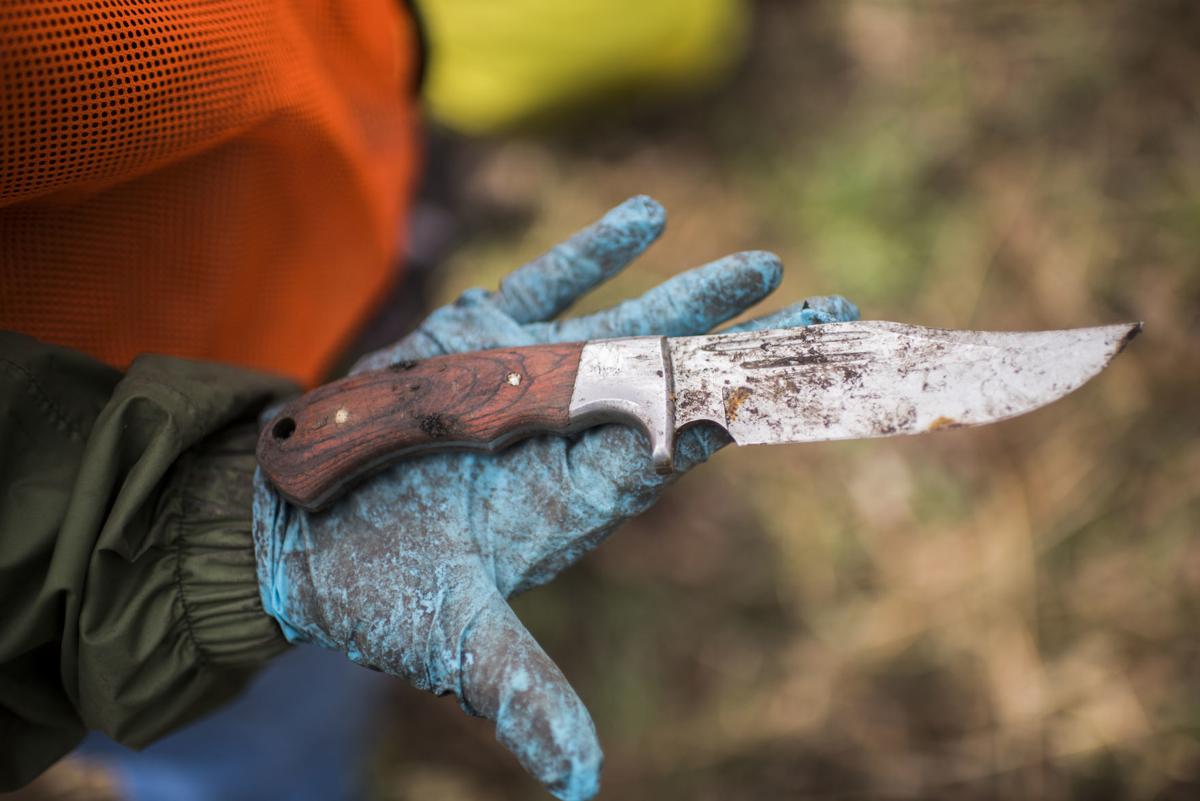 Sacajawea Audubon Society volunteer Lynn Mugaas holds a knife she found buried under a layer of dirt in a gully at the Inderland Audubon Wetland Preserve. Forty community volunteers helped clear the wetland on April 27, 2019. 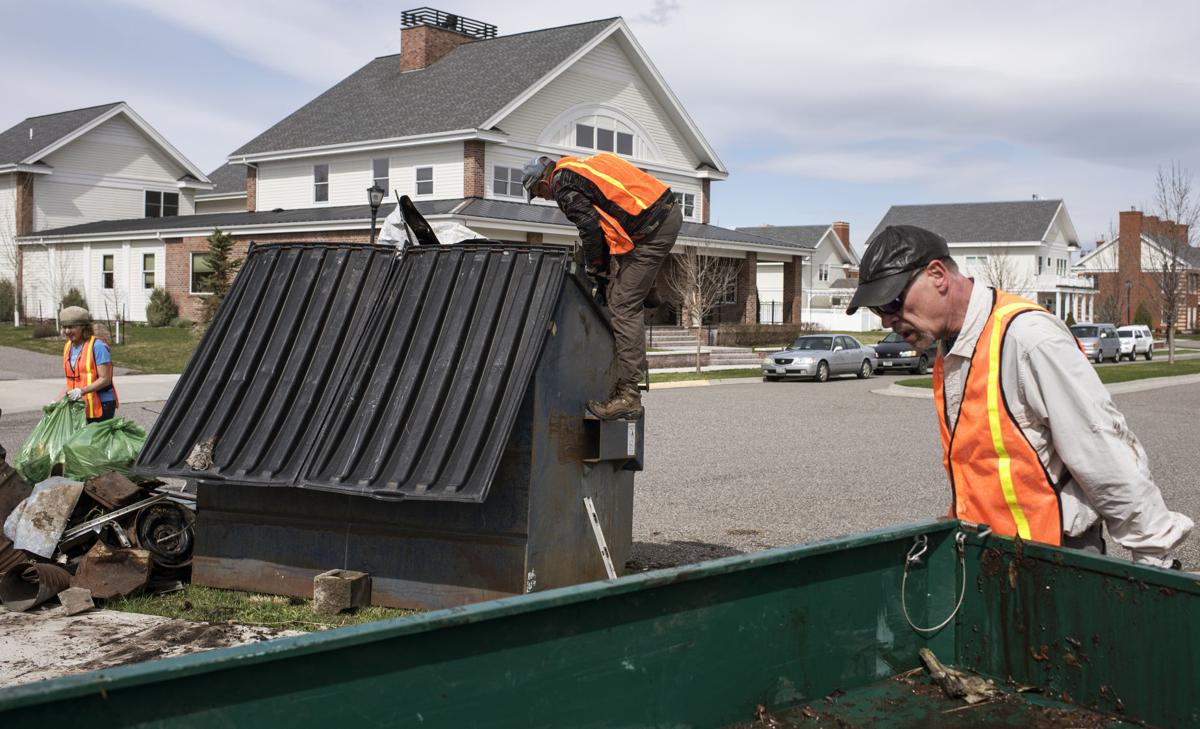 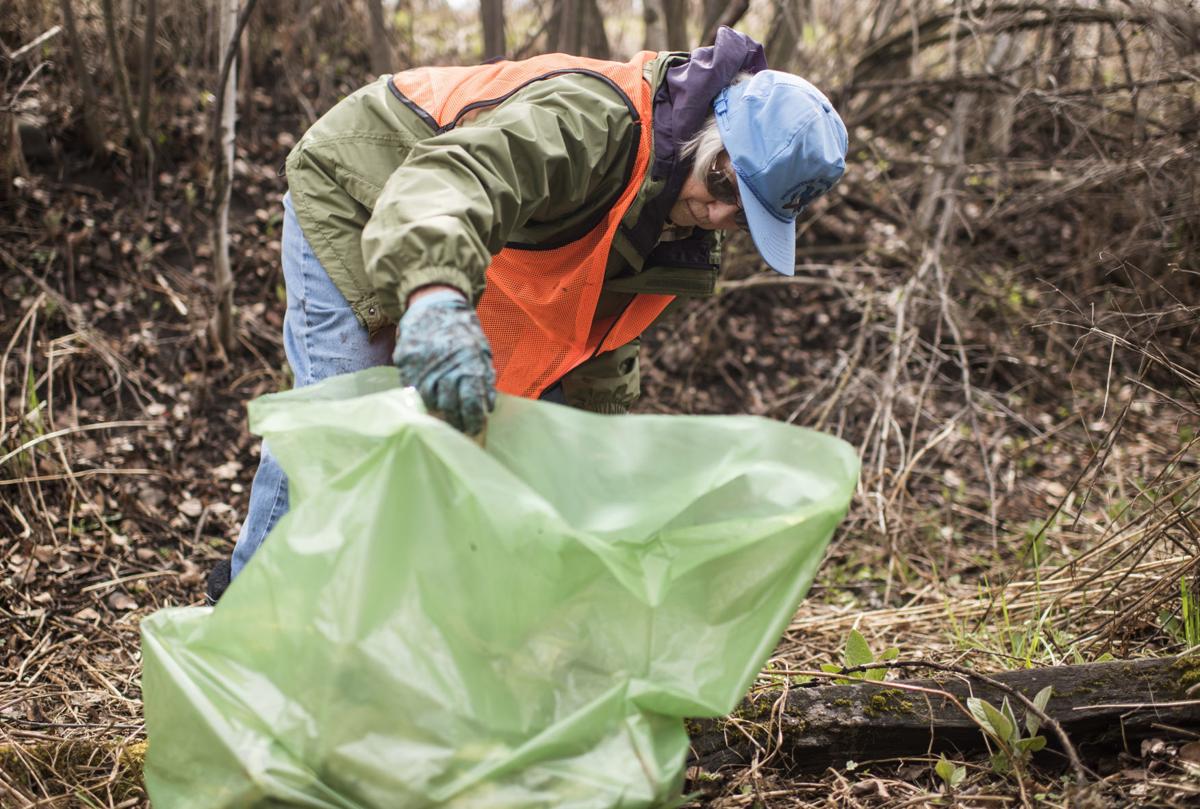 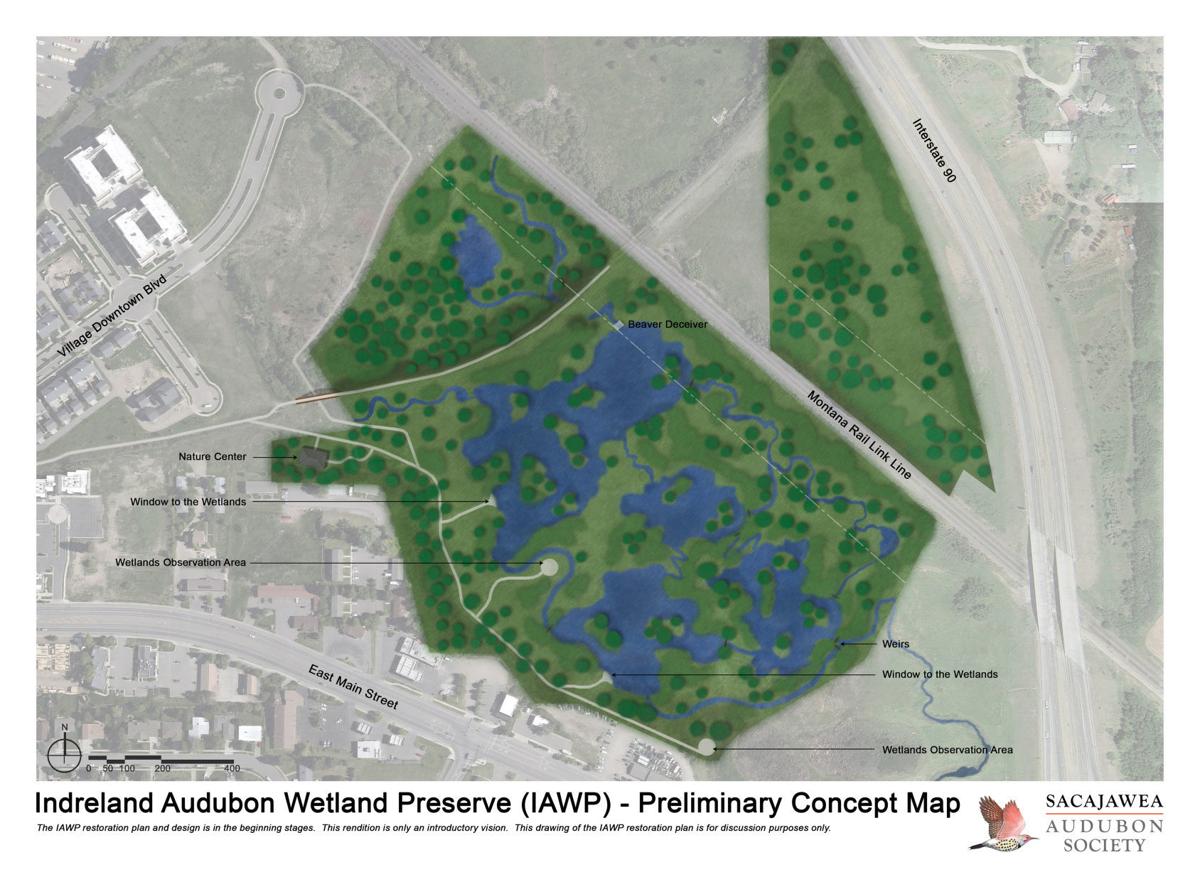 TOP: Sacajawea Audubon Society volunteer Lynn Mugaas points toward a gully where they were working at the Inderland Audubon Wetland Preserve. Forty community volunteers helped clear the wetland on April 27. ABOVE: Stuart Jennings drives around picking up garbage.

Sacajawea Audubon Society volunteer Lynn Mugaas holds a knife she found buried under a layer of dirt in a gully at the Inderland Audubon Wetland Preserve. Forty community volunteers helped clear the wetland on April 27, 2019.

To most folks it might look like an overgrown, marshy weed patch, but to Bozeman bird lovers it’s a thing of beauty — or it will be by the time they get done with it.

The Sacajawea Audubon Society announced Friday that nearly 32 acres of vacant land in northeast Bozeman near Interstate 90 has been donated to the nonprofit by developers Mike Delaney and Ileana Indreland.

Instead of being drained, dried up and developed with housing, the land will be developed by the Audubon group into a nature sanctuary — a home for birds and wild creatures and a place where children can learn about nature.

They call it the Indreland Audubon Wetland Preserve.

Their big dream is to transform it into a nature preserve as attractive as the Kathryn Albertson Park in downtown Boise, Idaho.

“We’re elated with this,” said Chris Nixon, an Audubon board member and chair of the wetlands preservation project. “This has been a personal goal of mine for 20 years.”

Already, Nixon said, “the beavers and beaver babies are back.”

“I’m ecstatic,” said Billy Burton, a fellow board and wetlands committee member. “Not only for the ecological benefits and preserving habitat, but offering educational benefits with such close proximity to Bozeman.”

Once restored the wetlands can be beautiful, Burton said, and also serve an important function by cleaning the water flowing into the East Gallatin River.

“We want it to be the crown jewel of Bozeman,” he said.

Indreland said she feels “fabulous … really good” about the donation. She and her husband want their properties to have enduring value, she said, so that “when we’re gone from this Earth, others will enjoy it.”

“I come from a farm and ranch family, we always valued the land,” Indreland said. “My grandparents were Norwegian immigrants who homesteaded by the Crazy Mountains. We’ve always appreciated Montana — what we have is so special. It’s a really nice way to have a legacy honoring the pioneers.”

Once wetlands covered a wide area from Rocky Creek through Bozeman and out toward the Missouri River headwaters.

When William Clark’s half of the Lewis and Clark expedition journeyed through here in July 1806 on their way back from the Pacific Ocean to St. Louis, Clark wrote in his journal of “emence quantities of beaver … and their dams (which) very much impeed the navigation.”

This wetlands is one of the last remnants, said Loreene Reid, Sacajawea Audubon past president.

For centuries Americans viewed wetlands as worthless swamps and mosquito breeding grounds, and they worked hard to drain and build on them.

“Since colonization well over half of America’s wetlands have been destroyed and lost,” Burton said.

Attitudes started to change in the 1960s with the rise of the environmental movement. The Clean Water Act of 1972 offered protections, requiring that if wetlands were drained and filled, they would have to be replaced elsewhere. But there were many loopholes, Burton said, and many wetlands were lost.

Since 2004 Sacajawea Audubon members had put preventing development of Bozeman’s remaining wetlands on their long-range priority list, but all efforts had failed.

Montana State University students had tried to preserve it back in the 1970s, and several environmental, fish and wildlife, and public land groups had tried over the years with previous landowners and all failed.

The city’s original plats had laid out the area to be built with streets and houses. At one point Delaney had plans to build hundreds of housing units there.

“When people said, ‘It’s not going to happen’ — that’s fighting words,” Reid said. “We got together a group to give it one more try.” That was February 2018.

“We invited him to lunch at the Lehrkind Mansion,” Reid said. Nixon has owned and operated the Lehrkind as a bed and breakfast since 1996, and the mansion had become unofficial Audubon headquarters.

Over soup and sandwiches, the birders and developers talked and listened respectfully to each other’s visions — Delaney’s for high-density housing, Audubon’s for preserving wetlands.

“He said, ‘How much do you want?’” Reid recalled. “Chris spread his arms out and said, ‘I want the whole thing!’”

It didn’t take long for Delaney and Indreland to say yes.

“They were great to work with,” Burton said of the developers.

“They were at the right place and the right time,” Indreland said of the Audubon team. They not only had a great vision for the property, she said, but they were well organized and capable of carrying it through. Plus, she said, they were “fun, they care and they’re dedicated.”

“The stars came into alignment to make this happen,” Burton said.

The lesson Reid takes away is “when it’s a good thing to do, don’t quit.”

Nixon said he had first met Delaney years before when the developer was trying to turn an old train depot on East Main Street into the Montana Ale Works restaurant. At a city meeting, Nixon recalled, it sounded like the project would be rejected for not having enough parking. Nixon stood up and said the city would be “crazy” to turn down a project that could restore a historic building and pump life into that sorry end of Main Street. It won approval.

Nixon said Delaney came up afterward and said, “’I don’t know who you are but you’re my new best friend.’”

Delaney is still planning to build housing at the northwest edge of the wetlands, which will remove about 3 acres. But last December the developers signed over nearly 32 acres to Sacajawea Audubon. Some years ago, Delaney valued the land at $1.4 million.

The developers will receive some direct benefits, including a charitable deduction, and Delaney recently told the city the wetlands would preserve views for residents of his property.

The wetlands is bounded by Delaney’s Village Downtown development, Interstate 90, several businesses fronting East Main Street and a 15-acre wetland next to the freeway restored by the Montana Department of Transportation in the 1990s. Montana Rail Link’s tracks and trains run through a section of the property.

A gravel walking path provides public access from North Broadway Avenue along the south edge of the Village development, over old railroad trestles that once supported a spur line. (The trestles have no railings so parents walking there with young children should keep an eye on their kids.)

Now that Sacajawea Audubon owns the property, the land is preserved from development. But the members have bigger dreams.

Nixon said it would cost about $6 million to do everything they’d like to do.

In April they got a start when 52 volunteers turned out to collect and haul away 30 cubic yards of trash from the property, plus 48 tires and several pieces of old cars. They hauled away debris from abandoned homeless encampments but left alone a couple of active camps, Nixon said. They’re working with HRDC and a local church to find places for the homeless, Reid said.

Harris walked the public trail Friday and pointed out alders and willows, and a Northern Harrier hawk, “the gray ghost,” flying over the wetlands with his mate. There’s a fox den nearby, she said, and people have seen a Sandhill crane. They hope to see the return of teal and grebes, American bittern and rails.

Everyone they’ve talked to so far has been supportive and offered to help, she said.

“It’s an ambitious project but boy, when it’s done, it’s going to be incredible,” Harris said. “And it’s all being done by volunteers.”