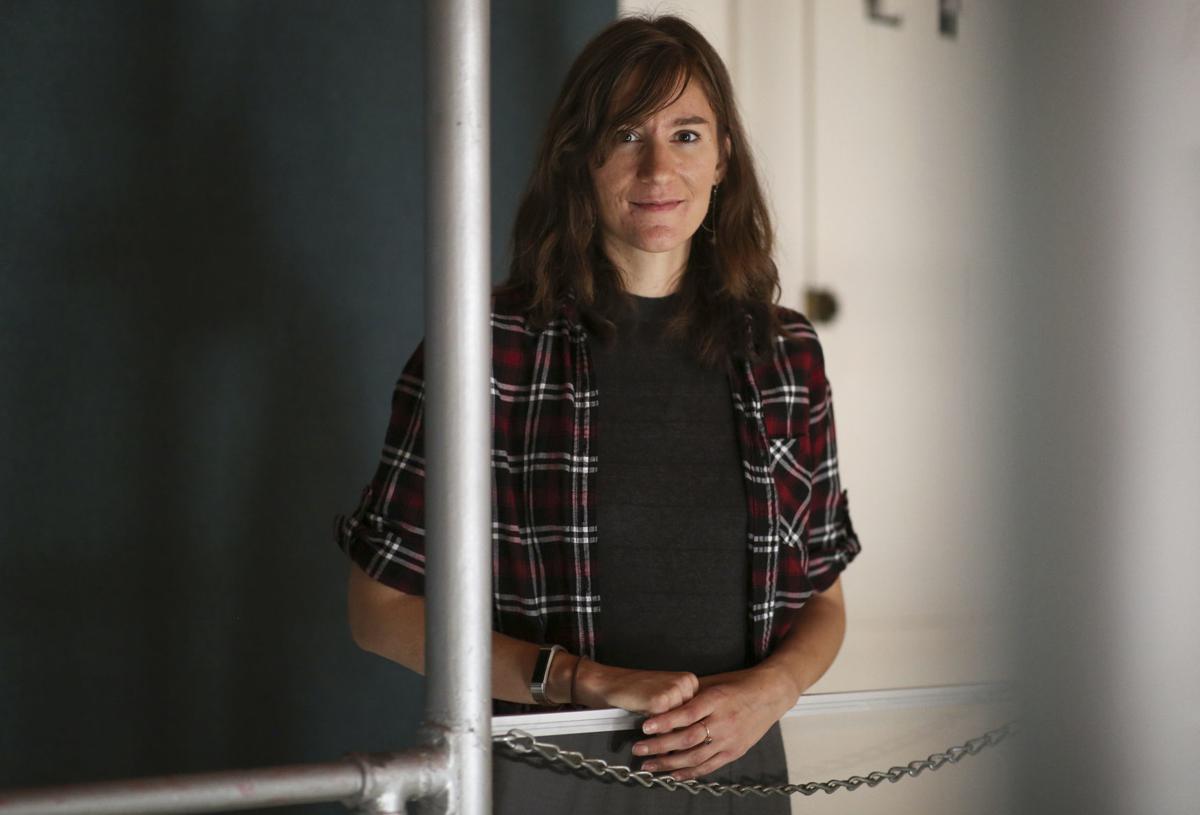 Kelly Hartman, curator at the Gallatin History Museum and author of, “Murder along the Yellowstone Trail: The Execution of Seth Danner,” poses for a portrait on June 25, 2020, in the museum. 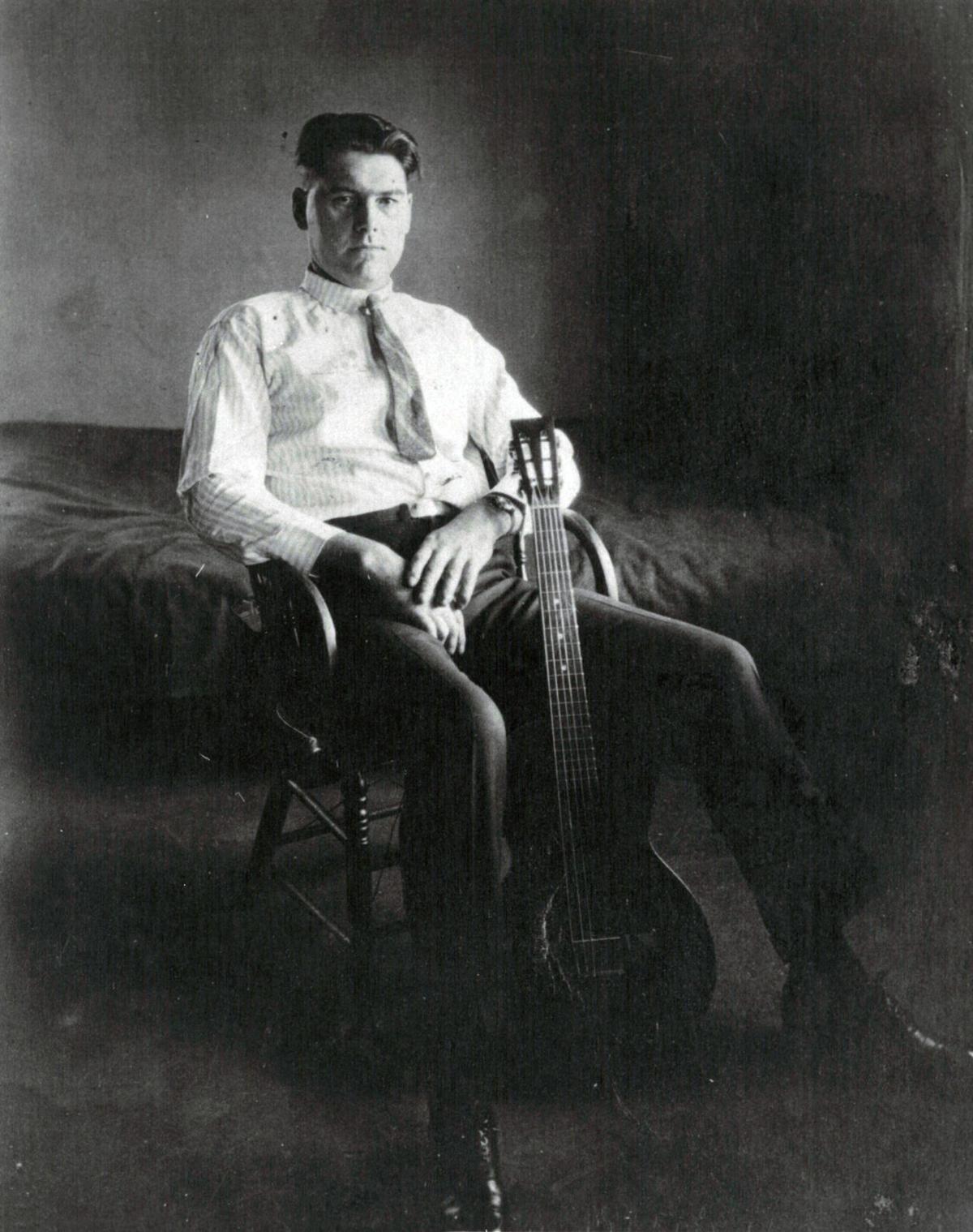 This photo of accused murderer Seth Danner, in Gallatin County jail with his guitar in 1923-24, was taken by photographer Albert Schlechten and supplied by granddaughter, Janet Danner Mann.

Kelly Hartman, curator at the Gallatin History Museum and author of, “Murder along the Yellowstone Trail: The Execution of Seth Danner,” poses for a portrait on June 25, 2020, in the museum.

This photo of accused murderer Seth Danner, in Gallatin County jail with his guitar in 1923-24, was taken by photographer Albert Schlechten and supplied by granddaughter, Janet Danner Mann.

The gruesome double murder that led to Seth Danner’s hanging in the old Gallatin County jail — and the mystery of whether he was truly guilty or wrongly executed — was giving Kelly Hartman nightmares.

She almost gave up trying to write a book on Danner, the only man ever executed inside the old jail.

As curator of the Gallatin History Museum, Hartman works inside the very same building where Danner was hanged on July 18, 1924, after one of the county’s most sensational murder trials. Every day she walked beneath a replica noose hanging from the museum’s ceiling, and she decided to do deeper research on its history.

“I love mysteries, but I’m pretty skittish about murder,” said Hartman, 31. “I started having nightmares — I was trying to get out of the building before he was executed. … I thought, I don’t know if I can finish the book.”

After a year and a half of research and writing, she did finish “Murder Along the Yellowstone Trail: The Execution of Seth Danner” (The History Press, $21.99). The museum is hosting a book-signing event July 10.

The evidence looked pretty damning in June 1923 when Danner’s wife, Iva, led the county sheriff to a secluded, waterlogged spot in Central Park, between Belgrade and Manhattan. The sheriff seemed doubtful until he poked in the ground with a stick and a human leg bone came up. Two bodies were unearthed.

They were Florence and John Sprouse, a couple who had driven west with the Danner family from South Dakota to Montana in 1920. The two families had camped in tents in a freezing cold November. Danner scrounged a living by trapping, selling hides, bootlegging and working as a mechanic.

Iva told the sheriff her husband had killed John with a shotgun and then killed Florence, hitting her with an ax and strangling her. The motive was robbery, though John had little but a used Ford and about $1.85 in his pockets. Iva said Danner threatened her to keep quiet. They and their children moved into town, sold the Ford and the Sprouses simply disappeared.

The next day Danner made a statement saying he hadn’t seen the Sprouses since South Dakota and denying any knowledge of the murders. He told a newspaper reporter his wife was telling the story because she’d found another man and had filed for divorce.

Months later Danner gave a different statement to the sheriff, saying that Florence had discovered her husband having an affair with Iva, killed him and then tried to shoot Iva. While Danner tried to wrestle away the gun, Iva hit Florence with an ax. It was self-defense, but Iva grew hysterical at the idea of telling authorities.

Yet Iva stuck to her own story that Danner was the killer, first through a divorce trial and then testifying against her ex-husband at his murder trial. Crowds were eager to get into the courtroom, and spectators would walk up during trial breaks and handle the evidence, which included two skulls.

The Bozeman Avant Courier wrote in one sub-headline: “Accusing Witness Describes Details of the Most Horrible Crime Ever Recorded in the Criminal Annals of Gallatin County While the Spectators Sit Spellbound at the Dramatic Points Brought Out by Attorney Wellington D. Rankin—Danner Unaffected.” Danner was deemed cowardly for not taking the stand.

In his closing argument to the jury, Montana Attorney General Wellington Rankin, then vying for the Republican Senate nomination, demanded the death penalty and played on anti-Indian bias — Danner was believed to be part Cherokee. Rankin told jurors Danner was “a yellow dog; a dirty yellow beast as yellow as his face is now” and “a rapist, thief, bootlegger and murderer.”

The jury found Danner guilty and voted for hanging. Within weeks, Iva had married Jim the Baker in Butte and left behind her children in the state orphanage.

A newspaper photo of Danner in jail showed him to be what one editor called movie-star handsome. Ladies visited him — some from the Salvation Army, some bringing cigarettes and chocolates.

The sheriff made sure the gallows inside the jail would work swiftly, and on July 18, 1924, Danner was hanged. He was buried in an unmarked grave.

Hartman said her nightmares stopped after she wrote Danner’s side, which had been largely ignored by investigators, reporters and the public.

Danner did lie about not seeing the Sprouses since they left South Dakota. But she believes he really did love Iva and may have been trying to protect her. In the end, despite all the details she uncovered, she can’t prove or disprove his guilt.

“I really feel in my heart he was innocent,” Hartman said. “I think it is a mystery. As much as I’d like to figure out what truly happened, I don’t think we ever will. He may have done it. He may have been an incredible liar and story teller.”

The book release will be held Saturday, July 10, with a short presentation at 5 p.m., followed by book signing and refreshments at 6 p.m., at the Gallatin History Museum 317 W. Main St., Bozeman. A second public reading will be held July 18, at 2 p.m., in Manhattan at Railroad Park, around the gazebo.