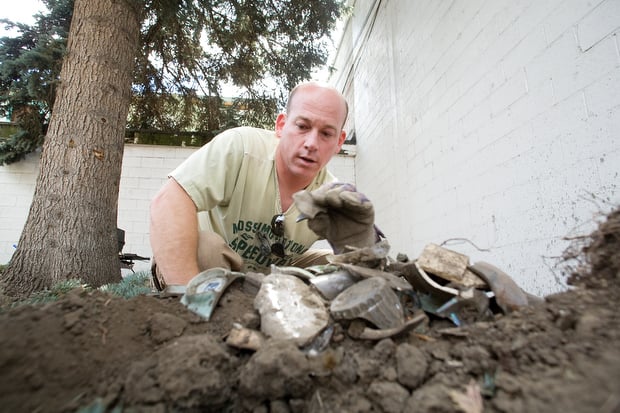 James Campiglia sorts through glass shards he had found while digging behind a downtown Bozeman business. 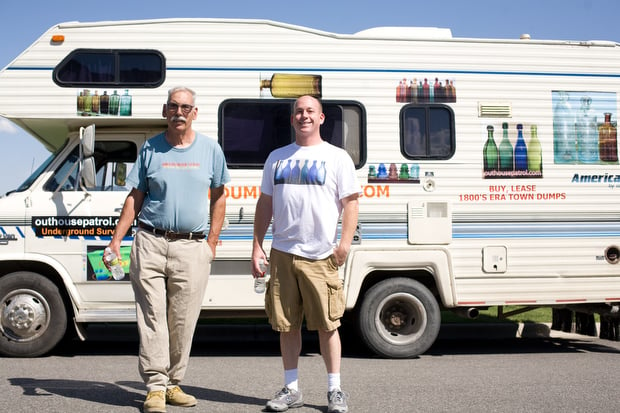 James Campiglia sorts through glass shards he had found while digging behind a downtown Bozeman business.

"The things people tossed down there tended not to break," Shoeman said. "It's a soft landing, so to speak.

"We've found guns in there. We've found coins, some jewelry. ... Once, we found a tombstone," he said.

The tombstone belonged to a Civil War soldier who had 14 children and died in a military hospital, the two men discovered.

Shoeman, 68, a retired mail carrier from Madrid, Iowa, and Campiglia, 41, an author and collector from Bozeman, call themselves "The Outhouse Patrol." They excavate, collect and sell the antiques they find beneath old privies, garbage dumps and ghost towns across the country.

They don't make much money doing it. But they say that's not what matters.

"The chase after the stuff is what's fun," Shoeman said.

To figure out where to dig, Shoeman and Campiglia look at old maps. Former hotels, saloons, trash dumps or other high-traffic places are prime targets. Spots marked "w/c," symbolizing where a water closet, or outhouse, used to be, can be especially lucrative, the two men said. That's because, before curbside garbage service, privy holes often served as the family garbage dump. "It was a lot of work to haul your stuff all the way out of town," Campigilia said. People threw their trash down the loo, instead. And, if they accidentally dropped an item — like a necklace or a broach — in the hole, sometimes they said "the hell with it" and left it there. Once Shoeman and Campiglia have picked a spot, they approach the property owner and try to strike a deal that will allow them to dig. They offer to share the items they discover and agree to put the land back the way they found it. That's usually enough to get the go-ahead, the two men said.

Once they get permission, Campiglia and Shoeman test the soil, use metal detectors and an electromagnetic imaging machine to determine the exact spot to unearth. The imaging machine, which is powerful enough to "look" through concrete, tells them whether and how deep the soil has been disturbed by humans.

Then they get dirty.

They bring in shovels and a backhoe, if they need it, and dig holes, unearthing treasures as they go.

In Bozeman, Campiglia and Shoeman have dug off of Baxter Lane where the town of Middleton once was. They've also dug beneath downtown properties. And, there are still many more spots around the Gallatin Valley that they hope to excavate.

But don't ask them where. They won't tell you. They don't want anyone else trying to dig there, too.

Bottles are some of the most collectible and valuable items Shoeman and Campiglia find. Campiglia, vice president of the Montana Bottle Collectors Association, has more than 1,000 of them. He has an Egyptian pot that dates back to around 100 A.D.

He has tiny glass opium bottles, no bigger than your finger.

He has poison bottles, once marked with special colors, textures or an inverted, backward "P" to identify their danger.

"Early on, they started putting poisonous stuff in cobalt blue bottles so people would recognize it," Shoeman said. "But kids would ingest it because it was in a pretty bottle."

Campiglia has bottles in every color from turquoise to yellow to purple.

Glass makers used to put manganese in green glass to remove the color and turn it clear. Now, when placed in the sun for a long time, those bottles turn purple.

But the most valuable bottle Campiglia owns is a brown Dr. J Hostetter's Stomach Bitters bottle.

During the Civil War, soldiers drank Hostetter's bitters to protect them "against the fatal maladies of the Southern swamps, and the poisonous tendency of the impure rivers and bayous," according to the National Park Service.

The formula in fact consisted of about 50 percent alcohol — making it about 94 proof — and was sweetened with sugar.

Campiglia's bottle isn't just old, though. It's one of only two intact Hostetter's stomach bitters bottles with a pontil scar on the bottom, a damage mark left by the glass blower when he made it around 1856 to 1860. It's worth about $4,600, Campiglia said.

MATCH MADE IN VEGAS

Shoeman lives in Iowa, but travels in his RV to digs with Campiglia. This summer, they're digging in Montana.

Shoeman dove for treasure in Iowa lakes, then sold his finds at the neighborhood bar before he and Campiglia teamed up about 10 years ago. The two men met at a bottle convention in Las Vegas, where Campiglia grew up, when Campiglia was just 10 years old.

Campigilia said his grandmother had given him an antique bottle and a magazine about collecting antiques. He was hooked.

Campiglia also writes guide books for casino chip collectors. But he said the only "real" job he's ever had was selling Yugo cars for a day and a half when he was 19.

He sells the bottles he finds at the Montana Bottle Collector's Association's annual convention in Butte every June.

"I've always bought and sold and wheeled and dealed since I was 8 years old," Campiglia said.

For more information about "The Outhouse Patrol," visit www.outhousepatrol.com.