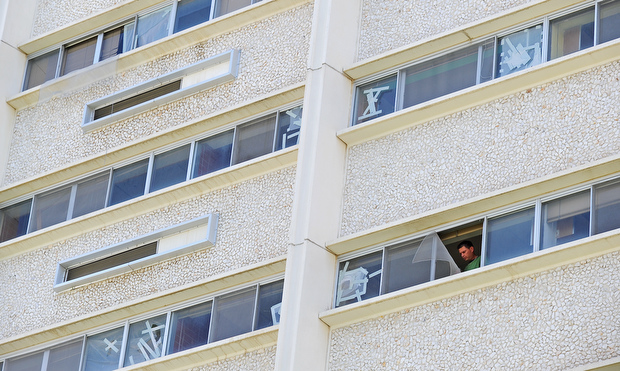 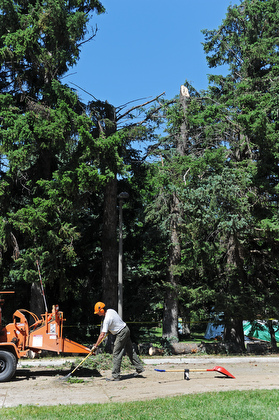 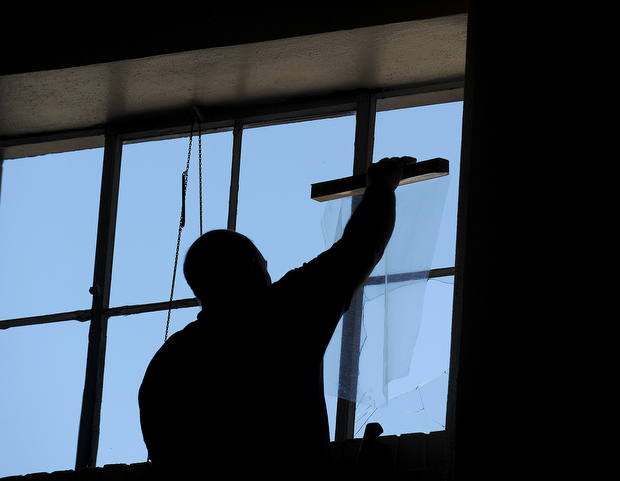 SEAN SPERRY/CHRONICLE A MSU employee places a temporary patch over a broken window. 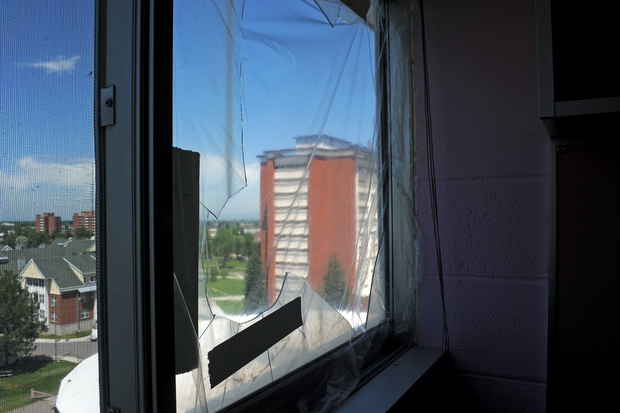 SEAN SPERRY/CHRONICLE A MSU employee places a temporary patch over a broken window.

Huge hailstones rocked Shakespeare in the Parks' stage, making such a loud noise that Mary Kehoe didn't hear it when two blue spruce trees snapped in half in the tempest.

The Shakespeare stage was set up in its traditional spot near the duck pond on the Montana State University campus. When a violent wind hit, Kehoe took refuge under the stage balcony.

It was only after the storm passed that she noticed the two big trees had broken, at the back of the lawn where the audience normally sits. The trees, which once stood about 50 feet tall, had broken off 25 feet from the ground and their top halves, 4 or 5 feet around, had fallen onto a utility road, not hitting any buildings or people.

"It could have been real bad," Kehoe said.

The MSU campus was directly in the path of Wednesday afternoon's hailstorm, which bombarded buildings, cars and people with hailstones up to 2.5 inches across.

The hail broke 800 to 1,000 windows on campus, Jeff Butler, facilities services director, estimated Thursday. Butler guessed repairing just the windows would cost $100,000 to $125,000. That doesn't include roof and tree damage, still being assessed.

"Thank goodness" the trees didn't fall on anyone, Butler said.

The closest call on campus was at Cobleigh Hall, where an associate professor of electrical engineering has hit in the face by flying glass when hail smashed windows. Blood staining his shirt, he was taken by colleagues to the hospital.

Rob Maher, electrical engineering department head, said the professor was OK but was getting his eyes checked by a doctor. The professor said he did not wish to comment.

When the hail hit, Tammy Brown, MSU housing director, was in her car by Roskie Hall dorm. Orientation had finished for 500 visiting students and 200 parents, who had just checked out of the North Hedges dormitory.

"I lost a windshield - it shattered in three places," Brown said.

"I was sitting there aghast," said Nancy Day, residence life administrative assistant, who was also sitting in her car. "Golf balls were coming at you, and the wind was rocking the vehicle."

After the storm, MSU employees visited every single one of the 1,900 dorm rooms and found 320 broken windows, Brown said. The worst damage was on the west-facing sides of the 11-story North and South Hedges dorms. Each had about 100 broken windows.

The first task was boarding up windows to secure buildings and patching broken panes with duct tape.

MSU custodians, carpenters and other employees did a "wonderful" job, Butler said. Some worked until midnight, even though they'd started shifts at 7:30 a.m.

Nearly every major building on campus had some damage, particularly those with windows 12 years old or older. Historic Montana Hall, where windows were recently replaced, was OK. But the greenhouse at the Plant Growth Center got "clobbered," Butler said.

The damage is covered by insurance, Butler said. The repairs will be so extensive, MSU will hire local contractors to do a lot of the work.

The damage pattern was different two years ago, the last time Bozeman had a severe hail storm, Butler said. Then the hail stones were smaller but more numerous, and stripped trees and plants of their leaves. This time the hail stones were bigger and caused more damage where they hit, but the hits were farther apart and didn't strip all the vegetation.

At Romney Gym, 57 windows were broken. Ed Pacenti climbed up a 25-foot ladder to repair one broken window with a strip of carpet protector, that's like an extra-wide band of Scotch tape.

"It was ferocious," Pacenti said of the storm.

Sarah Vogt, a graduate student in chemical engineering, said she had been working in Cobleigh Hall at a computer when the storm hit.

"The window behind me exploded," Vogt said. "It was pretty crazy."

Brent Olson, stockroom manager in electrical and computer engineering, said hail even broke the windshield of the Streamline bus he was riding. Being inside the bus as the hail pounded the metal roof, he said, "was like sitting in a drum."

Joe Shaw, professor of electrical engineering, whose passion is studying color and light in nature, ran up to the Cobleigh roof to photograph the approaching storm. Shaw said he photographed an "impressive" green light in the dark clouds, a phenomenon that scientists are still trying to figure out.

"I believe it tells us there's a very significant amount of ice in the storm cloud," Shaw said, calling that a very preliminary idea. His photographs of Bozeman's July 22, 2008, hail storm also show a green light in the sky, he said.

Near the Shakespeare lawn, MSU arborist Rod Walters was checking out the two blue spruce that broke in half. They were probably 85 to 95 years old and "perfectly healthy," Walters said. Why they broke, when neighboring trees didn't, is a mystery.

Steve Peebles, a Shakespeare in the Parks actor, said he had been going over scripts in a married student apartment on Julia Martin Drive when the hail hit.

"It was just ludicrous," Peebles said. "Hail was coming down with such force, if it hit the parking lot, it just exploded. When it hit the grass, it was bouncing up and hitting the second- and third-story windows. This stuff was coming down hard and fast."

In the interests of safety, Peebles said, director Joel Jahnke decided to cancel Wednesday night's show. The opening of "Julius Caesar" was delayed until Thursday, when the show would go on.

Photos from the hailstorm that hit Bozeman and surrounding areas on June 30, 2010.

Winners selected for annual 20 Under 40 Awards