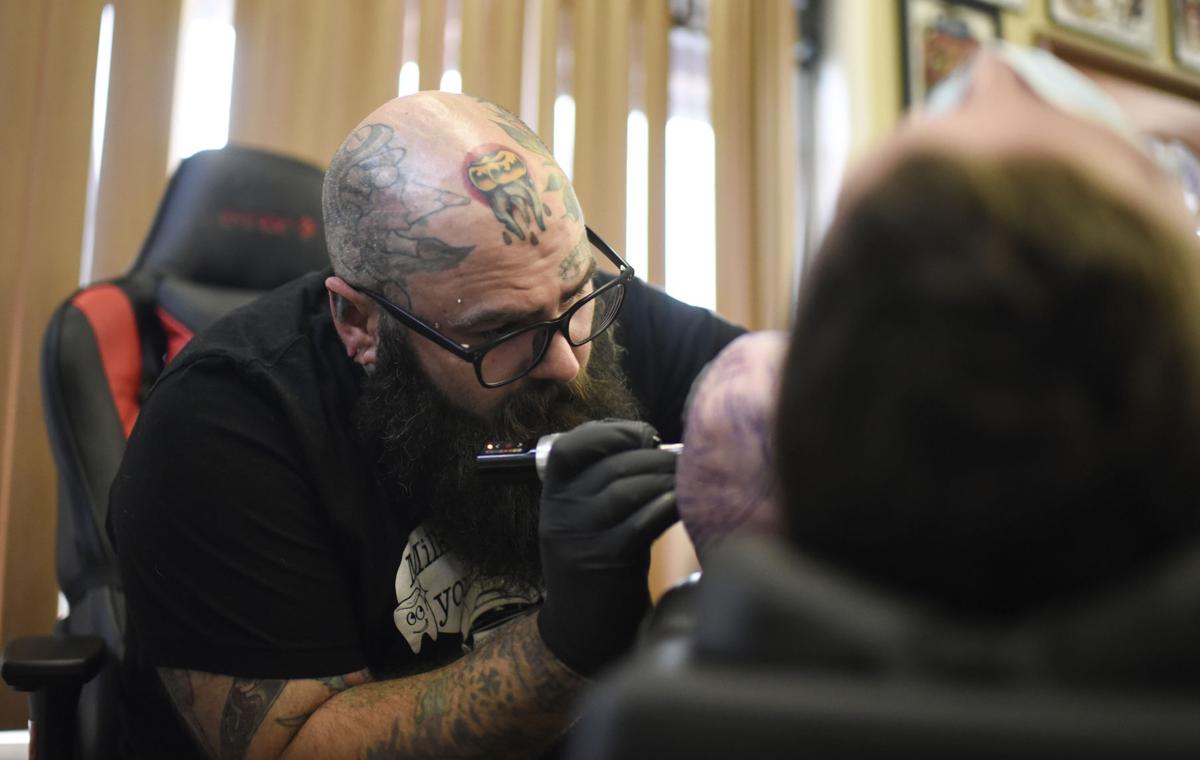 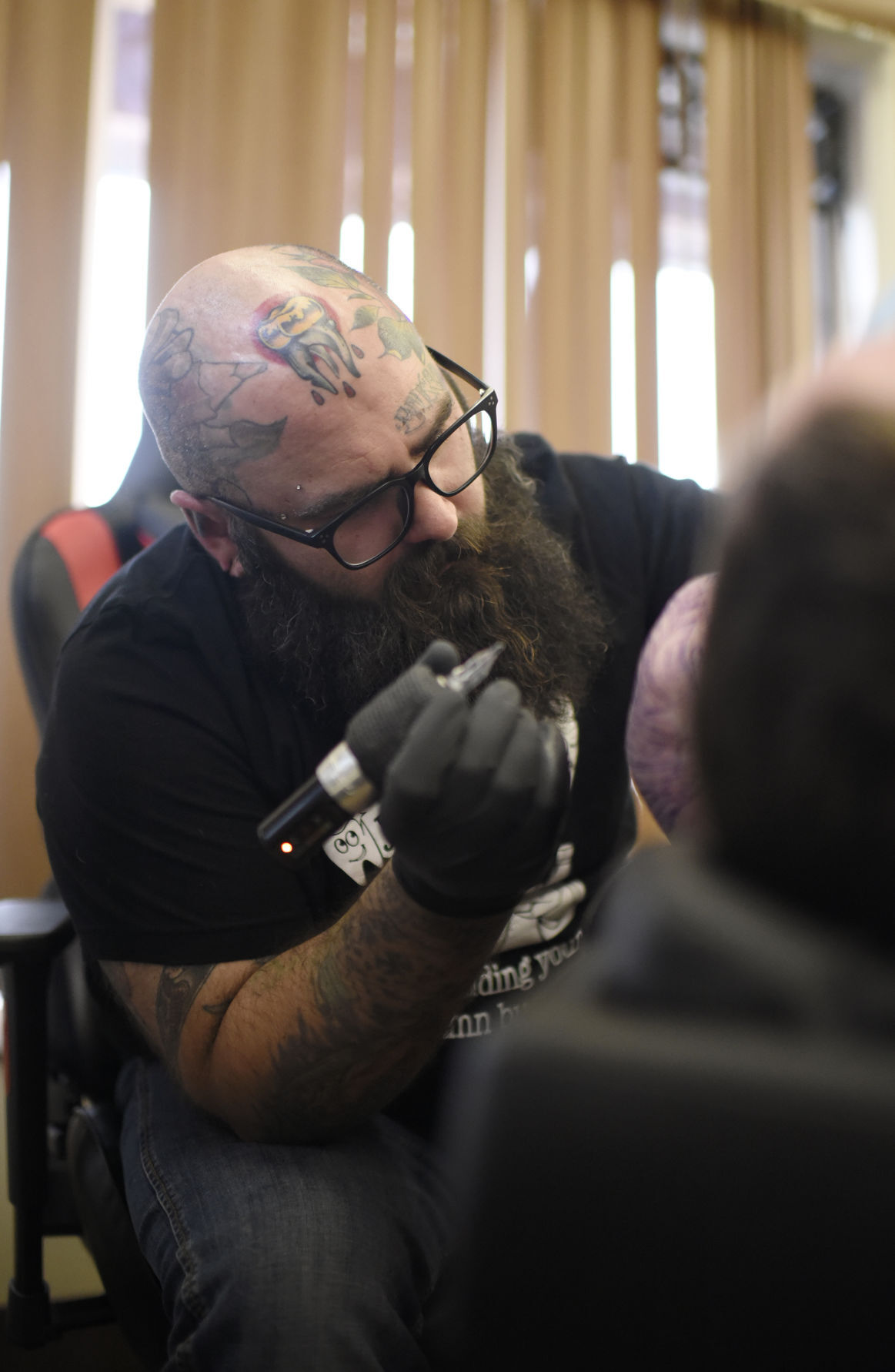 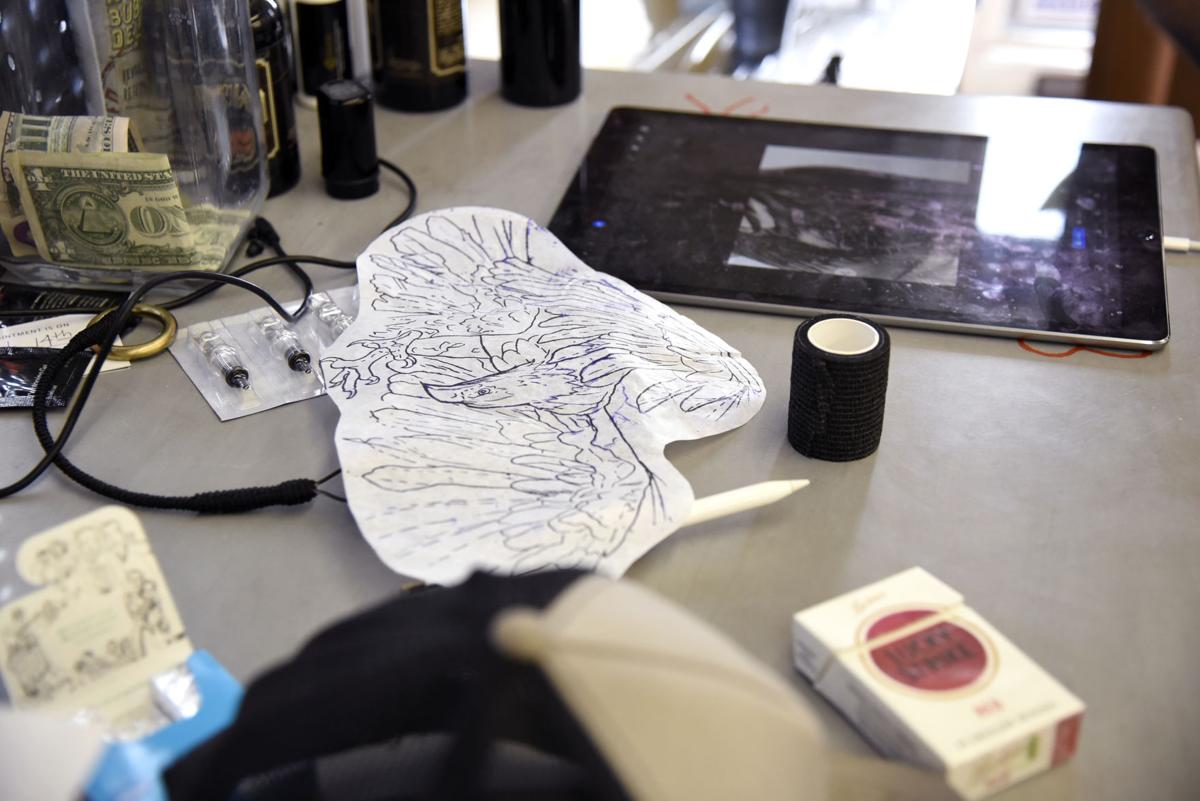 The drawing that Dale Hobbs was tattooing onto a client at East Main Ink on March 25, 2021. 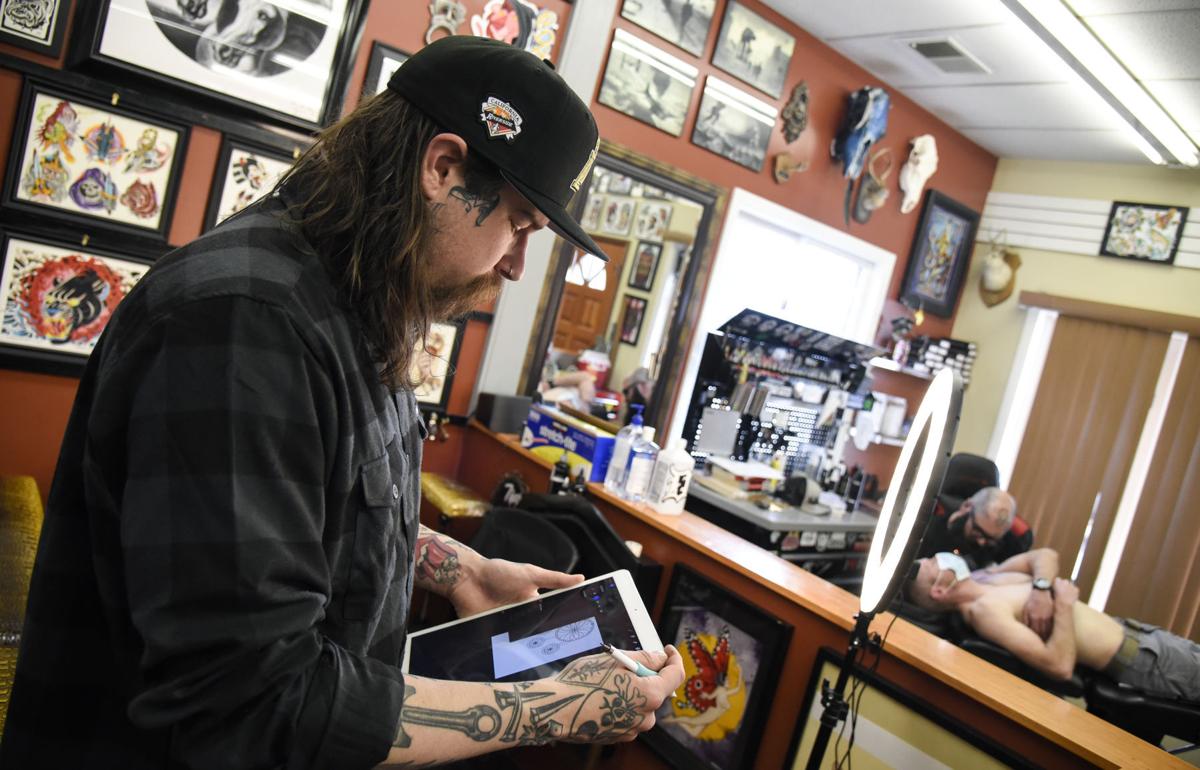 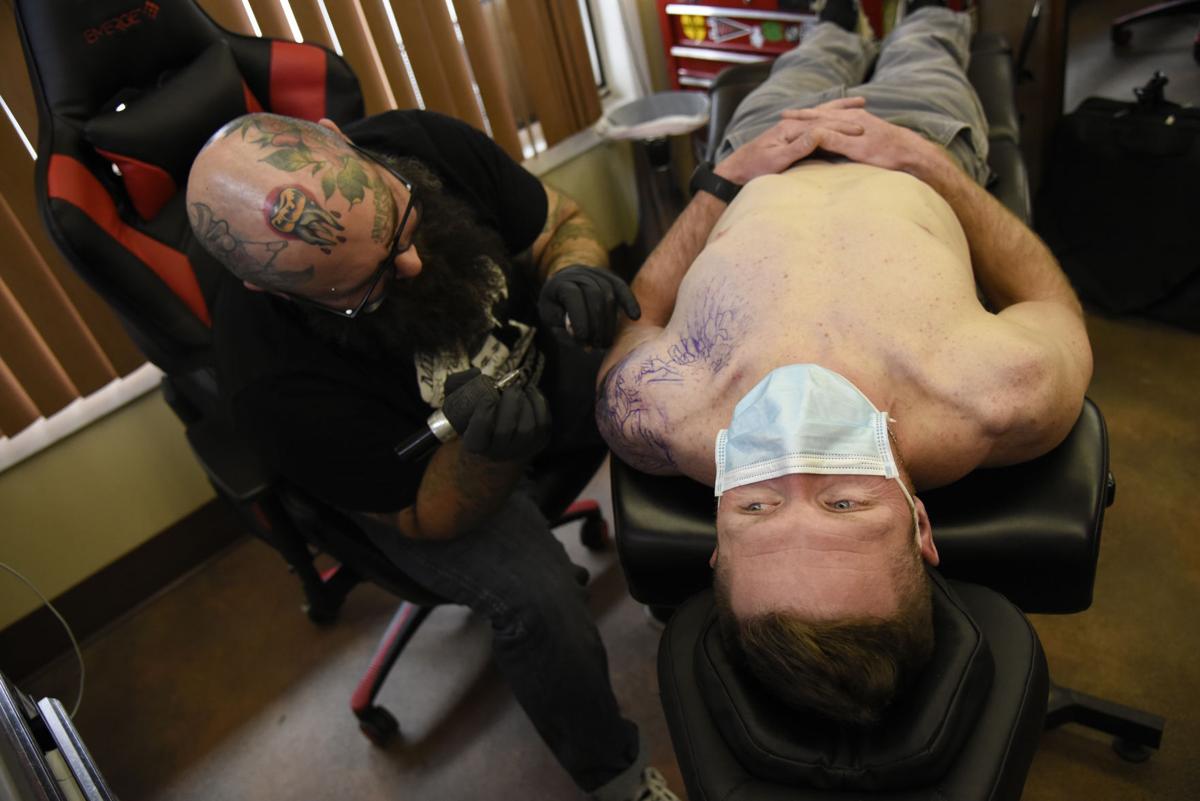 There’s the steady buzz of a needle and the loud thump of music as Dale Hobbs, a tattooist at East Main Ink, leans over the left shoulder of his client. For eight hours, Hobbs and his client will remain close as the shape of an eagle begins to take form on the client’s left shoulder.

Tattooing is an intimate art.

It’s an act that can feel even more personal in an era of 6 feet of distance, masks and an airborne virus that has reshaped many parts of the world.

“It’s an intimate experience,” Hobbs said. “Whether you like me or not, I’m going to be with you and my art will be a part of you.”

After two months closed last spring, many tattoo shops in the area are seeing a steady stream of clients looking for new ink while balancing additional safety precautions and supply chain challenges.

At East Main Ink, which will celebrate a decade in September, they’re continuing to sanitize each artist’s station as they would before and now routinely wipe down the high-touch areas customers come in contact with. While other shops have asked customers to wear masks during their sessions, it’s up to the customer at East Main Ink.

Business has remained steady for the shop throughout the pandemic and most of its artists are booked a week to a few months in advance.

Sean Fairbanks with Bozeman’s Tattoo Alley said business typically picks up this time of year for tattoo artists as people get extra cash from tax returns but the busy season kicked off earlier than normal. He said it’s possibly due to the two recent stimulus payments and more people feeling comfortable getting a tattoo.

“I would say we’re definitely picking up and getting busy,” Fairbanks said. “What we’re doing in the last three months compared to the last eight, we’re slammed.”

Although they’ve seen an increase in customers the last few months, for the shops that have implemented additional safety precautions, they’re still unable to see the volume of customers they normally would.

Bozeman’s Tattoo Alley, which has two fewer artists working than last year, has also been closed to walk-in traffic to control the flow of people moving through the small space.

“We’re figuring out how to go forth without the walk-in traffic being as much a part of the day-to-day,” Fairbanks said.

He said the biggest challenge for their shop is ensuring physical distance between clients. The health department considers the artist and client as one unit so distance is not required between the two but each artist and their client should be 6 feet from others working.

For Fairbanks, that meant until recently he worked two days a week to allow the artist closest to him to work more hours.

Like Tattoo Alley, Aether Tattoo Club has also reduced the number of clients it sees and staggered artists throughout the week.

“We’re taking as many people as we possibly can but in a manner that’s safe,” said Olivia Hogan with Aether Tattoo Club. “We’re not trying to have a shop full of people.”

Hogan said she and the other artists at Aether are booked out at least a couple months in advance. She said it’s mainly due to needing to catch up on clients they had booked before they were shut down for two months and taking fewer clients due to COVID-19 precautions.

“Instead of doing the amount of tattoos that we’re normally used to doing, we’re taking a break and trying to keep everyone safe,” she said.

Both Fairbanks and Hogan said their cleaning protocols have expanded and customers and artists are asked to wear masks during appointments.

With tattoo shops using many of the same products as medical professions, like gloves and sterile cleaning supplies, shops have continued to experience supply challenges or increased prices for products.

Gloves are one of the hardest products to keep stocked with the prices skyrocketing.

“The brand of gloves I have used went from $7 to $28 a box,” Hogan said. “The price markups are pretty insane right now.”

Hogan said the supply chains are backed up with some companies saying they don’t know when products will be back in stock. Shipping prices have gone up, too.

“There’s a lot of increase in our overhead right now,” she said. “And all of us are not taking the amount of volume of clients we would normally.”

Fairbanks said Clorox wipes and paper towels have been hard to come by in the quantities the shop needs. He said they previously bought towels and gloves in bulk from Costco but often have to order from five different places because many companies have a limit on how many products someone can purchase.

Although a few of the artists said they’ve seen COVID-19 related tattoos, including plague doctors and adding facemasks to different characters, the pandemic hasn’t impacted the variety of tattoos people are interested in.

“I would imagine when we get a little bit further past this there might be more in the realm of memorial things,” Fairbanks said.

One artist at East Main Ink said he recently tattooed a 78-year-old woman who got four different tattoos, including two to honor her husband and daughter. It was her first time being tattooed.

Hogan said there has always been a lot of trust that goes into tattooing, not only faith in someone’s art but in their ability to communicate and make someone feel comfortable during the process.

It’s a trust that has only been heightened for some during the pandemic.

“I think people call it ink therapy because the act of getting a tattoo is really cathartic because you are going through something that is painful and there is a certain amount of physicality and release,” Hogan said.