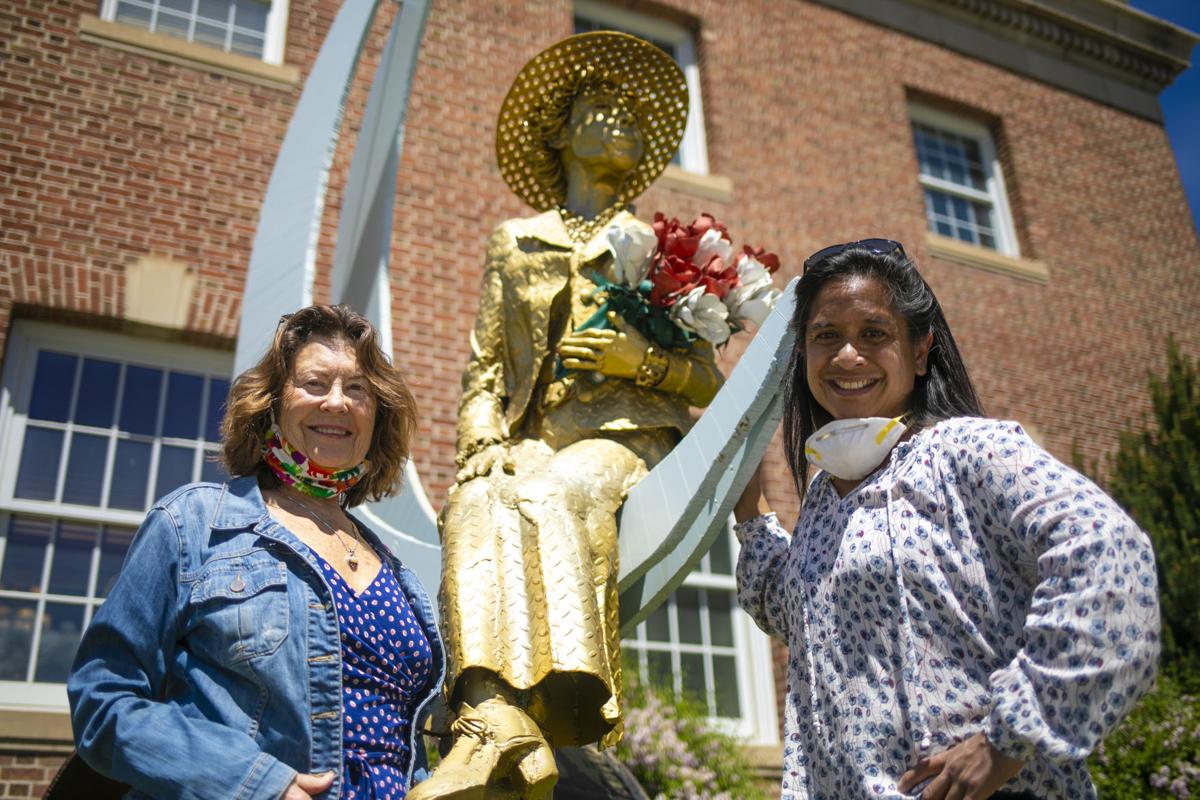 Jan Strout and Lei-Anna Bertelsen stand with the Babcock Street statue of Jeannette Rankin, the first woman elected to Congress, on the 140th anniversary of Rankin’s birth Thursday, June 11, 2020, in Bozeman. Strout and Bertelsen, along with Michael Wallner and Carson Taylor, are leading a task force that aims to address gender and racial inequality in the Gallatin Valley. 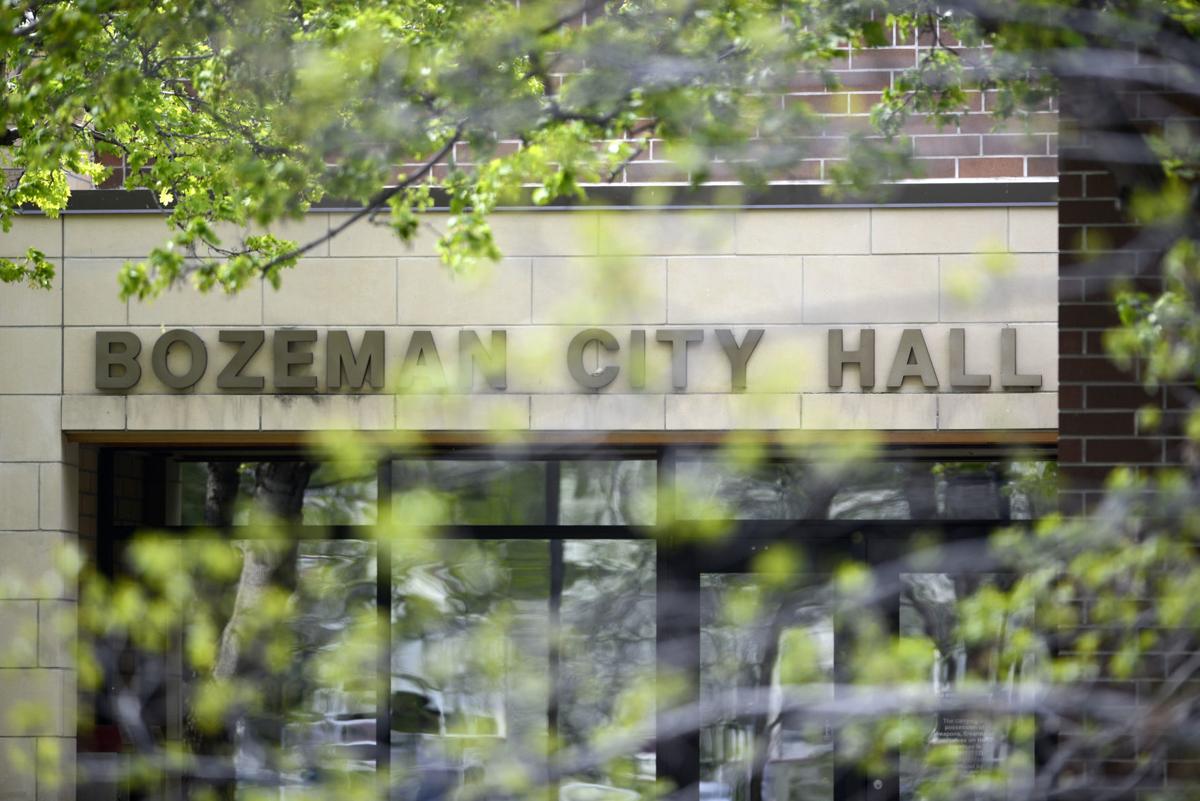 A look at Bozeman City Hall on Rouse Avenue.

Jan Strout and Lei-Anna Bertelsen stand with the Babcock Street statue of Jeannette Rankin, the first woman elected to Congress, on the 140th anniversary of Rankin’s birth Thursday, June 11, 2020, in Bozeman. Strout and Bertelsen, along with Michael Wallner and Carson Taylor, are leading a task force that aims to address gender and racial inequality in the Gallatin Valley.

A look at Bozeman City Hall on Rouse Avenue.

Jan Strout has been working to address challenges and disparities faced by women and girls for more than 40 years, having helped create Montana State University’s Women’s Center and Bozeman’s shelter for survivors of domestic violence, among other efforts.

She has seen progress over the years, but not nearly enough.

In a push for gender equity, Strout and three other local leaders have formed a new task force to tackle gender and racial discrimination in the Gallatin Valley in all its forms — including pay inequity and other workplace discrimination, violence against women, economic insecurity and disparities in health care.

If history provides any indication, it’ll continue to be a slow, uphill battle. But it’ll be worth it, Strout said.

“We know that when women and girls are empowered and treated fairly, Bozeman and all Montana communities prosper,” Strout said.

The group is called the Bozeman Task Force to Advance the Status and Safety of All Women and Girls.

The task force, endorsed by the city commission, is a product of the group Bozeman for the Convention on the Elimination of All Forms of Discrimination Against Women, which Strout also co-leads. It will spend about a year researching and identifying specific challenges they want to prioritize and then drafting policies to address them.

Recent events have reinforced the need for a task force like this one, Strout said.

“With the pandemic and the racial justice work being done, it laid bare what many, many people knew and experienced about vast inequality,” Strout said.

The National Bureau of Economic Research reports that the current recession is disproportionately affecting women because it reduced more jobs in female-majority work sectors and closed day cares and schools. Early data from the Centers for Disease Control and Prevention shows that COVID-19 is hospitalizing and killing black men and women at a disproportionately high rate. Massive demonstrations have erupted throughout the U.S. and internationally in the last few weeks to protest racism, inequality and police violence.

Bertelsen, a longtime social justice activist and an organizer of the Bozeman Women’s March, said having concrete statistics that show where disparities are and how they’re created is the first step to remedying them. But there are blind spots, she said.

“I became quite frustrated, honestly, because I couldn’t answer some of those basic questions,” Bertelsen said.

So Bertelsen helped spearhead a research project that published a report in September 2019 to answer questions about how safe the area is for women and girls, how economically secure women are, and how sexism, racism and violence-related trauma take a toll on women’s physical and mental health.

The authors combed through information from more than 40 entities, like Bridgercare, the Human Resource Development Council and the Bozeman Police Department. The research goes far beyond pay equity.

According to the report, Haven, Bozeman’s domestic violence shelter, saw a 14% increase in demand for services between 2017 and 2018. The nonprofit found that 7% of those who needed services were Native American and 6.5% were Latino. The U.S. Census Bureau estimates that of Bozeman’s population, only 0.6% of residents are Native American and 3.3% are Latino, meaning women of color are overrepresented in those seeking Haven’s services.

About 13% of area residents report being victims of intimate partner violence.

Women make up 65% of those who receive benefits through the Low-Income Energy Assistance Program. The local food bank found that between 2013 and 2017, there was a 140% increase in the number of women they served.

Of the people who sign up for job training as certified nursing assistants in town, 93% are women, and starting pay is $14.25 an hour. But 100% of those signing up for commercial drivers licenses are men, and their pay starts at $22.50, according to the local Career Transitions.

The report also highlights the lack of child care in Bozeman, a service that working and single mothers rely on. There are only enough providers in Gallatin Valley to serve 33% of the need.

What’s missing is the study of the intersections between gender, race, age, education, income, sexual orientation and ability, according to the report.

The new task force hopes to fill this gap and build on that research.

“We just need to ask — what are we not seeing, who’s not at our table?” Bertelsen said.

The city has attempted to deal with inequality.

It’s been five years since the commission passed its first equal pay ordinance — which took two years of campaigning, Strout said. It’s been 10 years since the commission endorsed a controversial, non-discrimination resolution that aimed to protect LGBTQ+ residents. Last month, commissioners approved an ordinance asking third-party vendors to commit to following equal pay laws in order to do business with the city.

And yet, disparities persist in city government.

Since the city adheres to pay scales in each department and the majority of its employees are unionized, these numbers are not indicative of discrepancies in pay between two people doing the same job, but show the difference between the jobs men and women traditionally pursue and how they’re valued.

Male-dominated departments like fire, police and public works typically pay more than city jobs that are predominantly filled by women, like clerk positions.

On this front, the city is trying to recruit more women into male-dominated fields, according to finance director Kristin Donald. For example, the city hired its first two female firefighters this year and created two part-time police jobs that are more flexible and have been filled by women.

The city doesn’t keep data on what disparities look like for employees who are black, indigenous or other people of color.

Just last week, in light of local protests, the commission requested staff formally review the city’s treatment of minority residents. Findings from that review are expected by the end of July.

Wallner, a new city commissioner, said his work in public policy and economic analysis will be an asset as the task force compiles data inequality and discrimination.

He said he feels personally connected to the issue because he has four older sisters and he’d never want them to be treated differently because of their gender. He added gender equality as one of his campaign platforms last summer after meeting with Strout.

“It’s been personal for me my entire life, that’s definitely shaped my perspective and who I am as an individual, so I’m glad to be here and part of the team,” Wallner said.

Taylor also brings knowledge of the city commission, having served on the board from 2010 to 2018 and as mayor for two years. He’s also no stranger to social justice work and the pushback that can come with it.

In 2010, Taylor was a newly elected Bozeman commissioner when the board passed an ordinance aimed at protecting LGBTQ+ residents from discrimination. The first criticism came from people who said Bozeman didn’t have a problem with discrimination. Public comment on the ordinance itself proved it does, Taylor said.

Since then, Taylor said, Bozeman has continued to grow at a rapid pace and with that comes a more diverse population.

“Bozeman is changing and that’s a good thing, but we have to be prepared for those changes to be a more welcoming city,” Taylor said.

Taylor said he hopes the task force tackles issues like inequities in health care, safety and the workplace, but that he plans to let women and people of color lead the discussion.

Even though the task force has a full year of work ahead of it, Bertelsen and Strout already have some recommendations in mind that are outlined in the report published in September.

Those include asking the police department to keep expanded crime statistics that cover age, race and gender of victims in a consistent way that’s easy to sort. They want more city-funded studies on gender, race, age and income. They propose the city increase diverse representation on decision-making boards toward parity.

Strout said these recommendations are aimed at city government because that would create institutional change. And once change is made at institutions, it becomes “an example of what we call normal in our society,” Bertelsen said.