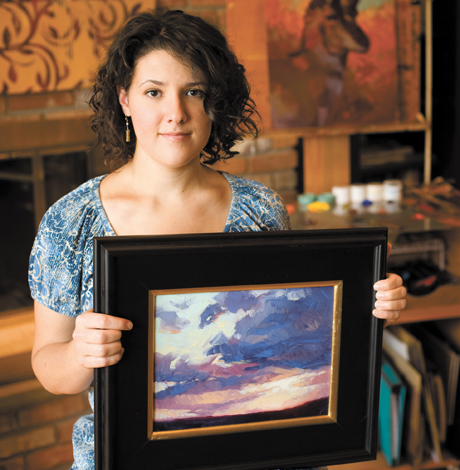 Bozeman artist Whitney C. Hall is featured in the Southwest Art Magazine's "21 Under 31" emerging artists in the U.S. 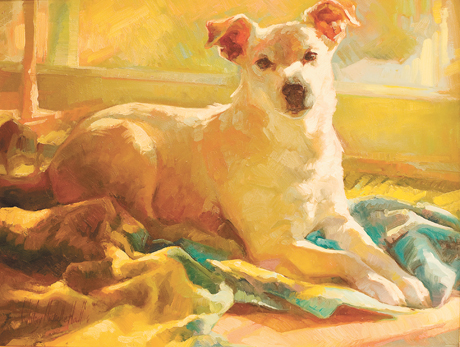 "Good Clean Sun," a portrait of the Hall family dog Jubilee lying in the sun, has been accepted into the Oil Painters of America Western Region Art Show.

Bozeman artist Whitney C. Hall is featured in the Southwest Art Magazine's "21 Under 31" emerging artists in the U.S.

"Good Clean Sun," a portrait of the Hall family dog Jubilee lying in the sun, has been accepted into the Oil Painters of America Western Region Art Show.

At 24, Bozeman artist Whitney C. Hall is an accomplished wildlife artist and teacher.

This month, Southwest Art Magazine recognized her as one of “21 Under 31” young emerging artists from around the United States.

The magazine calls for entries every year to recognize the best and brightest upcoming artists. “I had entered in 2008, but my work really wasn’t fleshed out,” Hall said. “I was glad they didn’t pick me then. I entered this year, and definitely had more of an idea of what I wanted to paint. I was more developed.”

The portrait of an Apaloosa horse is published in September’s Southwest Art Magazine alongside an interview with Hall. Boldly spotted and tacked out in a Native American bridle with a bright orange wash of color in the background, Hall found the subject at the Butte Folk Festival and the painting sold at this year’s Western Master’s Art Show in Great Falls.

Being chosen was a big surprise, Hall said. “Mom was there. She answered the phone, said ‘Southwest wants to talk to you.’ She didn’t know what it was about.”

But as Hall’s biggest supporter, it must not have been that big of a surprise to Terry Hall.

A fine artist herself, with years of professional commercial art behind her, Terry and Whitney not only live together in the family home north of Bozeman, but work and run Cobalt Moose Art Studios together.

“My husband and I chose to, rather than put Whitney through a university where she would not learn the classic type of fine art, we chose to support her this way,” Terry said. “That’s why she’s still at home until her career gets firmly established and she’s out on her own. So it’s been a family decision.”

Whitney started drawing as a child.

Her mother worked first as a land planner and then as a muralist, Whitney said, “so, I was always either under a drafting desk or else with her at houses watching her do murals.”

In high school, the artist tended toward writing as a career, but when she attended Palomar Community College near San Diego, she took some art classes. “I took illustration classes and a couple of fine art classes out of curiosity, and right away, I really preferred fine art.”

When Whitney started bringing her schoolwork home, Terry said, “That’s what I need to be doing.”

They started taking classes together. Together, both developed styles strongly influenced by California Impressionism.

“The bright color and the strokes are right next to one another, with more thick paint,” said Whitney. “It’s more focused on the color and the interaction of all the light. The animal is almost like, not an afterthought, but a medium where I can show that. I think that’s why I like my animals because of the light reflecting off them. What I’m really painting is the light.”

While many of Whitney’s subjects are animals or western scenes, she does not paint in a western style, she said, but paints western subjects, things that attract her eye and that are in abundance in Montana.

“If I’m going to be staring at something for a couple of days to paint it, I want it to be something I really like.”

Whitney said she paints all her animals from photographs, but not as a copy, just as a starting point. She goes out in the morning or later in the afternoon and takes pictures of horses or the deer that stop by the family yard just off the Frontage Road between Bozeman and Belgrade. If she wants something more exotic, a trip to Yellowstone Park is not that far away. “It’s almost like living in a zoo.”

The family used to live near San Diego Safari Park, so zoos are something she’s familiar with, an early exposure that led her love of animals.

“I basically grew up there,” she said.

She was able to identify all the animals in the park and could even correct the tour guides, Terry said.

“I was one of THOSE children,” Whitney said.

“I think the idea is passed on a lot that representational art is passé but there is actually a really huge art community if you look for it. You won’t just run into it.

“A lot of kids get out of high school with a really good education in contemporary modern art. But they don’t get a lot of the classics unless they really search it out. So I’d like to work with young adults to make sure they get both sides, get a well-rounded idea.

“We just work the room together,” Terry said.

Despite her young age, Terry said, students of all ages respond to her expertise.

“Whitney does demos in front of adults and there’s been no question. There was no question that she had the ability to teach.

So while it's been said that mother and daughter relationships can be some of the most contentious, it isn’t apparent between this team.

“I think, because we respect each other so much, that makes it work,” Terry said of living and working together.

“Half the time we’re the only people in the house to talk to,” Whitney said. “My brother's at school, my dad’s at work. We have to like each other, we share the same kitchen.”

And on a more serious note, Whitney said, “I think taking so many classes and workshops together, it’s kind of a shared experience.”

LuAnn Rod is at getout@dailychronicle.com

Cobalt Moose Art Studios is located at 27383 Frontage Road; 585-5443. The website is Art@CobaltMoose.com. Whitney’s art can be seen at whitneymhall.com. Her art is also available at Head West in Bozeman and West Lives On Art Gallery in Jackson Hole, Wyo.