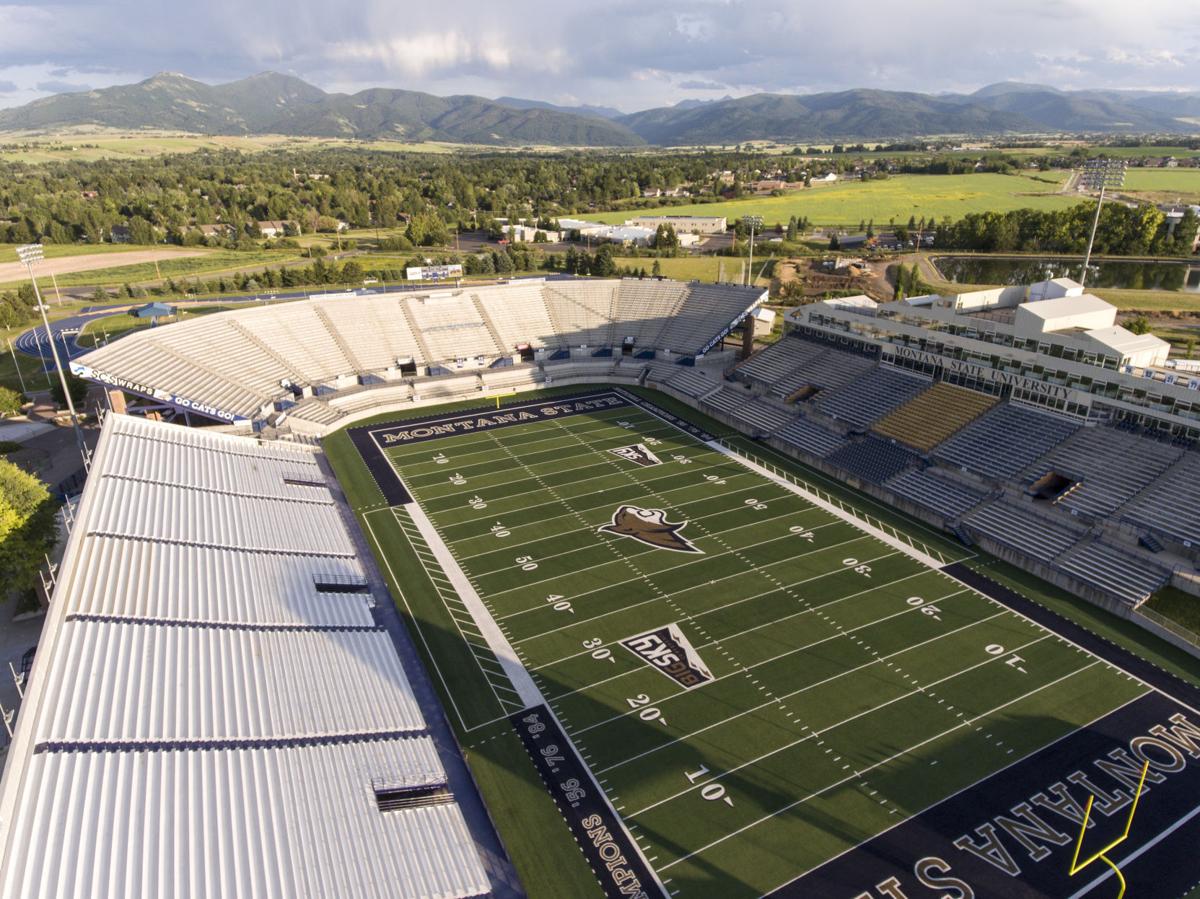 The sun sets on Bobcat Stadium on July 24. 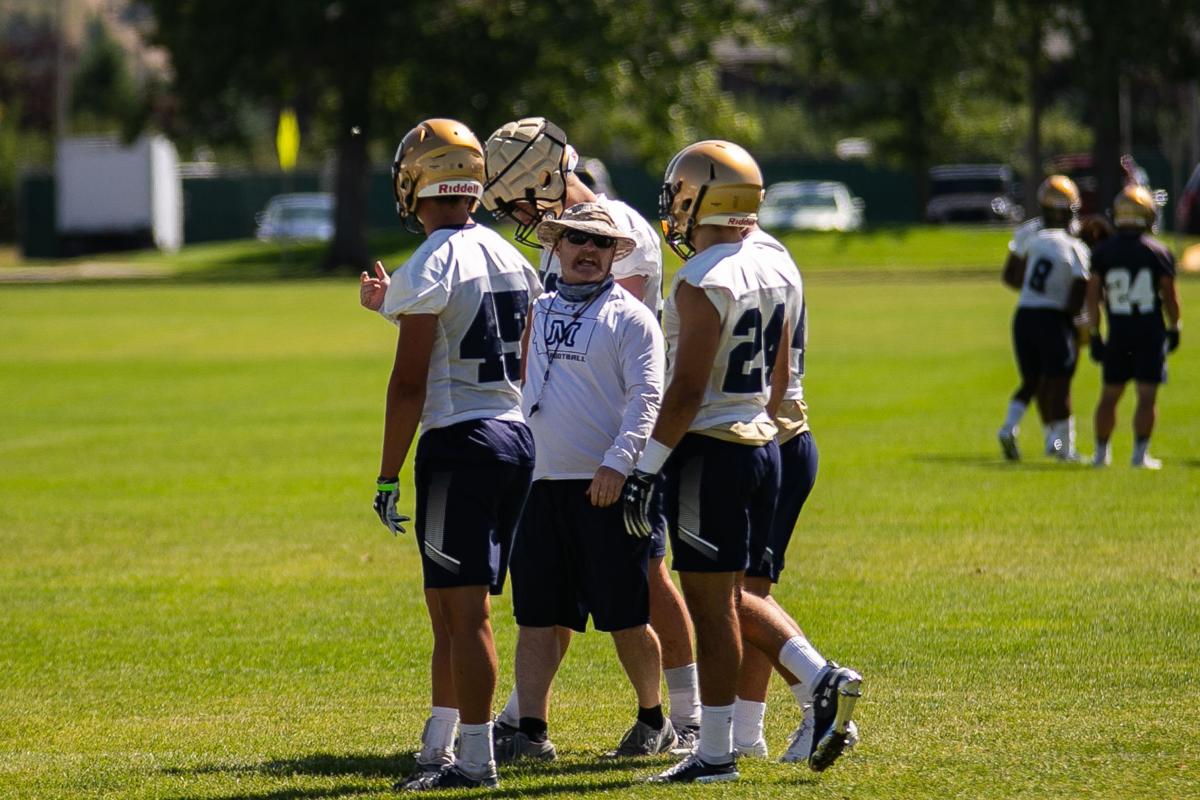 Montana State practices Friday despite the Big Sky Conference postponing the football season to the spring.

The sun sets on Bobcat Stadium on July 24.

Montana State practices Friday despite the Big Sky Conference postponing the football season to the spring.

Head coach Jeff Choate called out to his assistant coaches, assigning them responsibilities. Players split up into position groups and ran through drills to improve their skills. In the distance to the south, machinery moved and built up what will become the Bobcat Athletic Complex, a sign of hope for MSU’s athletic department.

But on Monday, not much else was normal for MSU football. The Big Sky announced it would move its fall conference football season to the spring due to the coronavirus pandemic. For now, the Big Sky is targeting an eight-game conference schedule, though the future of the FCS playoffs, non-conference games and other sports this fall are still in limbo.

“It’ll be different, but I think everything we’re experiencing this year, there will be nothing normal about his entire year,” Montana State athletic director Leon Costello said. “And we’re just going to deal with it. Having the ability to play football is first and foremost, and if we can do it safely, we’re going to be ready to go.”

Earlier in the week, the NCAA laid out expansive health protocols to help protect the well-being of college athletes involved. Costello and Big Sky commissioner Tom Wistrcill identified the conference’s ability to meet these guidelines as key barriers standing in the way of holding a fall season or championship.

Costello said “we were running out of time” to make a choice about football, with games scheduled in September. He hopes this eased the minds of athletes.

“Our student-athletes want as normal of a situation we can possibly give them because of the atmosphere our fans provide,” Costello said. “I need them to know, for our student-athletes, they want to get back to that as soon as possible. I truly think moving to the spring might get us to a more normal situation with more fans in the stands.”

The NCAA health protocols require coronavirus testing and results within 72 hours of competition in high-contact risk sports like football. Wistrcill said acquiring the resources for that level of testing for everyone involved in FCS-level athletic programs, many already financially burdened by altered enrollment numbers and revenues, was “virtually impossible.”

“That presents a big challenge to our schools,” Wistrcill said. “First of all, just getting the actual tests in place, getting them back in time, making sure they were correctly getting their results, all of that for all of their institutions and communities would’ve been really difficult.”

However, Gov. Steve Bullock announced Thursday up to $20 million will be sent to MSU and the rest of the Montana University System to help limit the spread of COVID-19. This would allow for expansion of rapid coronavirus testing for symptomatic people with the hopes of producing results in 24 hours or less.

Most notably for athletics, the funding also addresses asymptomatic groups of people considered to be at a high risk of virus transmission.

Costello said Friday he was “really confident” in MSU’s testing capabilities and health protocols. The question for him was how sure he was in the capabilities of other schools.

“I just think everyone was in a different position, and if all of us couldn’t meet all of those requirements, than what are you left with?” Costello said. “... Another thing I heard over and over is (the athletes) want it to be in a healthy environment. They want to take care of themselves, their teammates, their coaches. But then they also want to play for those championships. I think a lot of those requirements became large obstacles and challenges for FCS institutions.”

Wistrcill stressed the difficulty of the decision for those involved. As many around the country waited for official news to be released on Thursday, conference officials deliberated what would need to happen for the Big Sky to play football.

The conference is made up of several committees including faculty representatives, administrators, coaches and athletes. Wistrcill said the conference took “a lot of input from a lot of people” including health officials like team trainers and doctors around the league.

Wistrcill said, however, the Big Sky’s presidents council has “ultimate authority.” With many conversations leading up to Thursday, the Big Sky athletic directors made recommendations to the presidents. After considering necessary factors and working through final details, the presidents arrived at their conclusion.

“I feel really good about keeping the health and safety of our student-athletes and coaches at the forefront of our decision,” Wistrcill said. “Following the (NCAA) protocols is just not going to work for our situation.”

Costello and Wistrcill also kept in touch with other FCS conferences. While Wistrcill wanted the Big Sky’s determinations to be based on its own circumstances, he remained in contact with other commissioners. He hopes the FCS, together, will move to the spring and boost the chances of a postseason.

Wistrcill also wanted input directly from the athletes. After these countless discussions, he was confident about the result.

“We owed it to our coaches and student-athletes to give them answers,” Wistrcill said. “We had so many question marks out there that I think we had to make a decision.”

They felt playing in the spring gave them the best chance to do that.

“These decisions were not made lightly,” Costello said, “but I can tell you this: They were made with the health and safety of our student-athletes, our coaches, our staff and our fans in mind.”

Choate stressed how the Big Sky’s announcement removes a cloud of doubt looming over a possible fall season, which could’ve been cut short or deemed unsafe. Kidd recently felt he was like a freshman again, trying to navigate uncertainty and determine how he should handle himself.

Choate believes Friday provided normalcy and closure, which was the “most powerful thing.”

“That allows us to kind of get started and start looking forward,” he said. “... We’ll make sure we prepare them for competition moving forward. Whatever it looks like, we’ll be ready.”