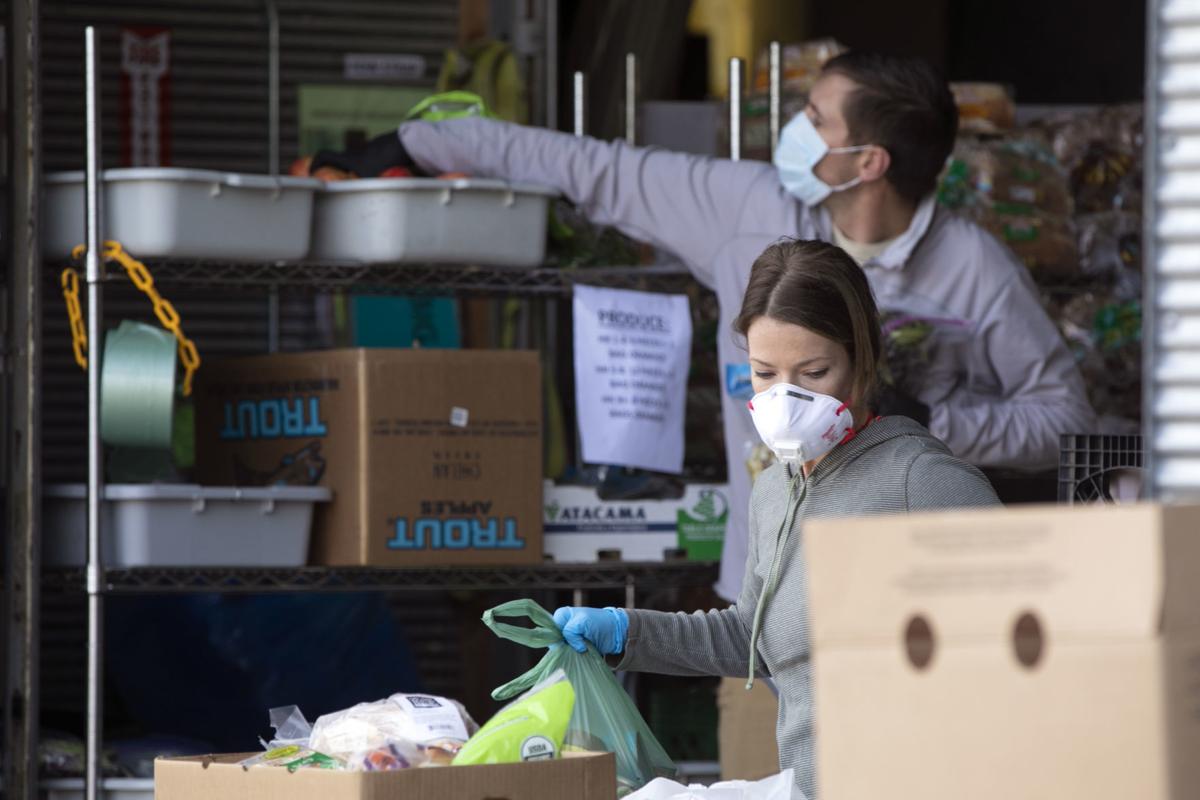 Workers at the Gallatin Valley Food Bank fill orders for people as cars pass through the drive-through lane Monday in Bozeman. 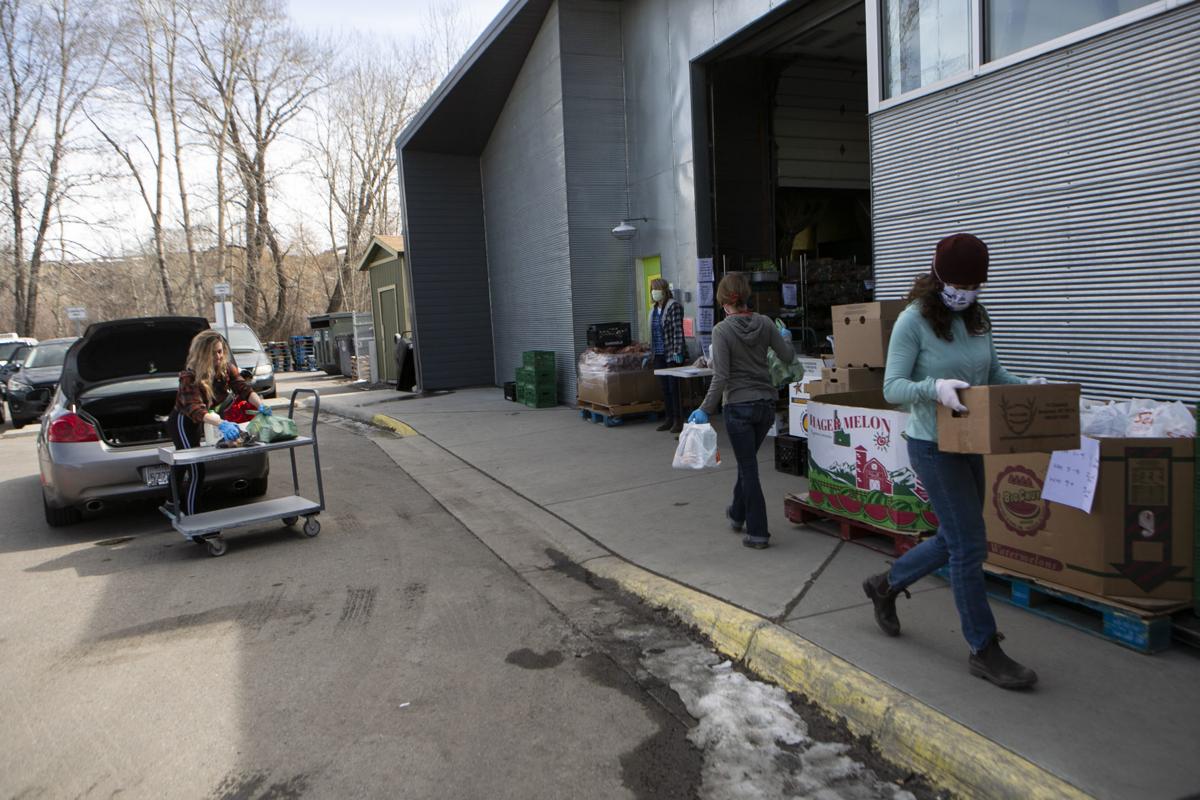 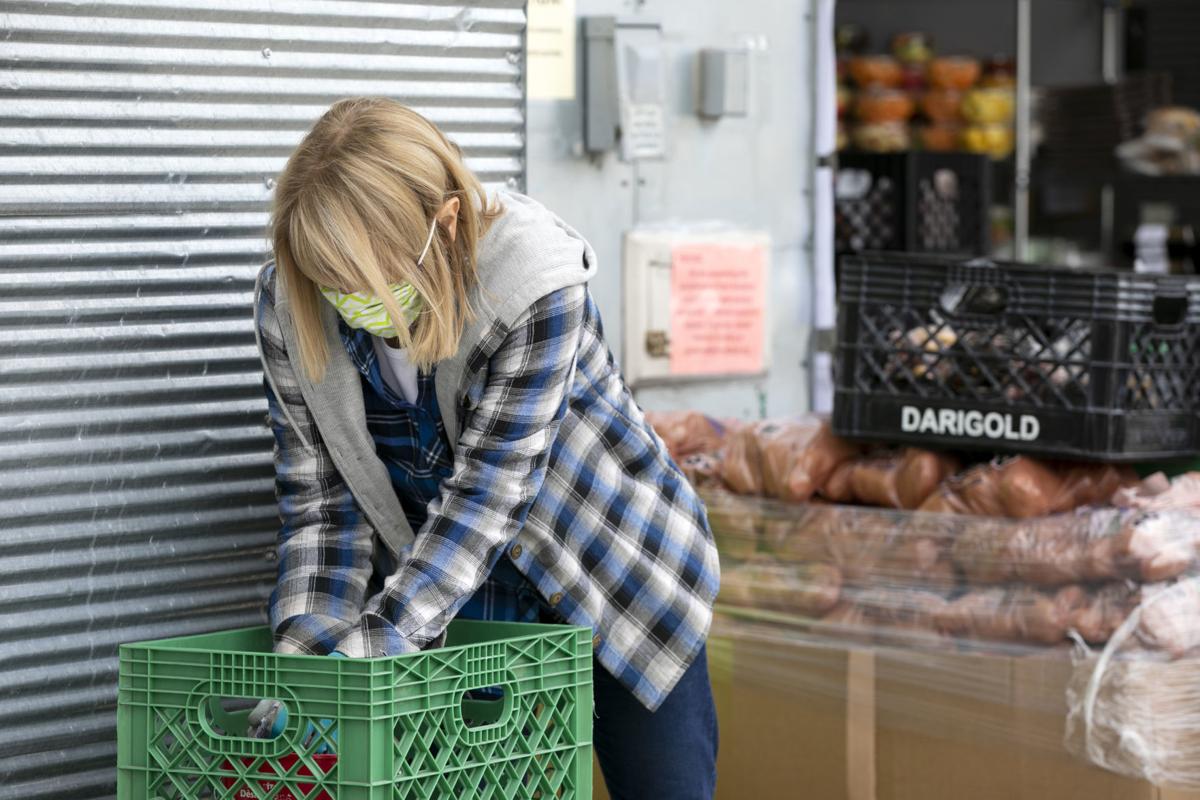 A worker at the Gallatin Valley Food Bank grabs a rag to sanitize the food carts being used Monday, April 6, 2020, at the food bank in Bozeman. Each cart was wiped down after every use. 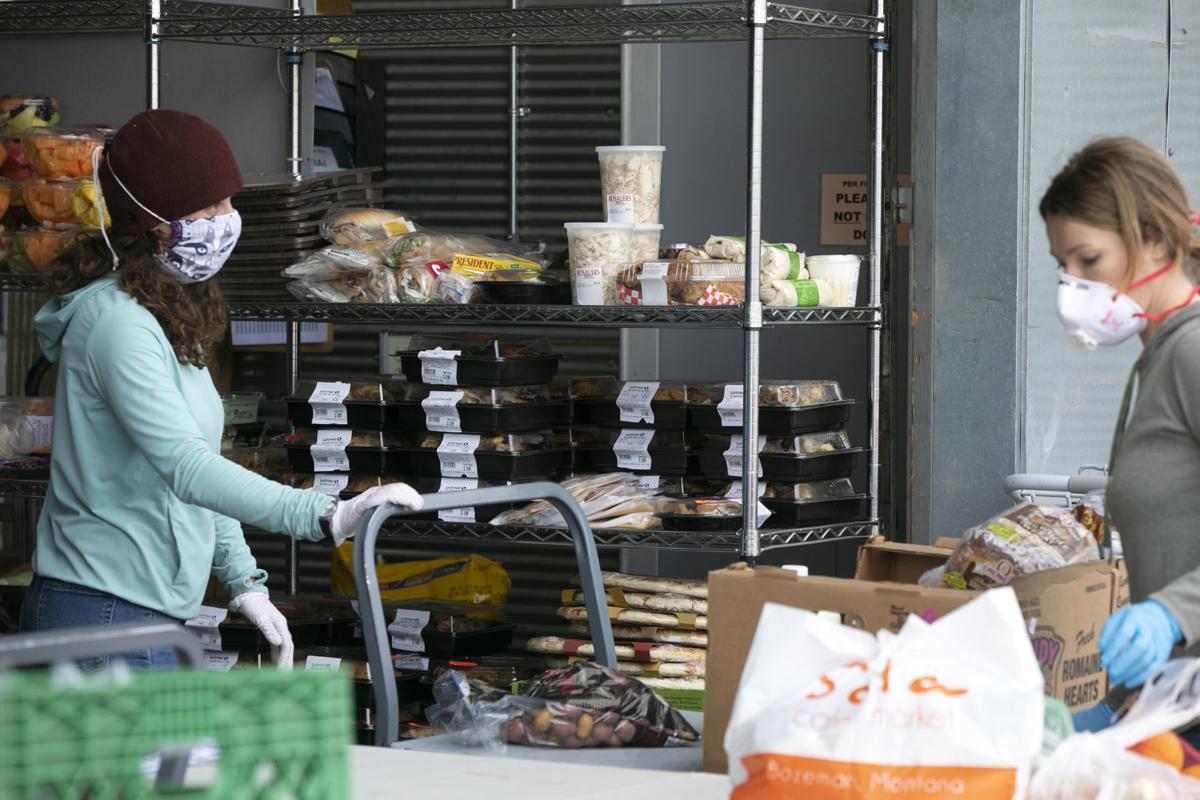 Workers at the Gallatin Valley Food Bank fill orders for people as cars pass through the drive-through lane Monday in Bozeman.

A worker at the Gallatin Valley Food Bank grabs a rag to sanitize the food carts being used Monday, April 6, 2020, at the food bank in Bozeman. Each cart was wiped down after every use.

Social safety nets in southwest Montana are seeing an increase in people seeking help after the novel coronavirus stalled thousands of jobs across the state.

A line of cars filtered into the Gallatin Valley Food Bank parking lot Monday as workers delivered prepared boxes of food to those behind the wheel. It’s a different scene than what existed just a few weeks ago when families wandered through the Bozeman location’s store-like shelves. And it’s just one example of how social services have shifted during the COVID-19 pandemic.

Human Resource Development Council President and CEO Heather Grenier said the food bank has seen a 70% increase in people tapping into the service over two weeks with an average of 76 households picking up food each day. There have been days where more than 120 families picked up a box.

Grenier said the last time the food bank saw that large of an increase was during the recession in 2008.

“We always see the first trend is a spike at our food bank, then you start to see it rippling out through all our other services,” Grenier said. “This is what we anticipated and were preparing for.”

Many of Montana’s more than 1 million residents are less than two weeks into an order from Gov. Steve Bullock to stay home, a directive that he said will likely be extended through April 24.

Montana had 319 confirmed cases of the virus as of Monday afternoon. Of those, 118 were in Gallatin County, the most of any county in the state. Nearly 7,000 people have been tested statewide.

The stay-at-home order, prodded by public health officials and repeated in states across the nation, has come with the message that the best way to stall the spread of this new virus is for people to avoid each other along with other precautions like washing their hands and not touching their face.

The state has expedited how fast someone can tap into unemployment and automatically lengthened people’s time on programs like food stamps. But Grenier said some won’t qualify for those services.

“There were already folks who were working and barely hanging on before this,” she said.

The economic shutdown has also put more people at risk of housing instability.

Last week, the governor suspended evictions during the stay-at-home order.

Christel Chvilicek, executive director of Family Promise in Bozeman, said she thought that suspension would protect people in the short-term. The nonprofit offers families temporary housing for up to 90 days. But more calls have come in nonetheless.

Some are from people who had housing connected to work — which they lost after they were laid off. Others were between housing or mid-move and the order to stay home meant the former tenants were staying put.

“There are just these very unique situations we weren’t even thinking about,” she said. “We’re anticipating more of an increase as soon as that shelter-in-place is lifted.”

HRDC launched an online platform that gives people a way to submit requests for help. A week in, the nonprofit had 215 requests that would cost roughly $37,000 to fill. Most of that came from people asking for rent or mortgage assistance. HRDC already spent its traditional pool of money for rental assistance this year before the epidemic reached Montana.

Before the pandemic, HRDC’s winter warming center saw an average of 55 people a night and the nonprofit worked with more than 100 families without housing, many who slept in their car.

HRDC stopped offering people a place to sleep weeks ago, saying the nonprofit couldn’t safely house guests amid the spread of the virus in its makeshift rooms filled with bunk beds and cots.

Warming center staff have worked with people to find a place to sleep, like connecting families to the organization Family Promise. HRDC also helped some people pay to travel to a family member they could stay with.

Those without any other options were given tents and outdoor gear.

HRDC is due to open another location with more space to separate people, but that won’t be ready for at least another two months. In the meantime, nonprofit and public health officials are working through options to find safer temporary housing, such as working out a deal with hotels.

The warming center has remained open during the day so people can shower, talk about what they’re struggling with and learn about resources available in town. The nonprofit has also continued to offer dine-out food at Fork and Spoon, its pay-what-you-can restaurant off North Seventh Avenue.

There has been more money directed toward vulnerable populations and housing on a national scale.

However, advocates have said that won’t be enough.

The National Low Income Housing Coalition released an analysis Monday that estimated the U.S. would need an investment of $76-to-$100 billion to keep the lowest-income households in stable housing over the next year during and in the immediate wake of the pandemic.

Grenier said the good news is with the influx of need, there’s also been a spike in donations to HRDC.

“The community has responded in a really tremendous fashion,” she said. “It’s just figuring out exactly how many dollars we’re going to need and trying to predict out the wave of this economic impact and what the long-term effects are going to be.”